10 Dads Competing For The 'Father Of The Year' Award

10 Dads Competing For The ‘Father Of The Year’ Award 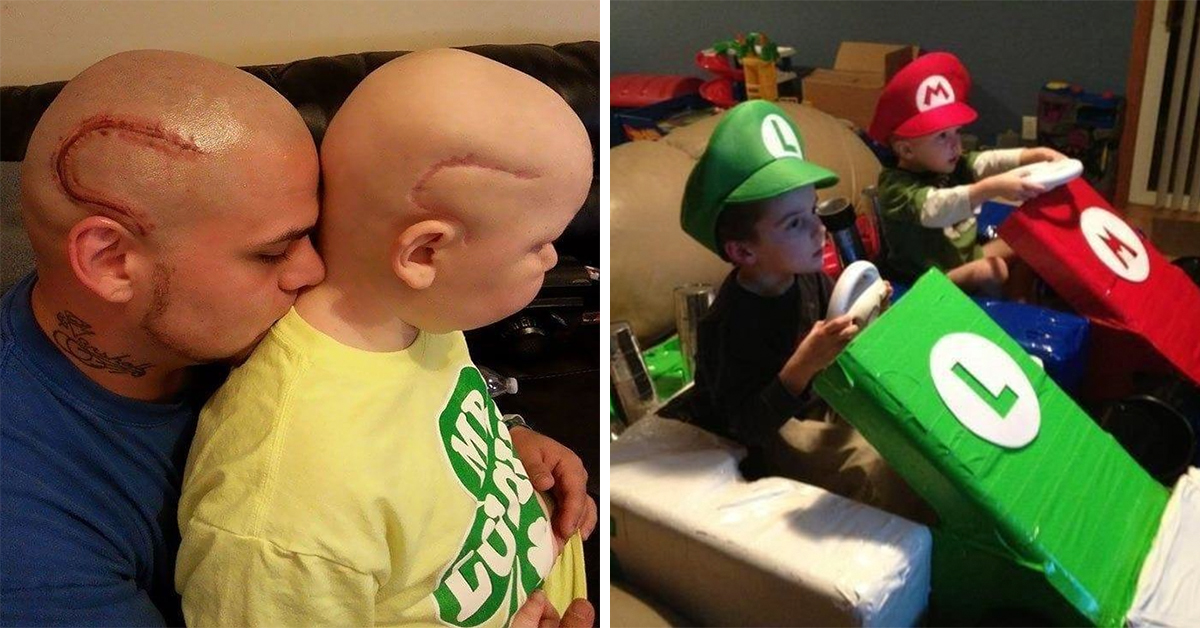 Being a parent isn’t easy!

When you’ve got kids, life can feel like it revolves around just getting to the end of the day without any major dramas. If you can do that then you feel like the day itself was a success, a real achievement. Kids can be a right pain in the a*s after all!

Ultimately though, most moms and dads would do anything and everything for their kids. Especially if it means they get the best possible chance to succeed in life and be happy, because you y’know… love them (yuck!).

We’ve all heard the saying “you live for your children”, well these dads took that statement literally and then some.

Take a look at these 10 examples of dads doing what they do best; being awesome… and sometimes freakin’ hilarious too!

Give these men a medal!

Sometimes as a parent, you’ve got to teach some tough lessons. But, words don’t always do the trick. Every now and then you’ve just got to lead by example. I bet this little girl will think twice before trying to wear something so revealing again…

This dads name is Rob Chillingworth (or should I say Elsa?) and he deserves a shout-out for accompanying his daughter Ruby (Olaf) to a fancy-dress party in an Disney princess outfit on a busy subway train. It’s worth mentioning that Rob is into heavy metal and owns a tattoo shop, but that didn’t stop him from releasing his inner-femininity so that his daughter didn’t feel silly dressed up on her own. Hats off to you sir!

This is just brilliant. I doubt these kids will forget this experience in a hurry, he’s pretty handy with the ol’ duck tape too. Sometimes you’ve just got to remember you were a child once upon a time, even if it feels like a freakin’ century ago!

4. This dad who finally upgraded his phone

There’s nothing quite like a ‘dad’ sense of humor. In fairness to him, Nokia 3310’s are basically indestructible so why waste money on a phone with a massive screen that shatters the first time you drop it? Plus, none of these modern apps will ever beat Snake.

5. This dad who got a matching scar to stop his son from feeling embarassed

Gabriel Marshall was just 8 years-old when he was diagnosed with a brain tumor. Despite successful surgery he said that he felt like a “monster because of the large scar left on the side of his head. So his father Josh decided to have an identical scar tattooed onto the side of his own head and told him “If people want to stare, they can stare at the both of us”. I’m getting all the feels here!

6. This dad who went brilliantly overboard gifting his daughters money

Sometimes it can also be the little things that make the difference between being a good dad and a great one. This guy knows what i’m talking about…

I wonder how long it took him to get a hold of that!?

It can happen to the best of us. I think nowadays most younger people would cross-reference with their friends to see what everybody else was wearing before going to a fancy-dress party. But not this guy, no no no. He doesn’t look too bothered anyway.

8. This dad who said everything his son wanted to hear

Coming out to your parents can feel like the scariest moment of your life. So when this dad overheard a conversation about it, he decided to step in first and make it known that he loves him regardless of what his sexual preference is. This guy truly belongs in the dad hall of fame.

9. This dad who gave his son a proper farewell party

Connor Harrison had sadly been diagnosed with cancer for the second time by his twelfth birthday. After the second diagnosis, his family was told that he wouldn’t live beyond a further 11 weeks… absolutely devastating news for any parent to hear.

His dad Scott wanted to take him to a car show as this was one of Connor’s last wishes, but unfortunately there were none near-by within the timeframe he had left. So Scott turned to the internet who in-turn provided him with 2,200 cars and over 4,000 people. Upsettingly, Connor later passed away. But, he was given one heck of a send off.

10. This dad who cross-dressed to help his son feel normal

Nils Pickert knew some people would stop and stare when his young son decided that he preferred wearing dresses and skirts to t-shirts and jeans. So in order to help him feel self-assured, he decided to join him. He has my respect because this must’ve taken some nerve!

Dads can sometimes be the unsung heroes when it comes to parenting. But these guys are certainly doing their bit to make sure their children are given the life lessons they need, with a few laughs along the way!

What did you think of these ‘hall of fame’ dads? Let me know in the comments!