10 of the weirdest TikTok accounts you can’t unsee 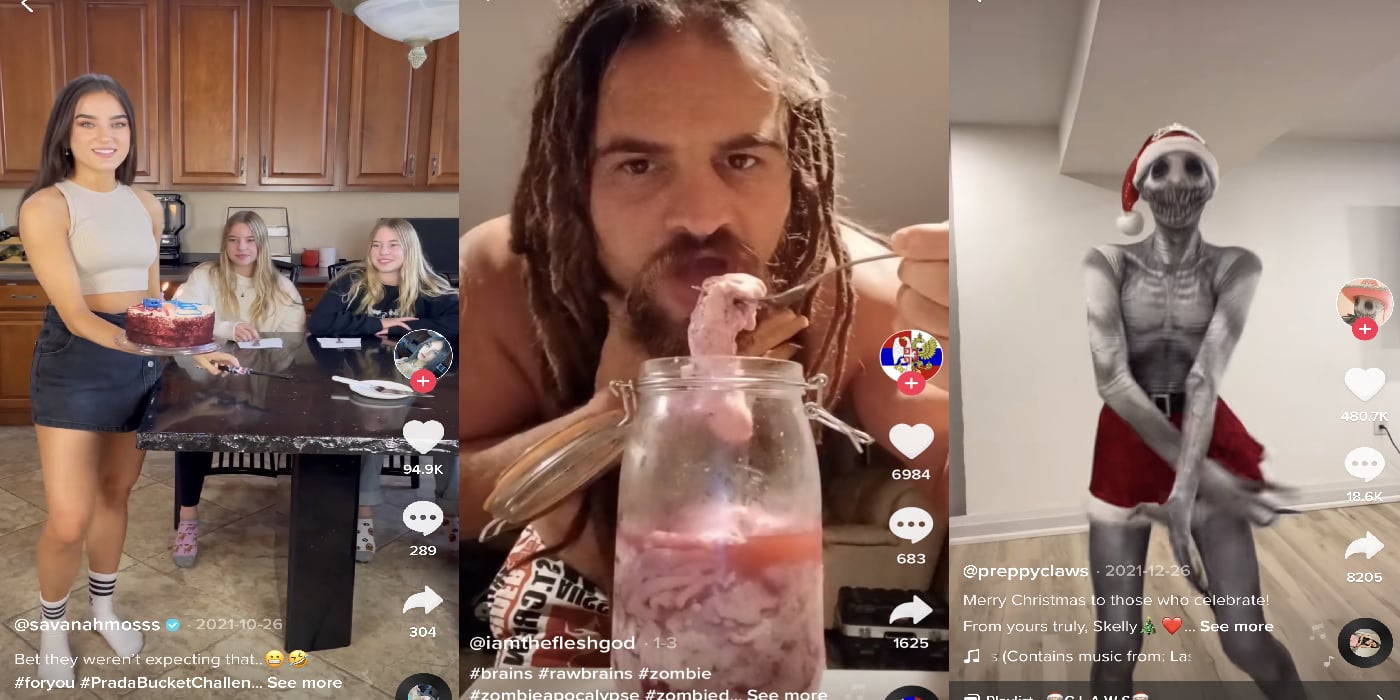 Throughout the 2010s, spotless and sun-kissed social media posts became the norm. If you weren’t in Dubai, or didn’t have abs, or weren’t sponsoring a celebrity energy drink, there was really no point in posting anything towards the end of the decade. And while that norm remains, more and more users – across platforms – are flirting with grittier, unfiltered feeds.

The attraction is clear: the majority of people in the world aren’t model influencers. They’re weirdos with weird interests and weird humour. Authenticity has always been a big buzzword among social media circles, but only in 2022 does it actually seem to be put to practise. Here are ten ones to check out ASAP: 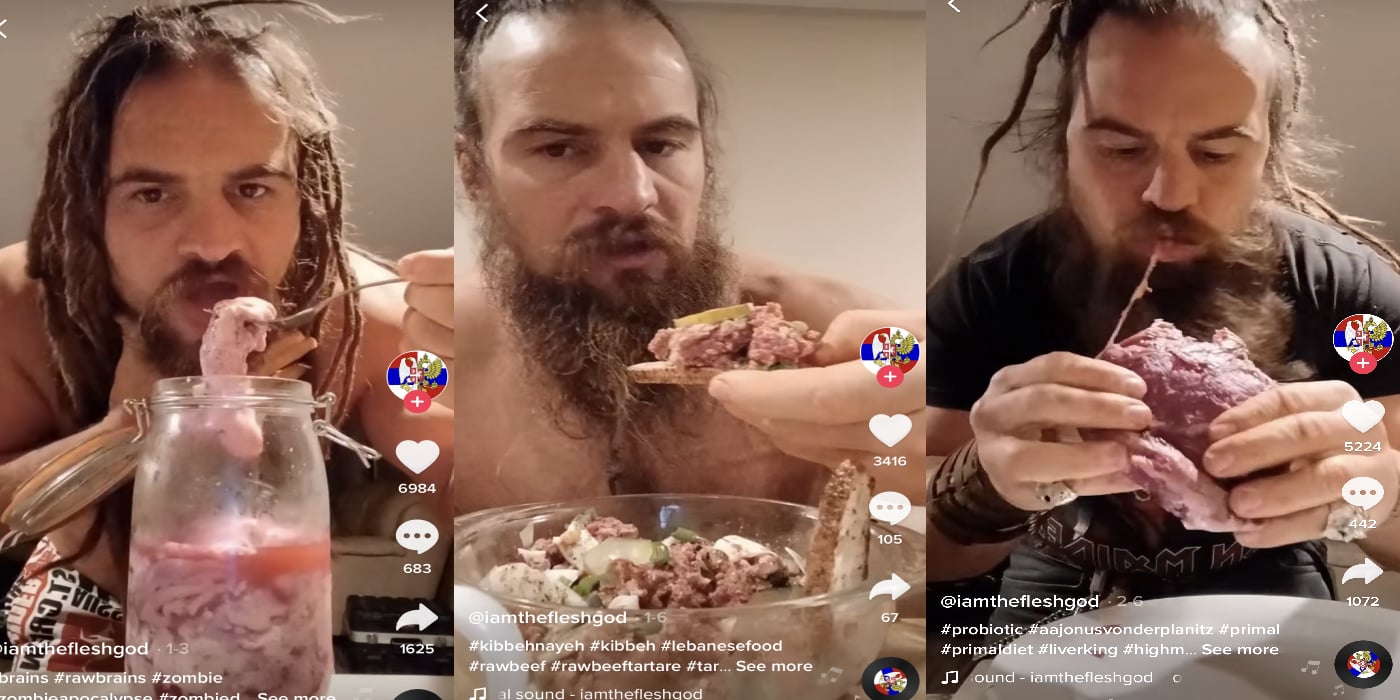 The name promises a lot, doesn’t it? There’s no way you don’t click on it. Over at @iamthefleshgod, the Flesh God eats the sort of things the rest of us spend our lives actively avoiding. We’re talking about raw meat. Raw everything, really. The Flesh God –  sometimes topless, sometimes sporting a Lakers jersey – tucks into these forbidden fruits like it’s no big deal. Like he hasn’t eaten in days. And it’s a sight to behold.

While the rest of the online world plugs branded water, turmeric smoothies and kale, the Flesh God devours what he hashtags as a #primaldiet or #zombiediet. In one video, he can be seen eating “raw brains” from a jar. Is it healthy? Hmm. “Contrary to the claims of many raw food fans,” Kathleen Selman MPH writes, “cooking does not make food toxic but instead makes some foods digestible. Cooking also boosts some nutrients, like beta-carotene and lycopene, and kills bacteria, which helps you avoid food poisoning. There is no scientific evidence that raw foods prevent illness.” Okay so, healthy? Probably not. Entertaining? Very. 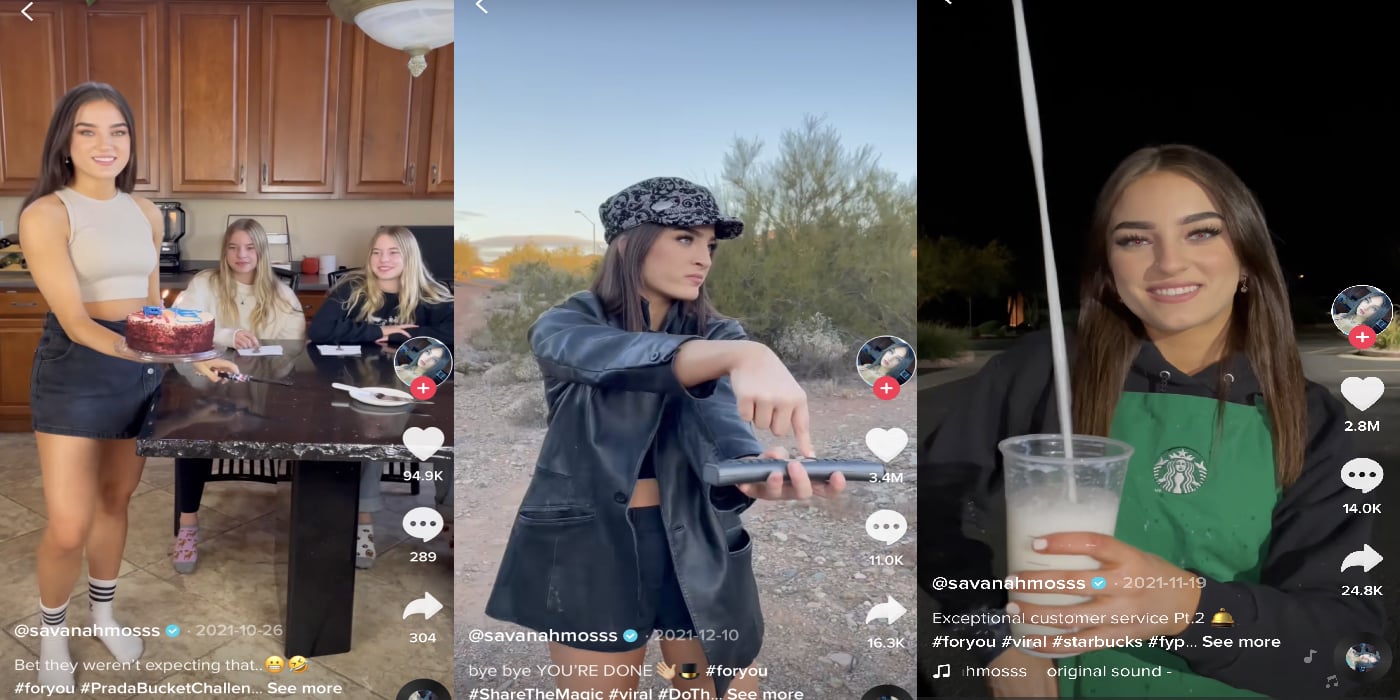 Conventionally good-looking women acting quirky is a social media trope as old as social media tropes. But if Savanah Moss was to ever utter the phrase “I’m not like other girls,” you’d understand why. Her videos are both actually funny and completely baffling. It’s hard to pin her down or give her a specific label, as the content she throws out is so varied and chaotic.

We can say this with certainty though: her following is massive. Moss boasts 9.2 million fans and a total of 178.3 million views. Like we said, there’s no way of explaining Moss’ videos in plain old black and white. You have to see them for yourself, and you should. Right now. Unless you’re busy. Actually, even if you’re busy. Drop what you’re doing and go watch. 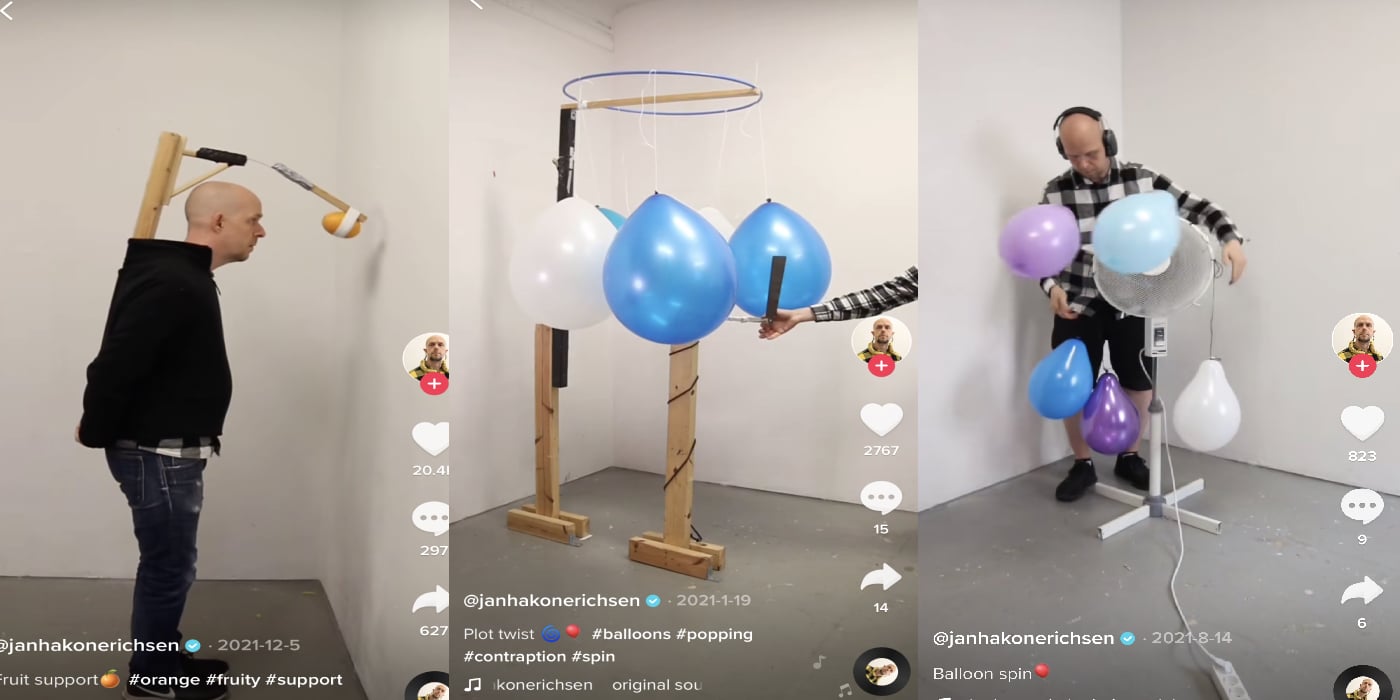 Thinking of inviting Jan Erichsen to your child’s birthday party? Think again. This guy will turn up with a plethora of medieval-looking weaponry and use them to pop every balloon in sight, in the most drastic, Rube Goldberg-way possible. The children will cry and you will have to answer for it. Jan Erichsen won’t care. He’ll already be out the door. This is just another day at the office.

Instead, enjoy him from distance through his TikTok account, where he does all of the above mentioned (minus the children). Watch on mute if you don’t enjoy loud noises. 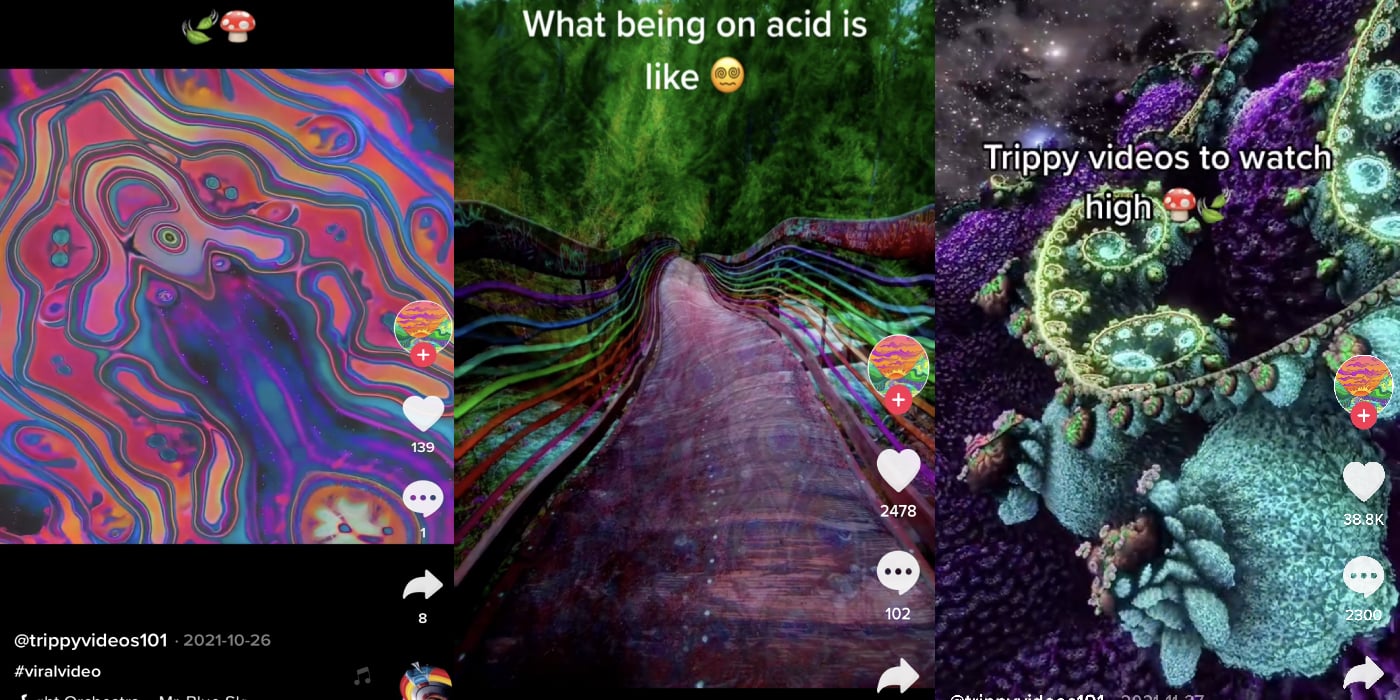 According to @trippyvideos101’s TikTok bio, they “do not glorify the use of drugs”. They do however offer the relaxing, jaw-dropping stimuli sometimes sought out by those who do take hallucinogenic drugs.

You don’t really have be under the influence of anything to understand why these videos might space you out if you were. They’re fluorescent and undefinable a lot of the time, like some real-time MC Escher painting. Up is down, down is up, right is left, left is right. You’d think this degree of distortion would be hell on earth but it’s pretty chill, especially with the sleepy piano backing music. 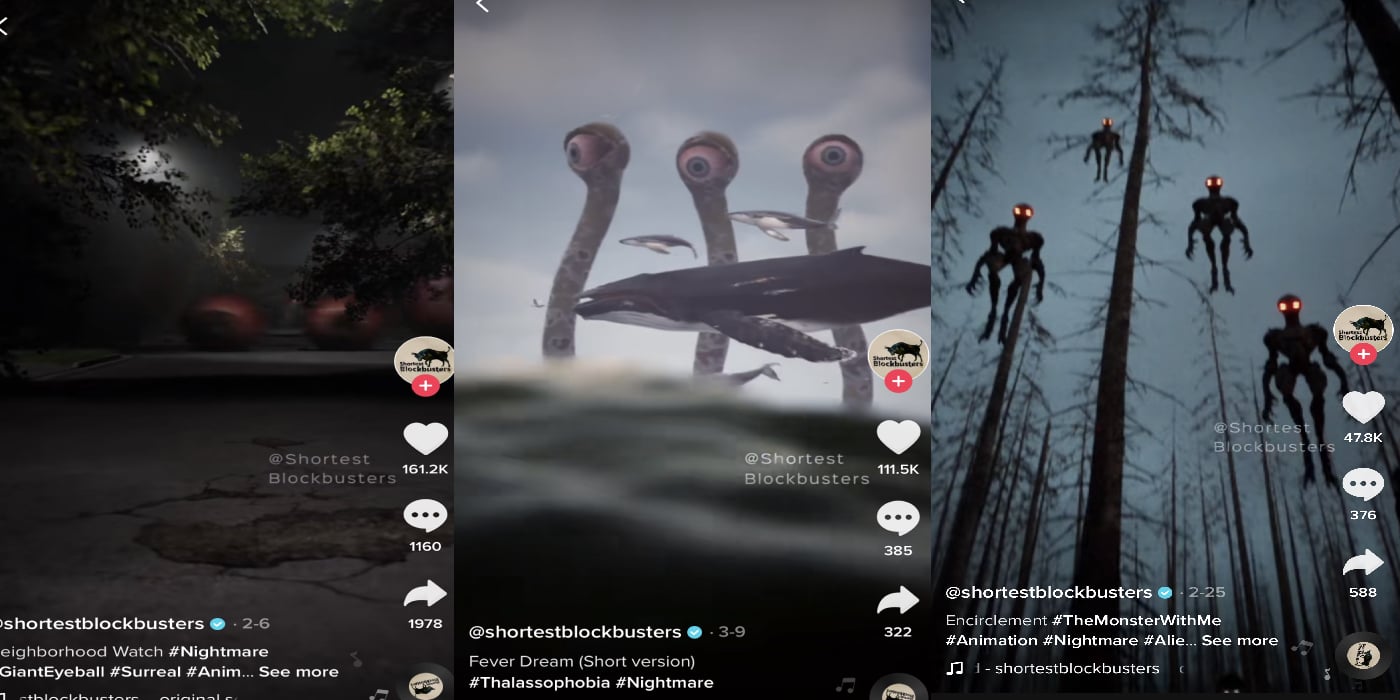 Over at @shortestblockbusters they make short blockbusters – arguably the shortest. So that’s a good start. Now, a lot of these things aren’t Marvel fodder: they draw more on imaginary creatures and desolate landscapes. In one video, a group of alien-looking droids drop from the sky to surround you in a burning forest. In another, a giant severed hand crawls through a neighbourhood at night followed by a gang of giant eyeballs. Pass the popcorn!

Not to get all Rotten Tomatoes on you, but the art direction at play here is pretty astonishing and well worth your time, regardless of whether horror is up your street. 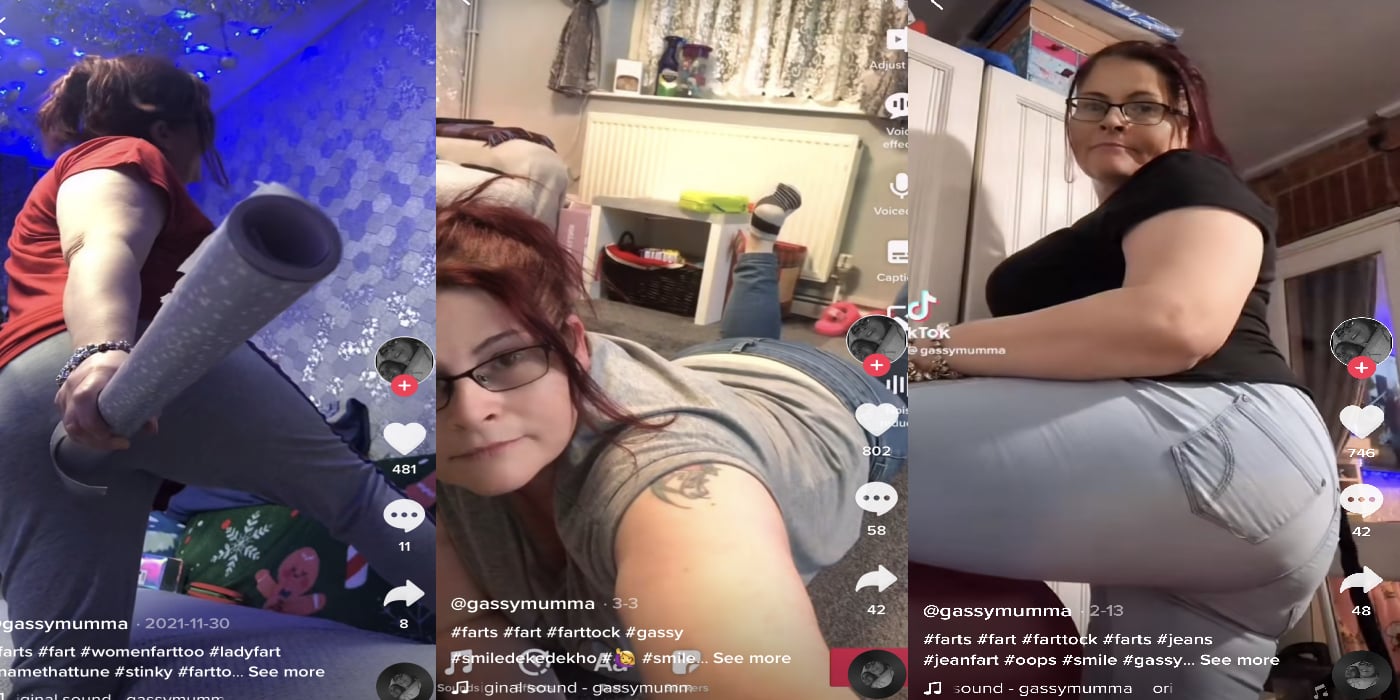 It’s odd. We all fart. We all find it funny. But when social media users decide to base content entirely around it, people suddenly get precious. They begin making out like they don’t like it or ever do it. Remember that guy who filmed all his farts while working that reception job, then got sacked? Tell me his employers didn’t enjoy his video.

@Gassymumma may have a humble 19.8k following on TikTok but her total views stand at 384.3k. How? Her content is consistent. She doesn’t stray or promote naff products (not that any conglomerates are likely to be knocking at her door). Gassy Mumma stands in her kitchen and farts. That’s it. That’s what’s up. Sometimes it’s one fart, sometimes two. Sometimes it resembles internet dial-up noises. Whichever you come across, it’ll make you smile… or throw up. 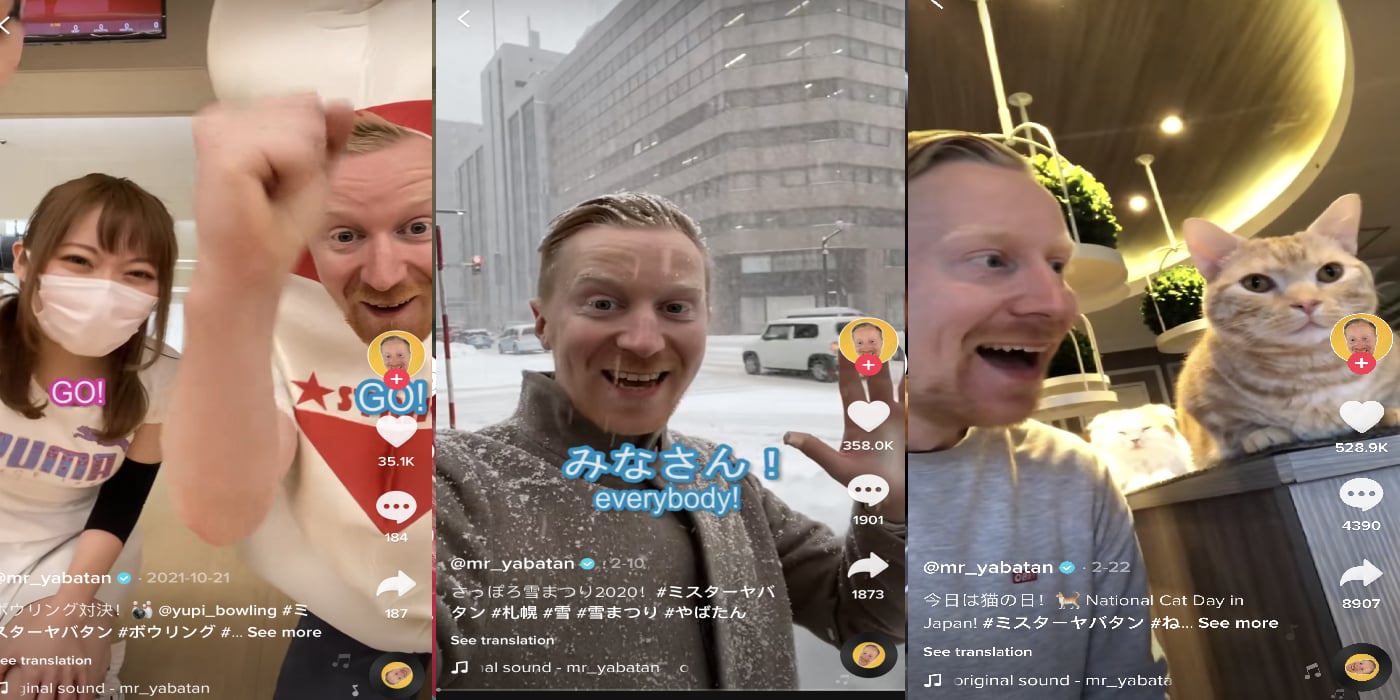 To a lot of westerners, everyday Japanese life can be a huge culture shock. In one house, you’ll find elderly people adhering to traditions that go back several millennia. In the next, someone will have a fridge that can tell you the exact date and time you’re going to die. It’s a ride, alright.

No one seems to appreciate this more than Yabatan, whose videos are almost always in Japanese and delivered with anime-style intonation. In them, he shares the fruits of Japanese eccentricity, from toilets to cuisine. 1.6 million followers can’t be wrong. 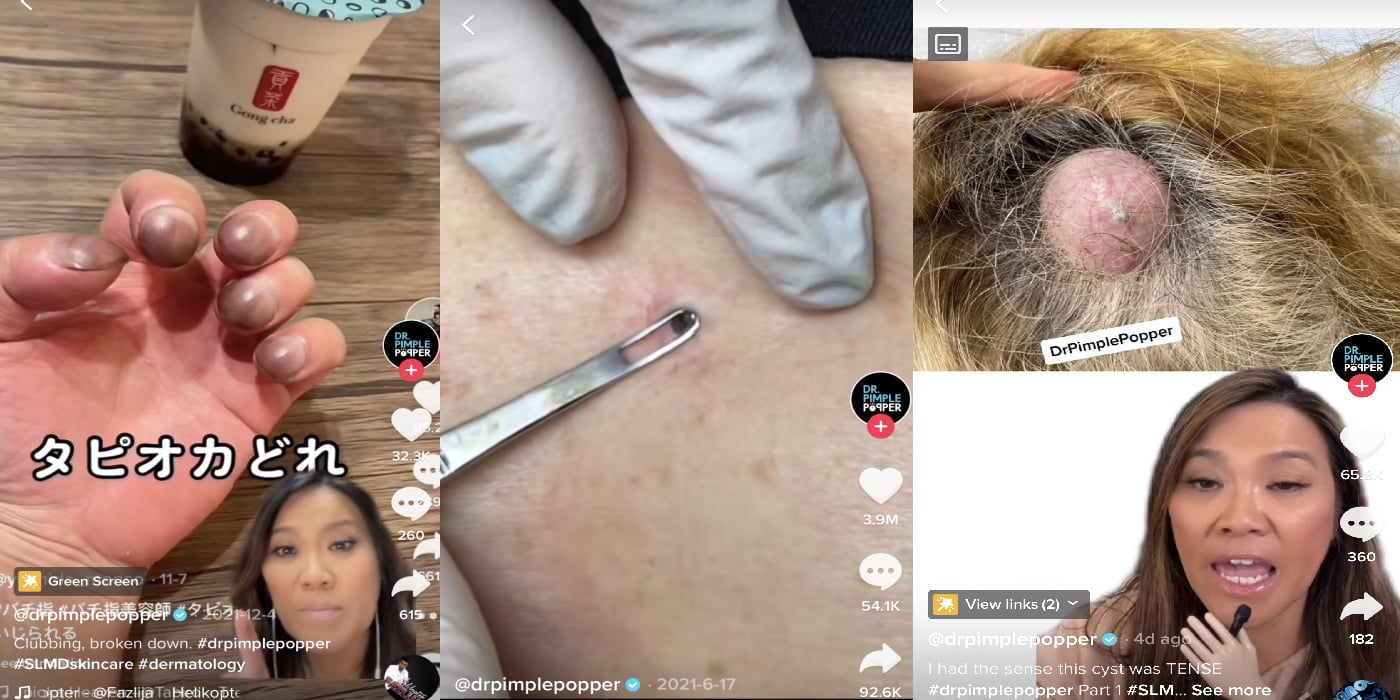 She runs the game, doesn’t she, Dr Sandra Lee? For years now, hopping between YouTube, Instagram and now TikTok, she has entertained the curious masses more than any other in the trade. That trade is pimple popping.

15.4 million followers tune in to see the latest footage from Sandra’s office as she frees patient after patient of facial pus. We’d love to describe a few videos for you, but it’s not really necessary. We all know the setup and we all know the payoff. For those that don’t, where have you been? What are you waiting for? 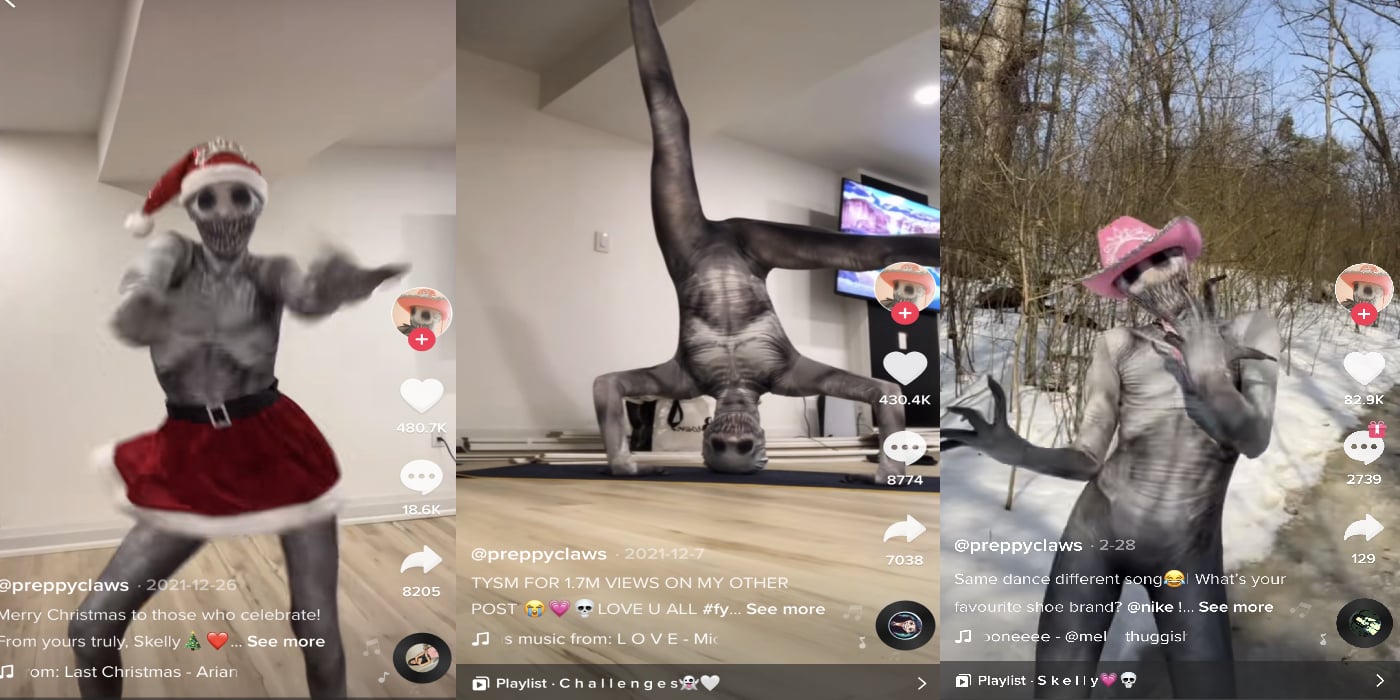 Whether they’re dancing in a snowy forest or in their house, there’s no dog in the fight for Preppy Claws. It’s just good vibes contradicted by a terrifying mask. Such is the influence of Preppy Claws, they’ve even inspired a copycat (who branches out even more on the locations). That’s a tune we can all dance to. 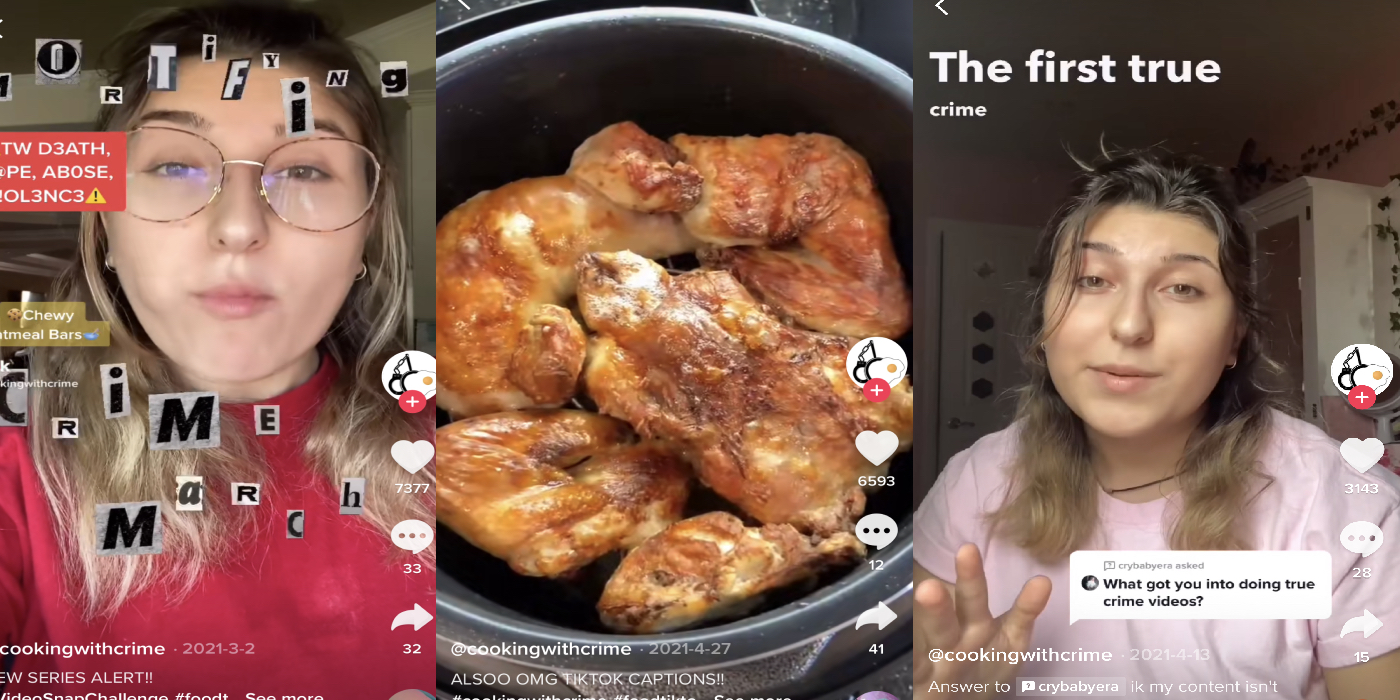 True crime may whet the appetite of your morbid curiosity, but it doesn’t whet your actual appetite. That is, unless you’re the visionary behind @Cookingwithcrime or any of her 240.6k followers.

@Cookingwithcrime combines a mukbang with true crime. In case you don’t know what a mukbang is, it’s a proven formula for any content creator. To do a mukbang is to eat large amounts of junk food while talking to the camera. It could be a ramble, or an interview, or just ASMR mouth sounds alone. The point is, they’re popular, and so are stories of real-life murder. Naturally it makes sense to eat triple-decker cheeseburgers while piecing together a homicide that occurred in 1996.