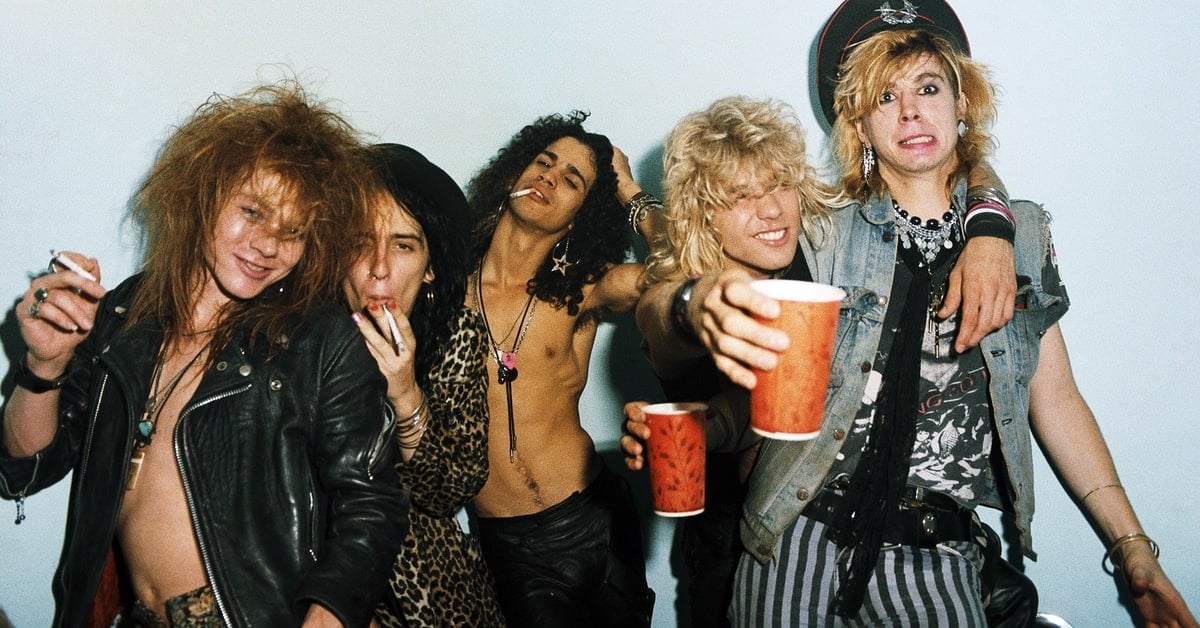 1) They Almost Died Before Being Signed

The group were involved in a serious car accident when they returned to Los Angeles after their first tour. The whole band were in a Toyota Celica when another car drove into the side of them at a junction, leaving drummer Steven Adler with a broken ankle. 2) Axl Assaulted His Neighbour With A Chicken

“I live next door to a psycho,” Axl Rose told a TV reporter after being released from jail for apparently assaulting his neighbor with an empty wine bottle. The same neighbour also accused the singer of throwing a piece of chicken at her. 3) Slash Ran Bleeding And Naked Through A Hotel Resort

After a heroin and cocaine bender, Slash recalls “Predators” with “rubbery-looking dreadlocks” chasing after him with “machine guns and harpoons”. Attempting to escape the creatures, Slash punched through a glass door, jumping through it to escape his room. A naked Slash then used a maid as a “human shield,” before running through the hotel lobby and hiding behind a lawnmower. Bowie paid too much attention to Axl’s girlfriend Erin Everly during one of the band’s video shoots, so Axl decided to punch the legendary singer. Apparently Bowie apologized and the two later went out for a long night of boozing. 5) They Turned An L.A. Alley Into A Den Of Filth Near the end of a show in St. Louis, Axl became angry when he spotted an unauthorized photographer in the front row, so he decided to try and take his camera, diving into the crowd and punching him before returning to the stage. “Thanks to the lame-ass security, I’m going home!” he announced, before storming off. Dozens of fans were injured in the ensuing riot, which resulted in the band being banned from St. Louis for life, and Axl being charged with four counts of assault, one of property damage, and fined $50,000. 7) Slash Turned His House Into A Zoo

Slash bought a new home in Los Angeles and filled it with venomous snakes, lizards, eight cats and a mountain lion cub named Curtis. “I installed a full-on reptile zoo over there,” he wrote in his autobiography. “Just a gazillion snakes and all kinds of stuff.” 8) Izzy Urinated On A Plane In Front Of Pensioners

During a flight from L.A. to Indianapolis, rhythm guitarist Izzy Stradlin urinated in the plane’s galley. He has said “I was drunk in the middle of this bunch of senior citizen types. I was smoking, and the stewardess came over. I told her to f*ck herself”. Axl and Kurt Cobain had already talked alot of bad stuff about each other before a backstage incident where Courtney Love spotted Rose and jokingly asked him to be her child’s godfather. As Cobain later recalled, Axl fronted up to him and snarled, “You better keep your wife shut, or I’m going to take you to the pavement.” After years of silence, Rose emerged in 1998 and made headlines for threatening an airport security guard. Apparently Axl didn’t want his bags searched and allegedly threatened, “I’ll punch your lights out right here and right now.”