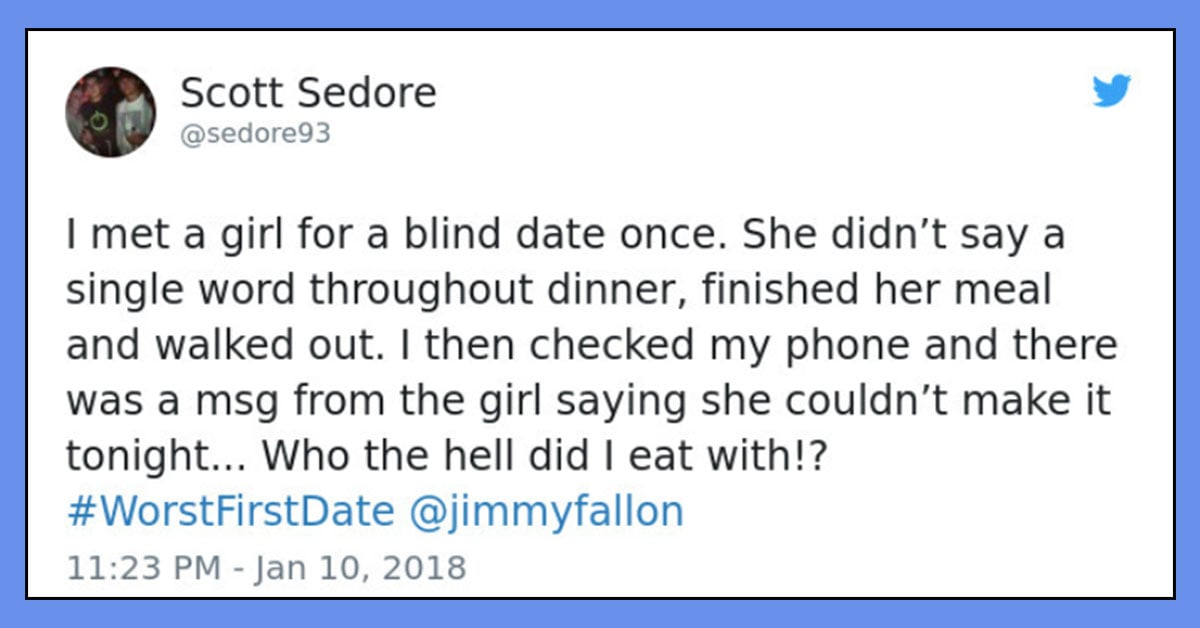 We’ve all been on at least one terrible first date, the kind that leaves you wondering whether it’s even worth dipping your toe back into the dating pool… Well, if you’re in need of a pick me up following a dating disaster (or just in need of a good laugh), we’ve compiled some of the most hilarious first date tweets.

From Tinder trauma to double-dating dilemmas, Jim Fallon’s call for people to tweet their awkward first date stories was an immediate success! They’ll make you cringe, they’ll make you laugh, they’ll make you question whether some men are a whole other species. Take heart, dear dater, and read on! If you’ve ever been stood up, this will make you feel better! This guy’s blind date took on a whole new level of unexpected when, after an incredibly awkward (and silent!) date, the girl he was supposed to be seeing texted him an apology for not being free that night. Who on earth did he have dinner with? Some people like men in uniform. Although, probably not when they’ve had a run-in with the law just hours earlier! This is one of those ‘can we start over?’ moments… This is totally why you should never do a home-based first date. Although, garlic aside, it seemed to work pretty well for this couple who’ve since been married for almost 30 years. That must be why they say that garlic is good for the heart! This one is seriously twisted. Who would think it’s okay to show up to a first date with a dead body in the back of the car?! I know he’s an undertaker and not a hit man or anything, but still… At least the guy in the coffin didn’t wake up halfway through the appetizers! That would have made a great story though. I feel for this girl. Embrace the sisterhood, friend. I distinctly remember the last time I told my girl friends about an awful date and one of them asked if I’d considered becoming a nun. It’s still on the cards… Wow. That’s impressively bad communication from that guy. The worst part of first dates is the whole ‘is this isn’t this’ thing. It’s fine to meet up for a while as friends, but if you’re going to a five-star candlelit affair, it’s probably time to say those ‘I like like you’ words. Oh boy. This guy is actual trash. Certainly no love lost there, you’re better getting out while you still can. You know, before he locks the car doors… But seriously, how do men still think this kind of crap is okay? Did MeToo not teach them anything?

So you think your parents are embarrassing when it comes to asking you about your love life? At least your dad doesn’t follow you on your date! How did this parent think it was okay to interfere so much? It sounds a bit close to the follow macho ‘lock up your daughters’ vibe for me. Seriously not on. Personally, I don’t think there’s such a thing as too much sushi. But we’ve all had that awkward ‘how much food is too much food’ on a date. Clearly two whole tables of sushi is a bit much. Although at least you gave your date a funny post-date story to amuse his friends…

10. Do You Think She Gave You The Wrong Address? I love a good inter-generational friendship in the making! I wonder if the guy and the elderly couple stayed in touch? And whether he ever managed to find his date’s house…

We’ve all had those embarrassing klutzy moments around our crush – dropping a full tray of food in the cafeteria anyone? But this is a whole new level of awkward. I’m not sure whether the Emergency Room does candlelit dinner-dates. *Sigh* Sadly, some men still expect women to be pretty airheads without any understanding of politics, science or religion and really can’t deal with a partner with her own ideas. I observed a great phenomenon during my time dating at university known as “competitive first dates” where men desperate to  score intelligence points against their dates: ‘so where did you grow up? And where do you stand on the principles of macro economics?’