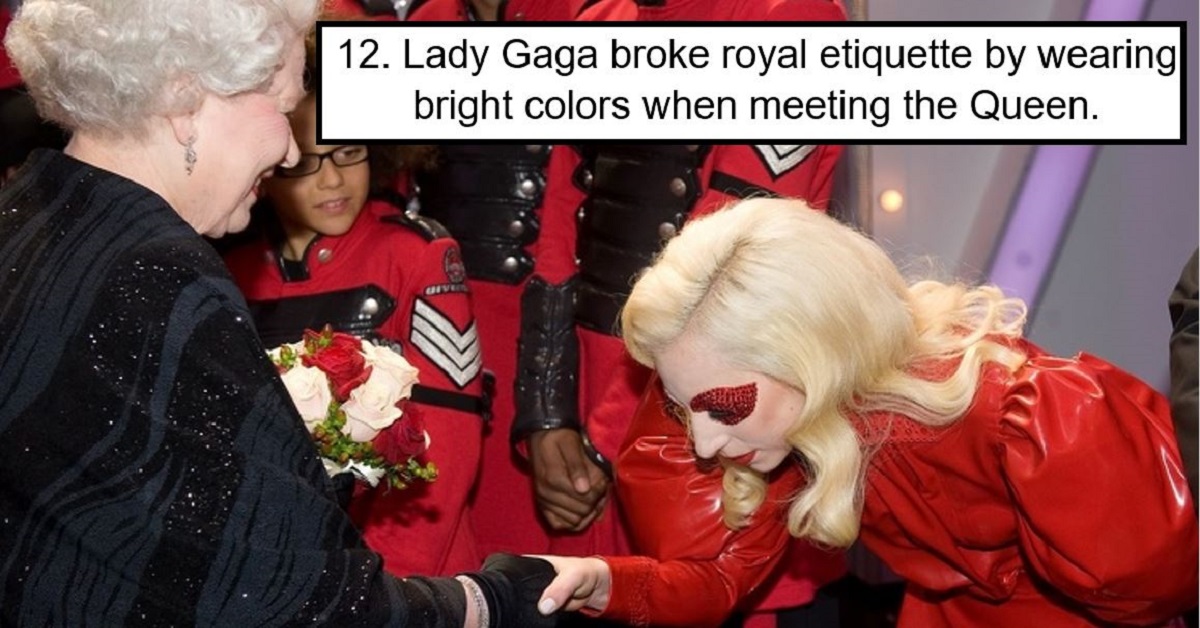 Meeting the Queen is probably amongst one of the greatest honors in the world, she has proudly sat on the English throne for 65 YEARS! She certainly knows her stuff and has been a huge influence not just in the UK but throughout the world.

The Queen certainly isn’t short of a huge personality either, she loves a good joke and can unwaveringly drink a glass of strong alcohol. She visits more than 400 events every year so many celebrities get the honor of meeting the Queen.

Even the most famous celebrities get nervous when meeting the Queen and it’s easy to see why some get so nervous they even forget proper etiquette! Yuri excitedly accepted the Queen’s invitation to have breakfast at Buckingham Palace. However, the Queen was the one to violate protocol by putting Yuri right next to her at the table.

When breakfast was served, Yuri admitted to having no idea what piece of cutlery to start with (I would 100% be the same…) but the Queen answered with, “I don’t know anything about them myself! Let’s just eat the way we like!” This is why the Queen is awesome!

Her Majesty was the one violating the rules at the end of the meeting by taking a picture with Yuri the astronaut, she responded with, “I took a photo with a man from space, not from our planet. So I didn’t break any rules.” The Queen is the coolest person ever. Marilyn Monroe only met the Queen once at a movie premiere, the actresses messy hair and revealing dress didn’t exactly fit royal protocol but the Queen didn’t seem to mind! The Queen and Marilyn were both 30-years-old when they first met, they were both born in 1926. The Queen didn’t actually recognize Madonna when they met for the first time! They met during the premiere of Die Another Day and Madonna was one of the big guests. Madonna was flattered to meet the Queen whilst Her Majesty was busy asking people who Madonna actually was! Helen Mirren portrayed Elizabeth II in the film, The Queen. She did a pretty good job too because not only did she win an Oscar but also the Queen loved it so much that she invited Helen over for dinner at the Palace. Helen shocked everyone by refusing as she was partway through filming!

They did eventually meet and The Queen wasn’t offended by Helen’s refusal. The President of Russia and his wife love stirring up controversy, this was absolutely no different when they met the Queen. Putin was 12 minutes late when meeting the Queen, this is a violation of etiquette as you should arrive early for the Queen. She repayed him by being 12 minutes late for their next meeting.

The Russian president’s ex-wife managed to violate etiquette too by wearing a hat wider than the Queen’s! Elton John first met the Queen in the 1970s when the Queen and Princess Margaret invited him to take part in a charity concert of The Prince’s Trust. Throughout the years John has been a frequent guest at Buckingham Palace and is considered a family friend.

Elton John was closest to Diana and recorded the song “Candle in the Wind” for her funeral again after it was originally recorded for Marilyn Monroe. It’s still the most popular single in the history of music. Kate Winslet was awarded with an Order of the British Empire thanks to her outstanding acting achievements and having raised 60 million pounds for the British economy.

She was incredibly nervous to meet the queen and described the experience afterwards, “First of all, she has amazing skin and hair. She congratulated me and asked me if I liked my job. I told her that I loved starring in movies but not as much as I love being a mother. The Queen said, ’This is your main job.’ And I thought to myself, ’What a nice lady she is!’” Boris Yeltsin was known for his friendly attitude and terrible etiquette when meeting the Queen! He took her hand twice and even tried to put his arm around the Queen’s waist which she deftly dodged.

The Queen did visit Boris again two years later and he broke etiquette once again when he tried to take off her coat, it is against etiquette to touch the Queen. The Queen knighted Benedict, famously known for his role of Sherlock. He was knighted for his acting achievements and for his amazing charity work.

After meeting the Queen he said, “It is fantastic. It is nerve-racking and nothing can prepare you for such an important event.” Simon Pegg met The Queen at the premiere of The Chronicles of Narnia: The Voyage of the Dawn Treader. The Queen actually cried during one of his scenes where he had to make an important decision. According to etiquette, monarchs actually aren’t meant to show their emotions so the Queen might have broken a rule here! David Beckham has met the Queen several times now but I’m sure it never gets old! Beckham has broken rules many times, during the wedding of Prince Harry and Meghan Markle, he was chewing bubblegum which is a big no-no…even I would know not to do that!

He also once asked the Queen if he could become a Knight, she didn’t say anything and he isn’t a Knight yet… Etiquette says not to wear bright, flashy clothes when meeting the Queen, clearly, Lady Gaga didn’t get the memo…in fact, she even was wearing an exact copy of Queen Elizabeth II’s dress but in red latex.

This was definitely a bold move but the Queen didn’t seem too bothered! Anna Wintour is the legendary editor of Vogue who sat next to the Queen during the Richard Quinn Fashion Show. The two seemed to get along just fine but many found it rude that Anna didn’t remove her sunglasses at all…

14.) Queen Máxima of the Netherlands It is very much against etiquette to kiss the Queen but it looks like Queen Máxima of the Netherlands decided to do what she thinks is normal. The Dutch are known for being touchy and even the Queen’s protocol wasn’t going to stop her!

So, what do you think about royal etiquette? Do you think it’s still important in the 21st Century? I know I would be a nervous, embarrassing wreck if I met the Queen! AAx