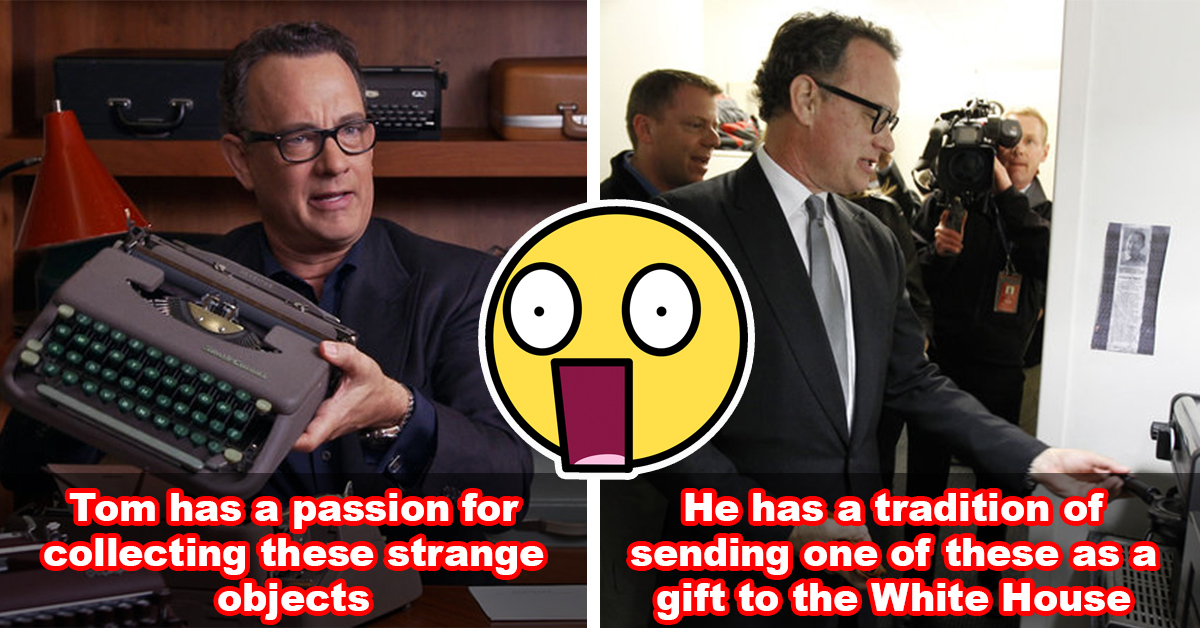 Tom Hanks is an Oscar-winning actor who is known the world over for his film portrayals in much-loved movies such as Forrest Gump (1994), Big (1988) and Toy Story (1995). He’s also taken on grittier roles, such as Captain John Miller in the epic World War II film Saving Private Ryan (1998) and Richard Phillips in the survival thriller Captain Phillips (2013), a role which saw Hanks try and survive a brutal hijacking by Somali pirates. Hanks has won a host of awards for his film work and has spent much of his 35-year acting career firmly in the public eye. He has been married to actress and producer Rita Wilson since 1988 and the pair currently reside in Los Angeles, California. However, despite his fame, there might still be some things floating around that you didn’t know about one of the world’s most famous actors! In the article below, we’ve compiled a handy list of 15 fascinating facts you might not have realised about Tom Hanks. Scroll down to find out more… We all know that Tom Hanks is a screen legend, but did you know that he’s also really into his football? Apparently Hanks is an avid follower of English footie and is a massive fan of Aston Villa! He’s been presented with a jersey by the club with the print ‘Hanks 1’ on the back and even attended a pre-season friendly at Portland Timbers in the summer of 2012. When they were relegated to the Championship, Hanks sent a televised message to his fellow Villa supporters and regularly makes sure to keep up with scores when he’s filming. So why Villa? Apparently Hanks just really likes the name! “Doesn’t it sound like a lovely place, Aston Villa? I had a lovely massage at Aston Villa….”

2. Hanks once worked as a hotel porter Before he made it big in Hollywood, Hanks had a number of jobs to keep him in food and rent. He once worked as a bellhop at the Oakland Airport Hilton in Northern California and carried luggage for a number of famous names including Cher, Sidney Poitier, Slappy White and Bill Withers. He also had a Saturday job as a teenager selling popcorn and peanuts at the Oakland Coliseum.

3. He’s lost and gained a lot of weight for some of his film roles Hanks is a dedicated actor who has previously put his body to the limit by dieting or gaining weight for a number of film roles. In the hit movie Philadelphia (1993) he played a HIV sufferer named Andrew Beckett and had to lose 30 pounds for the Oscar-winning role. Furthermore he gained weight and later lost a total of 55 pounds playing the lead role of Chuck Noland in Cast Away (2000), a film which follows the story of a man stranded on a desert island for months. Tom Hanks has won numerous awards and accolades during his stellar career, and on top of that he’s only the second actor to win back-to-back Best Actor Oscars. His first victory was for the 1993 legal drama Philadelphia, and then the next year for the classic film Forrest Gump (1994). The first actor to manage this particular success was Spencer Tracy, who won two Oscars for Captains Courageous (1937) and Boys Town (1938). Tom Hanks is obsessed with collecting typewriters and has purchased over 80 different models from around the world. In fact, he loves them so much that he created an idea for an iPad app called Hanx Writer, which simulates the sound and feel of antique typewriters. It was hugely successful and made it to the top of the Appstore list in August 2014.

6. His guest appearance on Happy Days ended up launching his acting career Hanks had a guest appearance on the popular sitcom Happy Days which ended up launching his stellar career in the world of film! Hanks starred briefly as Dwayne Mitchell, a character with a 17 year grudge against the Fonz who tries to pick a fight with the popular character. After this particular acting job, producer Ron Howard asked Hanks to read for a secondary role in Splash (1984). Instead, Howard was so impressed by the audition that Howard gave him the lead part instead!

7. His 1993 Oscar acceptance speech led to the creation of an entirely new film Hanks is so talented that even his Oscar acceptance speeches spawn films of their own! After winning the Best Actor Oscar for Philadelphia, Hanks thanked a gay teacher he had had in high school for inspiring him to shoot for the stars. This later became the plot of In & Out (1997), a film starring Matt Dillon about a famous actor who accidentally outs a high school teacher. The teacher than has to deal with the fall out from his parents, employers and friends.

8. He’s got excellent taste in movies Tom Hanks is used to rubbing shoulders with other famous faces, but did you know that he’s actually been good friends with Bruce Springsteen since they were young? Hanks moved around a lot as a child and got to know Springsteen in his youth – the pair would later work on the film Philadelphia together, with the Boss composing the iconic song ‘The Streets of Philadelphia’ for the movie. It went on to win an Oscar for Best Original Song and Four Grammys – nice work Bruce! Tom Hanks likes to use his social media for the good, and in 2015 he started using his Twitter account to upload photos of lost items (such as gloves, socks and shoes) along with their location in order to try and reunite the owner with their misplaced belongings. In at least one case, this action resulted in the lost property being returned to its owner – in October 2015, he found the Fordham College ID for a woman named Lauren, who went and retrieved it from his office in New York.

11. He’s acted alongside his daughter before Tom Hanks has four children – Colin, Chet, Elizabeth and Truman – nearly all of whom have delved into the world of acting at some point. With a father like Tom, it’s not hard to see why! In fact, Hanks appeared alongside his daughter Elizabeth in the award-winning movie classic Forrest Gump (1994). Remember the grumpy school girl who refuses to give up her seat to let Forrest sit next to her? That’s a young Elizabeth Hanks in her first onscreen role. Hanks has a strange habit of sending the White House press corps espresso machines and he kept up that tradition with the coffee maker he sent to them in 2017. However, this one had a special note attached to it that read: “Keep up the good fight for Truth, Justice, and the American Way, especially for the Truth part.” Sounds like fake news or alternative facts to us!

13. He was a member of Monty Python for one night only Tom Hanks was actually a member of Monty Python for one night! He is a huge fan of the classic series Monty Python’s Flying Circus (1969) and was approached by surviving group members to play one of the Canadian Mounties in the Lumberjack song during the Concert for George (2003). It was a special event held in 2002 to commemorate George Harrison on the first anniversary of his death, and Hanks can be seen at the bottom right of the chorus line belting out the classic Lumberjack song on stage!

14. Hanks has played a captain in five different movies Funnily enough, Hanks has played a captain in five different movies! He was an army captain in Forrest Gump and Saving Private Ryan (1998); a navy captain in Apollo 13 (1998); a ship’s captain in Captain Phillips (2013) and the captain of a plane in Sully: Miracle on the Hudson (2016).

15. Hanks has starred in 9 films that were Oscar nominated for Best Picture