17 Genius Ideas You'll Wish Every Hotel Had Thought Of!

17 Genius Ideas You’ll Wish Every Hotel Had Thought Of! 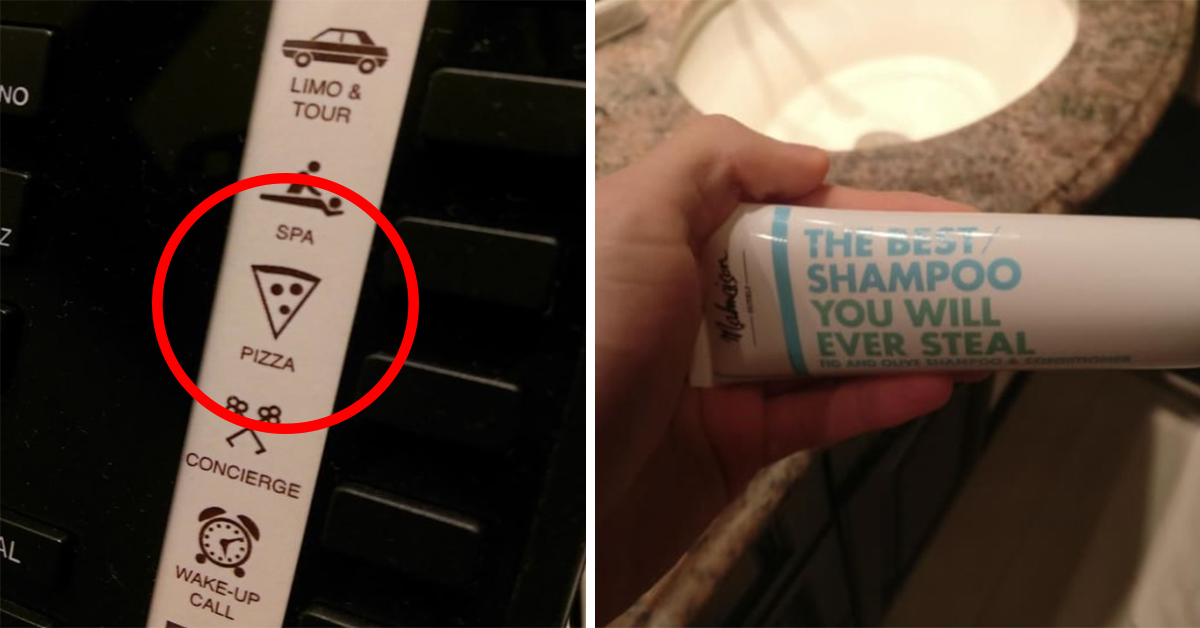 There’s something so exciting about leaving the world you know behind and venturing out into the unknown, albeit temporarily…

…That’s a fancy way of saying “we bl*ody love a good holiday!”.

The excitement of getting up in the middle of the morning, eager to set off the airport and start your highly anticipated holiday is almost too much. It’s probably the only time it’s actually acceptable to get up that freakin’ early too!

Any other day I can hardly be bothered opening my eyes…

You know the drill though, how many times does that excitement come crashing down when you finally arrive jet-lagged and fed up only to find out that the hotel you booked isn’t everything it claimed it would be. In fact, it’s lacking in basic amenities, the technology’s ancient and the customer care is non-existent.

Sometimes you find yourself stood at the front desk for ages, wondering if the people that work there have just given up and left.

If you’ve never experienced this then count yourself lucky. Either way, there are hotels that have decided to raise the bar and introduce some quick fixes and inspired ideas to make your stay that little bit more comfortable and stress-free.

Even if you’re not on holiday and you’re just on a work trip, visiting family or staying overnight on the way to somewhere…

This selection of pictures will have you thinking “why isn’t this everywhere?!”.

This is a puzzle enthusiasts dream, simply solve a Rubik’s cube and stay the night for free. Sounds easy right? Not for me…

This may be the greatest invention in the history of man-kind. ok maybe a slight exaggeration but the excitement of having pizza at the end of a single button is too much to bare!

3. Drunk showers are the best

Ever fancy an ice-cold bottle of bud and a nice hot shower at the same time? No, me neither… I’d much rather a glass of wine and a relaxing bath. But if you’re at a hotel and a shower’s all you’ve got to work with then having a bottle opener attached to the wall can come in handy.

4. Then when you get out and the mirror’s all steamed up…

Wouldn’t it be nice if hotel owners invested a little more into neat ideas like heated mirrors? Otherwise you can’t stare at yourself whilst you’re in the shower… I mean get ready quickly afterwards.

5. Why not just put a TV in there whilst you’re at it

This is some seriously futuristic stuff, well in my eyes it is anyway. Handy when you’re getting ready to head out and you need to check the weather. Remember those days when you went and looked outside the window? Pfft, that’s a thing of the past now.

6. Mirrors are getting smarter

Even if you’ve left the room already and forgotten to check your mirror TV for the weather, this hallway version’s got your back.

There are few things worse than losing your expensive phone whilst on holiday, or anywhere for that matter. Well this hotel has decided that it might just be easier to leave your tech in the room and use one of theirs instead. It’s acts as a fully functioning phone/camera and means you haven’t got to worry about leaving it in the restaurant bathroom. Unless of course they charge heavily for losing it…

8. One for the germaphobes

If you’re a little high maintenance when it comes to general hygiene then this hotel has thought of a great idea: providing fresh untouched remotes. Well, I presume they are just cleaned rather than actually being new. But, it means you’re not touching everyone else germ hands when you change channel. Winner!

9. Piece of mind is always nice

And whilst we’re on the topic of cleanliness, this hotel decided that placing a sign under the bed would eliminate any fears you might have that the room hasn’t been cleaned thoroughly!

10. Sometimes the simplest ideas are the best

I refuse to believe no one has thought of this until now. This curtain rail is designed to allow the curtains to crossover, eliminating that annoying strip of light seeping in that blinds you at 6am. Now sleeping in until the afternoon is a breeze.

Hotels obviously know we steal the toiletries, it’s hardly a secret. But rather than make us sweat, this hotel has used it to their advantage and put it on the products themselves. Just to show they have a sense of humour too.

12. Aren’t you forgetting something?

Just in case you’re in a rush when leaving, this hotel has provided a handy card to remind you of all the important things you don’t want to leave behind. Including the toiletries of course.

13. Hate waiting for the elevator?

This hotel decided to put the button for the elevator halfway down the hall, so that by the time you reach the doors it should have arrived. I can’t work out whether this idea is genius or completely pointless…

If, like me, you’re very particular about the height and firmness of your pillow/s at night then you’re in luck. This hotel’s pillows are labeled by softness so you can guarantee the perfect nights sleep!

This place takes things one step further and allows you to choose the actual material inside your pillow. Because, well why not?

Turning the water on and getting your hair drenched when you weren’t planning on washing it is freakin’ infuriating! So why not place the shower knob on the opposite wall to the shower head like this hotel? Simple.

That golden rope dangling just inches from your face happens to turn on and off all the lights in the room simultaneously. I could do with one of those at home!

Some pretty neat ideas there. Hopefully this is just the beginning in a hotel revolution of ingenious inventions because let’s face it… anything to make our lives easier is a plus. Do you find yourself regularly stealing hotel toiletries? I definitely don’t… Ok maybe I have once but they’re free right?

Let me know what you think in the comments Acidheads!