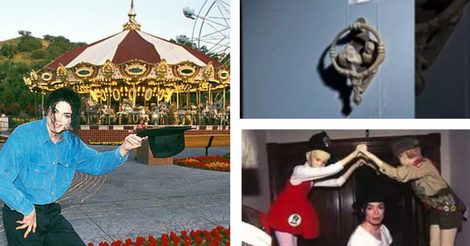 The King of Pop sold millions of albums, and his success earned him enough money to be able to create his own paradise which was even decked out with his own theme park – which he named after the fantasy island where Peter Pan and his lost boys live.

The 3,000 acre property held plenty of entertainment, it’s own zoo and concert venue – to navigate the huge plot of land he actually had two fully functional passenger trains.

However, as fantastic as this all seems, prior to his 2005 trial, police raided his estate – and what they found was a combination of weird and downright creepy. And this list holds only 17 of them… Dolls this realistic are unsettling enough as it is, without the added fact that they could be put in whatever poses or positions that Jackson wanted.

2. A door knocker with two boys kissing on it It’s not even the fact that it’s two boys – a door knocker with anybody kissing on it is just strange!

3. Statues of half naked boys 4. A drawing of Michael with a whole group of kids I wonder where he’s taking them.

5. His own gold throne Although let’s be honest, if you could own a gold throne just for you, you totally would! Again, creepy by default, but I wonder how often he used it… And what it said. These would be cute if it weren’t for the barely-dressed children statues accompanying them. Child at heart, I guess. To keep the elephants company, of course. It was essential. I wonder who he played with? Just in case there were two trains-worth of visitors.

Once again, a little creepy by default – and catered for children. Especially disturbing in this picture in the dark… Although going to a private show would be pretty cool. To go with the elephants and the giraffes – duh. We have a feeling this place never gets boring.