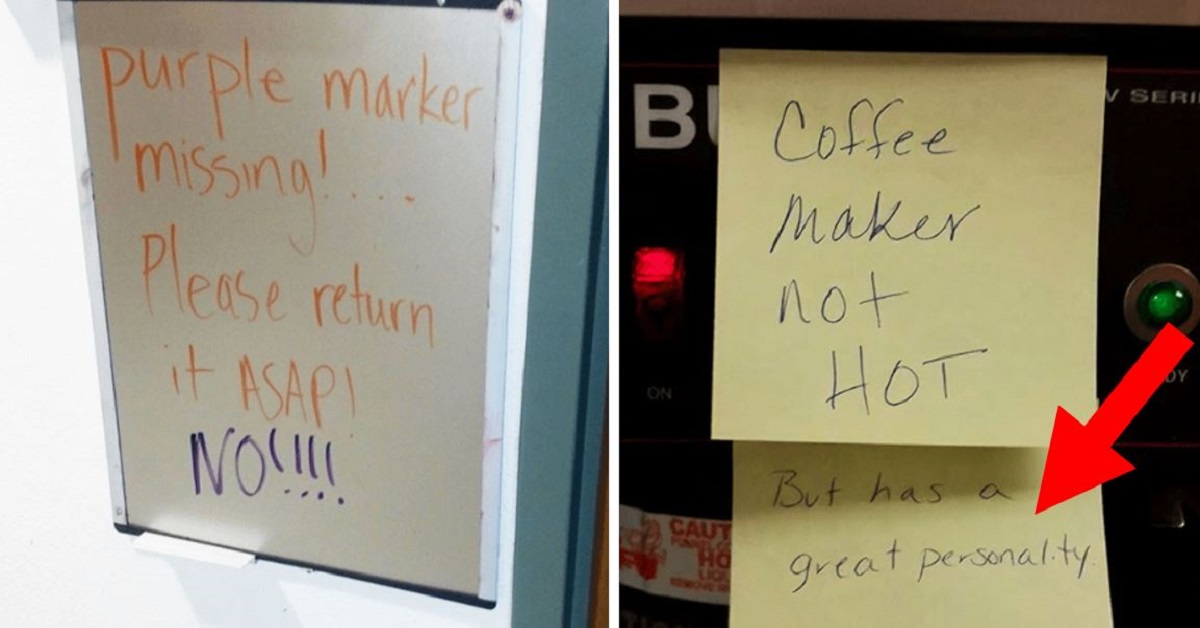 Public notices tend to be passive-aggressive signs that layer on the sarcasm and basically tell you to do things that you either don’t want to or know that you should do. Either way, most of the time you probably ignore them or roll your eyes at them.

However, sometimes people have had enough of these notices and have decided to fight back. Well, it’s either that or they have far too much spare time on their hands.

Whether it’s funny one-liners and far more elaborate responses, these people have put these public notices back into their place, in the bin! Next time you are trying to think of a sassy response to your co-worker’s passive aggressive note, try the below for some inspiration…

1.) Getting rejected by food cans You know life is going pretty rough when you are getting rejected by food cans. I’m not sure why this public notice is encouraging people to date cans, it isn’t going to be a healthy relationship!

2.) Returning to the scene of the crime This legendary pen thief decided to return to the scene of the crime and deface this notice. I can appreciate the bravery and defiance, I hope that he never returned the pen. Now, this note was just RUDE. I’m glad someone defended the coffee maker and it’s brilliant personality because that’s all that really matters! This person is clearly just a little bit bitter about their greedy ex. I can completely relate though as with everyone else with an ex probably does. At least this machine was warning people before leading them on! Wow, this person clearly is a deep thinker. It is true though, maybe that printer is there just a little more temporary than this person is though.

6.) This mug has been violated This office worker was just asking for trouble when they posted a note like this in the kitchen. Seriously though, who is that protective over a mug?! There are more important things in life than your reindeer mug, Janice.

7.) Who actually would lock the restroom… Yes, people who throw paper towels in the toilet are incredibly annoying. Does this justify locking the toilets so no one can use them? NO! I’m glad this person fought back, peeing on the floor might be a little too dramatic though.

8.) The food thief is hiding in plain sight Seriously, guys, it’s so unreasonable. Put some new, interesting food in the fridge for this mysterious food thief! This guy has an insane appetite and I can admire that. Now, the government might want to explain their way out of this one…maybe Coke  Zero DOES have sugar in it and it’s just one big conspiracy. Trust no one folks. This office seems…close. If a little clingy at that. It seems as though no one can leave their desk without everyone FREAKING OUT. I wish people would miss me this much… Come on, Comic Sans is the DEVIL of fonts, why would you ever willingly choose to use that?! All in capitals as well, this person has gone wrong in so many ways. This company makes a manger approve your postings, which seems pretty impossible if you ask me! Which is why this person hit back.

15.) Everyone should feel sorry for this poor door I feel sorrier for this door than I have ever felt before. I wonder who scared this door? That person should be very ashamed of themselves.

16.) This graffiti just got roasted I completely agree with this person’s response to this terrible graffiti. It truly is shocking to look at and a disgrace to that wall. Whoever did this needs to try much harder next time.

17.) A very Alaskan sense of humour The slower the co-worker you go with, the more chances you have to survive as they will be caught by the bear first. Sounds like a great plan! I would NEVER remove such an adorable and innocent looking seal. If anyone ever does, they are going to regret it. Never spell a word wrong on a public notice, there is a HIGH chance that you will immediately be roasted!

20.) Everyone loves a ninja turtle reference This is just such a perfectly timed and well done reference. I am so annoyed that I didn’t think of it myself!

I don’t know about you but I want to deface and make fun of every single public notice now! Which one was your favourite? Let us know in the comments!