A definitive guide to the most popular TikTok dances so far 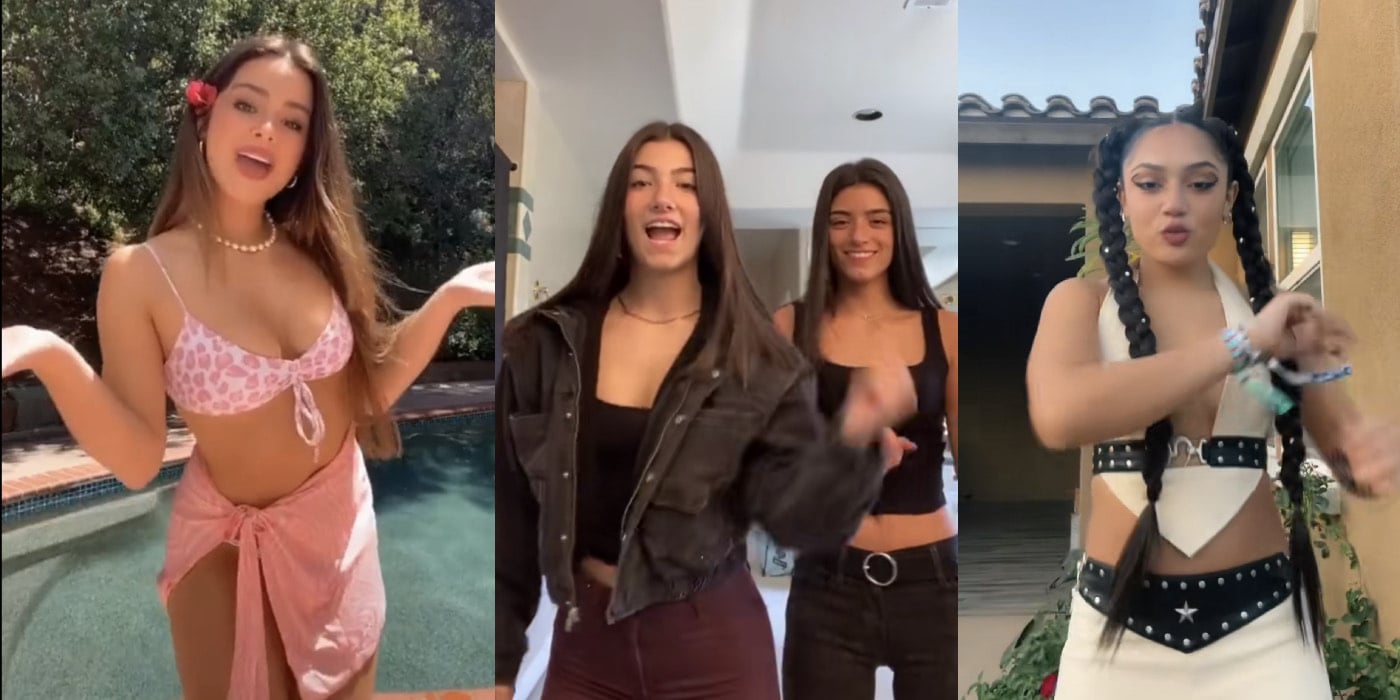 Stop any teenager in the street and ask them what the Renegade is and they’ll probably do the dance for you, right there, like a trained monkey, such is the power of the TikTok Dance Challenge. Don’t actually stop random teenagers in the street, though. Hypothetically this would probably happen but you’d also look a bit weird. The point remains, TikTok dances have swept the younger generations like a tidal wave.

TikTok dances have an influence over today’s trends and pop culture. TikTok creators across the world are getting signed to management companies while TikTok choreographers are being asked by highly-respected artists to promote their songs on their accounts. Doja Cat even invited a TikTok user to star in her video for “Say So.”

Without dances, TikTok wouldn’t really be what it is. Stop any adult in the street and ask them what the renegade is, they’d probably say, “Oh, is that that thing from the uh… the dancing video app? With all the kids?”

We’ve compiled a list for you to look through on some of the biggest and trendiest dances ever to hit TikTok. Some you’ve likely seen, some you maybe haven’t… 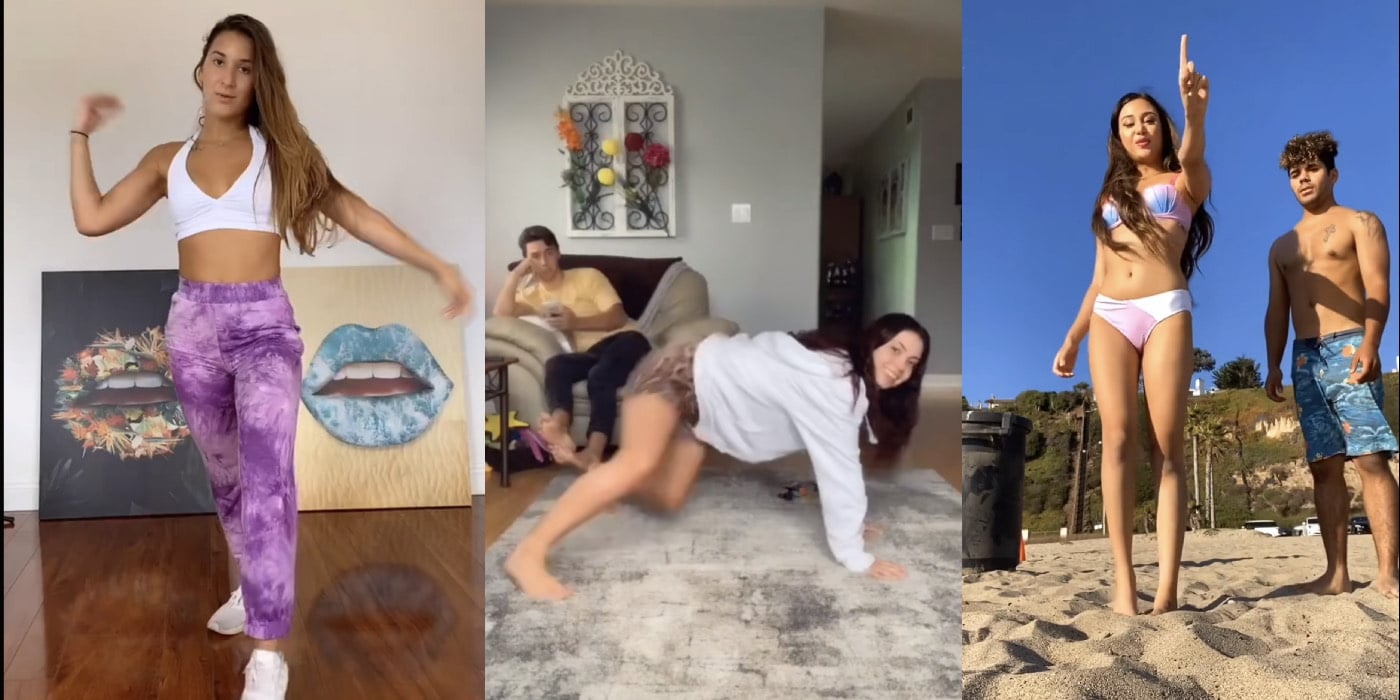 Barely two years after it came out, it’s easy to forget just how much outrage Cardi B and Megan Thee Stallion’s 2020 single WAP caused. Political commentator Ben Shapiro got so worked up over it he accidentally admitted his wife had never gotten wet. The hate was trumped by love in the end. Social media embraced WAP like an old friend, skyrocketing it to TikTok virality. On top of the meme that saw people layering Megan Thee Stallion’s “gobble me, swallow me” verse of the song over everything from The Phantom of the Opera to Let It Go, there was a huge dance challenge created in its aftermath.

The dance to Cardi B’s ‘WAP,’ choreographed by Brian Esperon, was at the peak of its power in August 2020. The raunchy dance set to a raunchier song was an instant success among TikTok users, and it quickly spread across the platform. TikTok sars like Addison Rae went viral for their take on Esperon’s dance. 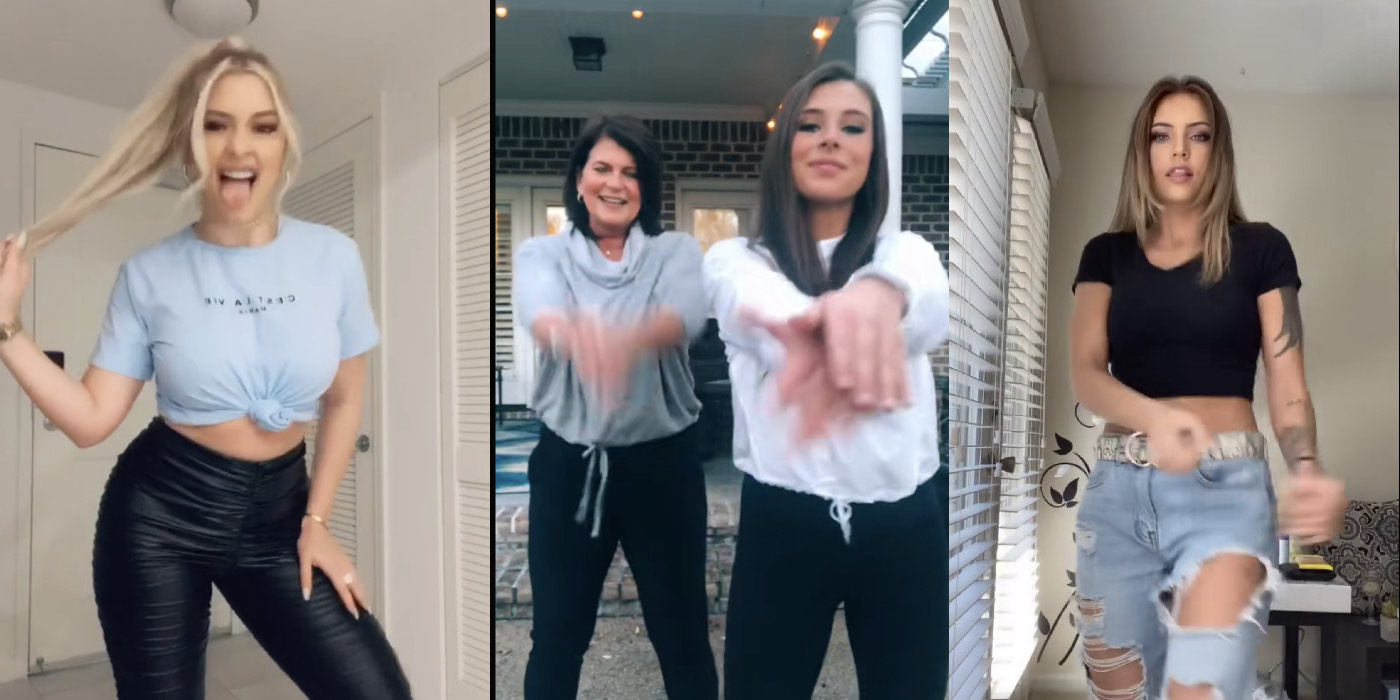 Megna Thee Stallion didn’t settle for just one TikTok dance craze in 2020. Prior to WAP, her song Savage was all over the app like a rash. It’s dance challenge, choreographed by Keara Wilson remains one of the biggest to ever hit the platform.

You might Wilson’s choreography even if you didn’t take part, such was its popularity. With its front-facing clap to its hip sways to its body rolls, the Savage sound has been used in 26.8 million videos. 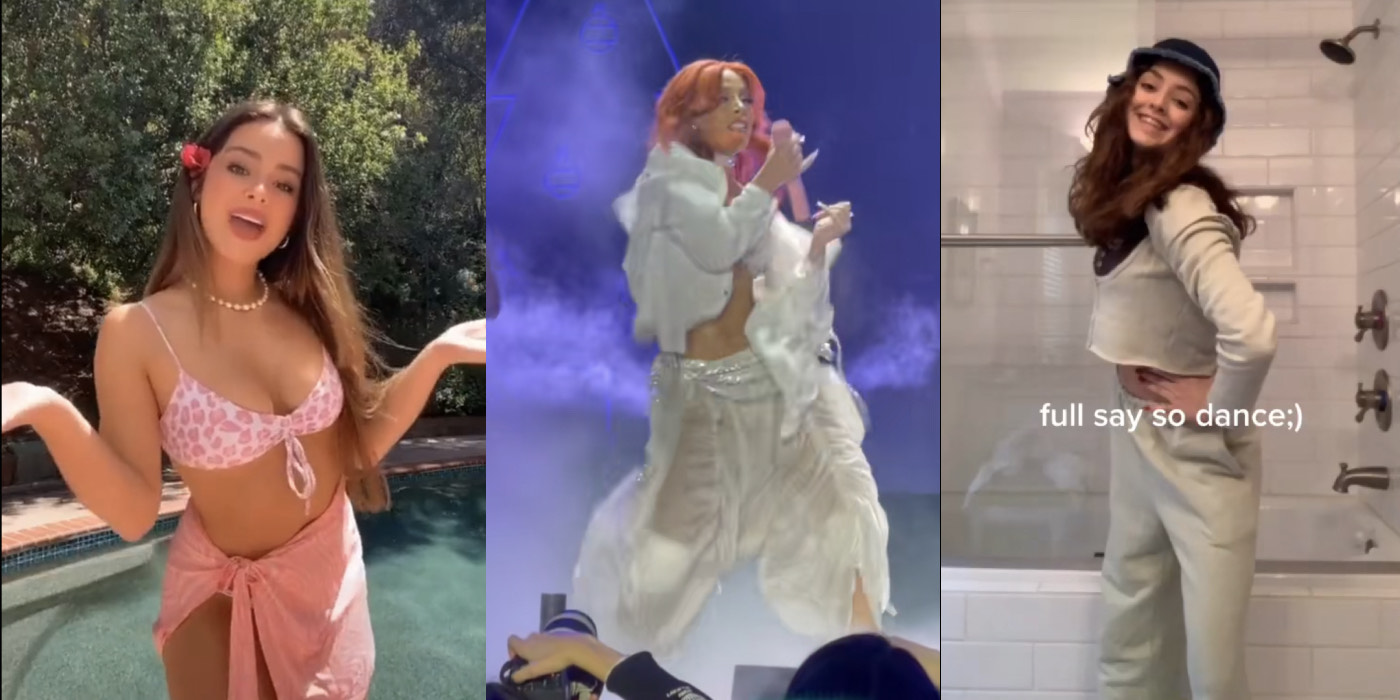 Doja Cat’s Say So was big prior to its TikTok dance. Initially peaking at number four on the US Billboard Hot 100, two remixes featuring rapper Nicki Minaj propelled the song to number one. The track earned a Guinness World Record for becoming the first female rap duo to top the Hot 100, also earning both artists their first number-one song in the US. It also sent it viral.

TikToker Haley Sharpe created a dance that eventually more than 16.8 million people attempted. Sharpe said in her caption to Doja Cat that she’d love to be in a future music video. Doja Cat invited Sharpe to perform it in the music video that dropped in February. Sharpe’s own TikTok received 923,000 likes. 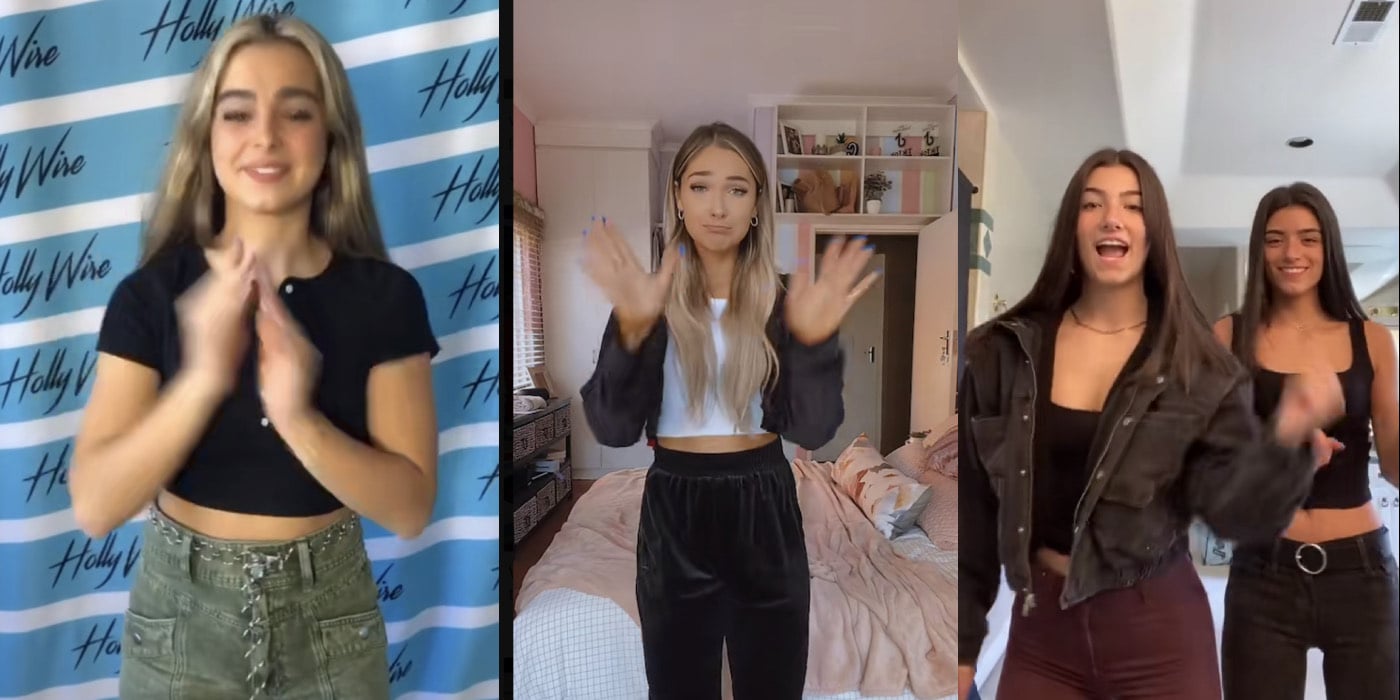 Far and away the most popular dance on TikTok with over 29.7 million users having a shot at the fast-paced choreography, “the renegade” took the world by storm. Created by Atlanta-based teenager Jalaiah Harmon in September 2019, the challenge blew up with middle school students. Set to the song Lottery by K Camp, Harmon’s broke out from the confines of TikTok and is now performed in talent shows and at school pep rallies.

Harmon originally posted it to Funimate and then Instagram with friend Kaliyah Davis. When it made it to TikTok, she collaborated with Addison Rae and Charli D’Amelio to teach them the Renegade. 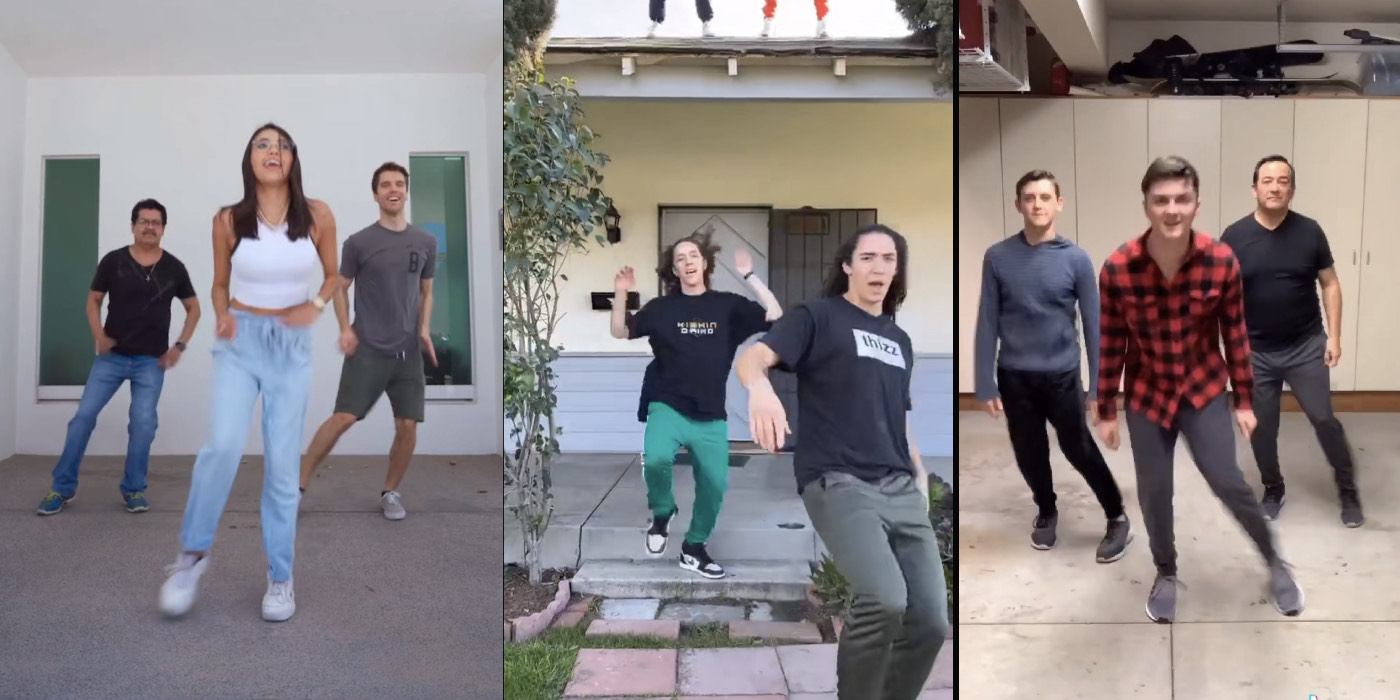 The Weeknd isn’t someone you usually associate with viral dance crazes but when he released Blinding Lights in 2019, it quickly became the inspiration for a challenge unto its own.

Creators over at @macdaddyz hit the jackpot with their choreography for the tune that involves looped leg kicking. This dance became so popular even entire families for getting in on the action, proving that the Blinding Lights Challenge is quite literally a song we can all dance to. 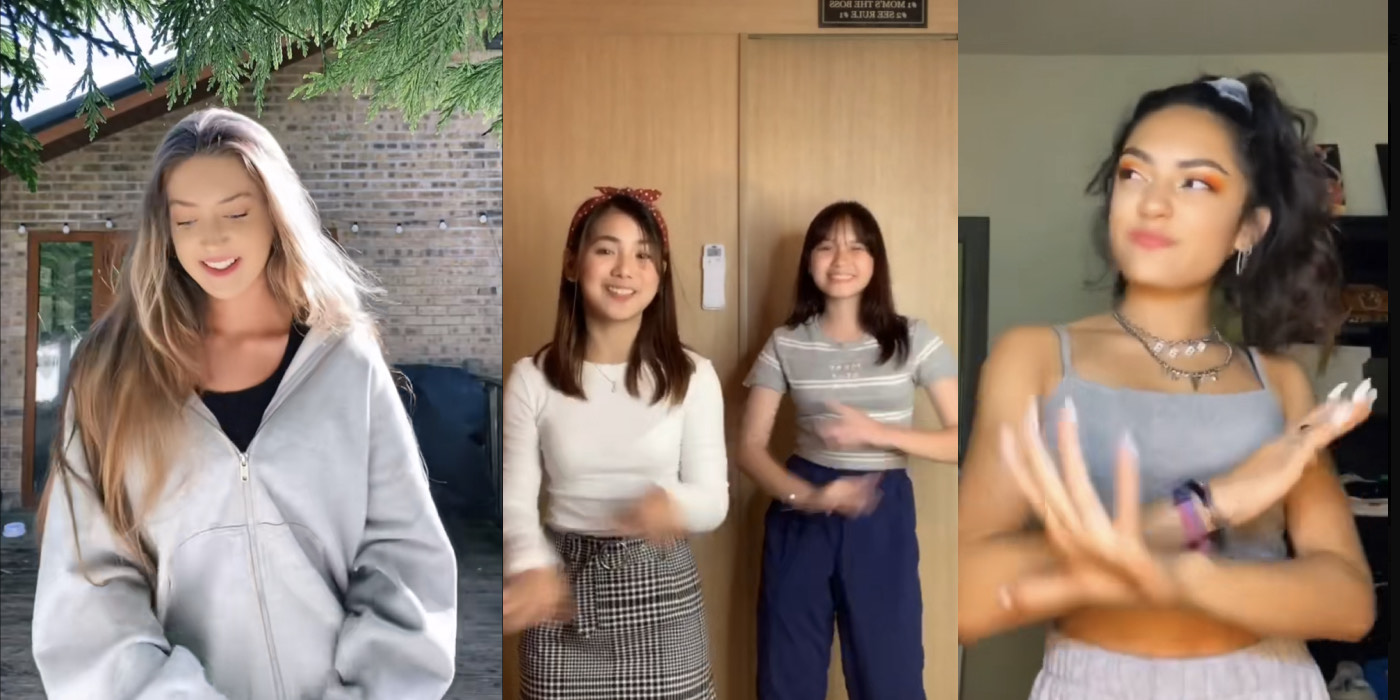 Ask any seasoned TikTok user what “Number One Baby” is and they’ll likely bust out into a dance routine that revolves around a few simple hand and arm movement, ending in holding an invisible baby.

Almost as popular to the renegade, Number One Baby is set rappers Young Thug and Future’s tune, Relationship. Around 27 million people have dance to the lines, “had to take the time to cut ’em off, I need help/I know how to make the girls go crazy/When you treat her like your number one baby.” A certified banger as well as an endorsement of parenthood. Very classy touch from Young Thug and Future. 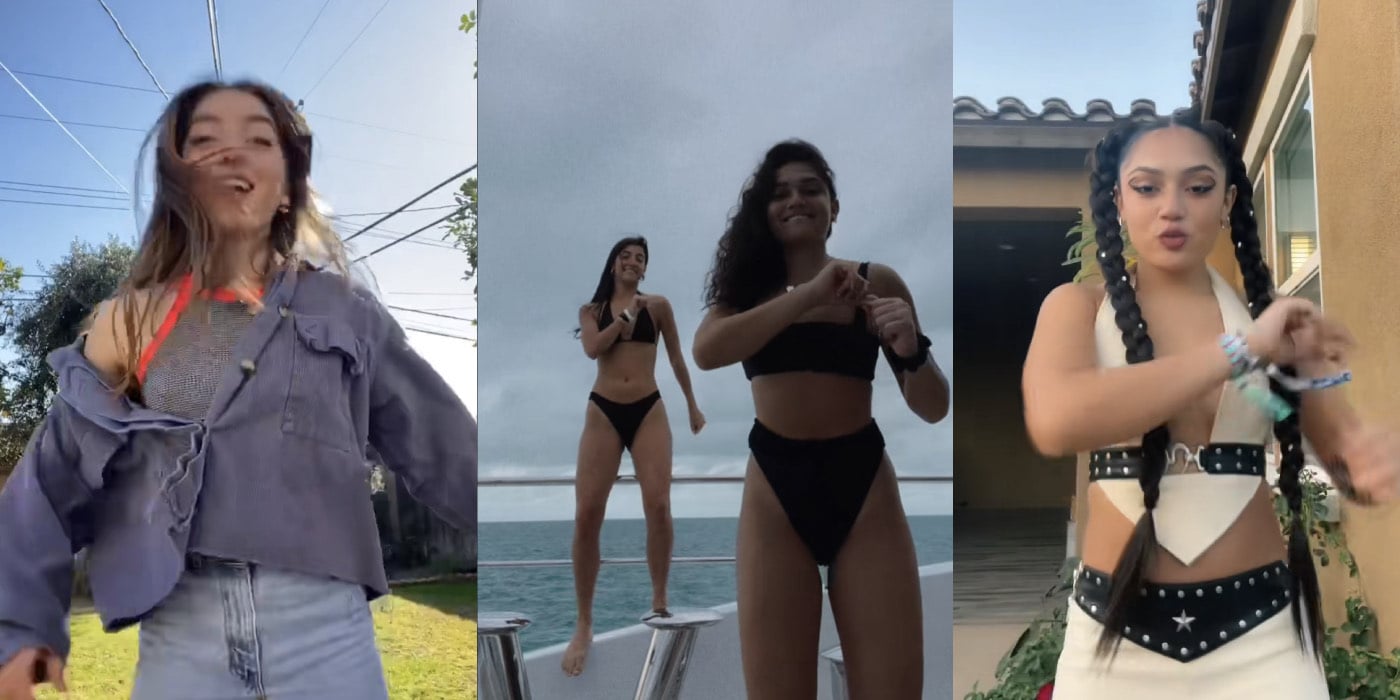 You’d think a song about a young woman suffering from loneliness after break up would make for a zany dance craze but, alas, New Zealand pop singer BENEE’s Supalonely did just that in the first half of 2020. TikTok user @zoifishh’s original choreography to the song has amassed approximately 2.3 million likes to date.

After @zoifishh’s original video, influencers like Charli D’Amelio and Addison Rae picked up the dance, helping it to reach amazing heights on TikTok. To date, Supalonely has been used in 8.8 million videos. Hopefully BENEE’s feeling a lot better these days.

The Git Up - Blanco Brown 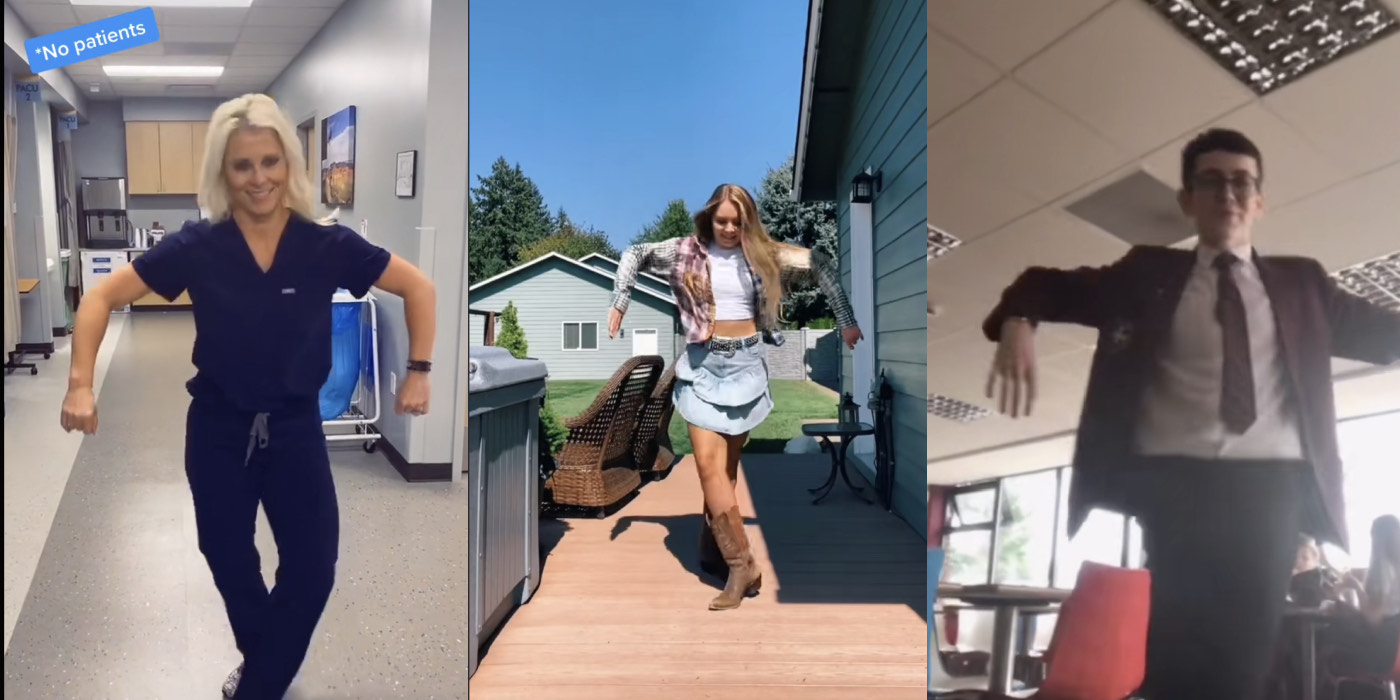 Half-brothers Ajani Huff,19, and Davonte House, 21, from Utah have created more than one viral TikTok dance. Their first, posted in May 2019, was to Blanco Brown’s The Git Up and has been used three million times on the app. Their initial dance and original choreography was filmed in a gazebo of all places. “At first [we were] just doing it for fun, but then after we did “get up” we realized the power choreographers have,” House said.

Their eclectic footwork - a combination of country and hip-hop - started trending without their credit so Ajani and Davonte did the rounds, commenting on various videos of strangers doing the Git Up challenge to let them know its heritage. TikTok is now, at least partially, aware of where the dance came from. 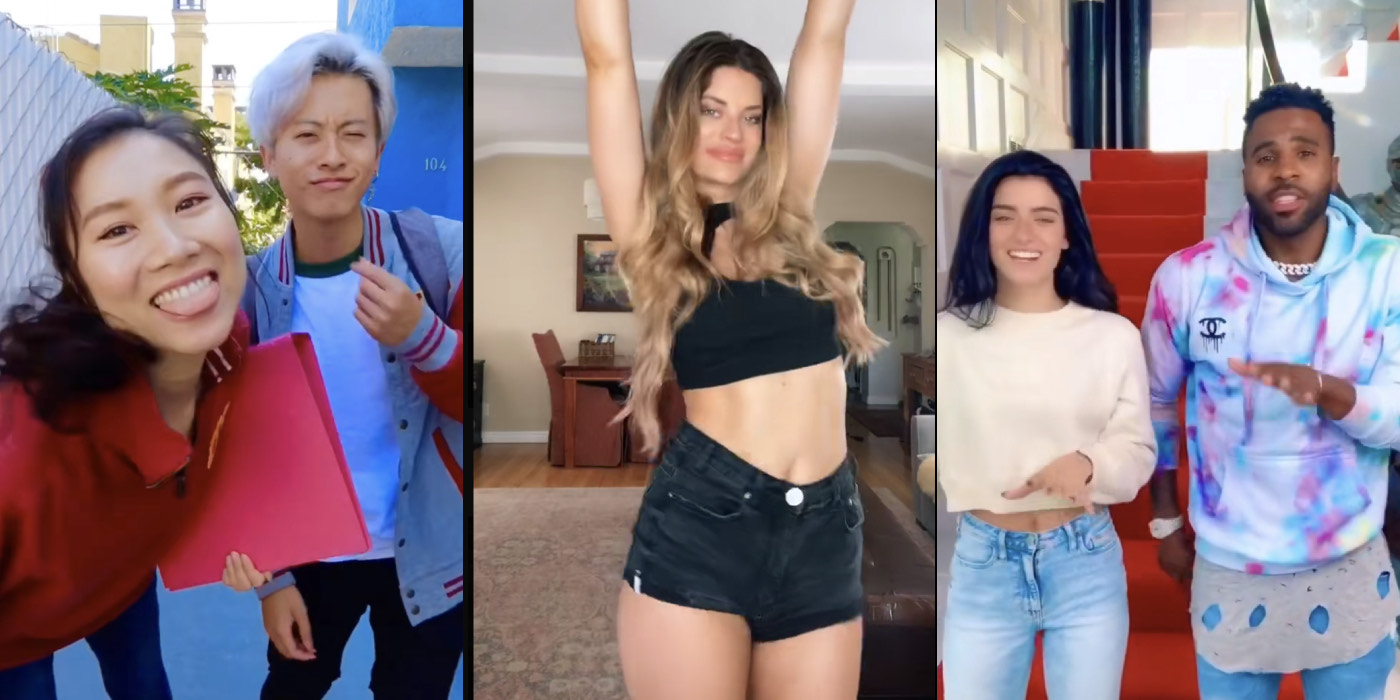 This dance set to a beat produced by Jawsh 685, the Laxed (Siren Beat) dance involves a mixture of hand movements and body rolls. It tied in with the “embrace your culture” trend which saw users sharing examples of their cultural fashion choices while dancing to the beat.

Jawsh 685 ended up collaborating with Jason Derulo on a song using the beat called Savage Love which has also become popular on TikTok. The artist himself wasn’t too sure about the app before his music went viral. “I saw it on TikTok when it was at about 60,000 views, I started telling my brother that I was seeing the numbers go real quick,” he told Music Week.

“I wasn’t a big TikTok person, I only got the app a month or two before the song started popping,” he said. “I didn’t care about it, I thought TikTok was a sort of cringey app and I didn’t think too much of it, I got it and started watching random videos come up.”

He went on: “There’s heaps of music on there, it’s good because you’ve got a lot of people dancing on there. It depends if the song is catching or not, you can get someone really big, or a random song that just blows up because everyone follows the tune. People follow a trend of a song and you can blow up easily and the artist gets known. The thing with mine is, I was excited that I actually saw people like my song and it wasn’t just adding up because it was a trend.” 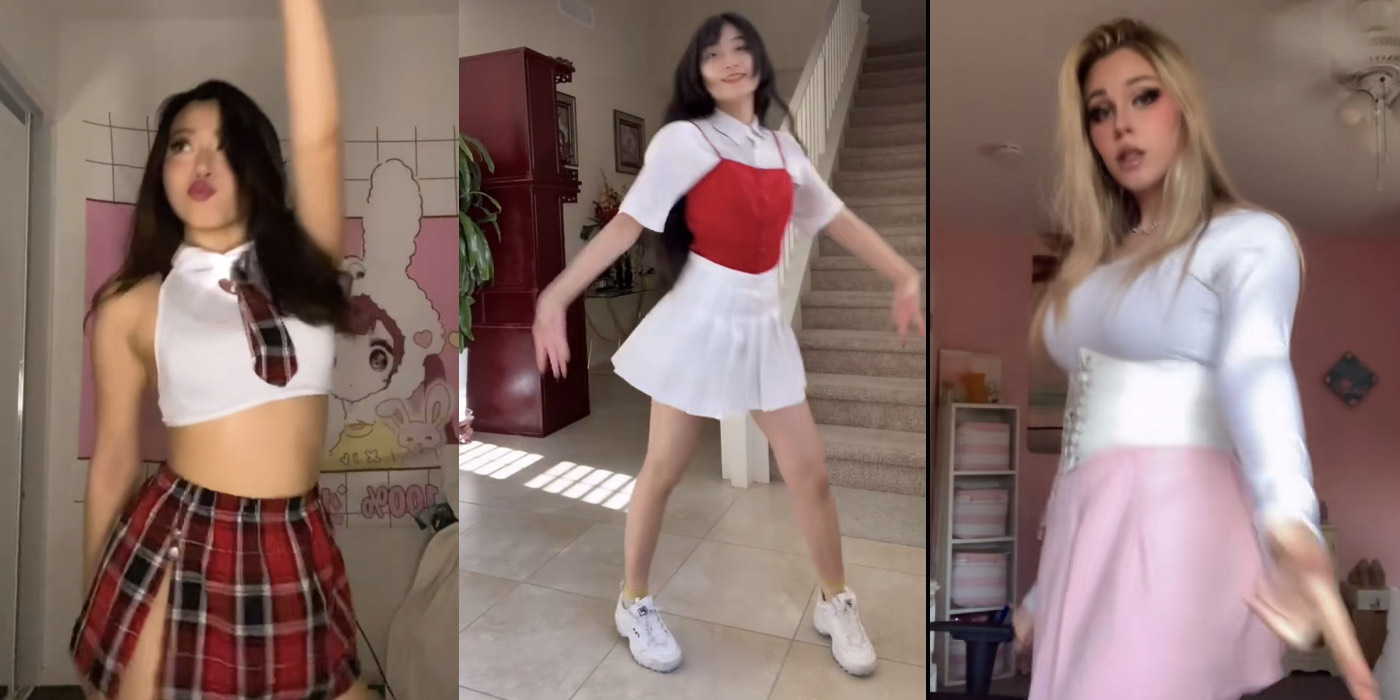 We couldn’t make a list of TikTok dances without touching on the phenomenon that is K-pop? AKA Korean Pop? AKA wild successful, vibrant music produced and manufactured in South Korea by South Koreans? Well, it may never have broke the mould here in the West were it not for a TikTok dance set to girl group Red Velvet’s Russian Roulette.

Where the craze came from is a bit of a unique compared to the others above. The song took off on TikTok after a video of Vivi from LOONA, a 12-member girl group (yes, 12) dancing to it on Korean variety show Fact iN Star started to do the rounds. Set to a remix of Migos’ YRN it attracted the attention of some of TikTok’s biggest players including Bella Poarch, Noah Beck and Larri Merritt.