A list of the cringiest tweets of all time 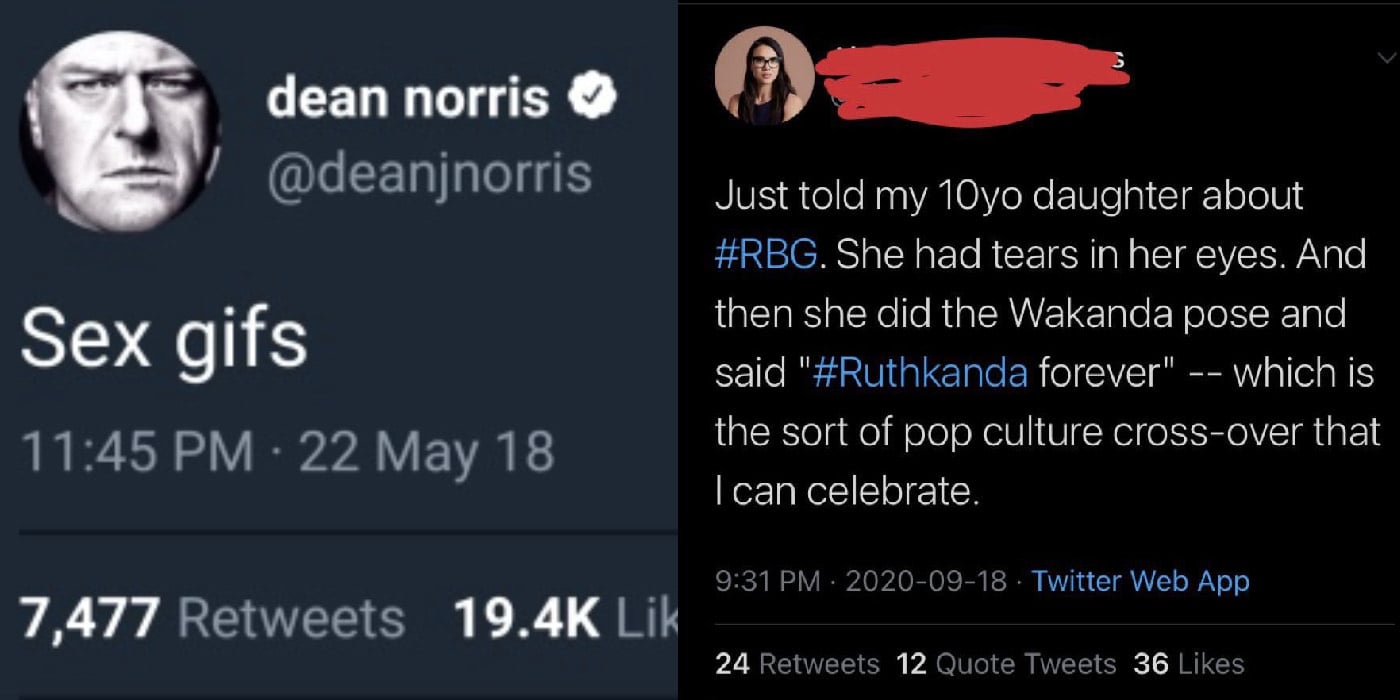 Twitter cringe is the gift that keeps on giving.

Who knew in 2006 that something as simple and restricted as Twitter could be host to so much cringe? The people have found a way over the last sixteen years, whether it be brands, celebrities or just regular people.

Most examples of cringeworthy tweets come from celebrities and politicians, thanks to them being out of touch. If you have no grasp of the modern world and how it works, the chances are you’re opinions are going to be outdated or delusional. Combine this with middle age and it’s near impossible to tweet anything that isn’t cringe.

So here’s a few from the vault that you might have forgotten about, for old times sake. What would life be without them? 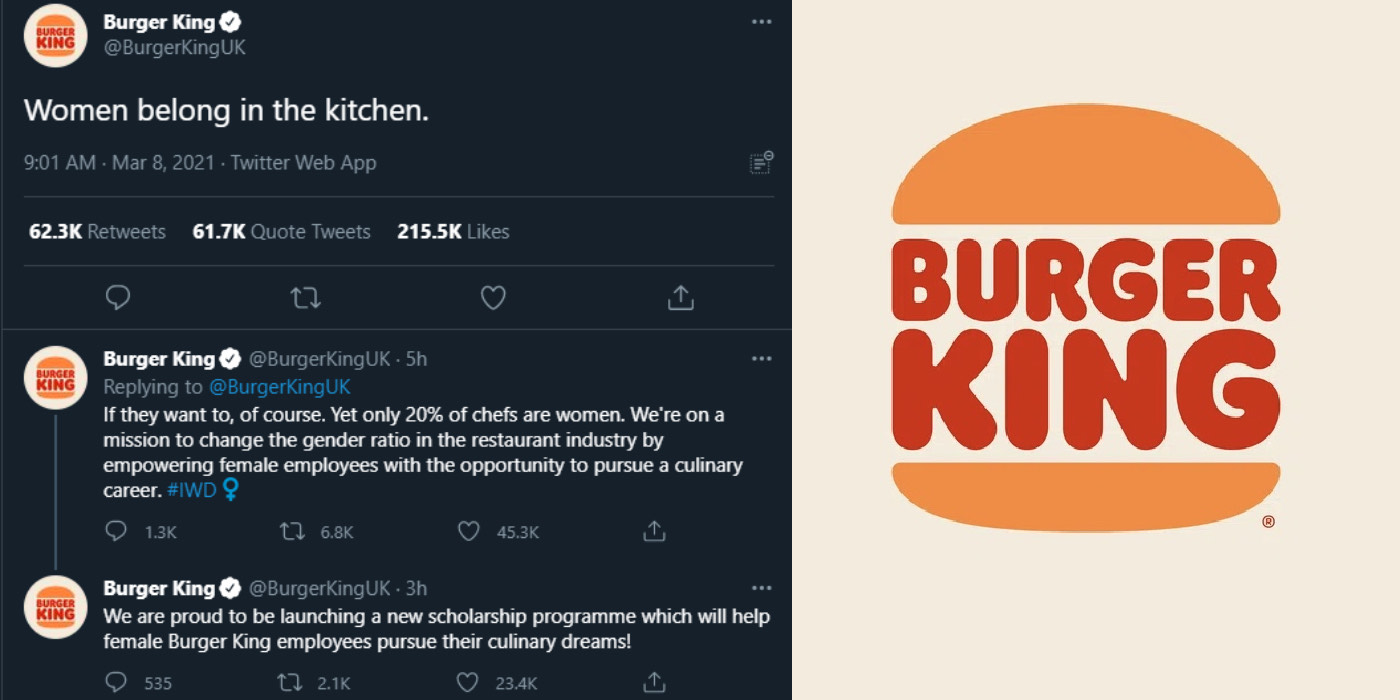 “Women belong in the kitchen,” Burger King UK tweeted on International Women’s Day. “”If they want to, of course,” read a follow-up tweet. “Yet only 20% of chefs are women. We’re on a mission to change the gender ratio in the restaurant industry by empowering female employees with the opportunity to pursue a culinary career.”

The thread then highlighted its new scholarship program for female employees to “pursue their culinary dreams!” But later in the day, Burger King UK, before deleting the tweet, tweeted an apology: “We got our initial tweet wrong and we’re sorry. Our aim was to draw attention to the fact that only 20% of professional chefs in UK kitchens are women and to help change that by awarding culinary scholarships.” This is a strong example of why we should have never allowed brands to become posters. Make the burgers and shut up.

Dean Norris on the prowl for Sex GIFS 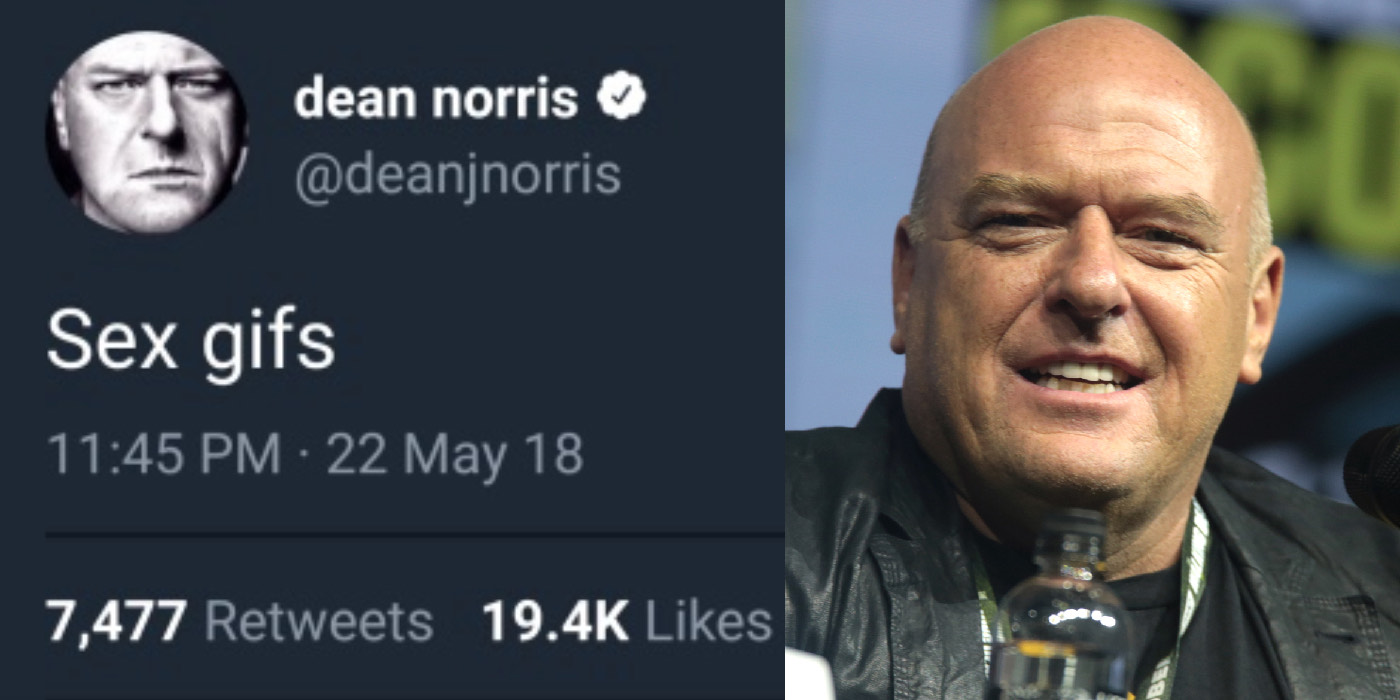 Did you know Breaking Bad’s Dean Norris was the valedictorian of his graduating class at Clay High School, and was accepted to Harvard College, where he graduated in 1985? That he’s the father of two daughters and three sons, with an age span of 17 years between the eldest and youngest? How about the fact he once tweeted the words “sex gifs”. 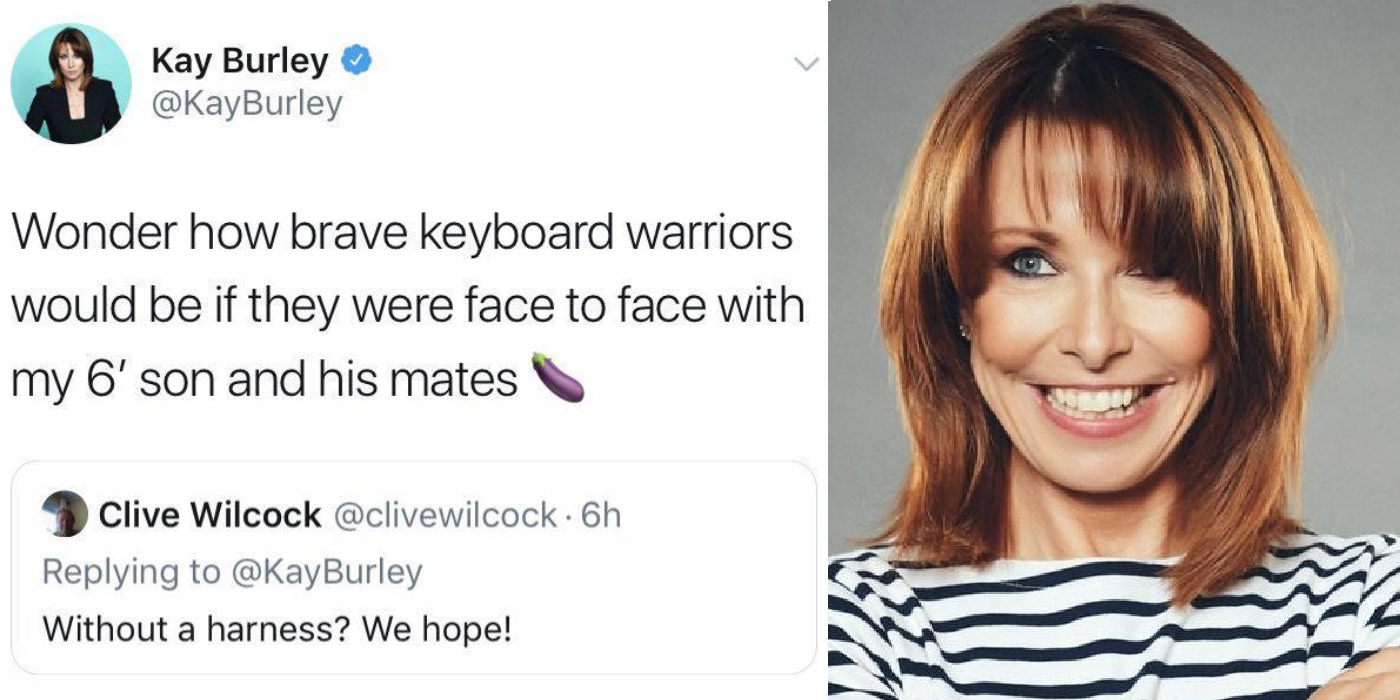 Kay Burley, one of mainstream media’s greatest provocateurs, has supplied the British public with endless amounts of cringe. As an interviewer, Burley has created a reputation for being insensitive, inappropriate, biased, rude and intrusive. She has accused demonstrators of wasting their time and railway strikers of being greedy. Many petitions have been made demanding she get the sack.

She’s also a hypocrite. In December 2020 she attended two lockdown “events” to celebrate her birthday with a group of colleagues from Sky News. Both she and Beth Rigby were suspended for 3 months. A few months later, she was roasting MPs about them breaking lockdown rules. But it’s in her cringe state that Burley is at her most pure.

Most of it is displayed on her Twitter account. In the wake of a November 2015 Paris attacks, Burley shared a picture of a Labrador at a memorial, noting the “sadness in his eyes”. A few months later, she put her son and the aubergine emoji in the same sentence.

The eventually deleted post was in response to a troll suggesting she jump off a cliff with no safety gear. “Wonder how brave keyboards warriors would be if they were face to face with my 6′ son and his mates?” the news anchor wrote, thinking she’d settled the beef. But thanks to the suggestive vegetable on the end of it, the attention only grew. 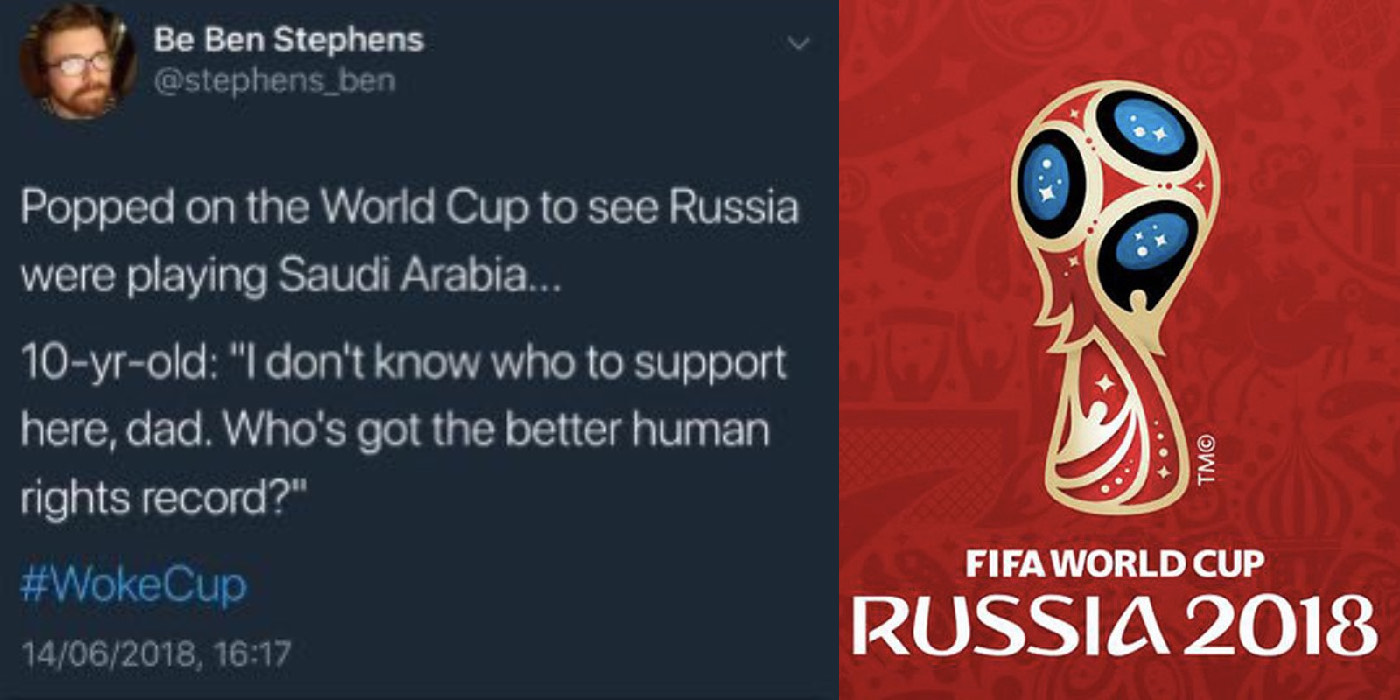 The choice to make Russia the host of the 2018 FIFA World Cup was controversial to say the least. Issues included the level of racism in Russian football, human rights abuses by the Russian government, and discrimination against LGBT citizens among Russian society. Russia’s involvement in the ongoing conflict in Ukraine had also prompted calls for the tournament to be moved, especially after the annexation of Crimea. In 2014, FIFA president Sepp Blatter stated that “the World Cup has been given and voted to Russia and we are going forward with our work”.

But there were whispers (yells) of corruption in the bidding processes. Growing suspicions of bribery by FIFA members for the 2018 and 2022 World Cups led to threats from England’s FA to boycott the tournament. They claimed that four members of the executive committee had requested bribes to vote for England, and Sepp Blatter had said it had already been arranged before the vote that Russia would win.

This level of corruption didn’t go down too well on social media, where users across all the major platforms made their opinions clear, including one father who shared a startling conversation he had with his infant daughter: “Popped on the World Cup to see Russia were playing Saudi Arabia… 10 -yr-old: ‘I don’t know who to support here, dad. Who’s got the better human rights record?'”

It’s not true, is it? Children don’t have concepts of what countries are beyond their names let alone their records on human right violations, do they? The cringe was strong with this one. 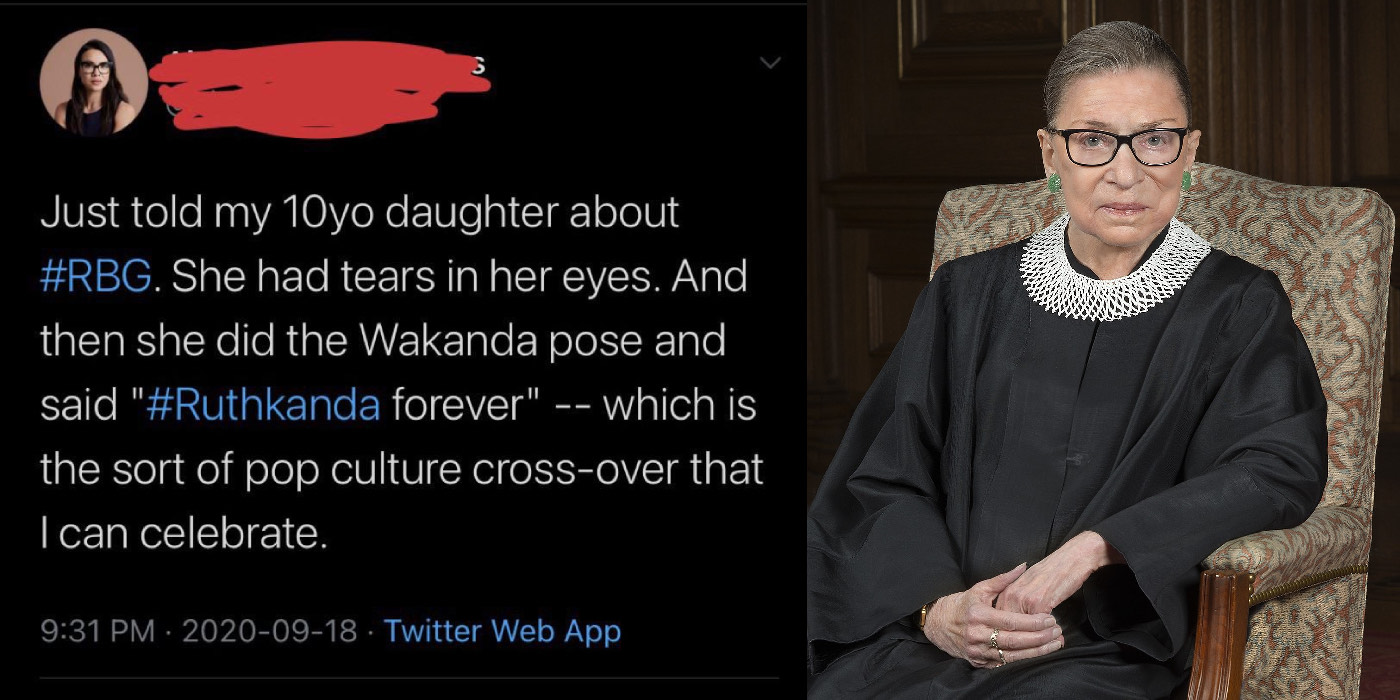 On a similar note, one woman faced global mockery after claiming her 10-year-old daughter said “Ruthkanda Forever” after hearing of Supreme Court Justice Ruth Bader Ginsburg’s death. Ginsburg, the second woman in history appointed to the nation’s Supreme Court, was a champion for women, popularly known for her stances endorsing abortion rights.

“She had tears in her eyes,” wrote the tweet’s author, Alexandra Lee-Capps. “And then she did the Wakanda pose and said “#Ruthkanda forever” - which is the sort of pop culture cross over that I can celebrate,” she continued.

The post drove Twitter crazy, with many accusing Lee-Capps of fabricating a disingenuous story for likes and retweets while placing responsibility for the statement on her child. “Imagine growing up to find out your mom tweeted a lie about you saying Ruthkanda Forever for no reason,” one wrote.

“I’m gonna go out on a limb and assume realistically that her 10 yr old has no real idea who RBG is, that this is fake, and that her daughter is really crying about the continuous virtual classes she has to attend instead,” another quipped. 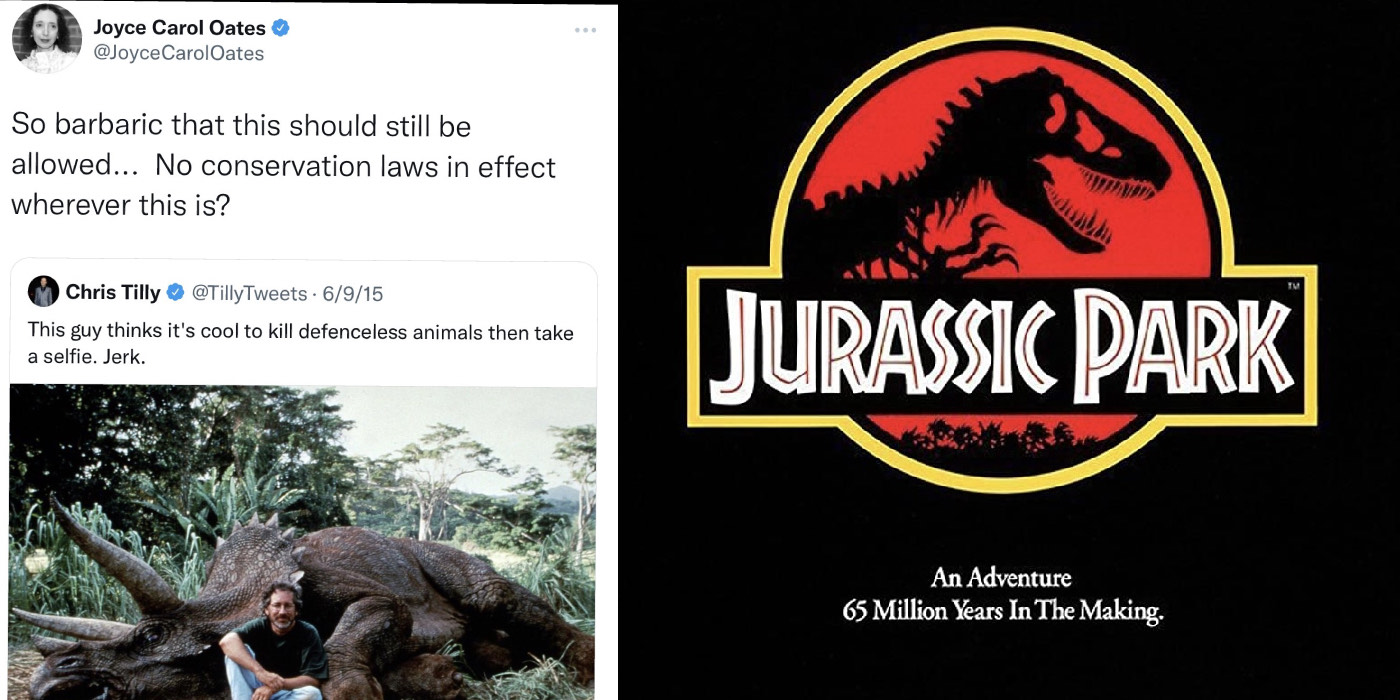 I mean. The header says it all. What more do you need? 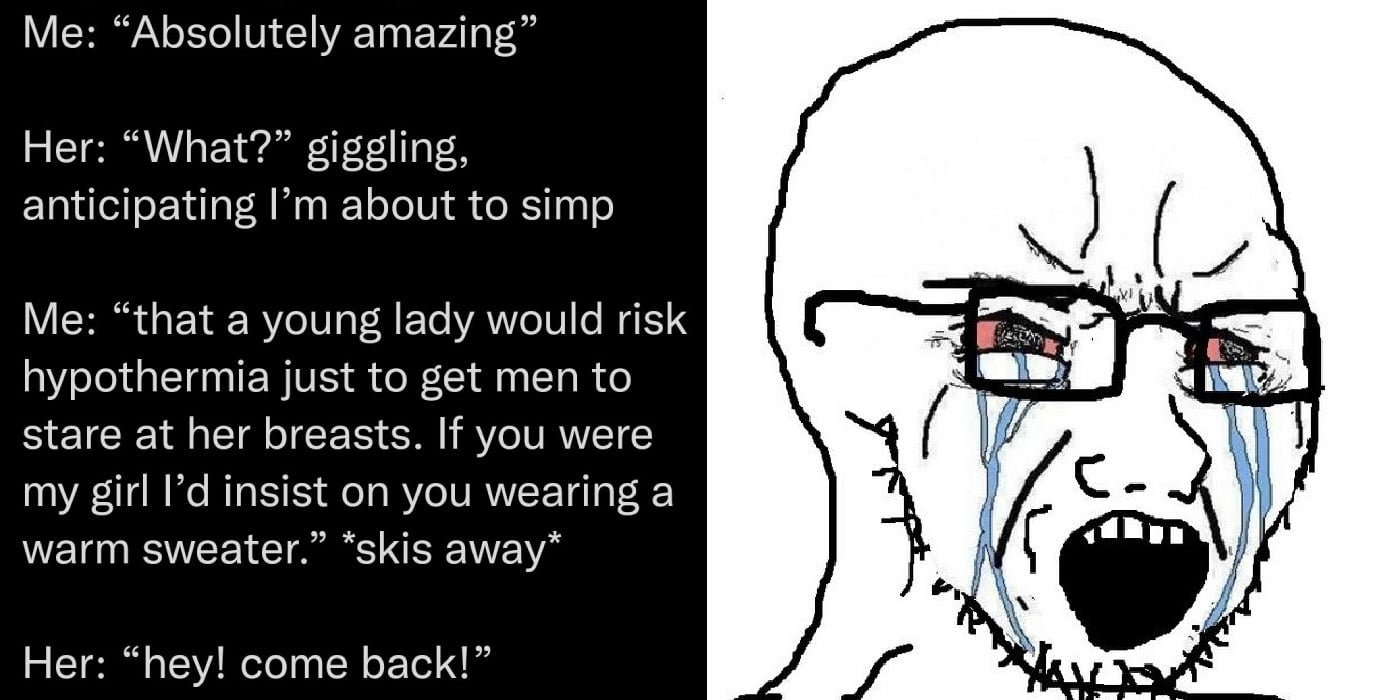 Back in the 90s, a shy and lonely teenager decided to fire up his dial-up modem one night to find someone he could chat to. Across these early-stage web forums, he found friends just like him who were awkward in real life and struggled when it came to sex and dating. They eventually became a community, labelling themselves as “involuntary celibacy.” Later the term was shortened to “incel.”

Since these wholesome beginnings, where incels would communicate with female members of the community for advice, the culture has taken on a much darker form. At worst, they are full of misogyny and violence. At best, they are endemic in the DMs of every woman with a social media handle.

Naturally, some of these DMs have leaked. In a few short months, the Twitter feed @incelReplies, also styled as “incel pickup lines,” picked up more than a quarter of a million followers off the back of these cringe messages. It is one of many gimmick accounts that hone in on a niche form of content, normally curating from a pile of submissions before unloading the best on their fans.

This one is a really special. One man’s dream opener to an attractive girl on a snowy mountain. Preposterous. 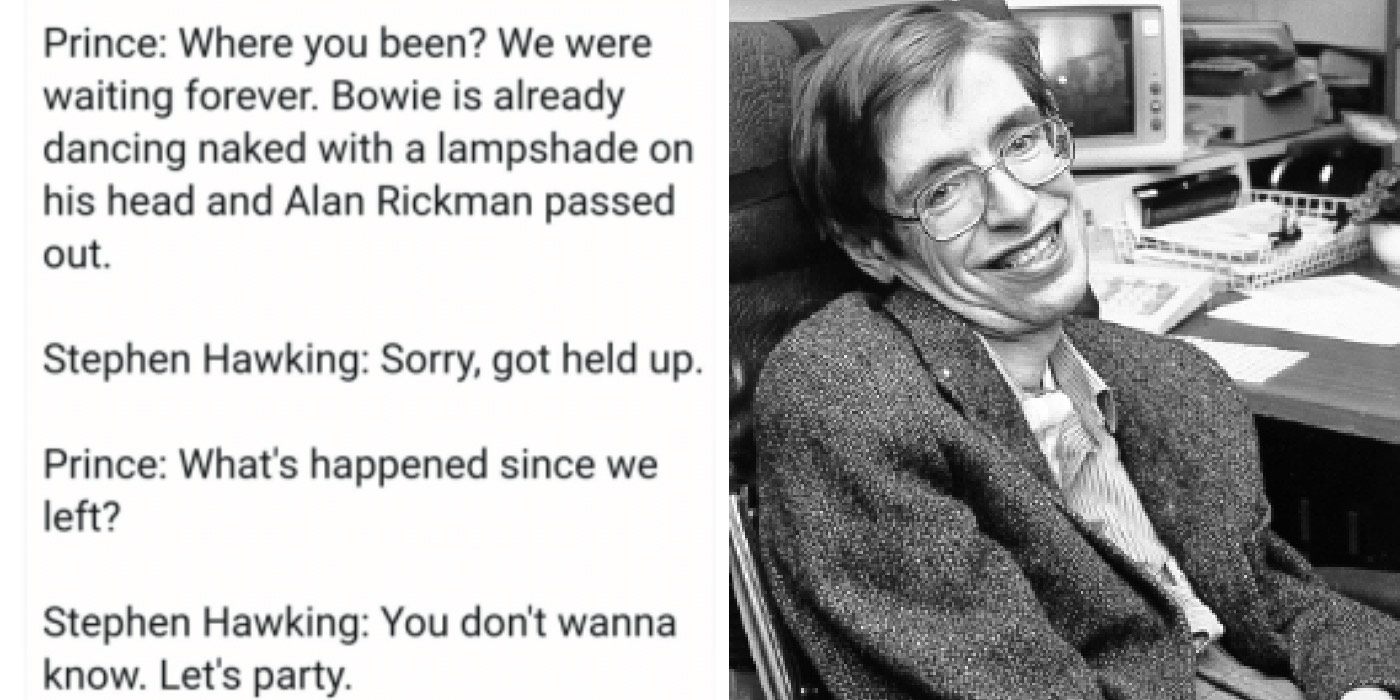 Hawking’s theories on the origins and nature of the universe revolutionised modern physics, while his best-selling books made the field accessible to millions of readers worldwide. In the eyes of many, Hawking’s astronomical impact is so widely recognised, it changed how the world understands the universe.

So it’s a great shame that he was fictionalised as a party-animal half-wit in this cringe tweet mere hours after his death.

“Where you been?” a hypothetical afterlife Prince says. “We were waiting forever. Bowie is already dancing naked with a lampshade on his head and Alan Rickman passed out.” Hypothetical afterlife Hawking then apologises for the delay and when asked if anything has happened since the rest died, declares: “You don’t wanna know. Let’s party.”

Is this the worst piece of assembled text in the history of language? Haters would say no. But it is. This is as bad at it gets. The type of Tweet that makes you envy Stevie Wonder. Or Stephen Hawking, as he is a dead man uncapable of reading. Professor Hawking, wherever you are, you deserved better than this.