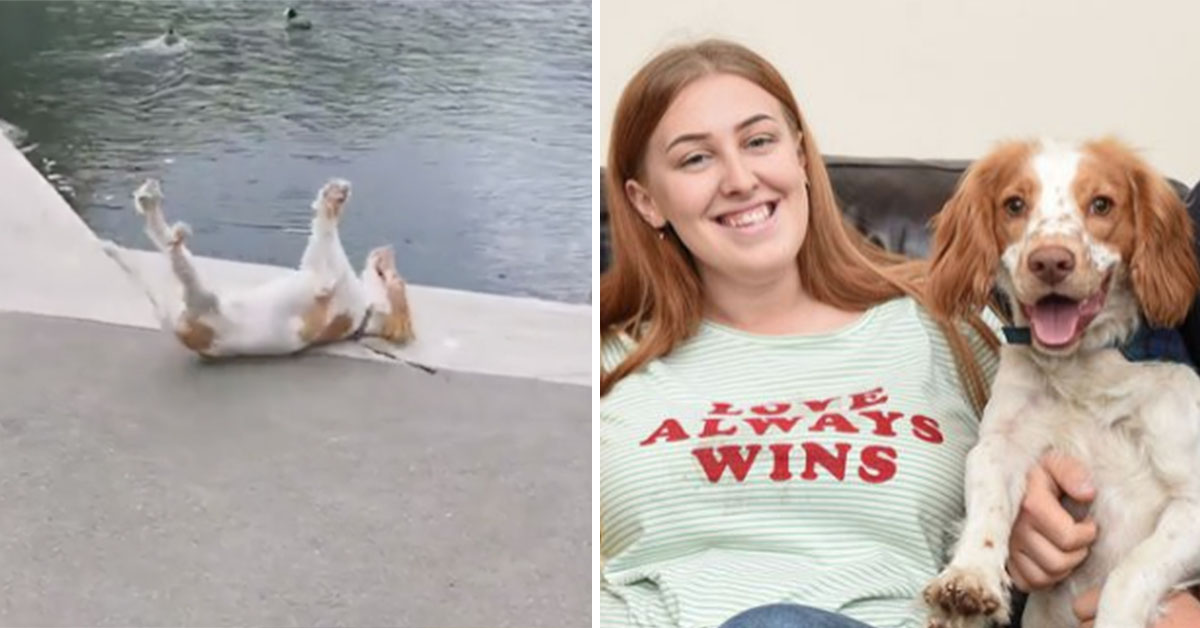 One adorable puppy who lives in Sheffield, UK has been taking the internet by storm due to his unusual medical condition which sees his legs momentarily seize up when he gets too excited! The dog, who is known as Petrified Peter, has been baffling vets over the condition which they have, as yet, no idea the cause of; however, some vets think that it may be a condition called Myotonia Congenita.

Whenever Peter gets too excited, such as seeing new people, other dogs, cats, or in particular ducks, he falls over and exhibits movements akin to the bizarre fainting goat syndrome phenomenon. The syndrome in a certain breed of domestic goats sees their muscles seize up.

In an interview, Peter’s owners assured that vets were confident that Peter is not suffering any pain and could happily live his life with the bizarre condition. Peter’s owners, Emma and Oliver (pictured below) shared a video of their puppy fainting at the sight of some ducks and commented:

‘Peter, our cocker spaniel, has a neurological condition which causes him to fall over at random moments, usually when he’s scared or excited.

‘We call it “fainting goat syndrome”. Today the idea of ducks got him so worked up he froze.’

Peter doesn’t let his condition stop him enjoying himself though, in fact, his Instagram page ‘petrifiedpete’ which has over 28, 000 fans shows him to be one of the most enthusiastic and happy pups on the internet! Peter’s owners have been taking him to the vets in order to try and find a definitive diagnosis for why the fainting spells occur, however, so far they have had no luck.

His owners are always vigilant to make sure that he doesn’t injure himself during his moments of over-excitement as well!

Emily and Oliver originally adopted Petrified Peter from a family in the UK who could no longer care for Peter. Emily and Oliver knew about Peter’s condition but loved him regardless, and who wouldn’t! Emily explained how other people react to Peter’s condition in an interview:

‘Some people are horrified that it’s happening; but I understand, I think people are thinking he’s having maybe having a seizure and he’s in imminent danger. A lot of people just laugh ’cause we do, we’re so used to it now, it is quite comical.

‘We do have to explain it quite a lot.’ Bizarrely, it is not only over-excitement that can trigger this reaction in little Peter, but also moving from grass to concrete terrain provokes the same response.

Thank goodness that Peter’s vets are confident that poor Peter isn’t in any pain, and hopefully, they can find out for definite what is causing this strange reaction!

According to owner Emily, ‘He loves everyone,’ and I think everyone loves him! It’s wonderful that this fantastic family took in this little guy after his previous family wasn’t able to care for him. Peter’s positivity makes for a wonderfully uplifting story, and his loving family should be very proud of how happy they have made his life! Let me know what you make of Peter’s story in the comments below and be sure to tag friends and family who you think would fall in love with little Peter.