After Surviving 6 Major Brain Surgeries, This Woman Is Aiming To Become A Doctor

After Surviving 6 Major Brain Surgeries, This Woman Is Aiming To Become A Doctor 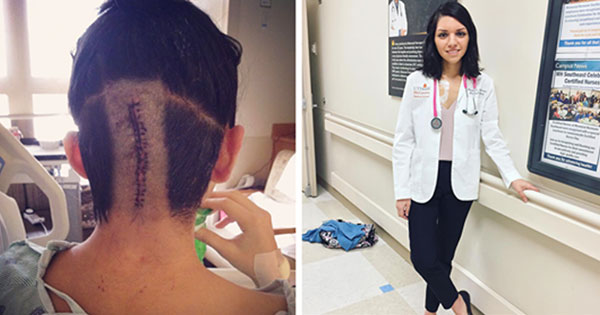 She dreamt of becoming a doctor, but little did she know she’d be the one needing them to survive

In 2012, Claudia Martinez was just living her student lifestyle – partying, occasionally studying, dating – but some weird things had started happening to her. She’d been getting horrible headaches, losing feeling in her limbs and even more awful symptoms.

Finally, she decided to see her doctor.

You can imagine the shock when just one week after her diagnosis she was having emergency brain surgery! Claudia was diagnosed with chiari malformation; a rare condition where there is an issue with the bottom of the skull and in the part of the brain that controls balance.

If she had continued to live her life without medical assistance, Claudia could have become paralyzed from the neck down!

Talking about her experience, she said:

‘When I got my diagnosis, I was sent to a neurosurgeon. He told me that I needed brain surgery as soon as possible. If not, I was going to be paralyzed from the neck down. And so within a week, I was undergoing my first brain surgery’.

Claudia was just 21 when she got her diagnosis. She was a student at the University of Houston, and ironically, had been wishing to become a doctor herself. You couldn’t write this thing if you tried!

However, our gal didn’t let this stop her. She went on to graduate with a 4.0 GPA AND got accepted into the UTHealth McGovern Medical School! It wasn’t all good news though, as Claudia ended up going on to have five more operations.

Chiari malformation is a debilitating condition; sufferers experience their brain tissue grow into the spinal canal. It can occur due to part of the skull being abnormally small or irregular in its shape; it causes pressure on the brain and therefore forces it downwards.

Claudia went on to have six operations. What a poor little angel! An operation of hers in 2017 resulted in her waking up from a stroke and being paralyzed from the neck down! She had been warned that the surgery she would be undertaking was experimental, but her doctors informed her that it was her only hope.

As can be imagined, Claudia had to go on to re-learn how to do:

‘Every single thing we take for granted in everyday life’.

She re-discovered how to walk, simply move her limbs, eat by herself, dress herself – the list is endless.

Not only that, the condition has even affected her organs – especially her stomach; which itself is partially paralyzed!

Due to this, Claudia was on a feeding tube for three years.

Last December, she posted an instagram with the following caption:

‘Life is tough darling, but so are you. As someone who was previously on a pure liquid diet, then purely tube fed and now as someone who is being kept alive by a GJ feeding tube and IV fluids, it’s difficult to not feel frustrated from time to time. Next week, I’ll be having surgery on my stomach and intestines. It’ll be performed by two surgeons. We are hoping with this surgery, I’ll be able to eat and won’t have to survive off a feeding tube and IV fluids’. She is maybe the most inspiring person, like, ever!

In March this year, Claudia was able to run – which is HUGE news, especially considering that she wasn’t able to walk at some points in her life.

She also learnt that shortly her feeding tubes will be able to be removed:

‘The surgery was a great success and I have been able to maintain and gain weight eating orally since then while weaning off the feeding tube. I am hoping to get my feeding tube removed in the next couple of months, but it has to stay in for now’.

Despite all of the pain and suffering that Claudia endures on a day-to-day basis, she insists that she is truly blessed!

‘I thank God every day for what I’ve gone through, [because] it is how I’ve found my calling. I’ve officially decided to pursue a residency in PM&R (Physical Medicine and Rehabilitation)’.

Claudia has just one year left at med school before she can finally achieve her dream. And truthfully, is there anyone more worthy?!

She also organizes an annual ‘Conquer Chiara’ walk, located in Houston, which raises money to research the condition.