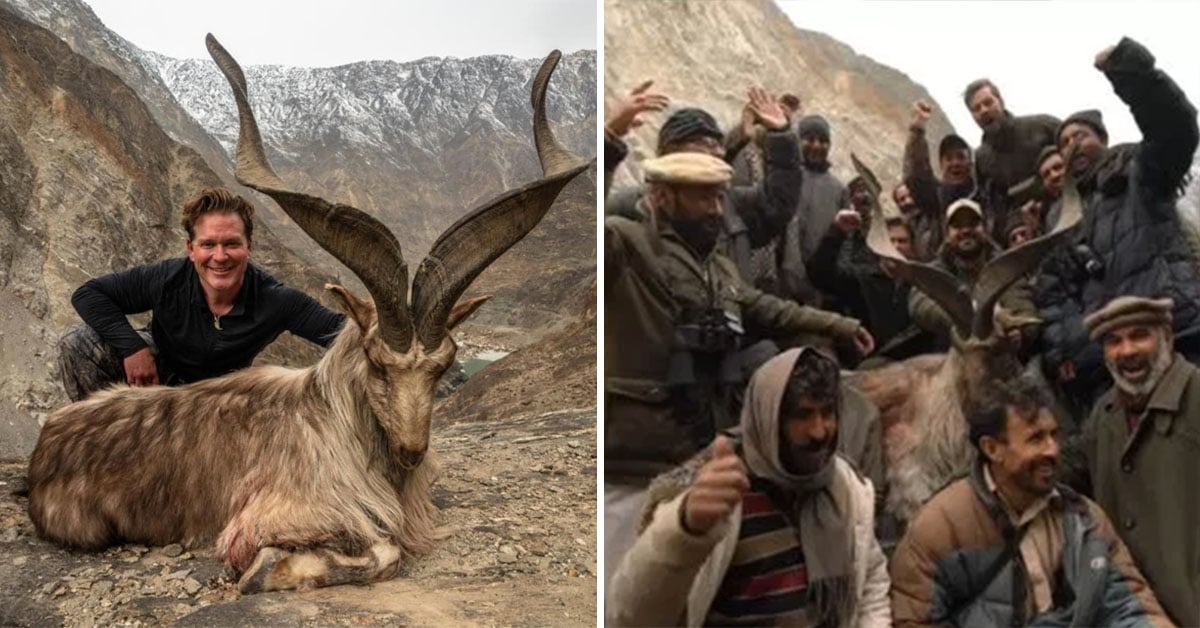 According to reports, an American trophy hunter paid a staggering $110, 000 to kill and take a photo with a rare species of mountain goat while on a trip to Pakistan. Bryan Harlan has been making headlines across the globe and causing mass controversy over photographs of him posing with a rare mountain goat called an Astore markhor which he killed for a high price.

The Astore markhor is the national animal of Pakistan and was once an endangered subspecies but is now considered ‘threatened’. There are now several sanctuaries across India set up to protect the markhors; however, due to the likes of deforestation, military activities, and unregulated trophy hunting, the species is constantly under threat. Harlan himself ‘bragged’ about how easy the shot was to Pakistani media outlets, saying: ‘It was an easy and close shot. I am pleased to take this trophy.’ In another interview, Harlan ardently (and with no tinge of irony) explained that he considered his horrific little adventure to be in aid of conservation:

‘This is a perfect example of hunters and villagers coming together for a common goal of game conservation.’

I’m sick of reading people justifying their hunting with a protestation that their adding money to the infrastructure; here’s an idea, if you’re so concerned with the conditions of a village, donate the money and don’t shoot rare animals to satisfy your fractured sense of masculinity… you know, just go and see them alive, like normal not insecure people do. Pakistan apparently banned local hunting some years back, however, permits foreign hunters to come and shoot some of the extremely rare animals at a high price.

One Pakistani journalist tweeted: ‘A couple of years ago an American hunter paid lots of dollars to hunt a markhor – this month again 2 hunters (one American & another Swiss) have arrived in Chitral to hunt this beautiful animal – what a complete shame that we facilitate this slaughter’.

Another Twitter user tweeted: ‘Bryan Harlan paid $110,000 to stalk and kill a markhor goat, the national animal of Pakistan. There are only 5700 of them on the planet! F this guy’. The Washington Post spoke to the man who has guided Harlan and other Americans on their hunts for Pakistan’s national animal:

‘This is not just about hunting. The number of animals is increasing, and these foreign hunters are millionaires who go back and tell the world that Pakistan is safe. The twitter-verse has not been so understanding of Harlan’s unnecessary killing of a beautiful animal which numbers only 5,700 left on the planet… and I wonder why? With responses including the likes of:

‘Pakistan doesn’t need blood thirsty hunters landing in their country to prove how great a place it is. I’ve been there, i can vouch for its beauty. This corner of the world, best kept little secret. But please don’t condone this deplorable act. #BryanKinselHarlan’ – KS Ashvin

‘Its no bravery in shooting a near extinct peaceful animal with a powerful gun. You are worse then a coward poacher. Shame on #trophyhunters Ban #trophyhunting around the world.’ – Arjun Bhatt

There were also a lot of people echoing the sentiment that Harlan could do much more good with his wealth that did not involve killing near-extinct animals. I just do not understand how someone can look at such a beautiful animal as this, and then simply shoot it down. How can people not see that being close to these sorts of majestic creatures and seeing them alive is a breathtaking experience alone?

Until people like Bryan Harlan abandon their archaic ideas, frail sense of masculinity, and flagrant disregard for this planet, then stories like this will sadly continue to surface.

What do you make of Bryan’s horrific pictures? Let me know your thoughts in the comments below!