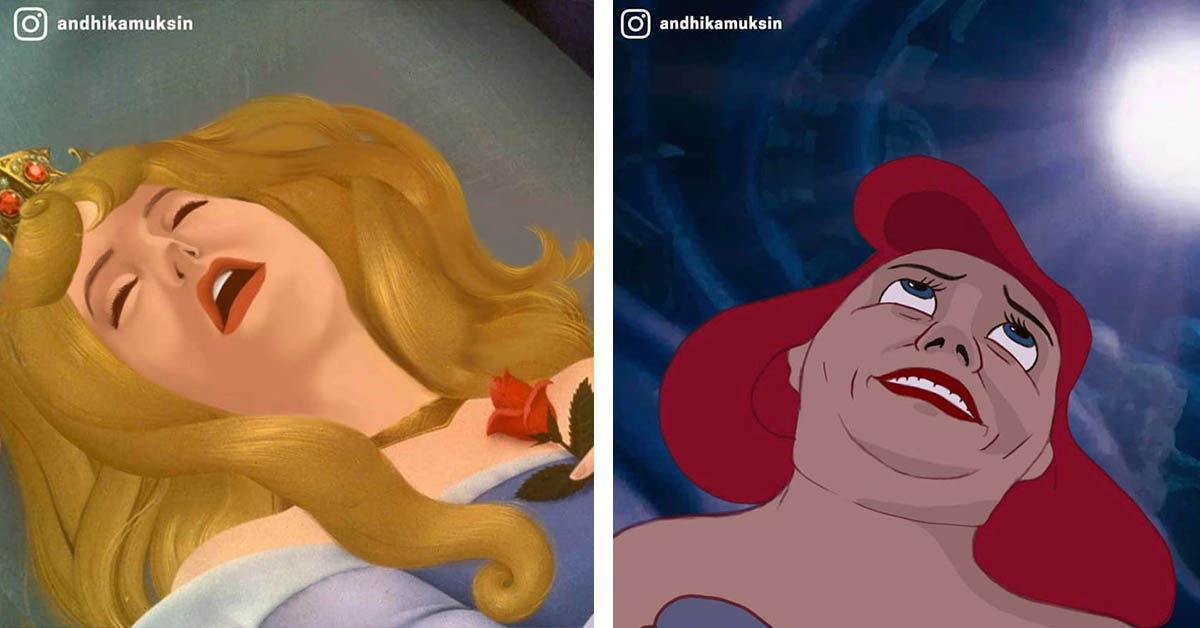 Disney, it’s hard NOT to love it. Come to think of it, I’d be willing to bet my house on the fact that there isn’t one person out there who doesn’t love at least one thing about the Disney Universe… because, let’s face it, these days, Disney seems to own absolutely everything on our planet in some way, shape or form. (You know it to be true). As loved as the Walt Disney Company is, however, it’s not completely perfect. We still have our gripes and complaints about it, the little issues we can’t seem to shake and the annoying cliches they can’t seem to help but keep using time and time again. One of which happens to be the absolute flawlessness of the ever-beloved Disney Princess’.

Look, I LOVE the Disney princess’ just as much as the next Dis-nerd, especially Belle (shes’s my homegirl FYI), but with all their perfect hair, perfect bodies and perfect mannerisms it can get a little… well…. tired.

One person who definitely seems to think so is Andhika Muksin, an artist who is currently making his rounds on Facebook thanks to his incredible Disney Princess “edits”. And if you keep scrolling down, it won’t be long until you realize why… Let’s face it – NOBODY sleeps the way Disney Princess’ sleep. Like, nobody. Unless you purposely try to wake up before your bae so you can pretend to be asleep in order to look like this (hey, it happens). Muksin’s portrayal of a “Sleeping Beauty” is much more realistic. I love it when people attempt to place Disney Princess’ in “modern day” situations. I can totally see Cindy not giving a flying freak what she looked like if she was Facetiming one of her closest pals!

3. Part Of Those Chins It is absolutely NO secret that “looking up from below” is literally the single most UNFLATTERING angle known to man – I don’t care who you are… so why should Disney Princesses be allowed to escape this rule!? Yeah, Ariel landed on the Human World for the first time ever after spending her entire life in the ocean and she has perfect hair with not a slither of smudged make-up!? I ain’t buying what you’re selling, Disney. Not to mention the sheer speed and FORCE that Aladdin must have been traveling to get around the ENTIRE WORLD during ONE song… and Princess Jasmine managed to come away from that without one hair out of place? NOPE.

6. The Girl Can’t Speak, But She Sure Can Freakin’ Eat. This is possibly the most relatable one of all. Ariel probably would have forgotten that the reason she bothered coming to the Human World at all was because of some guy the minute she tried her first slice of pizza.

7. Gravity Is The REAL Savage Here Once again, the rules of gravity should apply to you whether you’re a Disney Princess or NOT. Jumping off an extremely high cliff = Instant Facelift. Never in the history of the WORLD has anybody ever, ever, ever taken a bite out of an apple as delicately as Snow White did… like, ever. It’s practically impossible. You either get your entire mouth on there or you don’t bite it at all. Now, THIS is the view Prince Eric should have been greeted with when he first opened his eyes after Ariel rescued him. An attractive person looking up at you from this angle is literally EVERYBODY’S worst nightmare… do not deny it. Another thing I’m not buying is when Aurora pricks her finger on that cursed spindle. Sure, it may not be the worst thing in the world, but it definitely has to hurt more than that little “ooh!” she let out during the movie. And, yeah, I understand she’s a mermaid and all, however, she can’t be SO used to being caught by a wave that she feels absolutely nothing when one sneak-attacks her from behind, surely!?

As amazing as these all are (and let’s face it, they ARE amazing), Muksin isn’t the only artist out there who has played a hand at challenging Disney’s flawless Princesses. Emmy Award-winning illustrator Loryn Brantz decided that she’d challenge the unhealthy body types promoted by Disney’s princesses by giving them waist-lines that were a bit more true-to-life. And here they are!

I get that swimming around the ocean all day every day your entire life may help you keep those pounds off, but does it really mean that you’d look as though you have a few vital ribs missing!?

And here we have Pochahontus, looking fabulous with a little extra weight sitting around her now human-looking waist.

Honestly, Elsa annoys the heck outta me, but I guess seeing her with a less “Disneyish” waist makes me like her 0.01 times more. As I mentioned before, Belle is my absolute homegirl and I will never ever say a bad word about her. Which is why I feel she looks absolutely flawless in BOTH images… but slightly more realistic in the right hand one. Hey… corsets exist right? Maybe she was just wearing one of them the entire time.

And last but not least, the Princess of Naps, herself, Aurora. Definitely a noticeable difference between these two images – in fact, the first one is pretty shocking – but look, the Prince doesn’t care if she’s packing a few extra realistic pounds, he still wishes to dance with her Once Upon A Dream… See, Disney? It really wouldn’t hurt you to draw our beloved Disney Princess’ with a little extra flesh on their bones every now and then, would it!? We’d love them either way!

What do you think though, folks? Do you agree that Disney should make their characters a lot more realistic or do you think that they’re just cartoons and we need to get freakin’ over it already!? Let me know in the comments! And don’t forget to share this with all your friends and family… especially the Disney-lovin’ ones! AAx