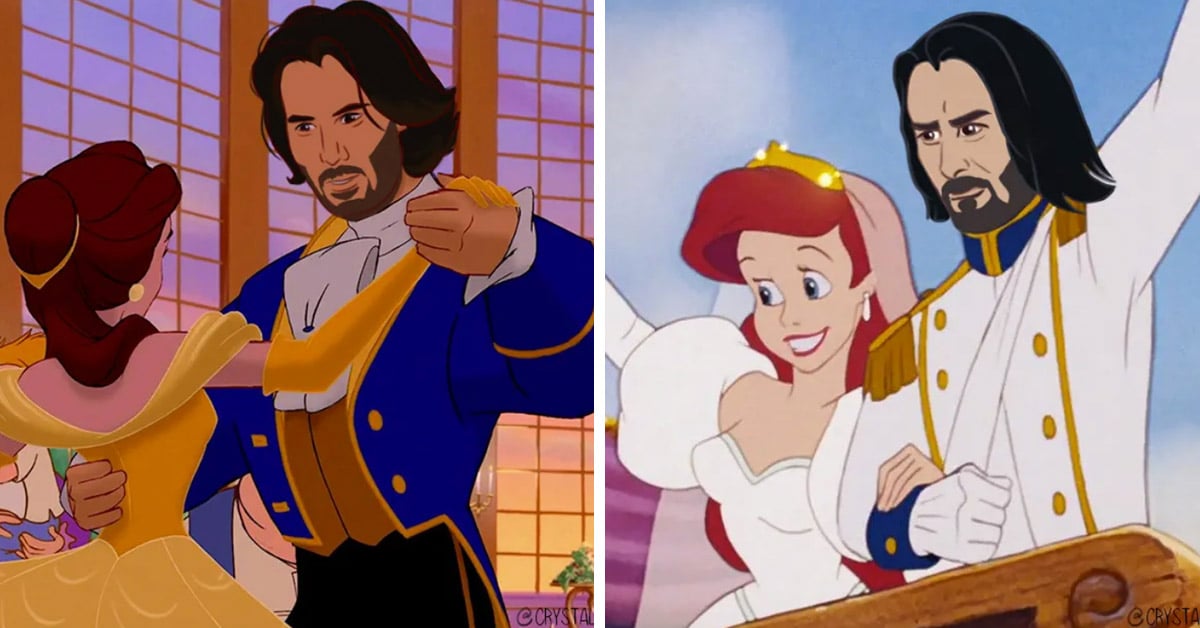 The gentleman of the universe and the internet’s boyfriend Keanu Reeves is going through somewhat of a renaissance. Suddenly, the world has been re-awoken to this amazing actor’s good deeds and awesome attitude. And there’s truly no better homage to pay to this absolute legend than by placing him in the beautiful, happy world in which he belongs; the Disney universe.

Over at BuzzFeed the lovely Crystal Ro has been reimaging Keanu Reeves in place of all of our favourite Disney Princes. It’s an obvious comparison! Keanu is everything a Prince should be; handsome, kind, and deserving of a princess *cough* I could be a princess? *cough* It’s a tale as old as time! Keanu Reeves pops back in time to medieval France and woos a pretty book-worm. Y’know, that old chestnut! Keanu is already Prince Charming, we’re only having confirmed what we all already knew.

I particularly like the *intense* stare Keanu has fixed Cinderella with here. He’s staring this princess down. I’d go on a magic carpet ride with Keanu Reeves anytime! I feel he’d have some ridiculously lovely things to say about each and every corner of the globe. C’mon, Keanu! I can be your diamond in the rough! Tiana is the hard-working, straight-talking, Gumbo-making Princess that Keanu deserves.

I think this is probably my fave. Look at Keanu’s beaming face, he’s just overjoyed to be here, I imagine he’ll wear a similar expression when I marry him in real life. Here’s Keanu and Ariel, waving goodbye to all their problems and sailing off to live a perfect life of charity and good-will. Pocahontas how very dare you glare at Keanu in this way?! Don’t you know who he IS?!

Reeves is looking absolutely dashing in John-Smith-blue here, I hope he begins sporting this costume in real life. Well blow me down! Who’d have thought Keanu would look so fabulous in this old-timey tunic, the man really can pull off anything, can’t he?

I’ve certainly been walking with Keanu once upon a dream, not that he’s come to sweep me off my feet just yet… So how much do you think it would cost to get a photoshop pro to put me in Snow’s place? I’d be puckering up of course. Keanu Reeves would never kiss a sleeping woman and only a woman who was actively displaying enthusiastic consent, he’s good like that! Keanu Reeves is here to make a man out of Mulan! Don’t you just know that being a man in Keanu Reeves’ eyes has nothing to do with coursing rivers and great typhoons but a lot to do with being respectful and kind?

He is the PERFECT replacement to all of the Princes and I think each and every one of these films should be adapted to include Keanu as the love interest/leading man.

Keanu Reeves won’t; imprison your father, forget your face but not your shoe size, lie about his real name, nearly marry your best mate, nearly marry your worst enemy (he is too pure and strong for Ursula’s tricks), invade your country and upset your Dad, kiss you when you’re happily sleeping, kiss you when you’re happily dead, or question your abilities because you’re a woman. UNLIKE SOME OF THE ABOVE MEN! Which Disney scene would you love to shoulder in on to be with Keanu? Let me know in the comments! And be sure to share this with all your Keanu/Disney fan friends! Stay sassy xox