Awesome Reasons To Love Keanu Reeves Even More Than You Already Do!

Awesome Reasons To Love Keanu Reeves Even More Than You Already Do! 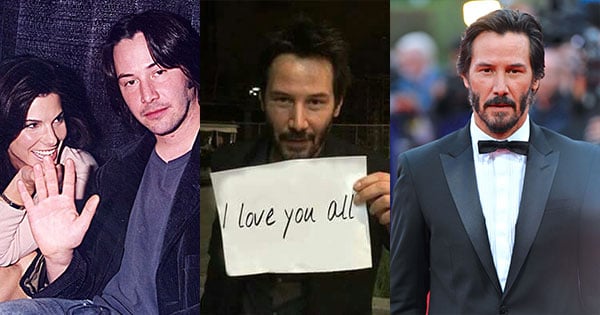 The man. The myth. The legend. – No introduction will do this man justice but I’m sure as hell gonna try…

Fashion isn’t the only thing from the nineties to come back into style. Keanu Reeves is back in town.

Unless you’ve been hiding under a rock, you’ll have noticed that Keanu Reeves has become a bit of a phenomenon, to say the LEAST. And I’m not mad about it… In fact, it’s amazing to see the internet be so genuinely nice about a human being for a change.

Keanu gained fame for his starring roles in several blockbuster films – gaining critical acclaim – but he’s also been in enough washouts to cause to a flood.

With hypes burning bright then dying out, just what has made Keanu Reeves the most popular guy on the internet?There’s just something about this stud that has people coming back for more.

Warning: This is will make you love the man even more than you thought possible. Add puppies into any situation and you’re definitely getting a squeal of joy out of me!

But something about Keanu Reeves and the puppies really tugs on my heartstrings. I think it’s because Keanu basically IS a puppy. Adorable, pure and too damn good for this cruel world.

#2 He Loves All Animals Just look at him feeding these Koi fish.

His smile is freakin’ adorable.

#3 He’s Incredibly Strong In The Face Of Tragedy Did you know all this about Keanu’s life? What a man.

Keanu has been quoted saying :

“Money is the last thing I think about. I could live on what I have already made for the next few centuries.”

You know, admittedly I think about money a helluva lot. Maybe it’s time to take a leaf out of Keanu’s book.

Keanu also set up a cancer charity, supports PETA, the SickKids Foundation and Stand up To Cancer. In 2014, he explained how his sister Kim battled Leukemia for more than a decade!

“You never know how strong you are, until being strong is the only choice you have”

#4 He Might Just Be The Purest Soul On Earth And if that isn’t the best answer then just what is?

This was a pretty profound question for a chat show but as always, Keanu handled it with the grace and wisdom of a saint. I mean, he’s not wrong. Alright Keanu, I see you.

Funny and witty, this man certainly deserves all the recognition he’s been receiving. Sandra girl we are WITH you.

There’s just one I have to disagree on… ‘how handsome he WAS’. WAS?! Still IS Sandra, honey.

#8 And The Most Humble Philanthropist Award Goes To… The fully-fledged saint once said:

“I have a private foundation that’s been running for five or six years, and it helps aid a couple of children’s hospitals and cancer research,”

“I don’t like to attach my name to it, I just let the foundation do what it does.” The woman behind seems to be clutching her dog in fear. And I can’t say her blame her! He looks terrifying.

Although, sometimes I look a lot scarier in my sweatpants and rollers when I take the dog for a walk.

#10 After An Emergency Landing Keanu Hung Out With Other Passengers, Rejecting His Private Luxurious Ride On a flight from San Francisco to Los Angeles, the plane had to make an emergency landing in Bakersfield, California.

It was nearly a two-hour drive from Burbank Airport but according to online footage, Mr Reeves organised people into groups before entertaining them on the journey by reading out facts and playing music.

What an amazing human being. Continuing to be the most morally upstanding human on this earth, Keanu never touches fans when taking a photo with them.

This earned him a lot of praise recently for being totally respectful to women who want photographs with him.

#12 He Is Officially The Internet’s Boyfriend After a rumour circulated that Keanu was lonely, the internet leapt to save him, dubbing him the ‘Internet’s Boyfriend.’

But I definitely wish he was just mine!

Keanu, I love you.