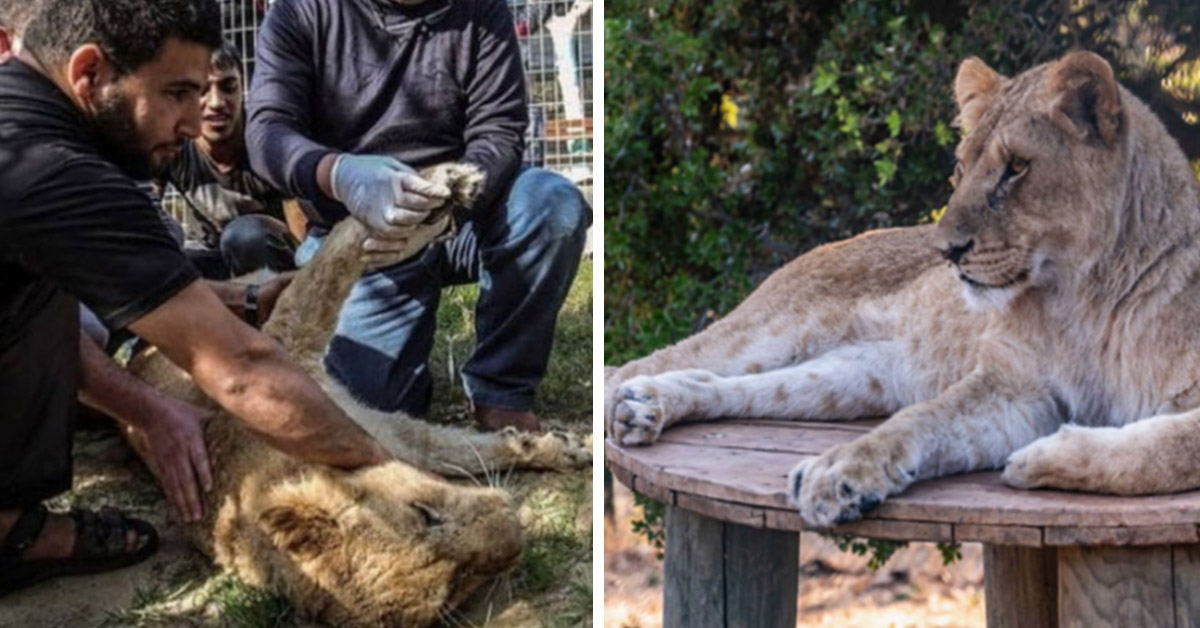 Outrage erupted when footage showed Rafah Zoo employees cruelly declawing a 14-month-old lioness with garden shears. This horribly cruel procedure was carried out on the baby lioness so that children would be able to play with her.

Rafah Zoo was located on the Gaza strip, where 14-month-old Falestine was brutally declawed over the course of two weeks with garden shears and wire cutters. The absolutely disgusting and inexcusable act garnered global outrage. The owner of the zoo, Mohammed Jumaa spoke to the Daily Mail, excusing this cruelty by claiming;

“I’m trying to reduce the aggression of the lioness so it can be friendly with visitors,”

Did it occur to Mr Jumaa that the lioness was a wild animal?? And not intended to be “friendly” with somebodies snotty nosed kids? Probably not, hey? Despite Falestine still having a full set of teeth the zoo proudly sold the idea that visitors will be able to play with the lioness, who, although young, was still a wild animal and a predator. I wouldn’t risk my chances.

The so-called “vet” that declawed Falestine claimed that the animal had not suffered cruelty, saying;

‘We want to bring smiles and happiness to children, while increasing the number of visitors to the park, which suffers from high expenses.’

However, animal charity Four Paws disagreed that this operation was without risk and wouldn’t have later, negative impacts on the young lioness;

‘For big cats, removing the claws is a particularly vicious procedure which causes long-lasting damage.

‘Natural behaviour, such as grabbing food or climbing, is hardly possible without an animal’s claws. Since the amputation was not done in a proper vet clinic, the chance of infection is high.’ If you were in any doubt as to who to trust it might help you to know that the Rafah Zoo had been known to keep animals in ‘deplorable’ conditions, with four newborn lions freezing to death there.

So you do the math on which source you trust most…

Four Paws detailed the history of the zoo as such;

“At the beginning of 2019, Gaza’s oldest zoo in Rafah attracted worldwide attention. Four lion cubs froze to death there due to the harsh weather and poor keeping conditions. Only a few weeks later, a 14-month-old lioness was forever mutilated by the brutal and unprofessional removal of her claws. The owner of the zoo announced that he would also remove the claws of her brothers – if necessary without the help of a veterinarian.” But this story has a happy ending.

Four Paws were able to step in and recently rescued all of the animals at Rafah Zoo. Veterinarian and head of the Four Paws initiative had this to say;

“We are happy to finally put an end to this horror. For far too long, the animals of Rafah Zoo have had to live under unimaginably dreadful conditions. Evacuating more than 40 animals in just a few days will be a logistical, mental and physical feat – it is our biggest rescue mission to date” Thank goodness Four Paws stepped in and saved these precious animals. Marion looks much happier in her current living situation.

Rafah Zoo has been left with the empty cages it deserves, hopefully, Four Paws excellent rescue efforts will have given the owner and supposed “vets” an opportunity to reflect on their grotesque actions.

Well done to Four Paws and I wish Marion and all the other animals a happy and healthy life being properly cared for.

What did you make of this story? Are you an advocate for animal rights? Let me know all about it in the comments below!