California Proud: TikTokers who live in the Golden State 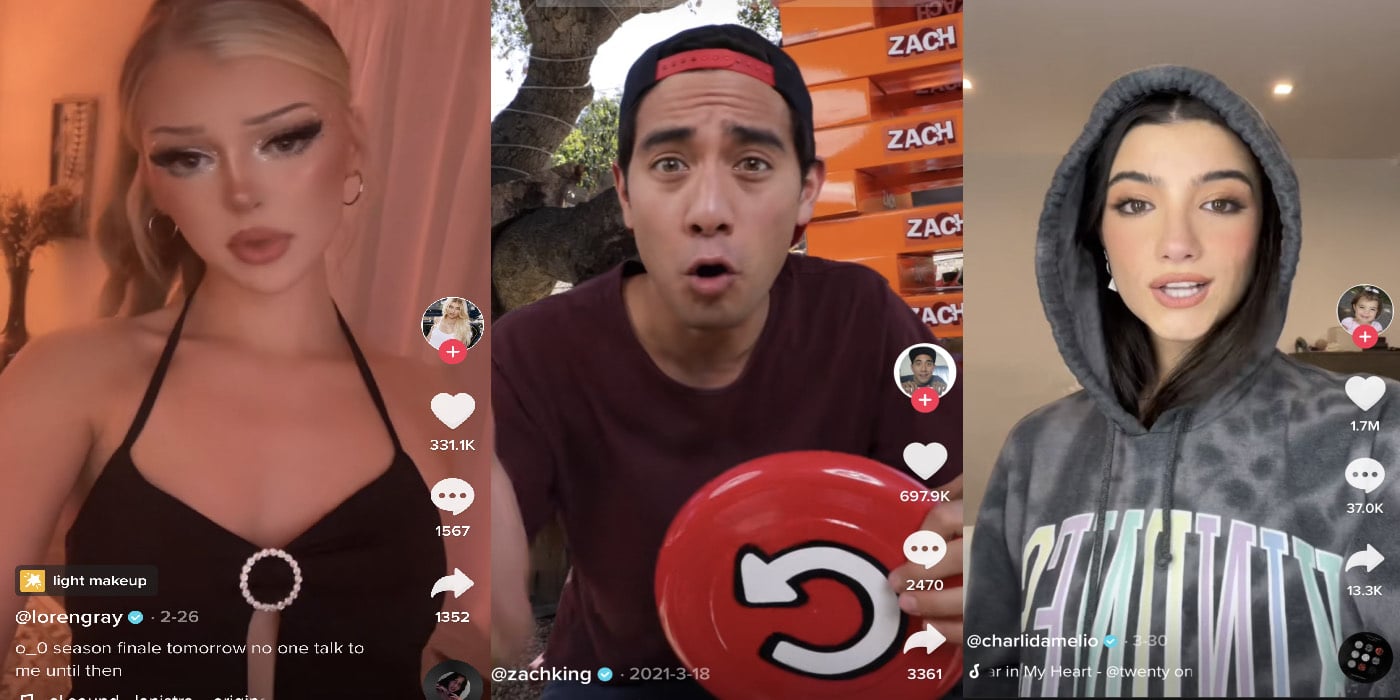 Why California? Simple question, unsure answer. Why is it that most of the entertainment industry, whether it be movies, music, and now social media, is based out of the Golden State? How come Illinois or Florida wasn’t made the designated state to produce 99% of the world’s creative projects? Texas is big and has plenty of room for everyone. Why not there?

In terms of Hollywood, at least, the motive is clear: California is sunny and warm (and was, during the golden age of movies, spacious). It made sense for film production companies to operate from somewhere they would never be subject to unpredictable, bad weather or bustling traffic. Hot, bright weather means you can shoot all year round. As for music, it just kind of followed suit – a case of “well, if they’re there, why shouldn’t we be?”

In terms of TikTok creators, thanks to the rise of content collectives that live and work together, California has become a Mecca for anyone looking to make it big. Out of the top most followed accounts on TikTok globally, ten are based California. That’s even when you discount the likes of established celebrities such as Will Smith, Jason Derulo and Billie Eilish.

So who are these top ten? What do they do? And where did they come from? In a lot of cases, the answer isn’t California… 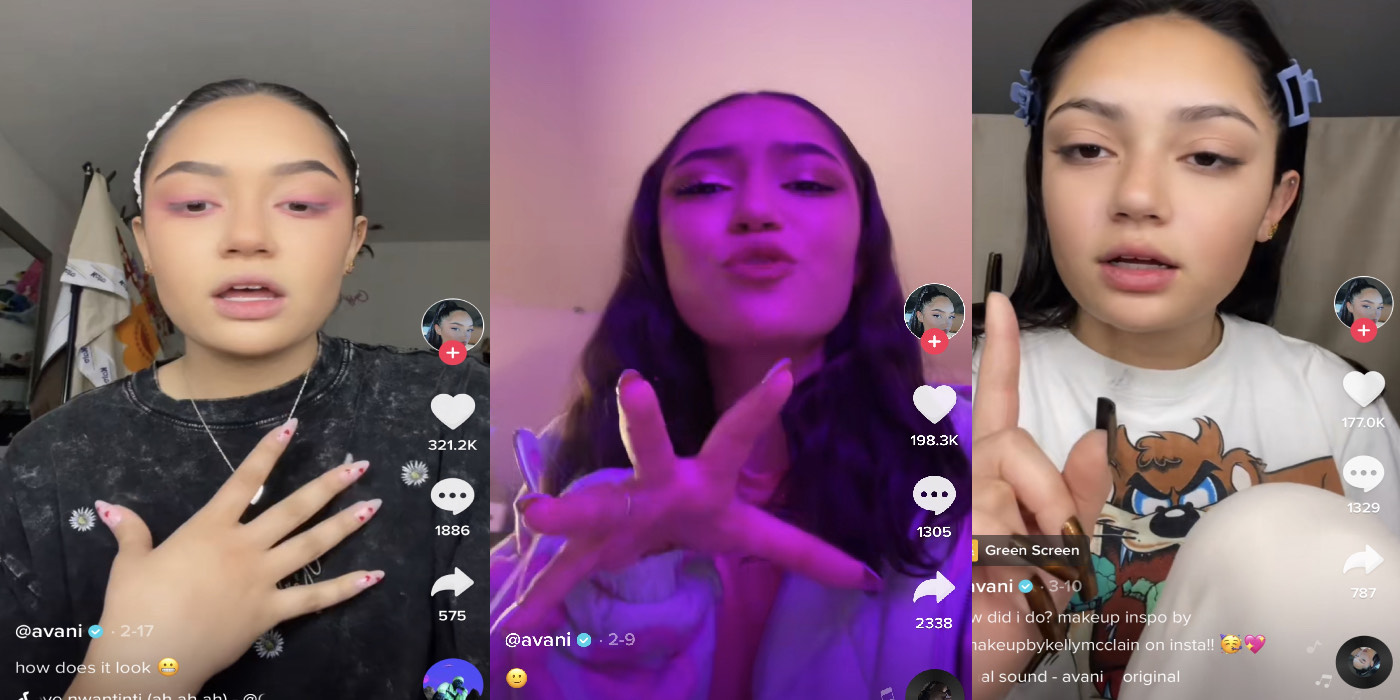 Originally known by “Clown Girl” thanks to her Harley Quinn-inspired make up tutorial, Avani Gregg is now a certified TikTok success with 40.5 million followers. Starting out life as gymnast, the 19-year-old could never have predicted the turn her life would take at the end of the 2010s.

After growing up in Brownsburg, Indiana, Gregg moved with her mum to Los Angeles in 2019 to join the content collective The Hype House. In December 2020, her entire family followed. She has been based in California ever since, creating makeup videos that have been viewed by 2.7 billion people. 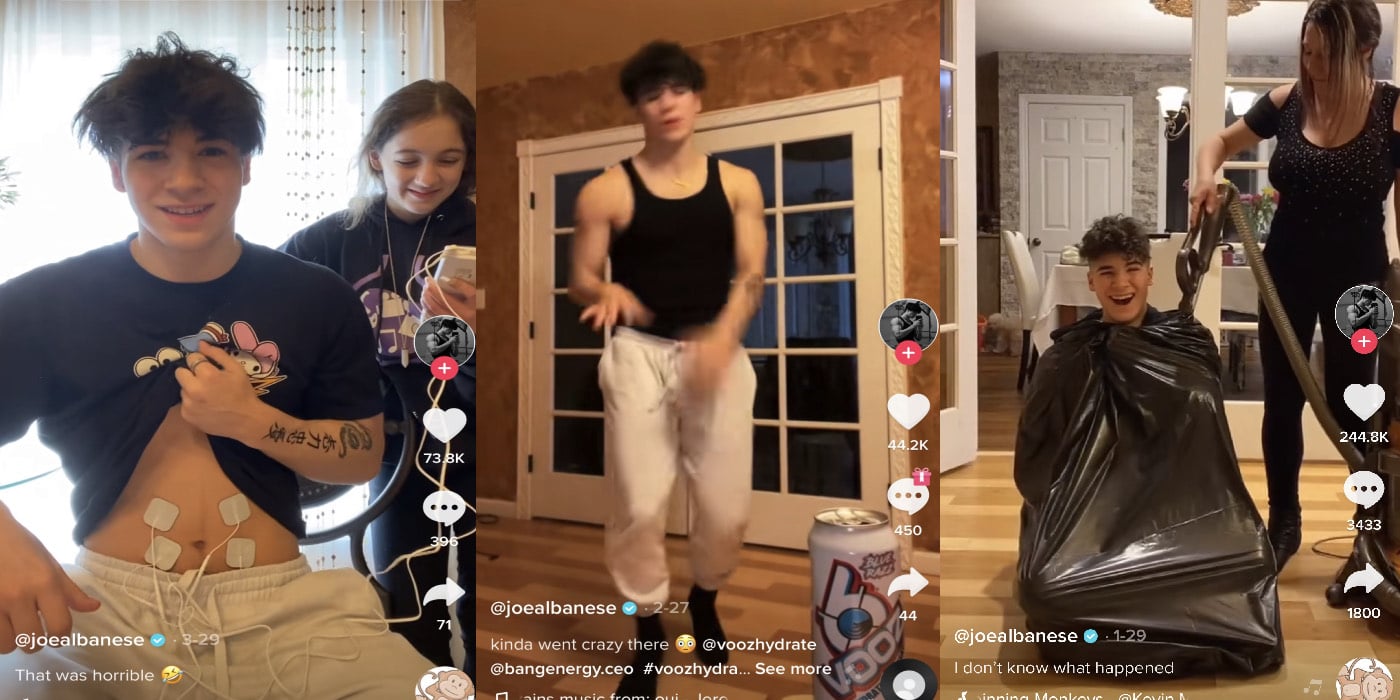 Joe Albanese shot to fame on TikTok when he started posting comedic videos with his mother Denise and his sisters, particularly Bella. One video of him break dancing in his kitchen, however, really stood out and propelled him to heights no Albanese had ever seen. His TikTok account is now followed by 40.5 million people.

Albanese was born in Connecticut in 2001 but moved to Los Angeles to support his career with fellow influencers Hailey Orna, Josh Richards and Bryce Hall. His family made the journey too, ultimately getting in on the action themselves. His younger sister in particular has since created a separate TikTok account that enjoys decent success. 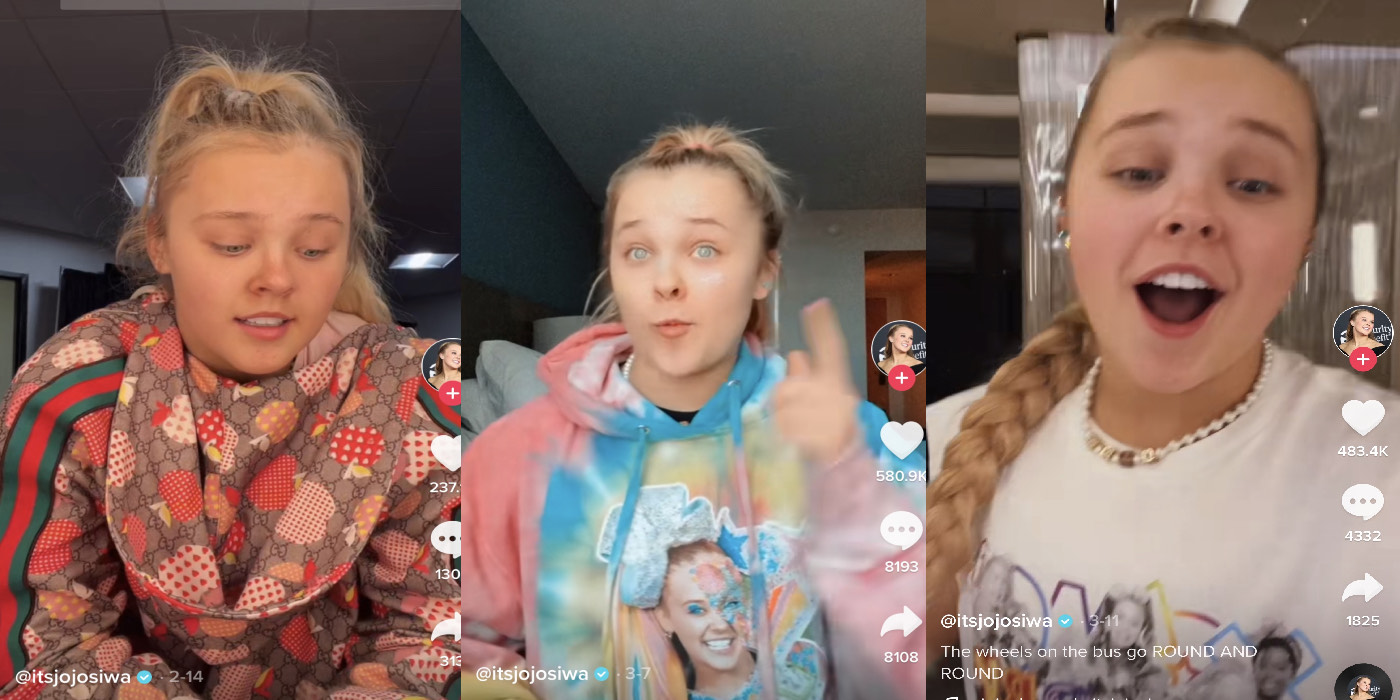 JoJo Siwa’s fame predates TikTok, dancing long before it became a social media sensation. She was a top-5 finalist on the second season of Abby’s Ultimate Dance Competition. But that wasn’t enough. The hunger within Siwa proved too strong and, in 2016, she released an anti-cyberbullying song titled Boomerang that notched up 900 million views and 2.5 million likes. So, by the time she hopped over to TikTok, gaining a following was never going to be hard.

Siwa was born and raised in Omaha, Nebraksa in 2003, however in September 2021 it was revealed she had bought a $3.4 million home in Tarzana, California. This month she was announced as a judge for the seventeenth season of So You Think You Can Dance. She has 40.9 million followers on TikTok. 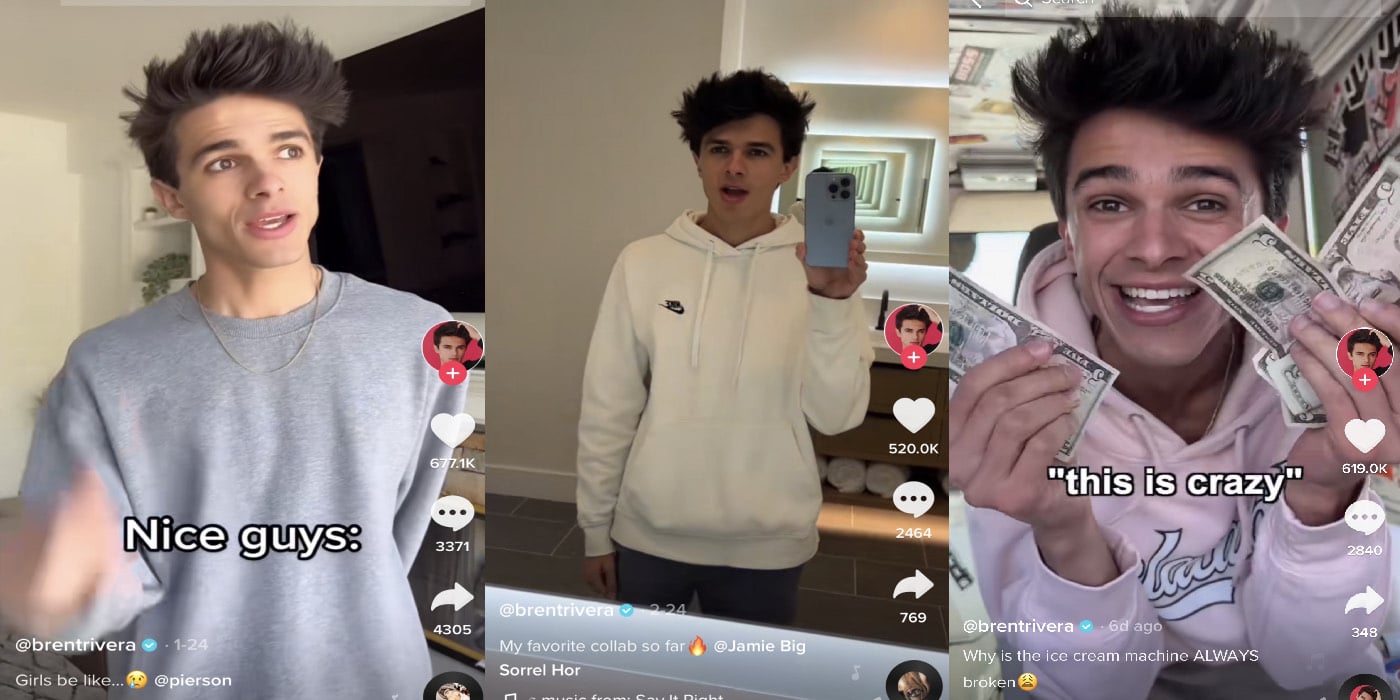 With a name like that, how can you not live in California? This social media personality and actor found fame in 2009 after creating a YouTube account but it was with the jump to Vine in 2013 that things really started to heat up. At the peak of his Vine powers, Rivera boasted 8.5 million followers. Of course that’s nothing compared to his count of TikTok followers, which currently stands at 42.9 million people.

Rivera was born and currently resides in Huntington Beach, California. He is the co-founder and CEO of Amp Studios, a ‘talent incubator’ and content group. His content is generally stunt-related. In a recent TikTok, he is shown solving the McFlurry machine crisis by buying an ice cream van and parking it outisde a McDonald’s to make up for the lack of frozen goodness. 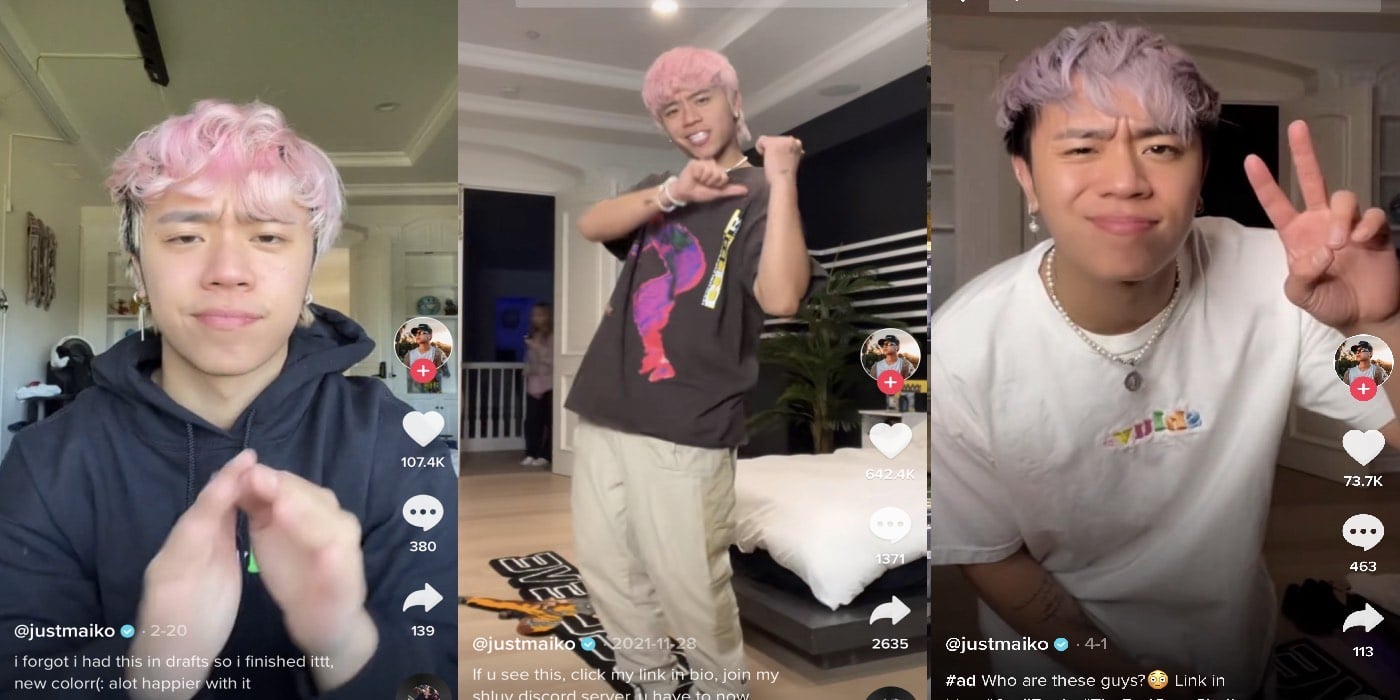 Michael Le, AKA JustMaiko is an American dancer, choreographer and TikTok OG. He joined the app in its early Music.ly phase back in 2016 when the likes of the D’Amelio sisters were still babies. Well, not babies, but pretty green. Le is best known for his dancing videos and tutorials but is also a keen vlogger and photographer who documents almost every day of his life in some way.

Le was born in Florida in 2000 but moved to Los Angeles in 2020 with four of his friends to form the social media collective Shluv House, where the five live and create content on an industrial scale much to the joy of their fans. Le in particular has 51.5 million followers on TikTok. 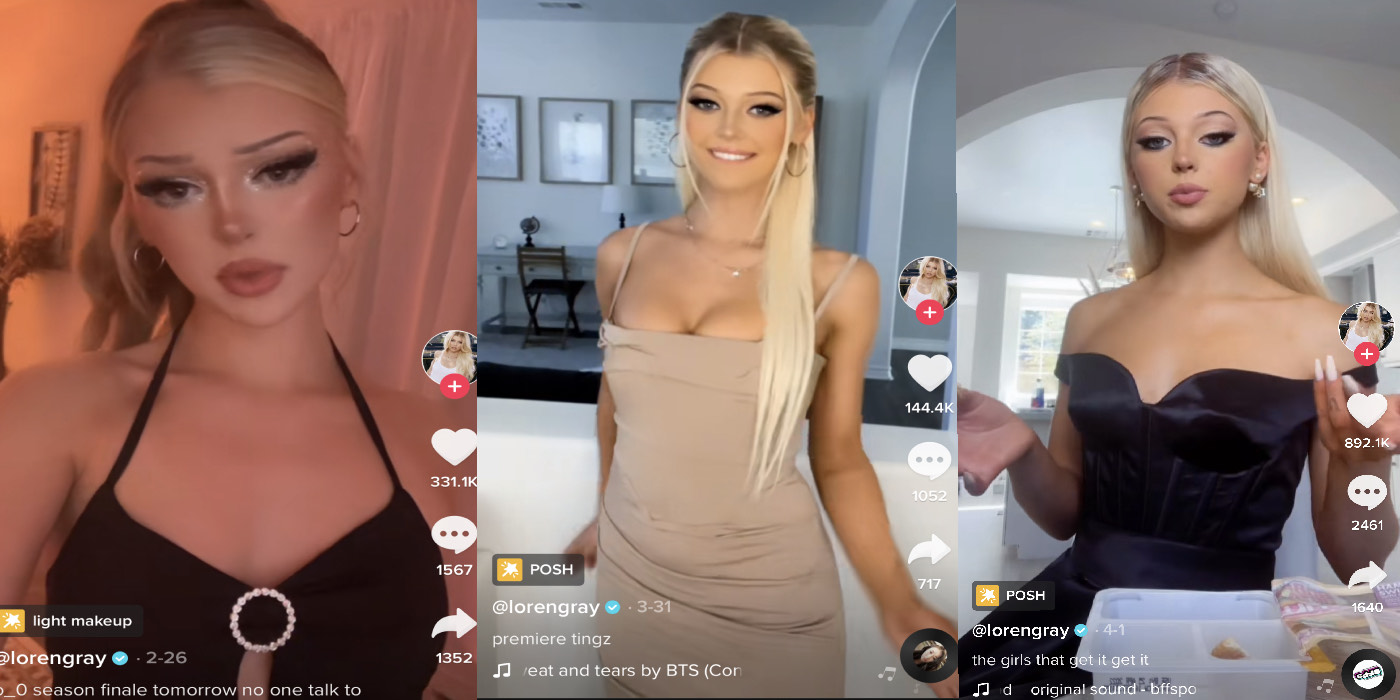 Loren Gray is an American model, singer and social media hotshot. She was the most followed TikTok creator between March 2019 and March 2020 after signing up in 2015. She was nominated for a fan-voted Choice Muser in 2016 and again in 2018, when she released her debut single My Story with Virgin Records. Gray was subsequently nominated for a Music Social Star at the iHeartRadio awards. Today though, you’re more likely to know (and see) her through TikTok, on which she has 54.4 million followers.

Born in Pottstown, Pennsylvania in 2002 before making the move to Los Angeles to pursue her dreams, Gray is estimated to be worth $5 million thanks to her efforts. On top of her TikTok and music career, she also has her own jewellery brand called ‘&always’ which was launched in December 2020. 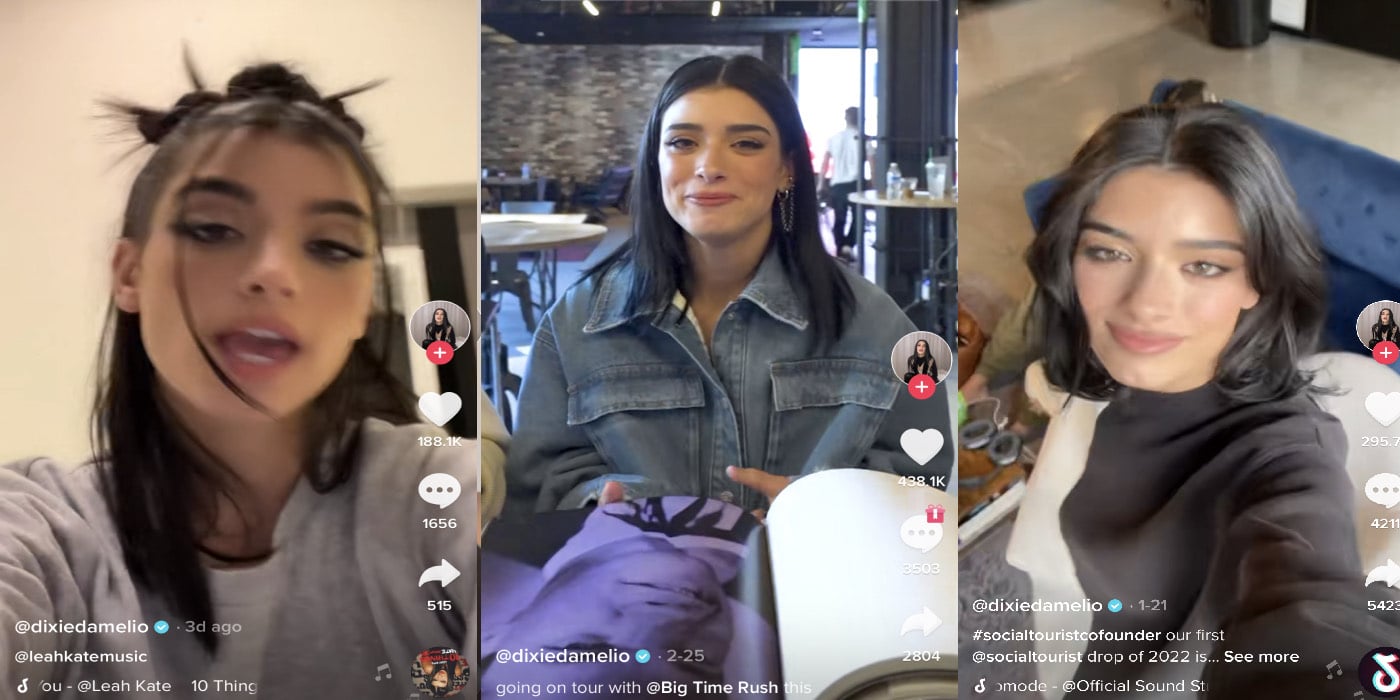 Dixie D’Amelio is an American social media personality and TikTok superstar. The older sister of Charli D’Amelio - the most followed person on TikTok - Dixie has 57.2 million followers herself, which doesn’t exactly make her second fiddle. The two are known for their collaboration videos on the app. Off the back of her singing, D’Amelio signed with HitCo Entertainment in 2020. She also hosts a YouTube talk show called The Early Late Night Show.

Dixie was born in Norwalk, Connecticut in 2001 but is now based in Los Angeles. She got her own pad in 2020, sharing a glimpse of her new apartment in a video tour. In it, D’Amelio revealed she prefers to hand wash her dishes after her dishwasher malfunctioned and shot bubbles all over the house. 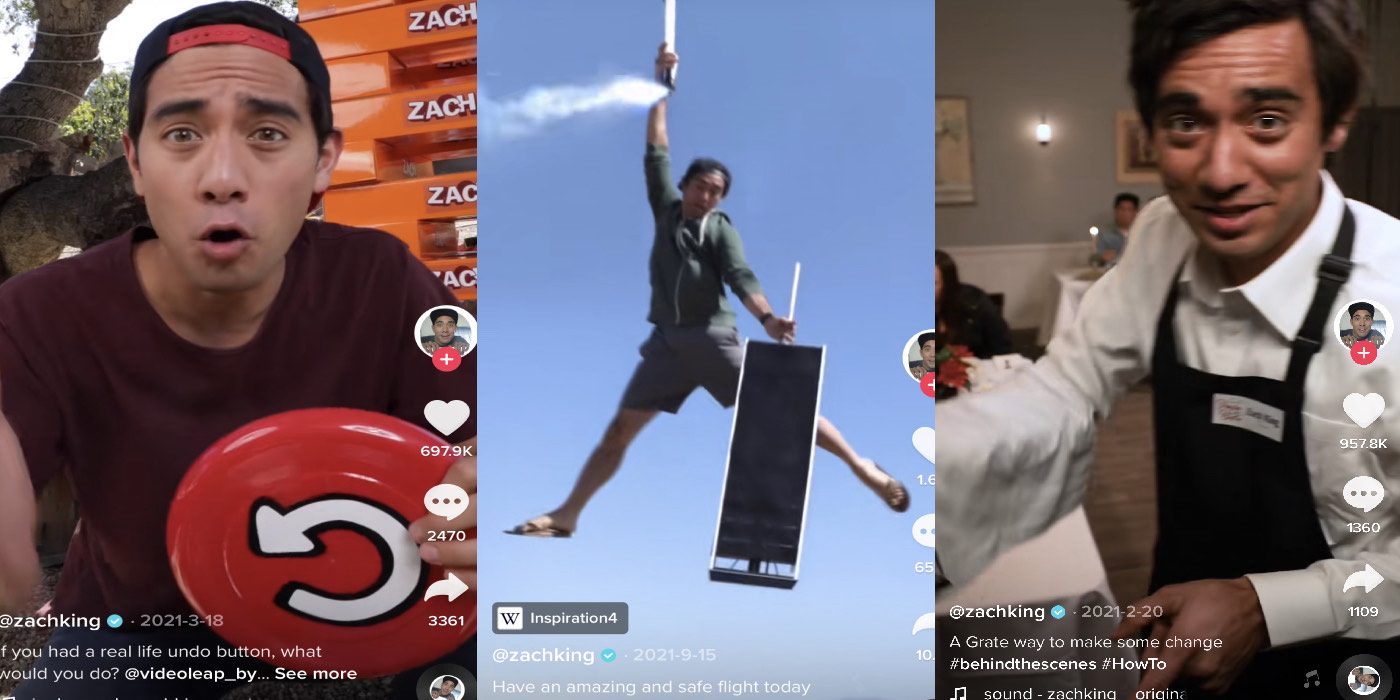 Zach King is an American social media performer, filmmaker and illusionist. Unlike the majority of the creators on this list, he has a specific brand of content as opposed to a scatter-brained “whatever’s trending” approach. King began posting, like many of his contemporaries, on YouTube way back in 2008. He jumped to Vine in 2013, becoming known for his “magic vines.” Today, he’s mainly found on TikTok entertaining his 68.1 million followers with optical illusions.

King was born in Portland, Oregon in February 1990 though now bases himself in Los Angeles. He was Chinese heritage from his father’s side and Austrian and Nicaraguan from his mother’s. In 2017, he launched his own series of children’s magic books that come with their own augmented reality app. 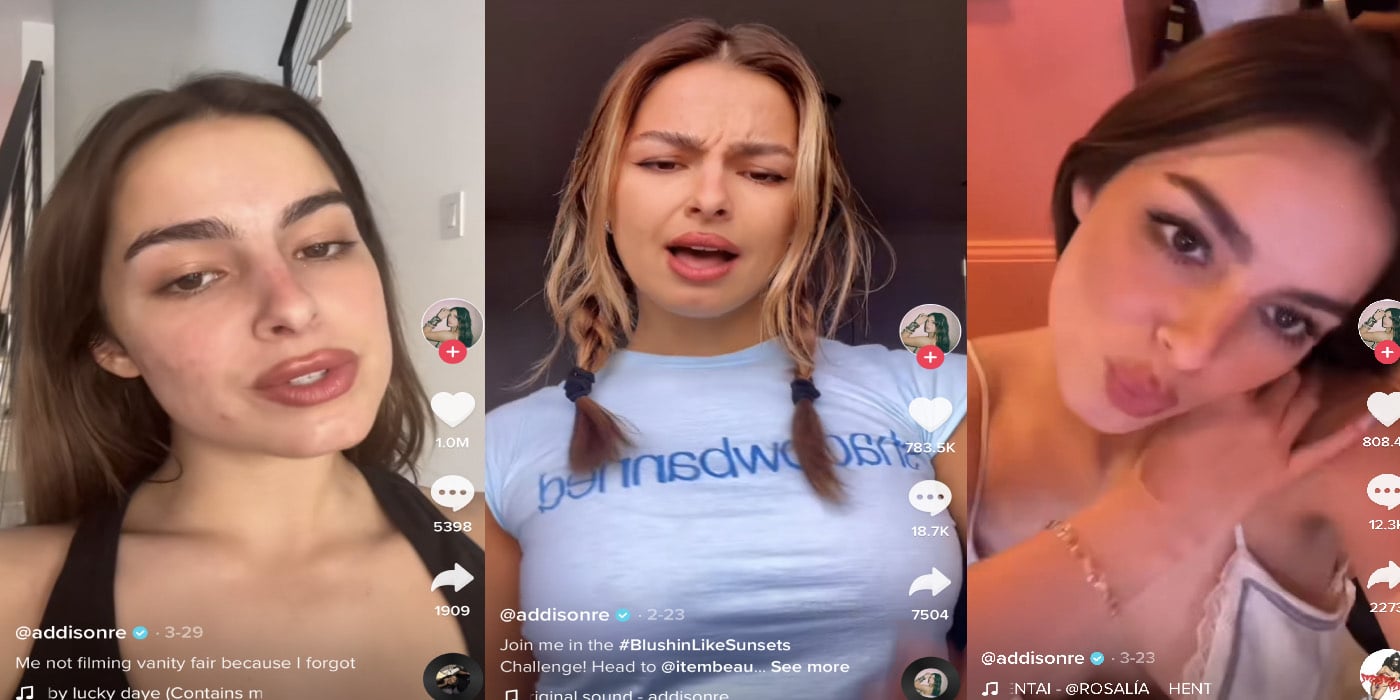 TikTok without Addison Rae would be like basketball without Lebron, movies without Tom Hanks, IKEA without meatballs, Christmas without stomach cramps. It just wouldn’t be right. Rae is virtually synonymous with TikTok. Wherever she goes, it goes, and vice versa. This was never the plan. Rae originally joined the app for a laugh. Then she started posting hair and makeup routines. One day, she lip-synced to Mariah Carey’s ‘Obsession’ and set the online world alight. It would prove a fitting title given her subsequent popularity.

Rae was born in October 2000 in Layafette, Louisiana. In 2019, she relocated to Los Angeles to co-found and fund the content collective Hype House with the likes of the D’Amelio sisters and Chase Hudson. While no longer living at the mansion, Rae continues to live and work in the California. Her TikTok account has 87.3 million followers and 5.7 billion aggregated likes. 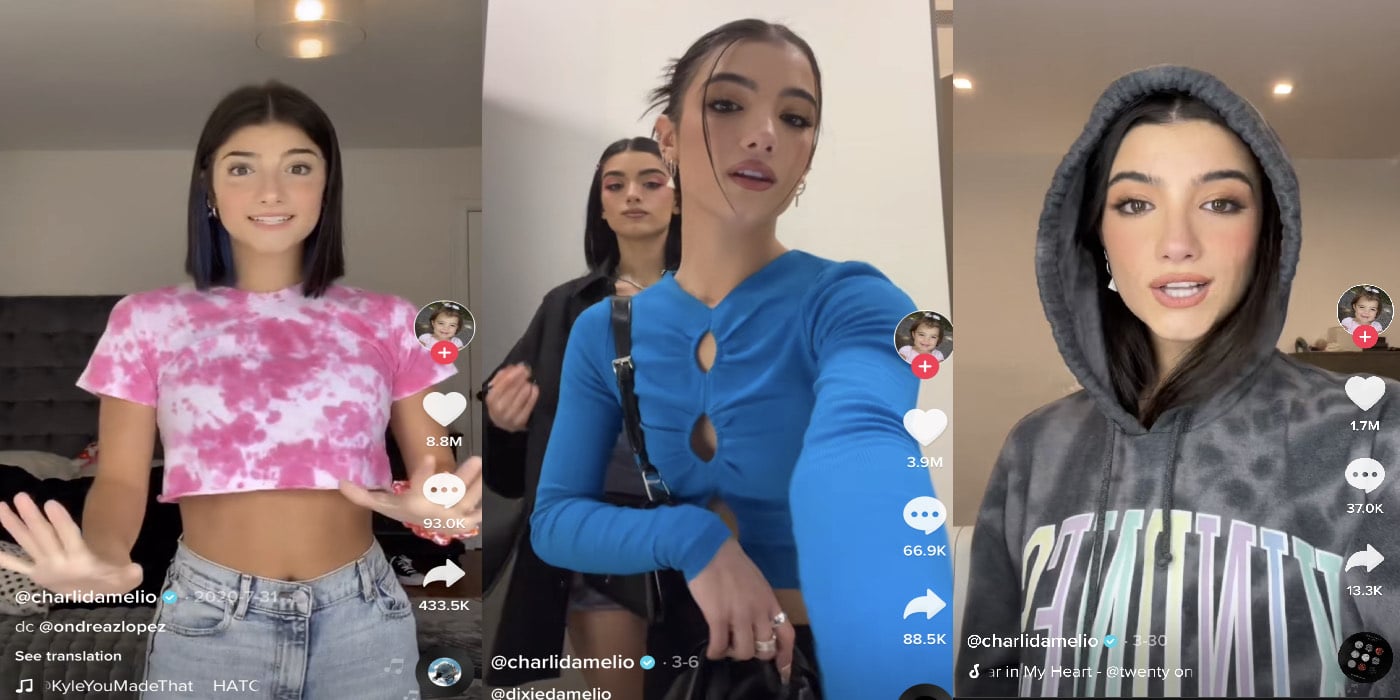 Trying to decipher what makes Charli D’Amelio TikTok’s most popular creator is a fool’s game. Why is it that the top spot belongs to her and not somebody else on this list? Somebody like Loren Gray, another young female? It’s hard to say. D’Amelio isn’t doing anything that isn’t and wasn’t being done by a million other users, it just so happens the algorithm blessed the lives of her and her sister, Dixie. These days, D’Amelio’s content isn’t so restricted by her dance video origins: her cachet is so big, merely showing her face is enough. Charli D’Amelio is famous for being Charli D’Amelio.

Her career began in the summer of 2019 and has been on an upward trajectory ever since. She currently has 139.1 million followers. Born in May 2004 in Norwalk, Connecticut, D’Amelio moved to Los Angeles to co-found the Hype House content collective. Though she left in 2020, she continues to live and work in the City of Angels.