Catfish Offered Teen $9m To Kill Her Best Friend... And She Did It 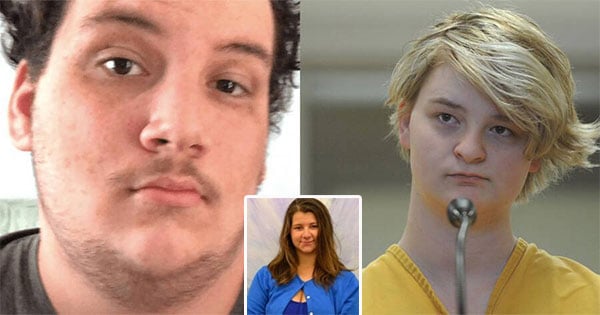 Most of us can relate to doing everything we can to protect our best friends from danger and having their back ’til the death! Well, not in this case…

A teenager from Alaska has been accused of killing her best friend, following a money bribe from an online stranger posing as a tycoon.

The catfish offered the teen the cash to carry out the murder and the teen in question, Denali Brehmer, allegedly did just that.

The 18 year old, of Anchorage in Alaska, is thought to have taken the life of her ‘best friend’, Cynthia Hoffman, 19, following the bribe. So how did it all unfold? Online imposter, Darin Schilmiller, 21, lured the impressionable teen in with the promise of $9m (£7m), if she’d kill her best friend.

The man, from Indiana- 4,000 miles away from the girls- created the fake personna behind which is carried out the bribe.

The Evil Force Behind The Scenes.

To make this story even more wrenching, Ms Brehmer is thought to have send Snapchat videos of the murder unfolding to the ‘tycoon’, as evidence to claim her money. Prosecutors of the case say this should act as a warning for parents of teens who may be being brainwashed online, putting themselves and others in danger.

Bryan Schroder, the US Attorney for the District of Alaska, told a news conference on Tuesday:

“For all of the good the internet can do, it can be a dark place and parents would be wise to monitor the activity of their children online.”

We’re already well aware that still in this day and age, people pose as others online, but stories like this really does open our eyes to the extremes some are capable of.

According to court papers, Ms Brehmer actually confessed to the killing of her best friend on a hiking trail on 2 June.

The Face Of Evil. Posing as ‘Tyler’, the millionaire tycoon from Kansas, Mr Schilmiller had spent months bating Ms Brehmer, with the end goal now being revealed when it’s too late to correct.

Investigators revealed they had uncovered phone evidence of Ms Brehmer and Mr Schilmiller ‘discussing a plan to rape and murder someone in Alaska’. Following the conversations and meticulous plans put in to place, the 18 year old recruited friends to help in exchange for large amounts of blood money.

The victim, known as “CeeCee”, was brought to Thunderbird Falls in Anchorage by the killers on the fatal day. The friends had taken her in a pick-up truck under the disguise of a ‘hiking trip’.

The more you learn about this story, the worse it gets. It’s believed that the victim struggled with learning difficulties, making her even more vulnerable in such a situation.

“My daughter trusted these people. My daughter just wanted friends. Now I have to bury her.”

The suspects are alleged to have bound the victim’s hands and head with duct tape, before shooting her in the back of the head.

The group then pushed her body in to the Eklutna River, nearly 48km north of Anchorage.

Amongst the group, Kayden McIntosh, just 16, is alleged to have fired the fatal shot. Caleb Leyland, 19, and a juvenile male and female, who have remained unnamed due to age, have also been charged.

Mr Schilmiller also instructed Ms Brehmer to rape her victim before killing her. Although, police say there is no evidence of any sexual abuse.

Indiana State Police interviewed Mr Schilmiller on 9 June. The interview revealed he had blackmailed Ms Brehmer in to sexually assaulting children, by threatening to hand her in to police for the murder of her friend, if she didn’t comply. In a criminal complaint, the FBI’s Child Exploitation Task Force said text messages evidence Mr Schilmiller advising Ms Brehmer on how she should assault her victim.

The cat-fishing ‘tycoon’ is currently awaiting extradition to Alaska to face the charges.

“If you’re listening to my voice, not in Alaska but somewhere else, and you’re sitting in your mom’s basement, and you’re planning to do some type of crime – influence, plan or conduct a crime in Alaska. We will track you down. We will find you. And we will bring you back here to face justice.”

We hope these sick criminals don’t get the honour of seeing the light of day again.