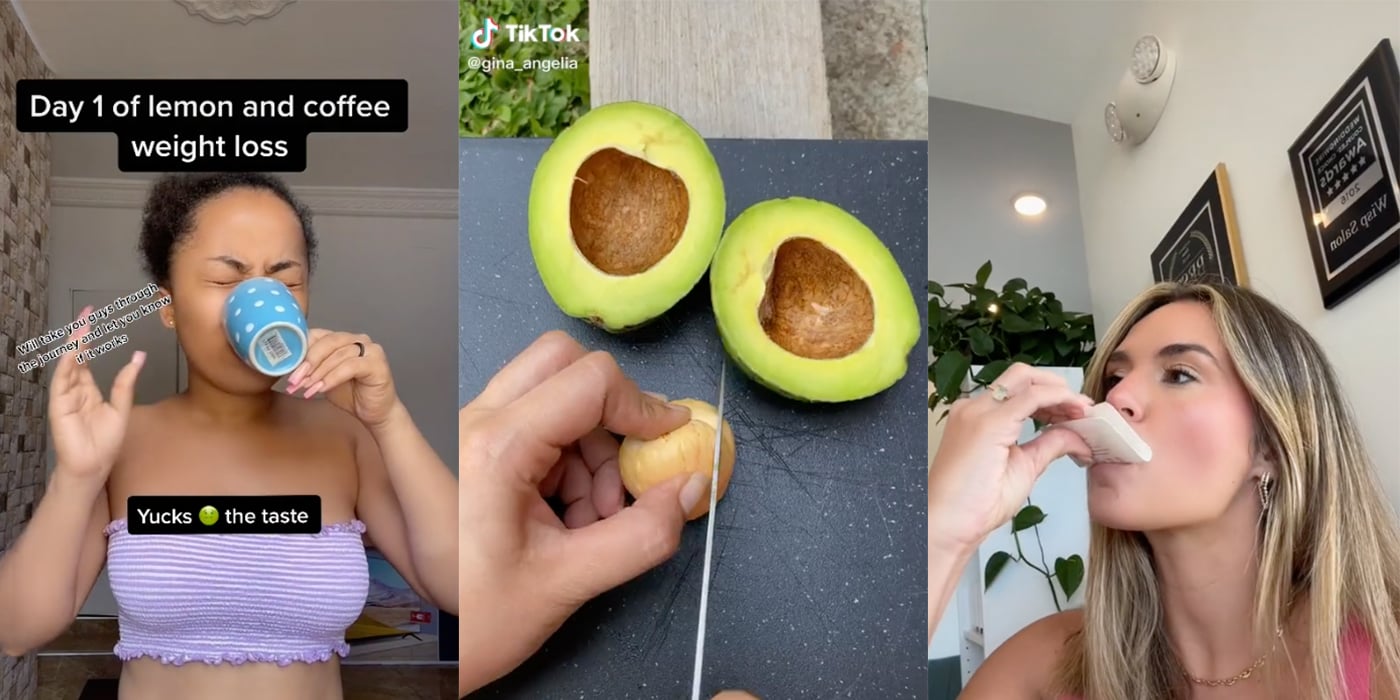 Once upon a time, it was exercise DVDs advertised by minor celebrities; it was magazine clippings that promised the world. Now, there’s a new chapter in the unedifying history of weight loss hoaxes, and it’s all happening on TikTok.

Whatever they might promise, TikTok diets are unlikely to help you lose weight. Some recommendations, such as mixing lemon juice into your coffee, are harmless. However, there are videos and creators that recommend eating dangerously little, with some hoax diets being so controversial they’ve been banned by TikTok.

With hucksters flogging everything from recipes to supplements, drinks and injections, it’s hard to figure out what’s credible and what could do serious harm to your body.

We’re investigating some of TikTok’s top diet trends to see if they pass muster – or if they’re yet more in a long line of get-skinny-quick schemes.

Coffee and Lemon (The ‘Citrus Espresso’) 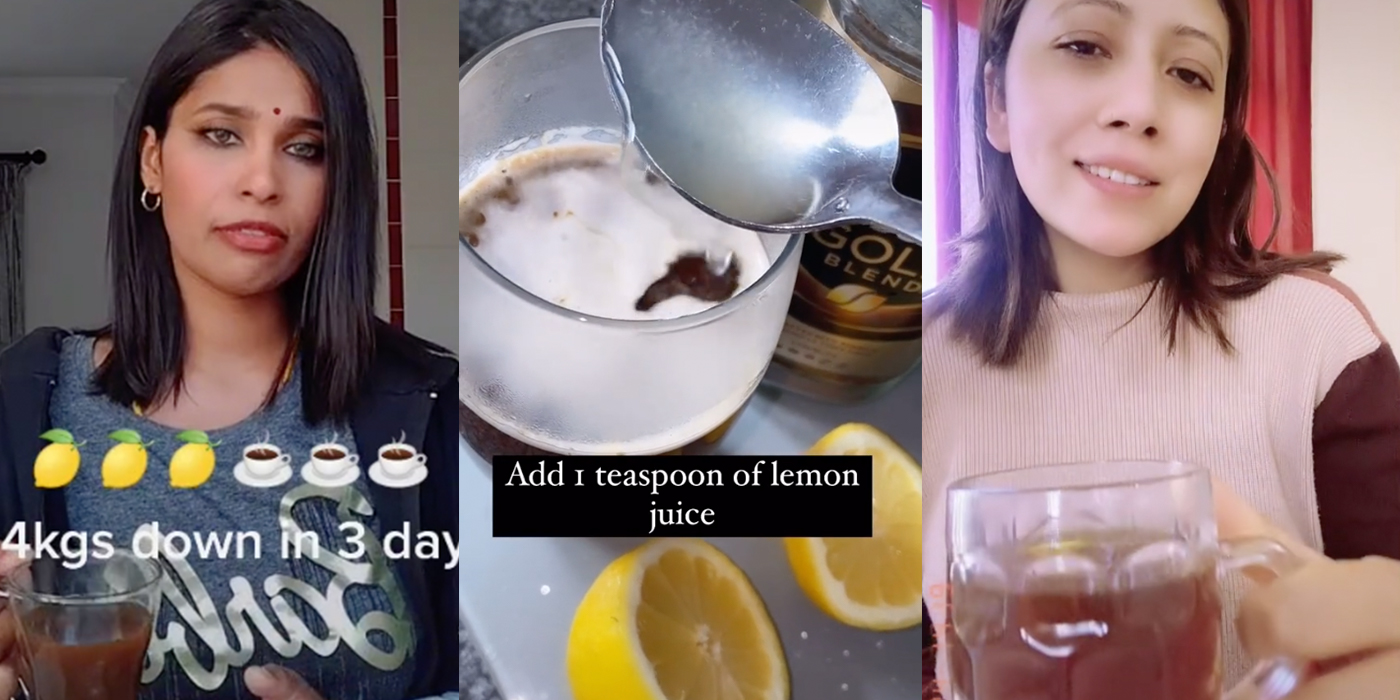 The key to a successful weight loss hoax is to make something seem easy. Simply tweak a small aspect of your life, the diets claim, and your body will be transformed. It also helps if you combine two things that people generally like – and based on 2020’s viral ‘TikTok coffee’ trend (involving whipping coffee into a kind of bitter cream), there’s a highly caffeinated audience ripe for exploitation. That’s led to a resurgence of the idea that simply mixing some lemon juice into your morning coffee can “melt belly fat” away. So, is it true?

There is no evidence to suggest that mixing lemon and coffee can burn belly fat. While it might be a huge TikTok trend, with the #coffeeandlemon tag garnering more than 24.3 million views, nutritionists assert there is no significant link between lemon, coffee, or fat. Any resultant weight is likely due to a placebo effect or greater hydration.

So where did the trend come from? It might derive from the more longstanding practice of drinking lemon water, with TikTok’s diet pedlars incorrectly assuming that lemon is a magic ingredient. Adding lemon to water does confer some benefits (after all, lemon is a Vitamin-C-rich citrus fruit), but any weight loss effect is pure bunkum.

In reality, it’s the fact that drinking more water can make you feel fuller, leading to you eating less, that’s behind any observable change in weight. 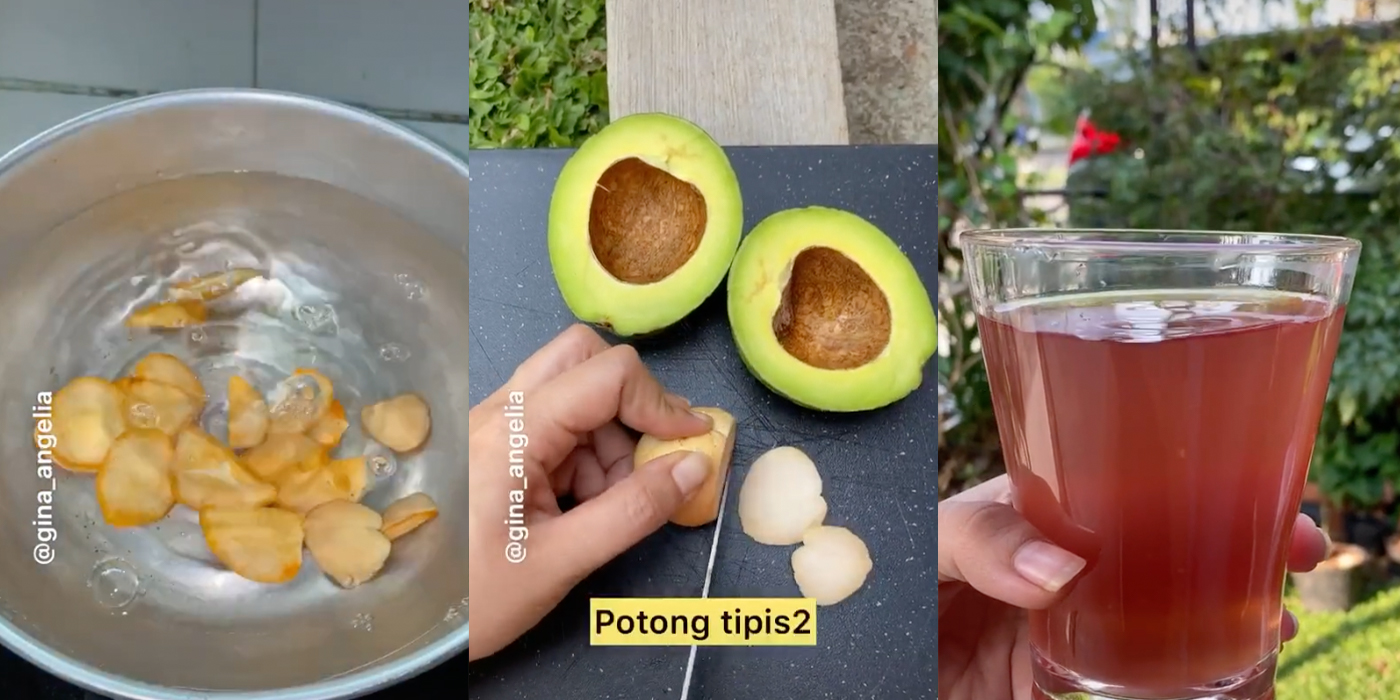 Avocadoes – is there anything they can’t do? The ‘alligator pear’ has gone from strength to strength in recent decades after the California Avocado Commission (yes, really) hired a PR firm to transform the fruit’s image from a niche ingredient to a superfood staple. Nowadays, the avocado is synonymous with a luxurious, if slightly oddball millennial lifestyle. However, the creamy, green guacamole ingredient was dealt a serious blow when its high fat content became common knowledge. While it’s worth noting that the avocado is in fact healthy in all sorts of ways, the pressure was on for food bloggers to find a new way in which avocado can help you drop pounds. Step forward avocado seed tea.

Prepared by slicing the seed (or stone) of an avocado into thin strips, and then infusing in boiling water, it’s claimed that avocado seed tea is a way to imbibe the nutrients of an avocado without consuming the high-fat flesh of the fruit.  It’s also thought that it can promote digestion and work as an anti-inflammatory. However, none of these claims have a scientific basis.

Avocado seed tea is mildly popular in Turkey, Indonesia and Asia as a gently nutty beverage. However, the idea that it magically inspires weight loss is entirely false. Still, if you’ve ever wondered what you could possibly do with the big wooden ball inside your avocado, now you know!

Despite the complete absence of scientific backing for the avocado seed’s weight loss properties, a TikTok video posted in 2020 garnered more than 750,000 likes for such an assertion. 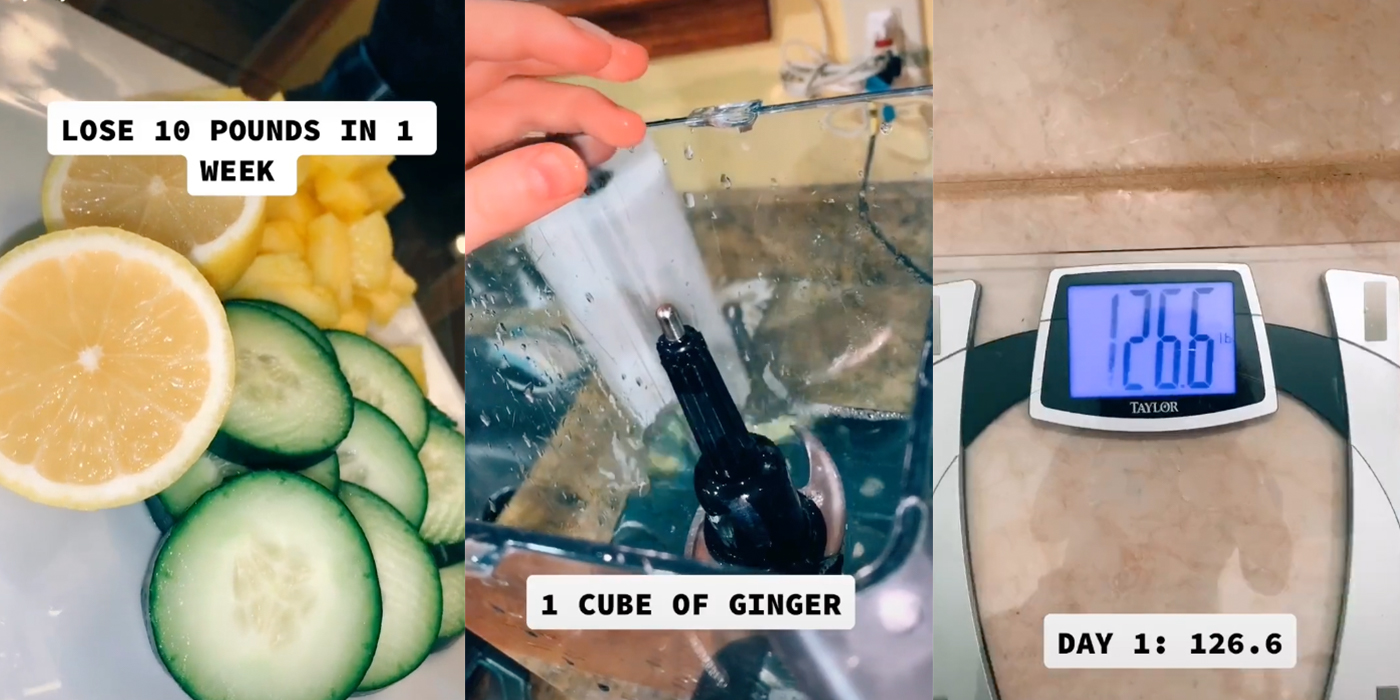 Far be it from us to criticise the refreshing taste and vitamin benefits of a smoothie, but there’s no doubt that including flavourful or exotic ingredients has long been touted as a miraculous weight loss trick. Ginger, with its fiery taste, unusual appearance and powerful aroma, is an especially common culprit.

Despite ginger’s intense, ‘hot’ taste, there is no evidence to suggest that the plant actually helps burn body fat. Ginger, a vasodilator, does in fact increase blood flow and slightly raise body temperature, but the mere addition of ginger to a smoothie or dish will have no noticeable effect on weight loss.

There’s no question that everyone could do with eating more fruits and vegetables. The memorable instruction to eat ‘5-a-day’ is, in actuality, nowhere near enough for perfect health; instead, it’s the minimum that the World Health Organisation thinks the average person might achieve. So – while there’s no explicit link between weight loss and pineapple, ginger, or any other kind of fruit or vegetable – drinking such a smoothie is at least one way to be healthier.

Still, videos, like this one, that claim a smoothie can help you lose 10 pounds in a single week, including an absurd shot of some scales, are entirely false and promote both unrealistic expectations and body negativity. 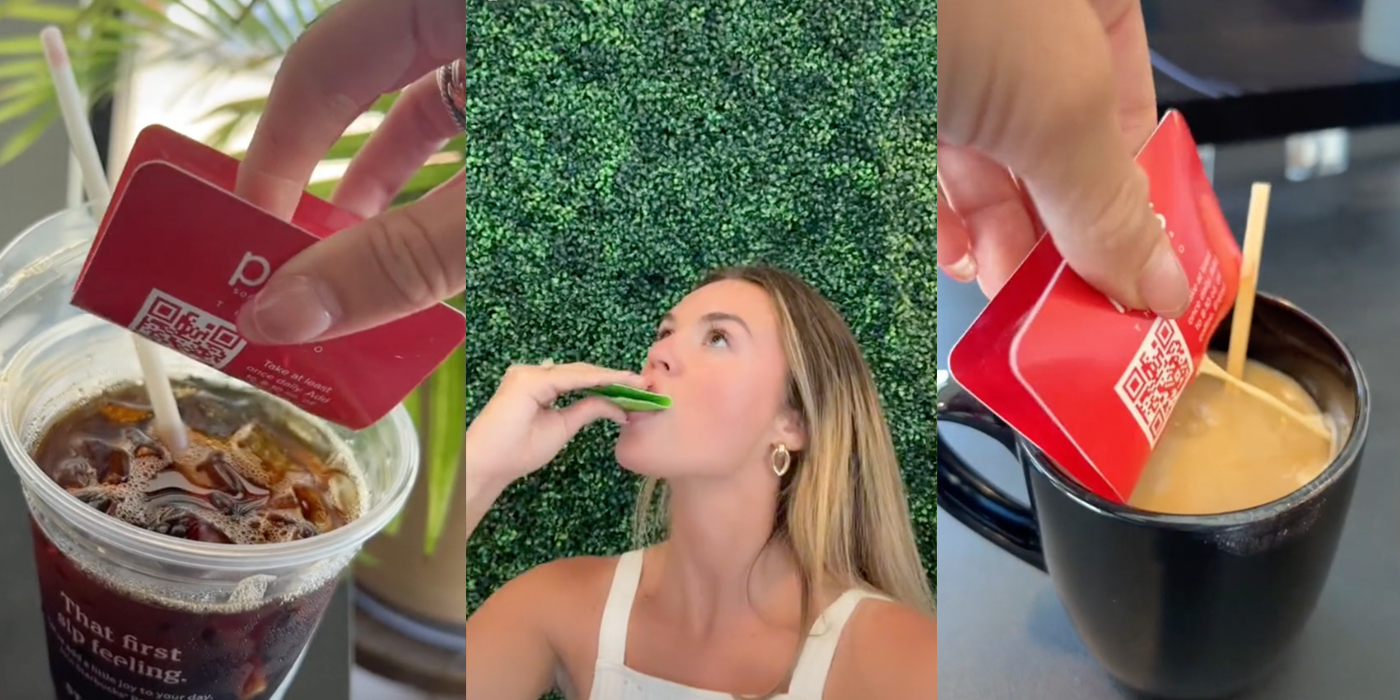 It was a banner day in the hoax diet industry when one plucky ‘expert’ realised losing weight isn’t just about what you put into your body, but what comes out of it. So began the trend of packaging up laxatives in all sorts of glitzy, high-end ways. You, too, can feel like a Hollywood star as you spend a significant portion of your day in the bathroom.

Promoted by Velovita, so-called ‘TikTok Snaps’ are liquid supplements that claim to expedite weight loss. It’s claimed that the ‘snaps’ contain digestive enzymes that burn fat, but their main ingredient is a laxative. This is not a healthy way to lose weight, despite the #velovita hashtag accruing more than 2.2 million views on TikTok. Always consult your doctor before taking laxatives.

Velovita describes itself as “a worldwide movement of people realizing their greatest potential by providing an environment whereby technology and tradition unite to create a platform for everyone to thrive.”  If you hadn’t already guessed, the company is in essence a Multi-Level-Marketing scheme (MLM) in which vendors purchase stock in the hopes of selling it on to family and friends; in fact, the main aim is to persuade family and friends to also purchase stock, leaving Velovita with exorbitant profits and consumers with products that have dubious resale value.

There’s no denying that taking laxatives will lead to weight loss. However, this can have dangerous and even fatal effects. Laxative abuse has claimed lives and led to long-term addiction and body disorder issues. The prevalence of such products on TikTok led to the app cracking down on weight loss content in February 2022. 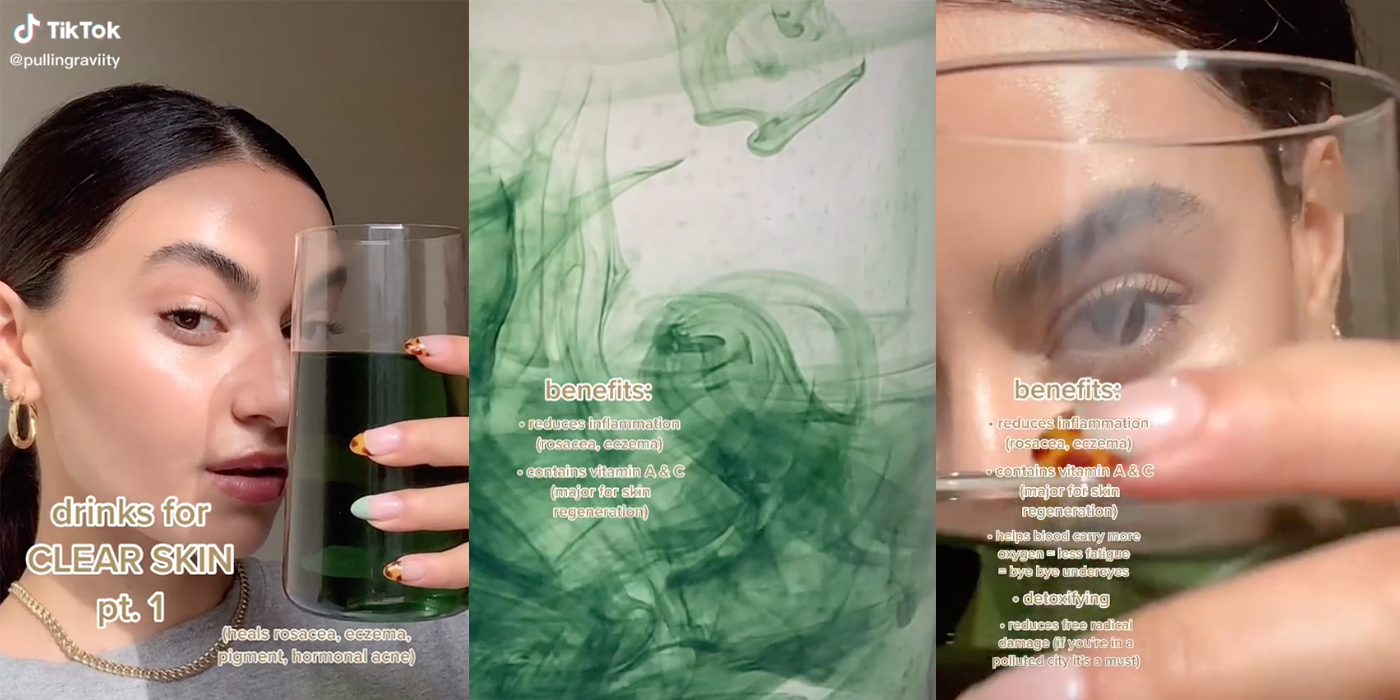 Chlorophyll: it’s great for plants, and we’re plants, so it must be good for us! Hold on. Sorry, I’m being informed that we’re actually not plants, and the so-called ‘miracle product’ could be doing more harm than good to the adherents of this bizarre diet trend.

Chlorophyll is a pigment that gives plants their green colour, typically aiding in photosynthesis. While some dieticians claim that consuming liquid chlorophyll can reduce fatigue, induce weight loss and tackle acne, there is no scientific consensus to suggest that chlorophyll can have such an effect.

A classic fad, there are a number of small studies that proclaim the benefits of drinking chlorophyll – or, more accurately, chlorophyllin, a mix of water and salts derived from chlorophyll. However, any health benefits are limited and incalculably far from the mindbending results TikTok users have supposedly achieved. Plus, you probably consume a lot of chlorophyll already, simply through a generally healthy diet that includes green, leafy vegetables.

So what’s the risk? The truth is that consuming chlorophyllin is harmless. The worrying part is that supplements are hugely underregulated in the United States, meaning there’s a significant risk that your chlorophyllin in fact contains something else. Whether that’s an impurity that can cause health complications or additional products such as laxatives, it’s always important to be aware of what you’re consuming, especially if obtained from unreputable vendors. 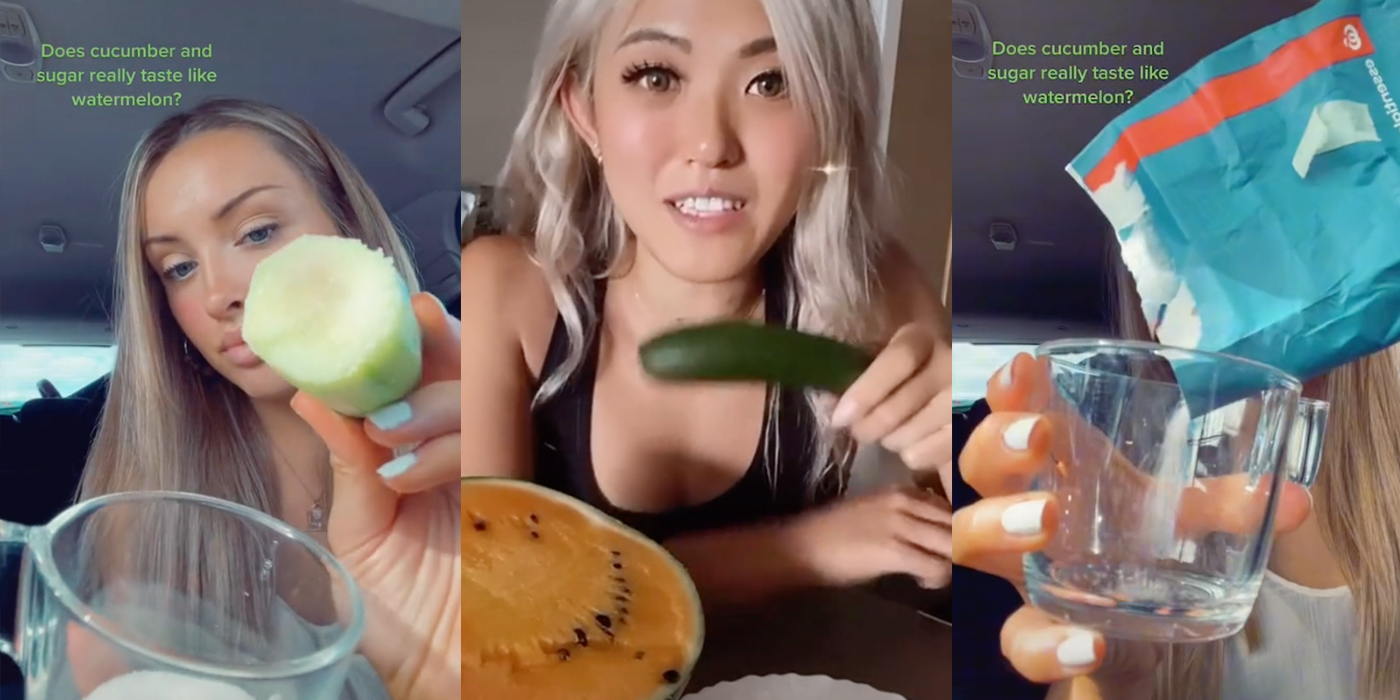 Cucumbers are green, full of water and minerals, and a staple of health and fitness. Used in facemasks, smoothies, and good old nutrient-rich salads, they’re probably one of the first things that come to mind when you think of a healthy vegetable. The only downside is that they can be a little flavourless; indeed, the cucumber sandwich, a former highlight of elegant cuisine, is now seen as a bit dull. So what if we told you there was a way to liven up your cucumbers (in a non-euphemistic way)?

TikTok users claim that dipping a cucumber in sugar will make it taste like watermelon. While the veracity of this claim is subject to your personal tastes, it’s certainly false that this is a healthier alternative to sugar-rich fruits such as watermelons, grapes and apples.

Cucumbers and sugar took over TikTok not as a diet trend per se, but the implicit calculation that you’ll be able to healthily consume far more cucumbers this way has no basis in fact. For one thing, there’s nothing wrong with eating watermelon in relative moderation. While it has a sweet taste, watermelon is actually quite low in sugar, with less than 10 grams in an entire cup of sliced watermelon. That’s roughly equivalent to 150 grains of sugar – and it’s easy to imagine consuming many times more than that while candying your cucumber.

So feel free to try this one out as a ‘food hack’ that tickles your tastebuds. Should it be your new mid-morning snack? Probably not.