Do Snapchat filters work on cats? Here’s a purrfect list 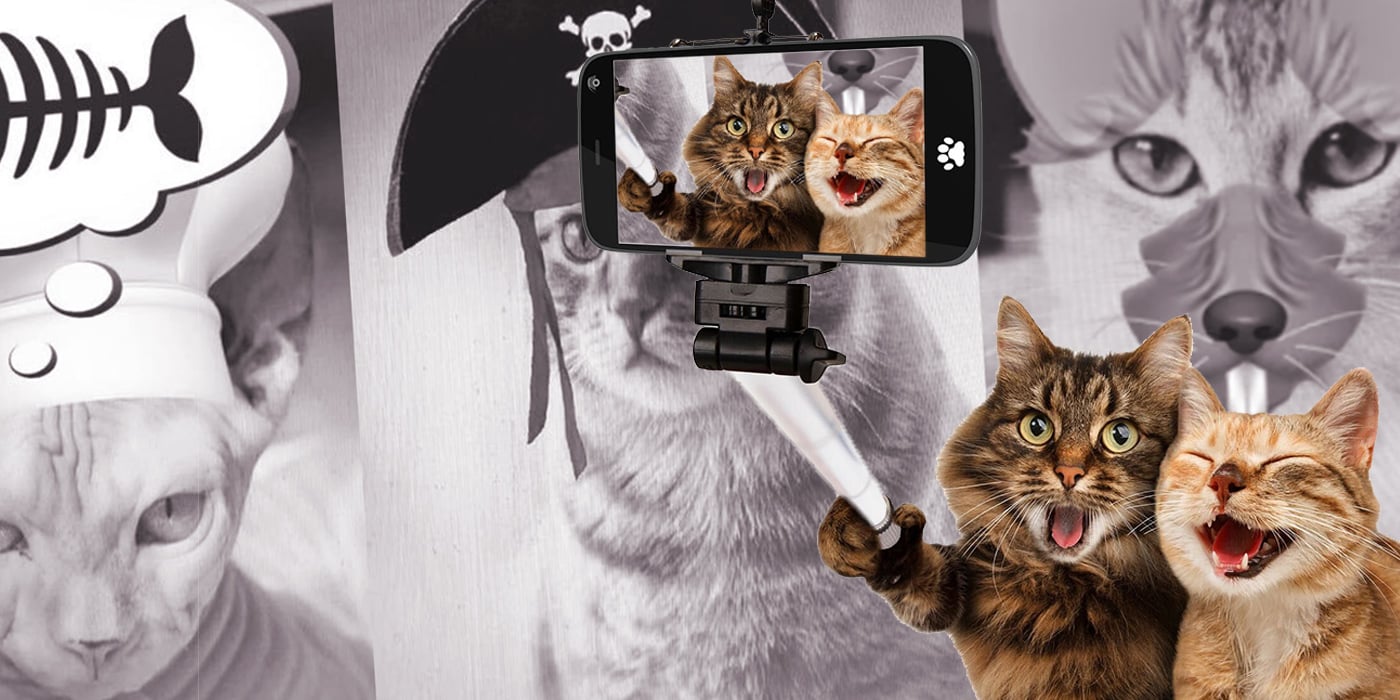 Thought Snapchat was dead? Think again. Admittedly, the ten-year-old app has had a bit of a topsy-turvy relationship with the general public. In the beginning, it was a revolution. You send a photo, and then it vanishes forever? Snapchat’s simple USP caught on across the world and for a couple of years, it reigned supreme.

Then everyone stopped using it. It fell out of fashion. Instagram introduced its Stories feature and that was that. Yet around 2017/18, the app experienced a renaissance with the dawn of Gen Z, who took advantage of it as a more low-key platform away from the likes of Instagram and Twitter. Today, Snapchat gets around 293 million daily users with 4 billion snaps shared in a given 24 hours.

Animal filters are so popular that it was only a matter of time until Snapchat made filters for pets themselves. Now your dog or cat can see what they’d look like in, for example, a pair of pink sparkling glasses.

It doesn’t really matter that they don’t have any concept of what is happening, what glasses are called or do, how it is they’re seeing themselves in a small rectangle. It’s whimsical. On this one, we’re going to prioritise cats. So grab your furry friend and get ready to irritate them that little bit more with these feline-focused Snapchat filters.

Why don’t Snapchat filters work on my cat?

How many hours and days did we waste trying to slap funny filters on our cats? How many years? Too many. That’s the answer. Ever since the app debuted its filters in 2015, users have chased their pets through the house hoping to turn them into little more than a meme. But now that’s all history.

In October 2018, Snapchat revealed users could now use filters on cats. Previously its facial-recognition technology had only worked on humans and some dogs. The announcement came weeks after the company reported a drop in the number of daily users.

Do Snapchat filters work on other pets? 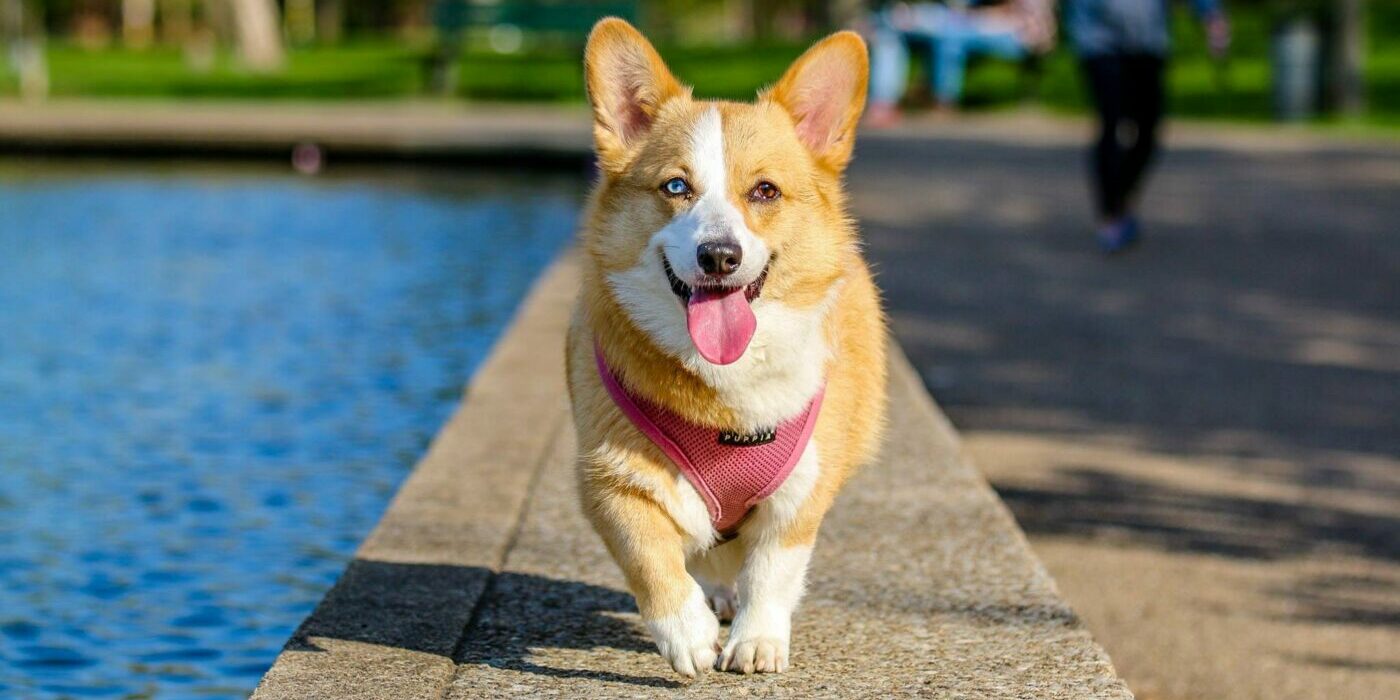 Okay if you’re the type of person who believes there’s a Big Tech conspiracy preventing the representation of cats on social media apps, you might not like the following information.

Yes, Snapchat filters do work on other pets: namely, dogs! While filters only previously worked on certain breeds, it was in December 2018 that a bigger selection became available to all dogs, large and small.

Alright, so how about those cat filters anyway? We’re not here to talk about dogs.

Maybe another time. Here’s our pick of the best filters for you and your cat: 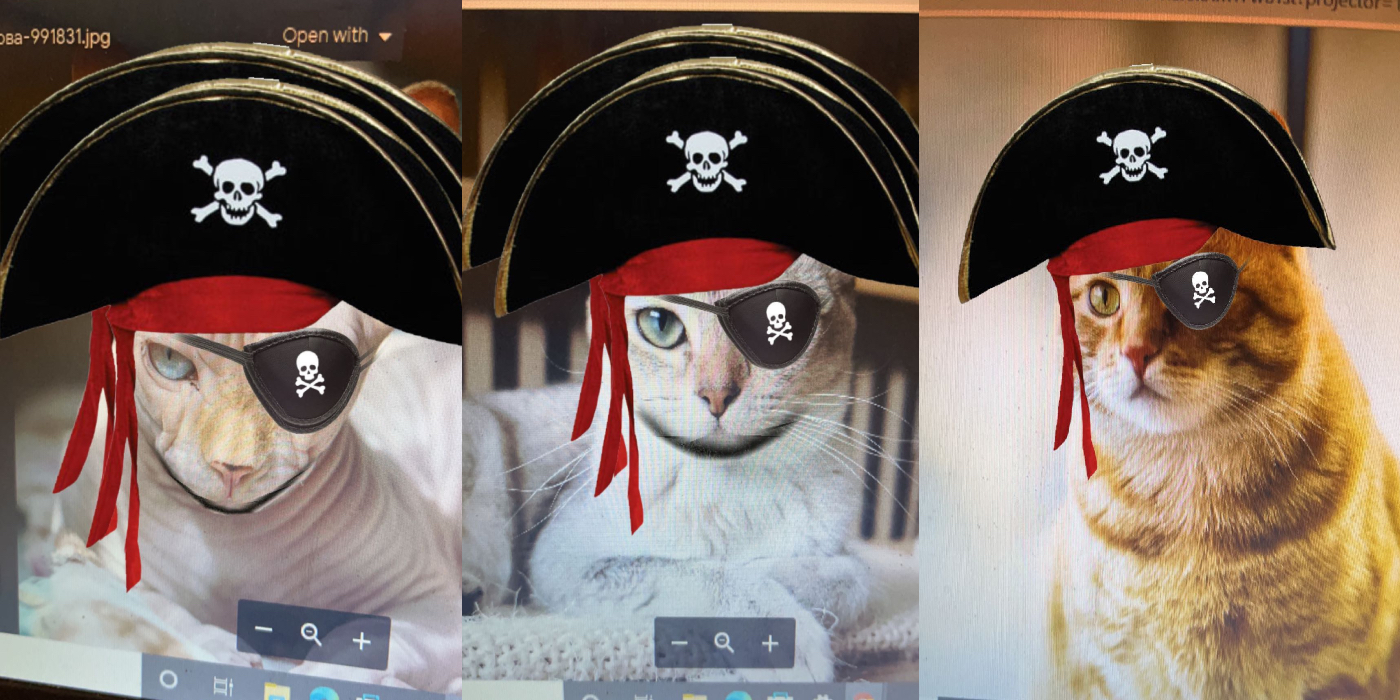 Shiver me whiskers! Fancy dressing your pet up in a costume? Try out this filter. It’ll turn your furry mate into a pirate. The filter comes with not just an eyepatch but a captain’s hat, too. Did you know cats were popular on board pirate ships thanks not only for their ability to hunt and kill rodents but because they made great companions for the crew, who would suffer loneliness as they travelled the seas for loot? Cats have a knack for adjusting to new, unknown environments, which made them ideal for these types of journeys.

Don’t worry about getting jealous of your cat here, by the way. The filter works on humans too. So you can your pet can be pirates together, sailing the proverbial sea, looking for treasure in the form of cat food. Strike a pose, make sure you’re both in the shot and create a snap for the ages. 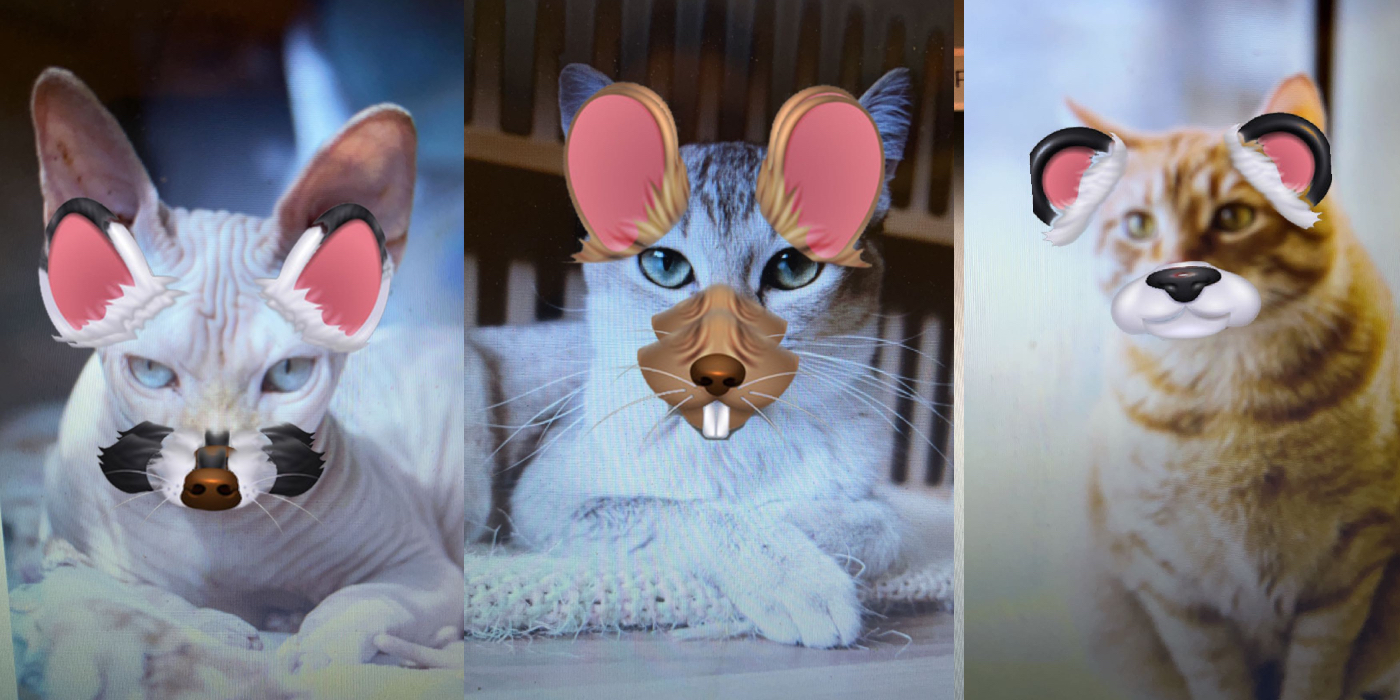 Here’s a good one for your furry mate. This filter can transform into a host of animals. While the differences may be lost on the cat, it’ll be fun to see their reactions all the same. Once unlocked, a selection of icons will appear on the screen, each one representing a different breed. Click on the one that tickles your fancy and watch the features appear on both your faces.

Just like the pirate filter, this one works for you and your pet so plenty of fun for all the family. Give your cat some panda ears. Give them some bunny ears. They’re all there to play around with. The results will speak for themselves 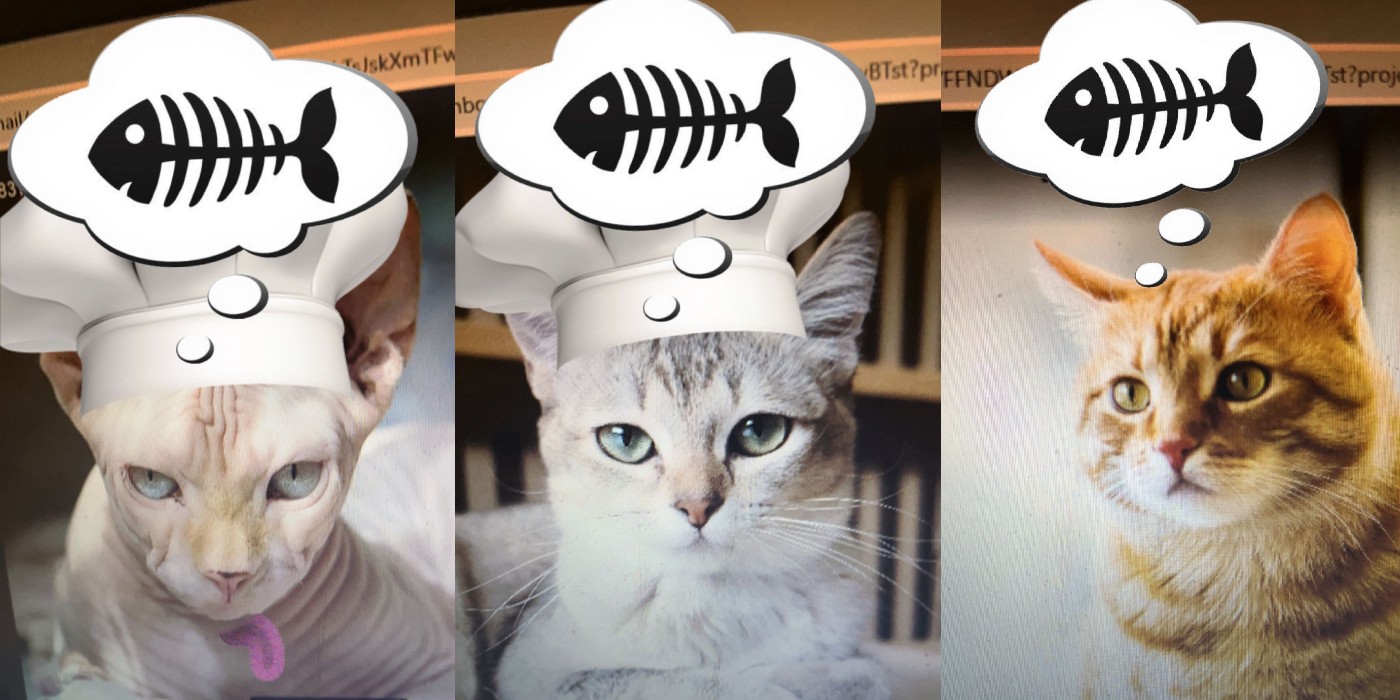 This filter has the potential to truly tap into your cat’s interests. Why? Because cats love food. More importantly, they love fish. Whoever created this lens is a cruel genius. While they may be nonplussed about the appearance of animated ears, the image of a fish is sure to rub them up the right way.

Once unlocked, a white chef’s hat will be plonked on top of your head. That’s your role in this thing. You’re at the helm of the kitchen. You call the shots. You decide what Mr Paws is having for dinner. Meanwhile a thought bubble hovers over your pet’s head. And what’s inside it? A fish of course. Now the fish itself is in skeletal form but that’s hardly an image that’ll stump your cat. They’ve been around the block a few times. They know the score. 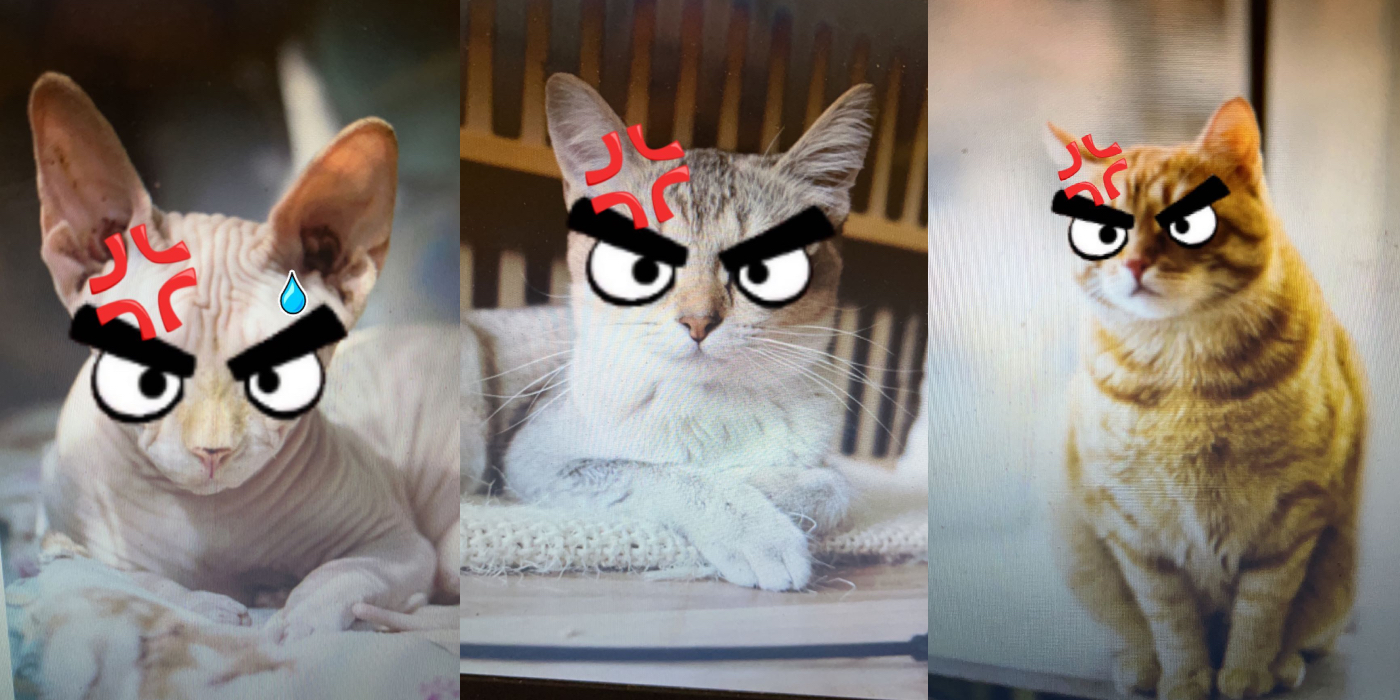 Tardar Sauce (2012–2019) better known as Grumpy Cat, was meme royalty. This disgruntled kitty became one of the internet’s first ever celebrities when pictures of her cranky expression, caused by an underbite and feline dwarfism, became viral. By the time she sadly left us, Grumpy Cat had 8.3 million total likes on Facebook, 2.6 million followers on Instagram, 1.5 million followers on Twitter and 283,000 subscribers on YouTube.

It’s no surprise then, that there exists a filter to mimic her famous face. This one is a guaranteed winner. Not only does this work on cats but dogs and humans alike. Once you’ve unlocked the filter, cram as many cats and dogs and humans into a selfie as you can and wait for the magic to happen. While your cat is more likely to get the angry eyes, dogs will settle for goofy Simpsons-esque eyes. All in all, a five-star filter. 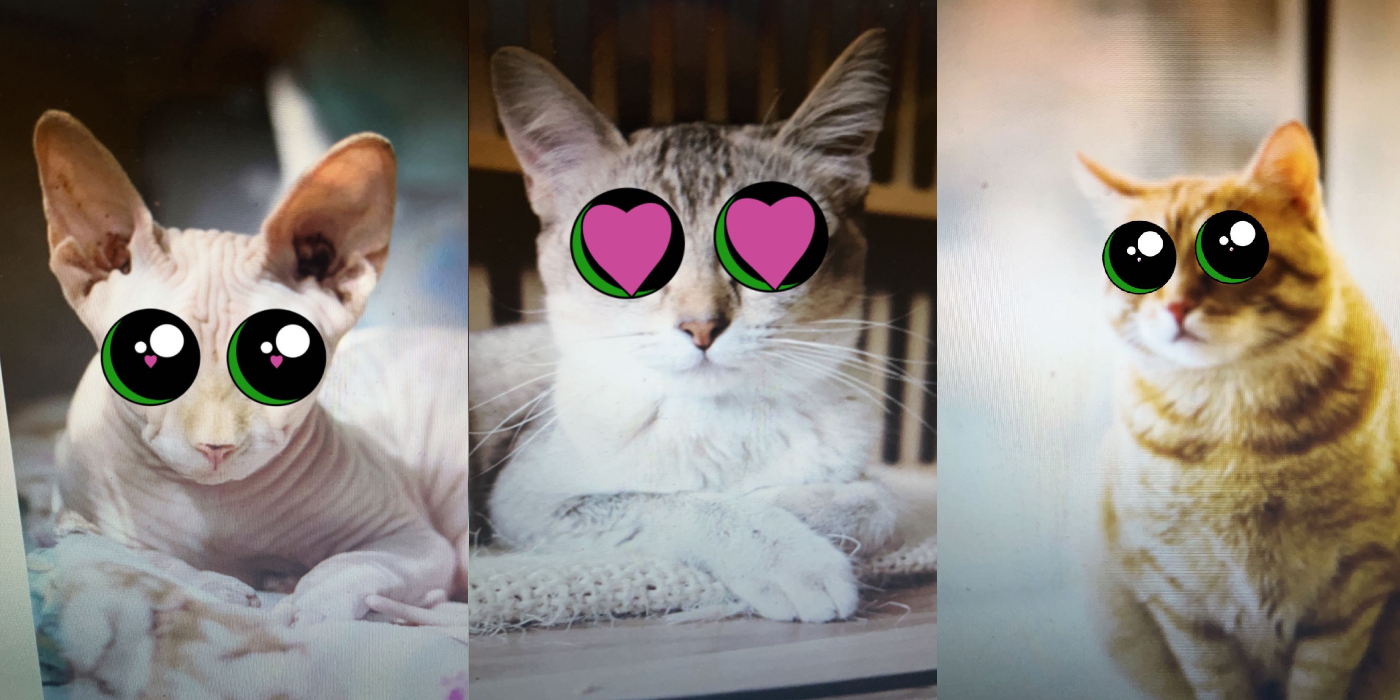 Another major player on the internet is Japan’s ‘culture of cuteness’ otherwise known as Kawaii. Unsure? If you’ve ever seen or read any anime or manga, you’re probably more familiar with the concept than you’d think. Kawaii is a style incorporating bright, pastel colours and childlike imagery. As scholar Joshua Paul Dale writes, “[kawaii] communicates the unabashed joy found in the undemanding presence of innocent, harmless, adorable things.” Think Pikachu and Hello Kitty.

Yeah, now you get it. So: how about a kawaii filter for you and your cat? One that gives you big round anime eyes? Unlock this filter and turn you and your cat into a Japanese cartoon. Every and now and then, a pair of pink love hearts will appear over their eyes, which is definitely how our cats feel about us all the time. 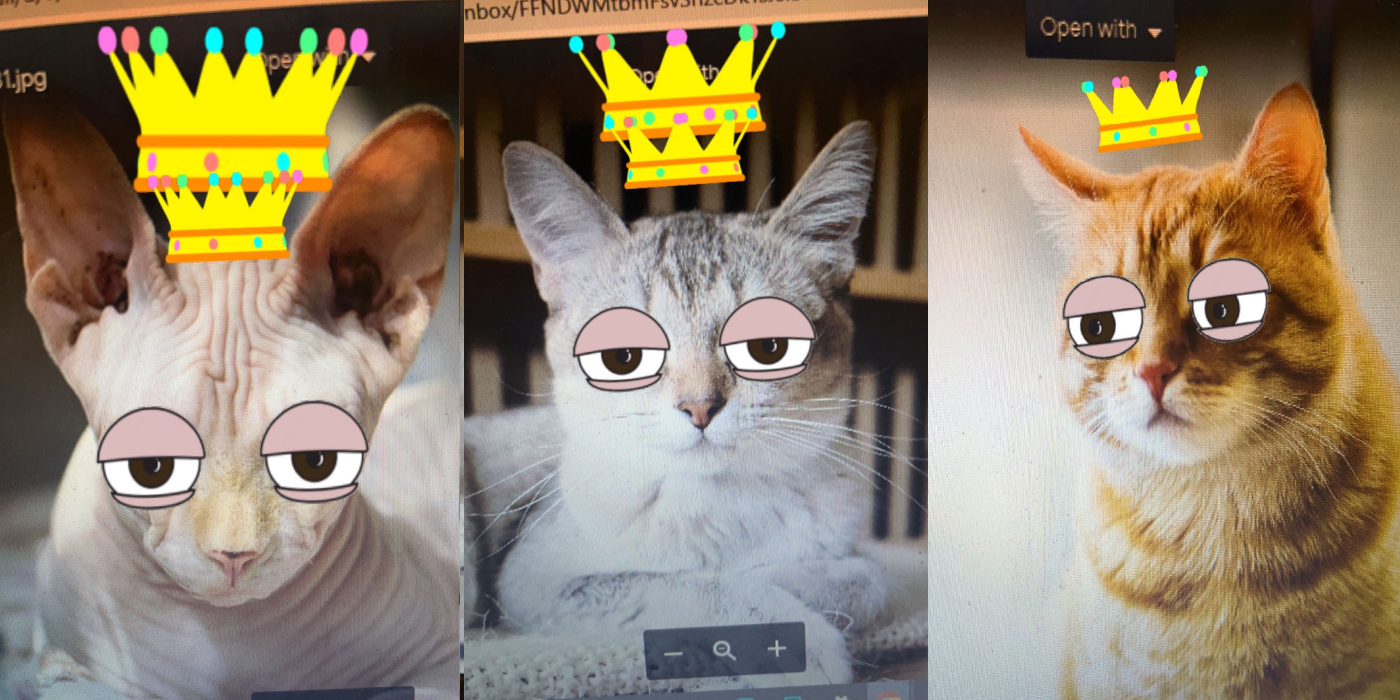 Chances are your cat saunters around the house expecting everything to be done for them. For you to accommodate their every move. Chances are, you don’t mind. Otherwise you wouldn’t have bought a cat. You like the fact they’re not as soppy and reliant as dogs. You embrace their independence, their royal status. So why not slap a crown on them? Check out this filter to help realise your pet’s true destiny. 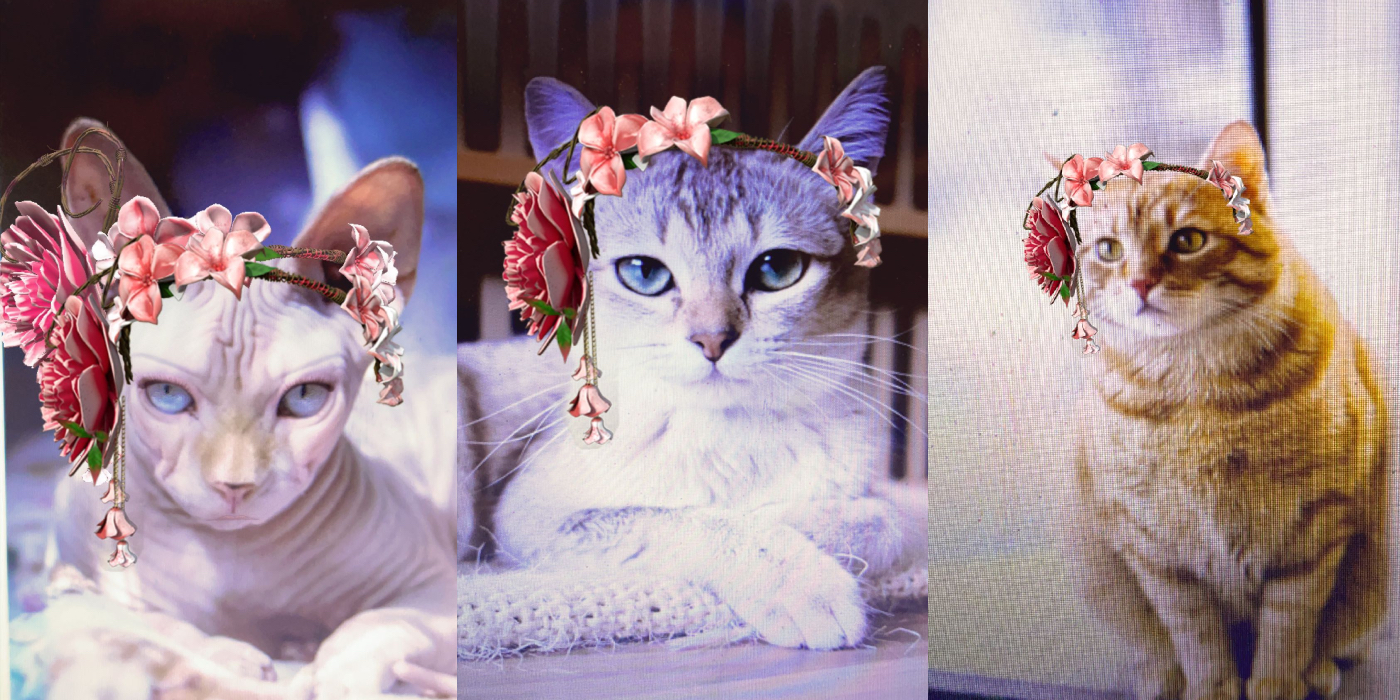 Cats have seen some stuff man. They’ve been around town as long as we have. From day dot, they were an addition to human society in a way other animals just weren’t. Cats saw Ancient Egypt in its pomp, they saw the Renaissance, they saw Woodstock 1969. It makes purrfect sense then that there should be a hippie-inspired filter.

Unlock this one and see your cat as a child of the counterculture 1960s, with flowers on its head and general trippy vibes. Crank some Grateful Dead for this selfie and, you know, let your cat go with the flow. Let them forget all their current troubles and bask in the joy of a simpler time. 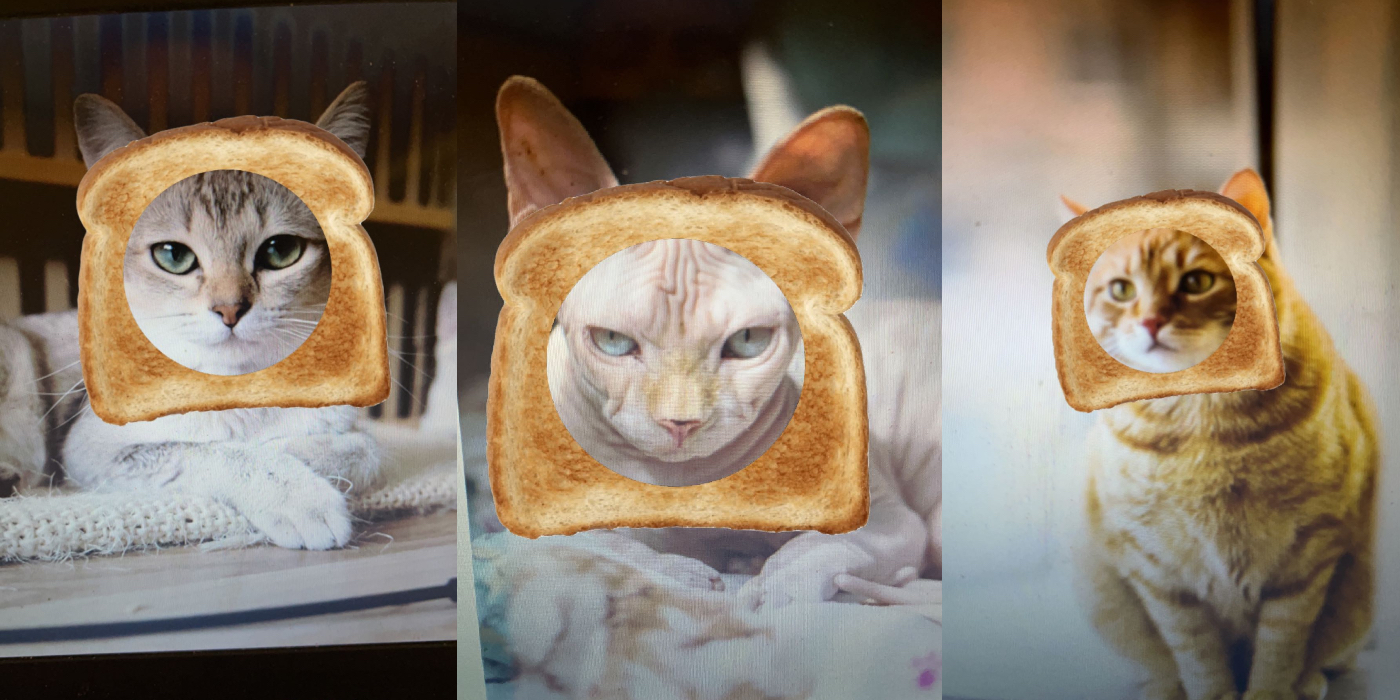 Alright, we’ve saved the most inane one for last. Not much to say here really. It’s your cat’s face surrounded by bread. As stated before, this is all whimsical. These filters shouldn’t need to explain themselves. By doing so it defeats the purpose. The purpose of FUN!

While we’ve got you, did you know that cats and bread aren’t actually healthy bedfellows? While it isn’t necessarily harmful, it doesn’t offer any nutritional benefit. High in calories, low in protein, it really doesn’t offer your cat anything other than empty calories. What you should avoid, however, is raw bread dough. A cat’s stomach has the perfect conditions for dough to expand, leading to bloating that can be life-threatening. The yeast used to ferment the carbohydrates in bread dough also produces carbon dioxide and ethanol alcohol and no cat wants that. So bear in mind when you’re using this filter on your beloved friend that it could be triggering. Enjoy!