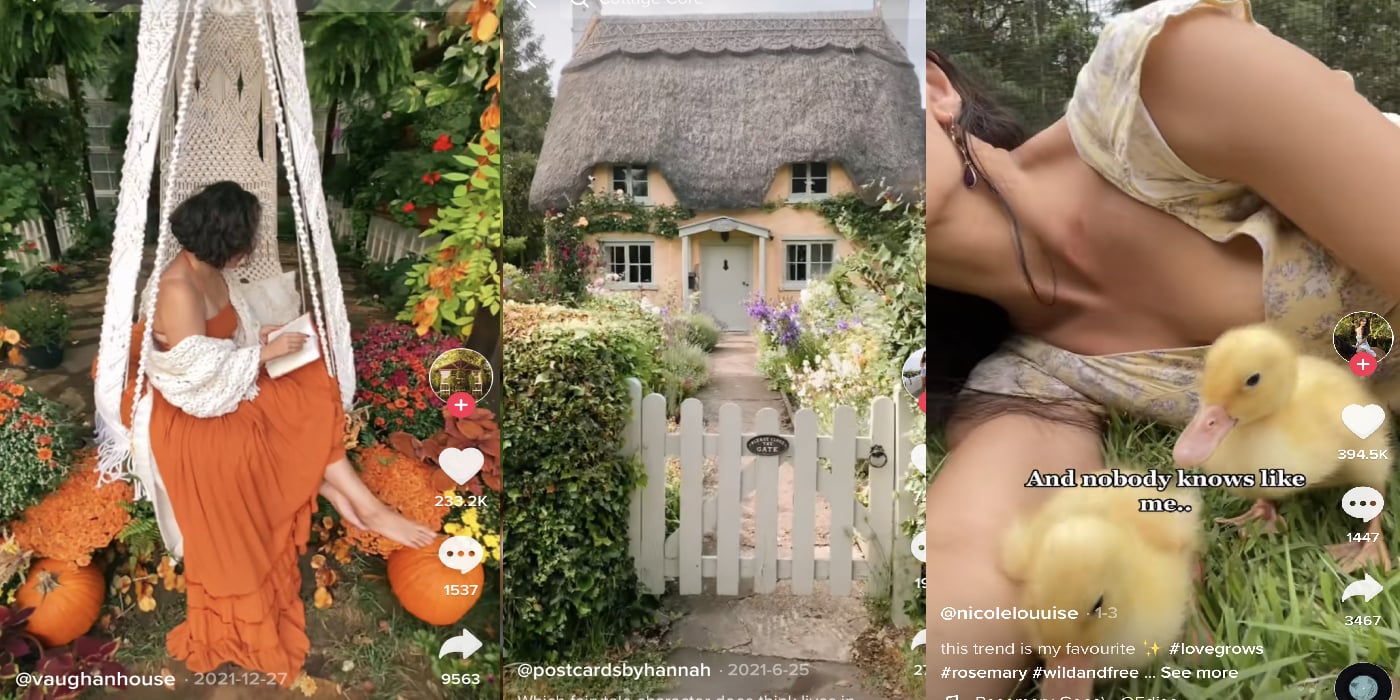 Though ‘Cottagecore’ might sound like a phrase you’d see in a top-shelf magazine, it’s actually a wholesome (often cloyingly so) culture made up of like-minded millennials and zoomers longing for escape to a sunny world where everything is green and smells good; where climate change doesn’t exist and animals don’t bite.

Coming of age in the 2010s, Cottagecore strikes a familiar chord that goes back centuries. From Countryfile to Constable, the wilderness is built into all of our DNA. “Cottagecore” searches increased by a massive 5950% from 1000 searches in January 2020 to 60,500 at its peak. Searches for Cottagecore interiors and clothing grew steadily throughout 2020.

All of this weighing you down a bit? Still not convinced? We’re going to debrief the motives behind the movement, what the lingo is and how to distinguish it, where the trend began and how to dress accordingly should you be inclined to get involved. So sit back and familiarise yourself with this eccentric community. The rewards may change your life for the better. 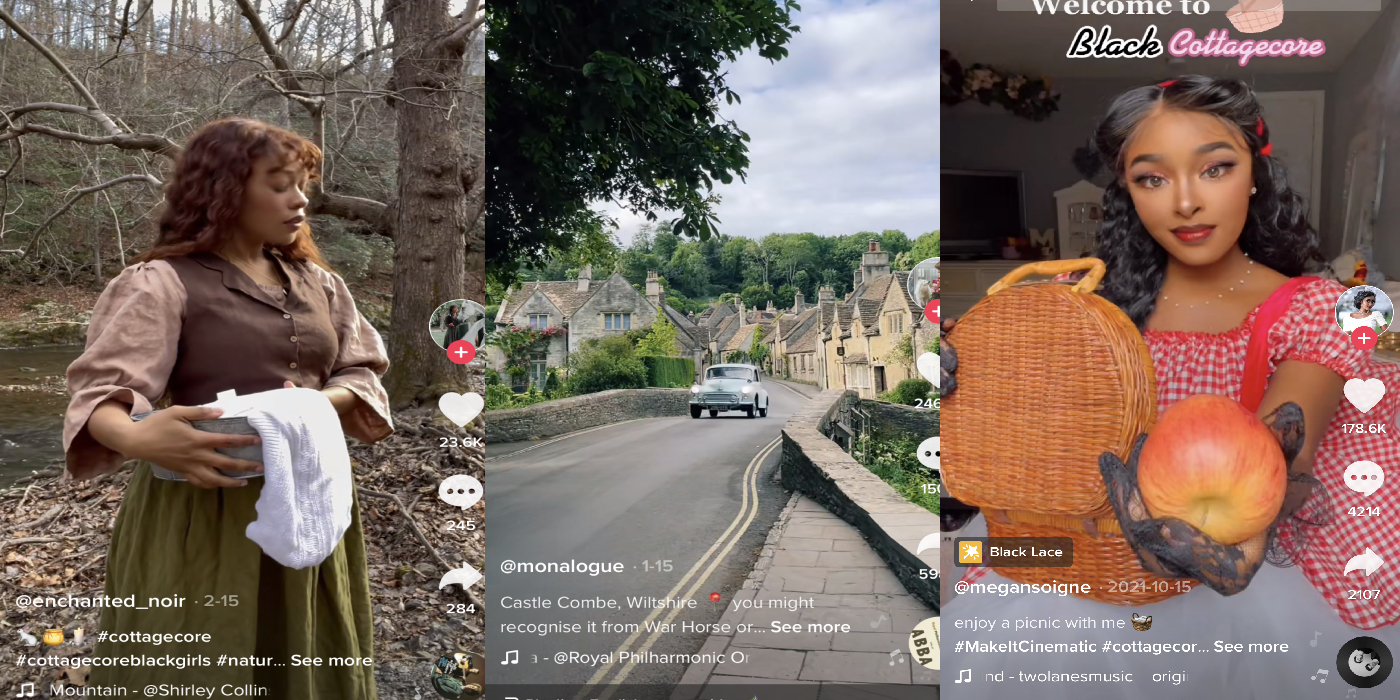 Have you ever found yourself in the sticks? And we mean in the sticks, not the southside of an urban area. Have you ever been captivated by the spirit of it? The chirping of crickets? The smell of rainy soil? The sounds of water trickling down moss-covered rocks? Chances are you’re the target audience of Cottagecore.

Cottagecore is a fashion aesthetic not unlike punk or disco, idealising all things rural such as clothing, interior design, baking, pottery – in general, being away from a congested, manmade city. Cottagecore has close ties with fellow aesthetics Farmcore, Grandmacore and the antonymous Goblincore.

It’s a largely female community made up of women skipping through meadows in big frilly dresses, pausing only to forage the fruits of the earth, which they will later make into a cake and serve to a table of bespectacled teddy bears. Okay, it’s not quite that over-the-top, but it can sometimes feel that way. The content within this world is highly cherry-picked  – often literally. But you know what, who cares? Life is messy and disordered. It has bad breath and bad manners. If people want to pretend they’re Miss Honey from Matilda, so be it. It’s better than wanting to be an ax murderer, isn’t it?

We could croak on all day about the specifics of the community and what it means to individual people and individual minorities given how the diversity. Or we could just leave with the subreddit description which gets to the point in five words: “Your grandma but, like, hip.”

How did the Cottagecore trend begin? 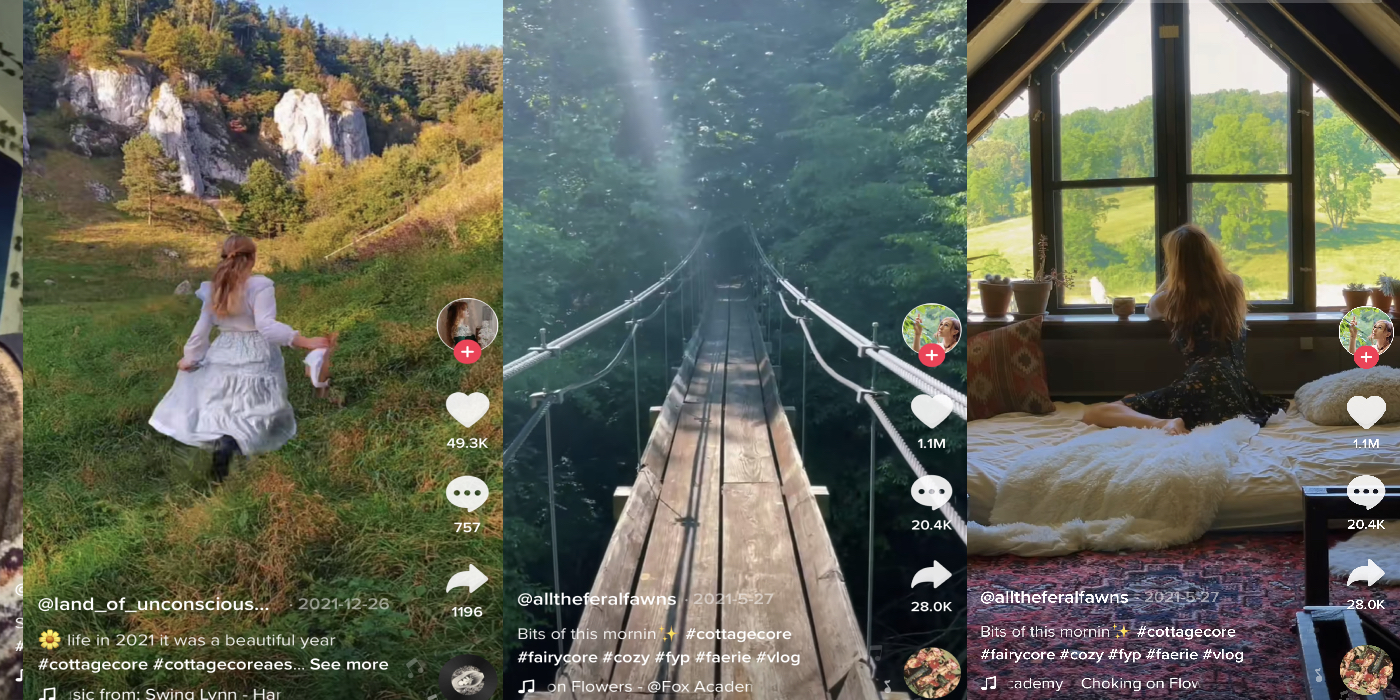 The fetishisation of the countryside is nothing new. Even prior to the internet, the hassle-free provinces had long pricked the ears of city slickers, if not suburban slickers too. Magazines like Country Living capitalised on this fixation in 1978, while shows such as Countryfile have kept the masses entertained since 1988. You could even argue the paintings of John Constable were a precursor to the culture. These types of productions may not be half as cute as Cottagecore, but they play in the same ballpark.

Naturally, this image-dominated obsession frolicked effortlessly into the image-dominated social media age. Tumblr ran with the aesthetic for years before branding it Cottagecore in 2018. Now TikTok has taken it a step further by combining the culture with influencerdom. So you’ve gone from 2012-era “I’d love to live here! :(” posting to 2022-era “What if I pretended to live here?” posturing.

What if I didn’t just fantasise and actually curated an entire online persona around countryside living? Soon, accounts were producing exclusive Cottagecore content, establishing what is and isn’t canon. More on that later.

Today, a wider net of social media users are more influenced by Cottagecore than they might think or want to admit. Taking a picture of a rustic pub interior? Probably Cottagecore. Listening to Taylor Swift’s Folklore? Cottagecore. Window-shopping ‘the Cotswolds’ on Zoopla? Hopelessly Cottagecore. The TikTok hashtag has a whopping 9.4 billion views. A number that is only growing like the green grass of its content.

How do you dress Cottagecore? 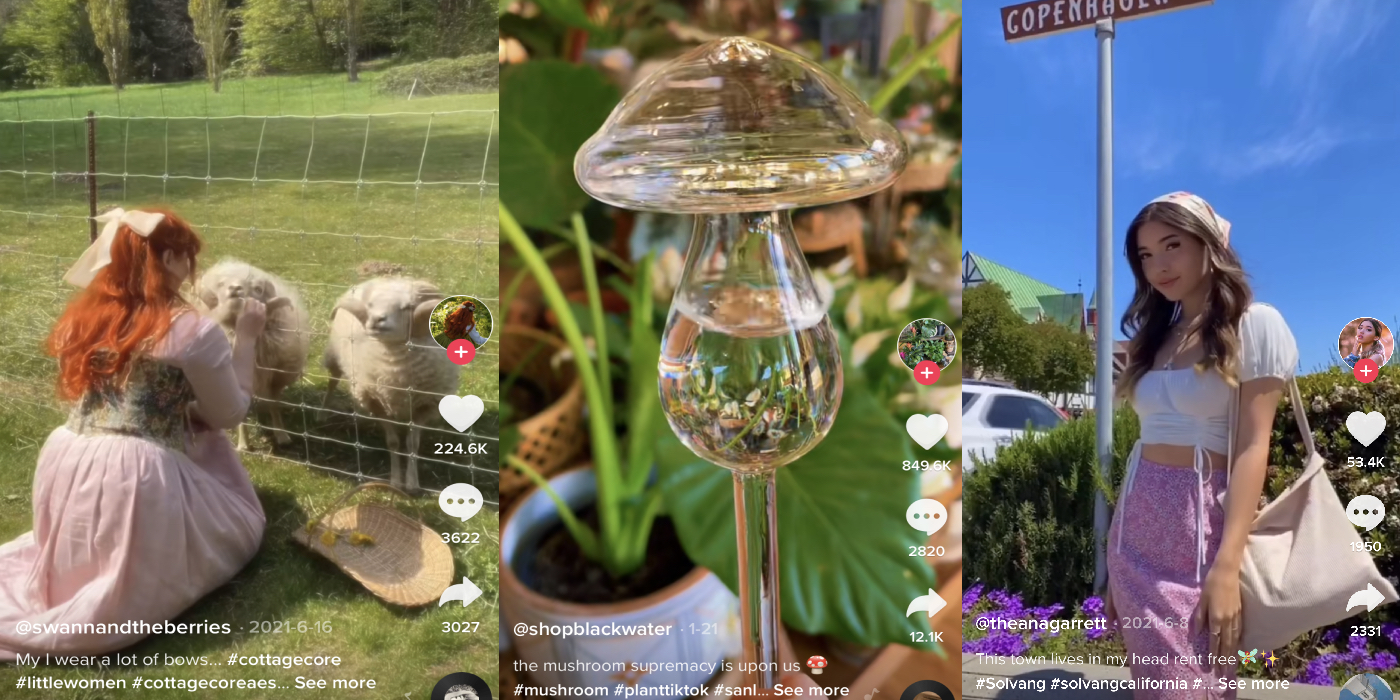 Maxi Dresses: Get yourself a maxi dress. Why? Cottagecore flourishes in the summer and a long flowing dress is the ultimate look. Don’t worry about finding the perfect one. As is the case with this trend, the older the better. Even if it’s slightly tattered, authenticity goes a long way here. Try local vintage shops, Depop or Etsy.

Linen Aprons: these may seem very old school, if not a bit matronly. In reality, a classic apron is an incredibly functional item to have in your wardrobe. Worried about staining your vintage maxi dress with food? Stick on an apron. Want to slide down a damp bank on your belly? Apron. As it happens, they’re also very Cottagecore. Very “the Shire”.

Pinafore Dresses: another dress? Yes. Unlike the maxi dress, pinafores are a more contemporary-looking clothing item for those creators out there who want to delve into the culture but maintain an aspect of modernity. Pinafores are versatile. They go well over white peasant blouses as well as T-shirts and cardigans, meaning they’re also weather-appropriate. Pinafores were traditionally worn by peasant women who worked on farms (AKA nature AKA CottagecoreLand). Go wild.

Knits: a lot of Cottagecore TikTokers go into hibernation during the ugly, winter months. A lot don’t. A lot thrive on the blistering conditions by showing off their knitted goods to keep them cozy and warm. Now don’t feel pressurised to learn knitting. If it’s easier, browse the internet or local vintage shops for pre-made snug items. Take a look here at Emmy Design Sweden’s efforts for some inspiration. 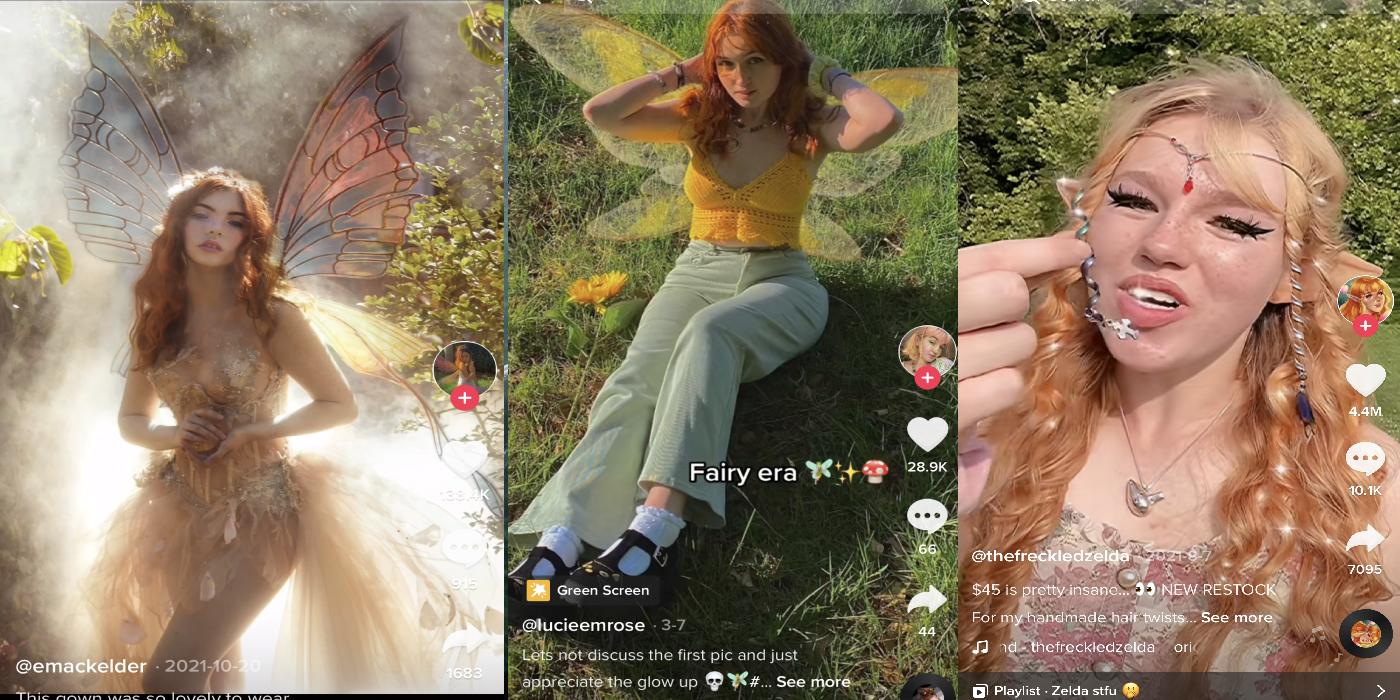 Fairycore is linked to Cottagecore insomuch as the settings are similar, but they are separated by mysticism. Cottagecore creators are idealised versions of themselves, but still human. Fairycore creators are fairies. The origin of its suffix is unclear but the movement itself is rooted in Tumblr, just as Cottagecore was before it.

“Fairycore actually has a lot of similarities to other popular aesthetics like cottagecore, goblincore or dragoncore,” MyCottageCore writes. “They all share a love for animals, forest creatures, gardens, and rustic or shiny objects. This is why some people find it so hard to identify with a specific aesthetic. Compared to a lot of the others, the fairycore colour palette is rather bright and can have nearly any color although pastel tones are most commonly used. Colors like pale green, pastel blue/pink/yellow, or cream white are super fitting. But also earthy tones (that are still happy and bright) can make for a great look.”

For Fairycore, the outdoors are key, such as going for long walks, gardening, and mushroom picking. Connecting and accommodating nature is a big deal, including wood-carved birdhouses. Fairycore also prizes animals like rabbits for aesthetic purposes.

As for the indoors, handicrafts such as sewing, knitting, or embroidery are popular as well as reading and drawing. Decorating your bedroom or entire house “can be a fun project to challenge your creativity.”

What’s the difference between Cottagecore and Goblincore? 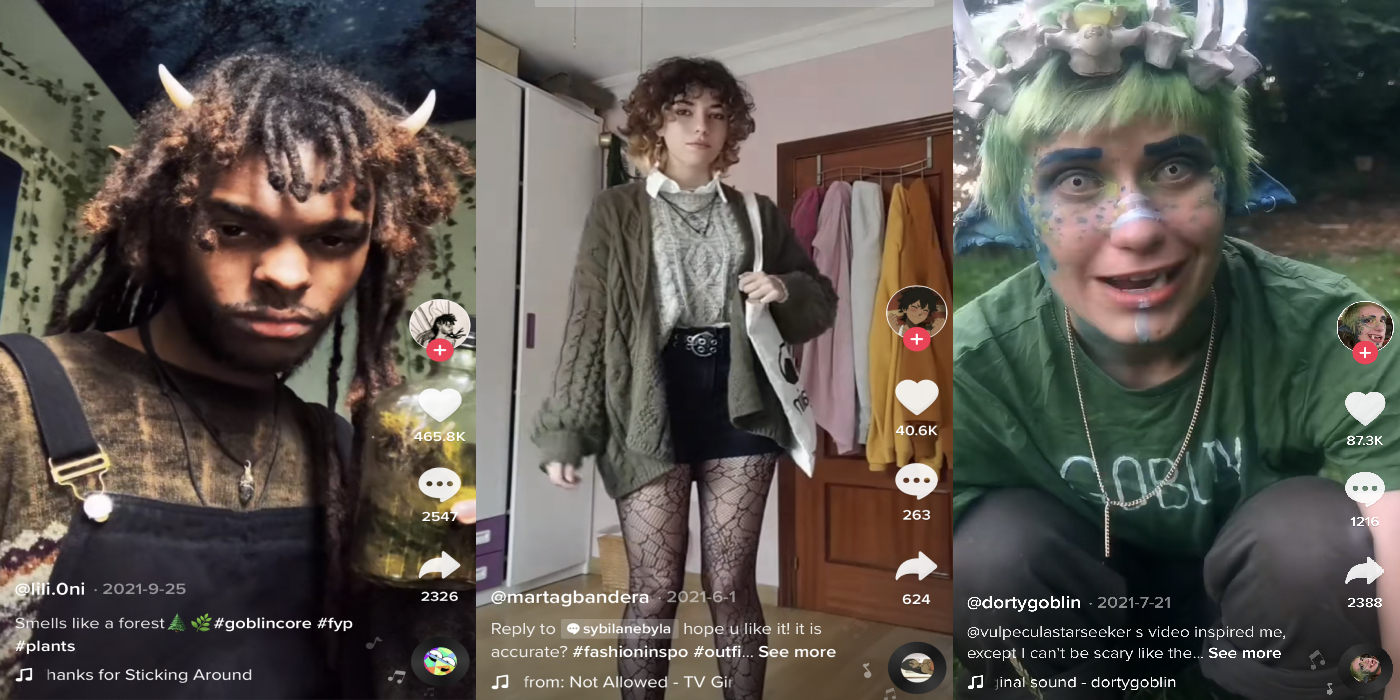 With any trend in society, you’re going to attract haters: people who think “Nuts to that, how about this instead?” Enter Goblincore, Cottagecore’s arch-nemesis. The community that keeps the maxi-dressed-maidens of the countryside awake at night.

Goblincore, similar to Dragoncore, is an aesthetic movement that celebrates the often dark reality of country living, such as floods, insects, and gloomy plants. It is an affront to the romanticised agricultural ideal found in Cottagecore. It was founded in direct opposition at the end of the 2010s and has gained incredible popularity through Tumblr and TikTok, with a hashtag view count of 918 million.

The culture is extremely popular in the LGBT community, mainly among transgender and non-binary people. Followers will often hoard little shiny items called shinies (not the Pokemon kind). And, instead of florals and pastels, the palette typically includes dark brown, dark green, dark lime and navy blue.