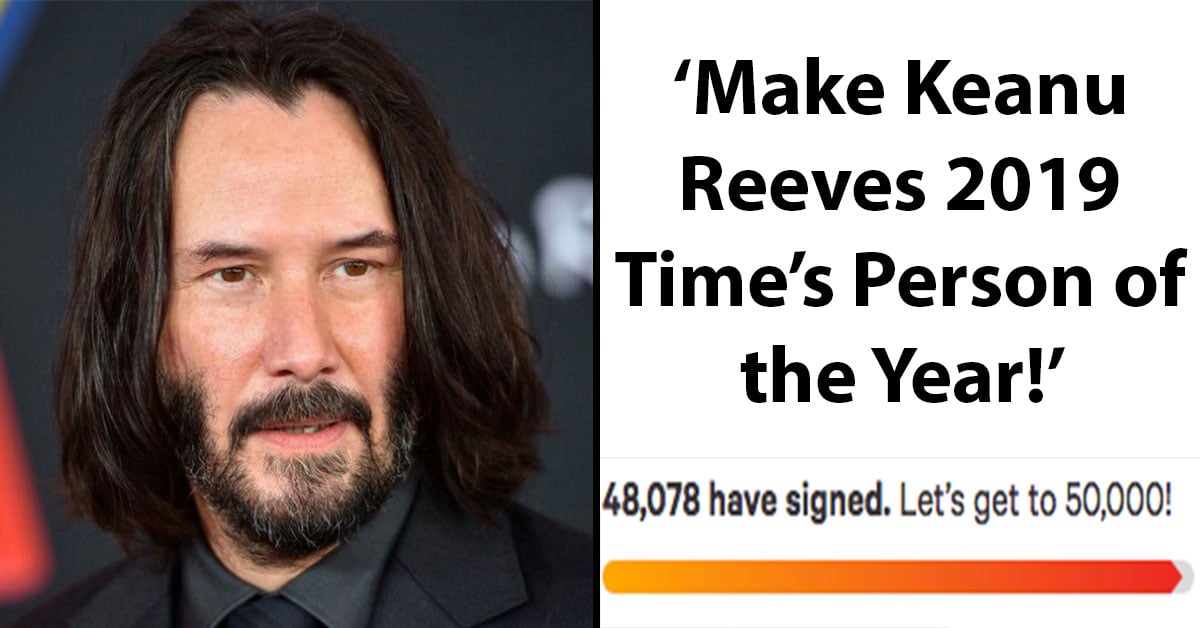 The internet’s undying love for Keanu Reeves has reached new heights as a fan petition to make Keanu Reeves Time Magazine’s ‘2019 Person Of The Year’ – and it currently has over 48, 000 signatures! Change.org is a website where people can suggest changes that need to be happening from something as daft as a petition to change the names of ‘Fire Ants’ to ‘Spicy Boys’, to more serious petitions which attempt to drum up support for political changes to be made.

The newest petition to take the internet by storm, however, is a petition to make Time Magazine name Keanu Reeves as ‘Person Of The Year’ – and this is no laughing matter for the internet! It’s no secret that over the last year that patrons of the internet as a whole have taken Keanu Reeves unanimously into their hearts due to his down to Earth nature, generous charitable giving, and generally wonderful personality.

His appeal across the internet has grown so large that he was even dubbed ‘The Internet’s Boyfriend’, and when asked about it in an interview ahead of Toy Story 4, he seemed somewhat taken aback by the love. The petition to make Reeves ‘Person Of The Year’ was started by a man who goes by the name Jackson Beem around 2 weeks ago.

Beem gives the reason for starting the petition as such:

‘Keanu is the most wholesome person alive, make him the person of the year! Keanu has secretly donated millions of his earnings to children’s hospitals and other charities, and has done amazing things for people in public while ask for nothing in return.’

Now that is one heck of an increase!

Even though these petitions very rarely actually bring about change, this is a real testament to how seriously protective the internet is over its spiritual boyfriend! There are several amazing changes that have successfully been brought about from Change.org petitions.

Lucy Gavaghan (pictured below), for instance, helped to change supermarket giant Tesco’s policy on using caged hens for their eggs after garnering over 270, 000 signatures for her cause!

Okay, so making Keanu Reeves Time Magazine’s Person of the Year may not be as important as that, but it goes to prove that every now and then the unlikely can happen. Change.org also allows for people who have signed the petition to leave a comment either as to why they signed or to just generally show their support for the cause.

As you can probably imagine, the comments have been coming in thick and fast for the Reeves Person of the Year petition, with some of the most emphatic being the likes of:

‘Keanu Reeves’ full heart is shown in all of his work and day to day life as he spreads joy, happiness and dedication to the world and the people around him.’ – Matthew Lye

‘Keanu Reeves is a stellar example of generosity. He donates much of his money to helping others and brings entertainment to people while behaving in a manner all people should aspire to.’ – Julie Walland

‘Even he would be too humble to want something like this, but he definitely deserves it.’ – Greg Morris Others, however, were more straightforward in their reasoning, such as Christopher Green, who simply gave his reason for signing as, ‘Because.’

If you want to sign the petition, you can do so here: Change.org

It never ceases to amaze me how much this man is so unanimously loved. It is good to see the internet celebrating a man’s positive contribution to society though, as opposed to obsessing over Instagram influencers who do nothing to help other people!

Will you be signing the Keanu Reeves petition? Let me know what you think of this in the comments below, and be sure to tag Keanu Reeves fans who you think would enjoy this story!