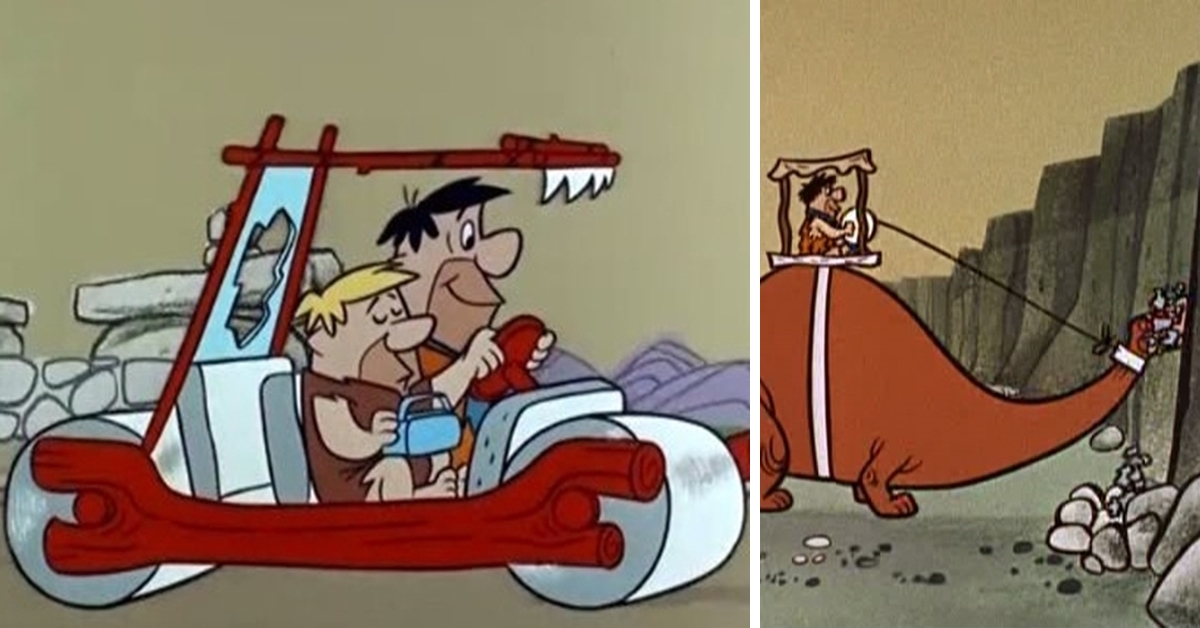 Despite being first broadcast in the 1960’s, The Flintstones was a definite favourite of us Children of the 1980’s. The facts back this up, as it was the most financially successful animated TV show for 3 decades (until The Simpsons started). And indeed, in 2013, TV Guide ranked The Flintstones as the second greatest TV animation of all time (after The Simpsons). Our favorite part of The Flintstones was all the fantastic prehistoric contraptions that the people living in the stone age town of Bedrock used. I don’t know if you remember a particular episode where the Flintstones and the Rubbles visit a ‘Wacky Inventions’ exhibit? There they meet Professor Einstone (get it?), who has been working on a series of inventions that he hopes will revolutionise prehistoric life. Fred and Barney spoil Professor Einstone’s day by showing him a video of life as it currently is in Bedrock, where all of his inventions have already been created by someone else. Below, for your prehistoric pleasure, are the 10 greatest contraptions that they show him…

Fred’s car is probably the best known of the stone age contraptions, and as you probably know Fred uses his feet to move the two smoothed out boulders that are held together by tree trunks. The Dino Crane is what Fred uses at work and features in the show’s opening credits. The dinosaur acts as a modern day JCB by lifting rocks between its jaws. The Bedrock Express is a train service with carriages made of rocks that are pulled along by a Dinosaur.

This stone age film projector is powered by a bird that runs on a cog to spin reels that are made of rock and held together by branches.

The warthog garbage grinder simply involves rubbish being thrown down a garbage chute and eaten by a warthog!

This doesn’t need much of an explanation, it’s simply that Betty and Wilma having running water at home thanks to an elephant and his trunk. The Octopus dishwasher helpfully washes and dries 8 dishes at a time using its tentacles.

Another Elephant (a small one this time) comes in useful again by perching on a trolley and hoovering the carpet with its trunk. You could probably have worked this out by yourself. A lobster on a trolley and attached to a pole clips the grass with its pincers as it is pushed along. Our friend the Elephant again comes in useful, this time perched on an ice box enabling it to squirt ice water out of its trunk.