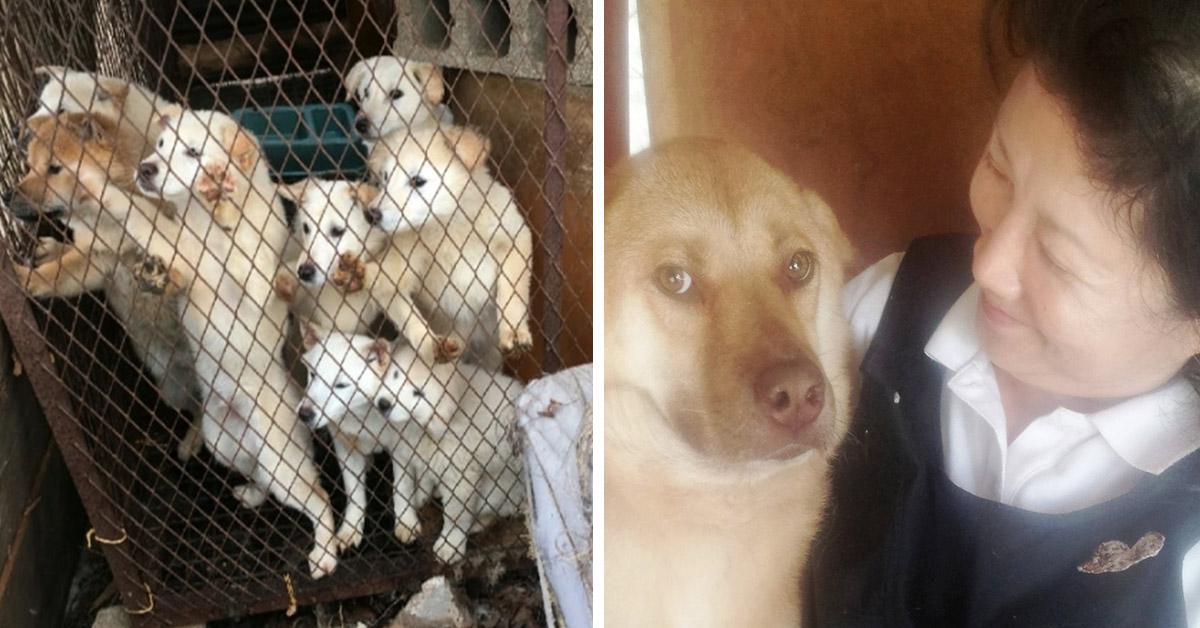 If you’re anything like me you’ll absolutely worship the ground your pooch stands upon. Dogs are the joyous gift that humans will never deserve but will always love. That’s probably why it’s so shocking for those of us who love our dogs to imagine cultures where our four-legged friends are just another food product. Whilst it’s shocking to you and I, in Korea alone there are over 17’000 dog meat farms.

Fortunately, Nami Kim, a retired teacher and activist from South Korea, felt similarly appalled by the notion of dogs being used for meat. Kim, in a truly inspiring way, decided to stand up and do something about the awful practice of dog meat farms. Kim dedicates herself to saving dogs from meat farms and also shutting down farms altogether. So how do we nominate this lady for a nobel prize, please??

Perhaps her most publicized good deed (though there are hundreds!) was when Kim saved several puppies from a terrible meat farm fate and contacted The Animal Humane Society in Minnesota to help her re-home the rescued dogs.

Of course, the staff at The Animal Humane Society were only too happy to help these pooches find a new home in America. Brie Nodgaard from The Animal Humane Society explained just what a feat of organization the operation was;

“We had never done an international transport before, so it took months of planning to make this all happen. Nami Kim needed a place to rehome these rescued dogs, and we were able to do that!”

Though it wasn’t easy to transport the pups from South Korea to the States, what with the requirement they have medical clearance and an aircraft willing to transport them. Thankfully, that’s where Pilots N Paws stepped in and flew the dogs to their new home. But the wonderful, charitable actions of humanity don’t stop there!

Oh no! Our four-legged friends were flown to Chicago as it was the most convenient airport available, so in order to get the dogs from Chicago to Minnesota a group of volunteers pitched in to drive them all there! Once the puppies arrived safely The Humane Animal Society put them up for adoption and, of course, the general public couldn’t wait to give these little guys the homes they deserved, and had traveled such a long way to find!

Nodgaard described the overwhelming interest from the public to re-home the puppies and give them the best life imaginable;

“Doors opened at 10 a.m. One woman waited in line by 6:30 a.m. to make sure she could give one of these rescued puppies the best life that she could. By 11 a.m. every single puppy was spoken for.” Nodgaard praised Nami Kim for her heroic actions that ensured the puppies found safety and happiness. He said;

“Just knowing their story and what their life was destined for is now forever changed. Nami Kim is truly a remarkable woman and is my hero! Words can’t express how overjoyed, proud and happy I am to be a part of making this happen – I too am forever changed!” I’m overjoyed to report that all of the pups found a home and are living happy, healthy lives. Safe, secure and snuggled up in the USA!

It just goes to show the wonderful things that can happen when people work together!

Hopefully, cultures that still use dog meat farms will change their ways and until then it is so heartening to remember that individuals like Nami Kim continue to fight the good fight!

Would you have been first in line to adopt one of the rescued pups? I know I would have been! Let me know your thoughts in the comments!