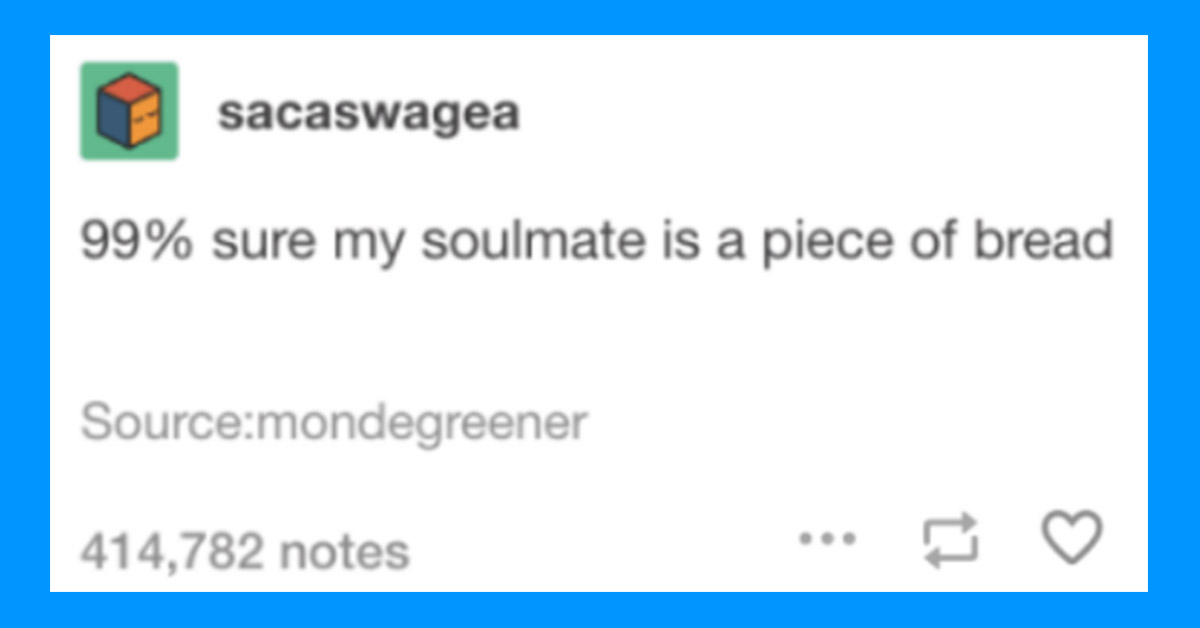 Kate Moss once said, “Nothing tastes as good as skinny feels”, but I’m happy to tell you Kate Moss is 100% WRONG. HAS THE WOMAN TRIED MILLIONAIRE’S CHEESECAKE?! I. THINK. NOT.

It’s good to love food. It feeds your body and fuels you throughout your sassy, successful day, so don’t you ever apologise for loving what’s on your plate, gal! In fact, if you’re anything like me, you’ll probably care about what’s for dinner more than you care about settling down, having a husband and popping out some kids. HA! I don’t need social interactions! I don’t need friends! Or romantic partners! HA! I’D RATHER HAVE MORE CAKE FOR ME.

So maybe you’re alone with your cake, but you’re definitely not alone in your preference for pudding over people and these tweets prove it… Love has nothing on Mozzarella Sticks. How dare anyone insinuate otherwise.

2. Throw The Whole Man Out

You’d really feel that you were living with a stranger/sociopath, wouldn’t you?

The best diet I have ever heard of. All on board the snake diet train! Food is precious. I’m not about to share my sustenance with you, FOOL.

This is a particularly steamy short story. Who knew something so cold could get you so hot under the collar??

Honestly, how many emotional films would have benefitted from the addition of a chicken finger wiping away the protagonist’s tears? The answer is ALL OF THEM.

People will just let you down. Trust that Cheez-Its will always have your back, until the very end. There’s nothing worse than wasted food. Except maybe wasted wedding food! That stuff is expensive and should be treasured!

GIRL. THIS IS A MOOD IN AND OF ITSELF. THANK YOU FOR SPELLING IT OUT FOR US, QUEEN.

This is when I hit peak performance. I’m at my happiest when nobody and nothing can hurt me, snuggled up with my food and my movies. Remember, girls, boys will break your heart but pizza never will!

Pizza will give you the time of your life, time and time again. Why would you pass that up? It’s the only thing better than sex!

14. Hostage To The Food Cravings It’s inescapable, we’ll never be free. The sooner we accept it, the sooner we can move on.

Please leave, KEVIN. Can you not see I am having a moment with the pepperoni?! It’s your food if you lick it, so if you want it, lick it! The cinematography is just exceptional. Look at all that beautiful ham.

I’m worried about this lack of commitment to bread. It’s all or nothing, girl. The best way to make any failed meal better?? CHEESE. ALL OF THE CHEESE.

Who has the energy to be elbowing friends (or as I prefer to call them; scavengers) away from their food? It’s better to keep yourself (and your pasta bake) to yourself! Which of these did you relate to most? Is there a particular food you just CANNOT resist? Let me know in the comments and be sure to stay sassy xox