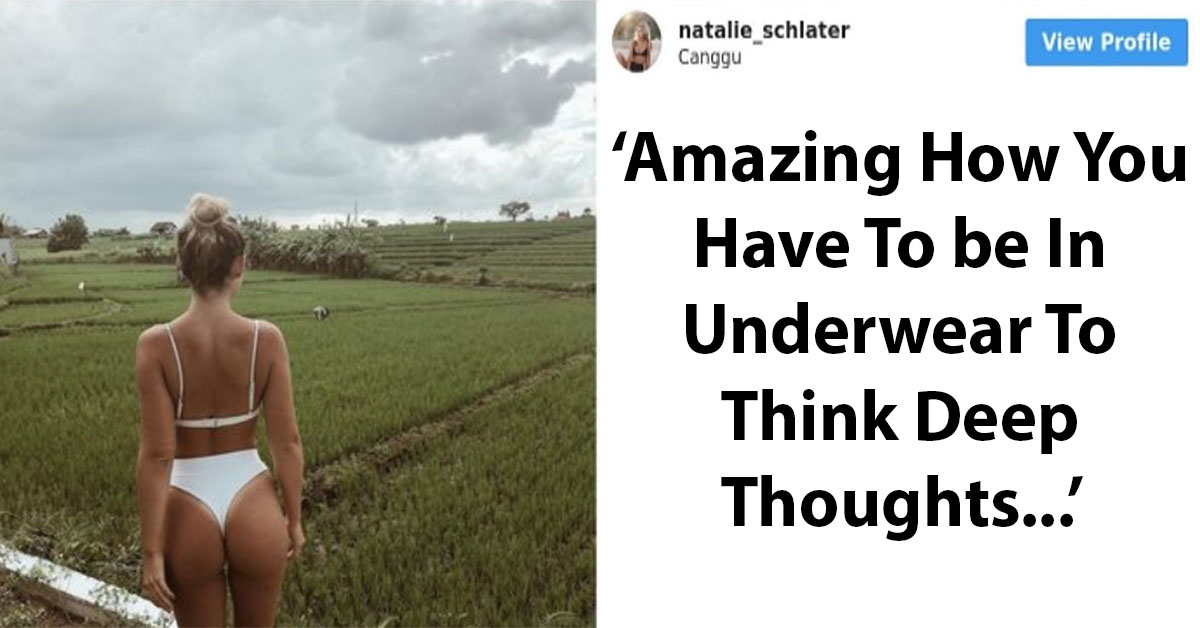 A Swedish Instagram model has had to delete her social media accounts following the immense backlash following a photo she posted of her wearing a bikini with a caption seemingly comparing her life to that of a hard-working rice farmer. The internet is not a forgiving place for some, and the most recent victim of its immense tidal force of public opinion was Instagrammer Natalie Schlater who received the brunt of social media’s force over a controversial caption to a post of her wearing a very revealing bikini while on holiday in Indonesia.

Schlater posted the brazen photo featured below while on holiday, with the caption, ‘Thinking about how different my life is from the man picking in the rice field every morning.’ This is quite possibly the most ill-thought-out social media post in recent times!

Most of Natalie’s 12, 000 followers were left feeling outraged at the post, claiming it to be ‘insensitive’, ‘narcissistic’, and generally crass – and it’s hard to see fault in their position really!

The idea that she would think comparing her life (which doesn’t exactly seem to be too immensely strenuous if I’m honest) to that of someone who farms every day for rice, all while wearing such a revealing outfit, comes across as completely thoughtless – and also, politics aside, it’s just damned pretentious. The backlash was so profoundly negative and came in so quickly that if you’d have tried to open the post on a smartphone, there’s a good chance your phone would have just burst into flames.

Responses across the internet’s many planes were all resoundingly negative, with people commenting with the likes of:

‘Thinking about how different your life is from his? He WORKS for a living and actually does something USEFUL for a start.’ – Greg Fam

‘Instagram models are among the lowest forms of life’ – Christina Anton

‘I get that people like to take a good picture but this new level of narcissism, lack of empathy and tone deaf is sad. Your looks will fade and the attention will die with it. What are you trying to accomplish beside a momentary pretty picture for someone to gawk at? Kind of sad because young generations of girls are trying to live up to this artificial standard of faux reality.’ – Thuy Phan

Natalie tried to extinguish the social media firestorm she had wandered into by changing the caption on the photo in an attempt to explain what she meant by the post.

She changed the caption to emphasise how she was ‘misunderstood’, and pompously begged people to ‘spread kindness and not hate.’ However, the asbestos clad fist of the internet was unmoved by her apology.

I think one of the main reasons why this apology didn’t work was that it comes off as, yet again, pretentious. As opposed to simply apologising for her actions, the end of her ‘apology’ comes off more as though she’s saying, ‘Hey, be nice to me or else!’ Natalie was ultimately forced to delete her social media accounts due to  the extent of the backlash from the post, and spoke to website Bored Panda about her experience.

She said, ‘It really breaks my heart to see this photo turned into a different light then it was originally meant to be. I have always loved the Indonesian people and their culture and overall attitude towards life and the people who come to visit their country.

‘I worked extremely hard (at my normal everyday job) to save up enough money to go on that trip as I do not come from wealth as it may look like from social media (I know everything on this app is not as it seems).

‘I completely understand that my caption can be taken wrong because of the social climate we live in today and if I could go back in time I wish I would have just worded it differently.’ I can’t believe that someone would post something like that without even assessing, or in any way anticipating, how that may be read, especially if you’re a social media influencer!

I just can’t wait for the unifying moment when every shallow person who either works as an influencer or idolises one, realises that their own reality is more important than anyone else’s material fake online persona! Stop idolising these people, and instead, go and follow the likes of scientists and artists who are working to create something new and interesting instead of trying to flog you a moisturiser and a false reality.

What do you make of this story? Do you think she was misunderstood? Let me know in the comments below and tag anyone you think would enjoy this story… if enjoy is the right term!