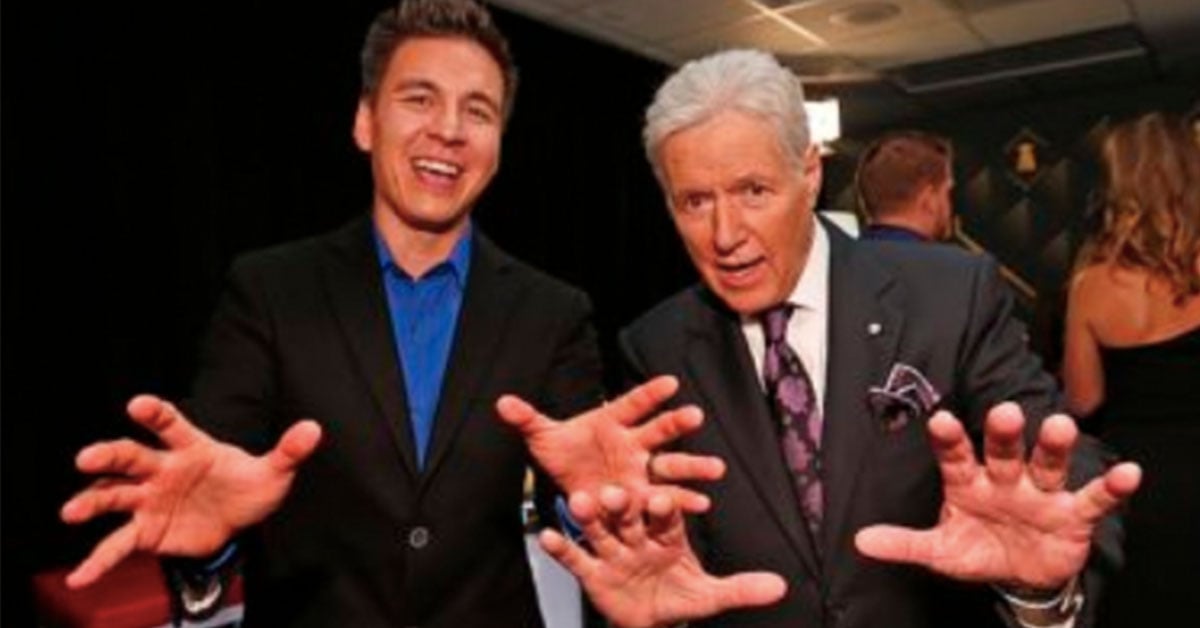 Jeopardy! champ James Holzhauer donates a portion of his winnings to cancer research in honor of host Alex Trebek after his diagnosis

In case you’ve been living under a rock for all these years and aren’t aware of who the heck James Holzhauer is – well, he’s the longest-standing champion of the hit game show Jeopardy, and he has decided to give a little back.

Holzhauer has managed to rack up a whopping total of $2,462,216 all from his 32 straight games on the show, and now the 34-year-old has reportedly donated quite a sizable portion of the money to charity under the show’s host, Alex Trebek’s name. There really is still some good out there in the world!

As I’m sure everybody is very aware, Trebek – who is 78 years old –  is sadly fighting a hard battle against pancreatic cancer.

And for this reason, Holzhauer recently pledged $1,109,14 to the 2019 Naperville Pancreatic Cancer Research Walk situated in Naperville, Illinois ‘for Alex Trebek and all the other survivors.’

What an absolutely incredible gesture. Okay so I know what you may be thinking; that’s an incredibly off amount of money to donate, ain’t it!? Well, yes, I agree. But there’s a story behind that as well. You see, those numbers combined hold a very large significance to Holzhauer himself; they’re his four-year-old daughter, Natasha’s birthday. Just when you thought it couldn’t get any more freakin’ adorable!

On what turned out to be Holzhauer’s final episode on the show, Trebek thanked him warmly for the card his daughter had made him.

‘I want to express my thanks to your beautiful little daughter, Natasha, for having made this get well card for me,’ he said to him. ‘That was very sweet of her.’ Ann Zediker, who is a host currently raising money for the fight against pancreatic cancer, reached out to Holzhauer asking him to attend the upcoming event on July 14th after watching him avidly on the show.

Trebek also used to live in Naperville and he even went to school there as well!

‘My gut told me it was the right thing to do,’ she said in an interview with the Chicago Tribune. ‘It couldn’t hurt.’

It’s also a very close cause to Holzhauer’s own heart, as he tragically lost his father to the monstrous disease back in 2010.

While he wasn’t able to make it to the event himself, he did respond and her let her know he would be more than happy to make a donation towards the wonderful cause.

‘There was no expectation on my end,’ she told CNN in an interview. ‘I was just thrilled that he responded. I knew that Alex’s story had an impact on him, just like it has an impact on anyone who’s working with a family member who’s going through pancreatic cancer.’

Oh boy… I can feel the tears starting already! Trebeck actually only went public with his stage four diagnosis back in March of this year.

While the cancer has just a mere nine percent survival rate, he told PEOPLE back in May he is ‘near remission’ after responding well to chemotherapy, which I think we can all agree is an absolutely amazing thing to hear, is it not!?

‘It’s kind of mind-boggling,’ Trebek said during the interview. ‘The doctors said they hadn’t seen this kind of positive result in their memory … some of the tumors have already shrunk by more than 50 percent.’ In case you’re already grieving over Holzhauer’s departure from the show, then never fear! As he is reportedly set to return to the show for the 36th season for Tournament of Champions edition. And what a darn champion he is!

Lest we forget; he made history after hitting the two million dollar mark on the show, which made him one of only THREE players to do the same in the history of the world. Now, how’s that for a legacy, eh!?

He sadly (although I’m not sure sadly is the right word, considering how much money he has actually banked beforehand) lost to contestant Ken Jennings who went on to win a RECORD amount of $2.52 million dollars… I knew I should have applied for that freakin’ show when I had the chance!

Anyway, I hope that has brightened your day a little, if anything. The world can seem like a pretty miserable place most days, so it’s good to know we have everyday heroes out there like James Holzhauer making wonderful things happen any way they can, right? And of course, here’s to wishing Mr. Alex Trebek himself a full, speedy and as painless a recovery as possible.