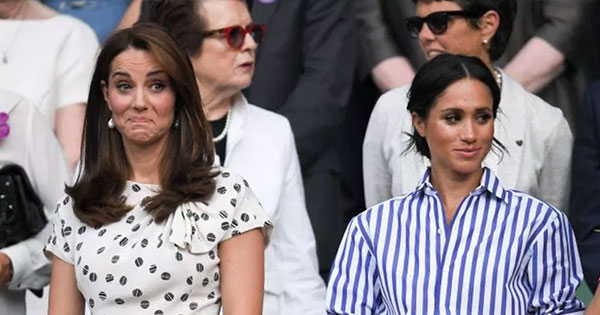 Sisters at war is never new news, but when it is regarding the duchesses, we’re all ears!

The latest accounts from the palace have stated that Kate, the Duchess of Cambridge, is envious of Meghan, the Duchess of Sussex, and how naturally she has taken to royal duties.

Recently, a friend of the Royal family told US Weekly that: Gals, tell the truth now, are those some fake smiles we spy?

Meghan has taken to her newly found fame with beauty and grace (‘she’s Miss United States’ – can anyone name that film?). We all know that Kate didn’t necessarily have the easiest of times when she became engaged to Prince William, so has found Meghan’s easy transition hard to swallow.

The US Weekly source went on to state:

Does Kate know that Meghan was once an actress or has baby-brain made her forget that vital piece of information? Meghan is most probably used to the media attention that other halves of royal family members get – she did witness what Kate went through after all!

Even though she is jealous, Kate isn’t stupid, she is married to a Prince! The source continued to say that Kate knows what is expected of her at these events, she leaves people in awe:

‘with her ability to paste a huge smile on her face’. It mustn’t be forgotten that one day Kate will be the Queen of England; a fact that the source was keen to discuss:

‘She knows she has a responsibility to be front and center, given that one day these events will be in honor of her husband. It’s something she’ll have to work at for the rest of her life’.

In April of this year, it was revealed that Queen Elizabeth was giving the Duchess of Cambridge lessons on how to be more “queen-like”. It’s The Princess Diaries in real life!!! Some people get all the luck…

Rebecca Long, an expert on the royal family, spilled all the tea to US Weekly:

‘Kate’s been taking on new responsibilities little by little over the last few years, so it won’t be a shock when the time comes. William and Kate are the favorite royals to take the crown in many generations, so the people of the UK are very excited about it’. Someone else told the magazine that Queen Elizabeth has:

‘really taken Kate under her wing. The two of them will often spend hours discussing royal life and the future of the monarchy’.

Kate being jealous of Meghan is just another addition to the long-lasting feud between the sisters. It has been rumoured that the pair do not get along since the announcement of Harry and Meghan’s engagement. However, the media portrayed the story as Meghan being jealous of Kate and everything that she has brought to the world of the royals – maybe we had it the wrong way round the entire time?

Although it might be true that the pair come from different backgrounds – England for Kate, America for Meghan; a solid, nuclear family for Kate, a very complex family dynamic for Meghan; a short-lived career in the accessories world for Kate, a full-time high-profile acting career for Meghan.

Okay, so, they may be more different than originally appeared… but one thing is for sure, they love their princes with their whole hearts!

Someone pass me the tissues.