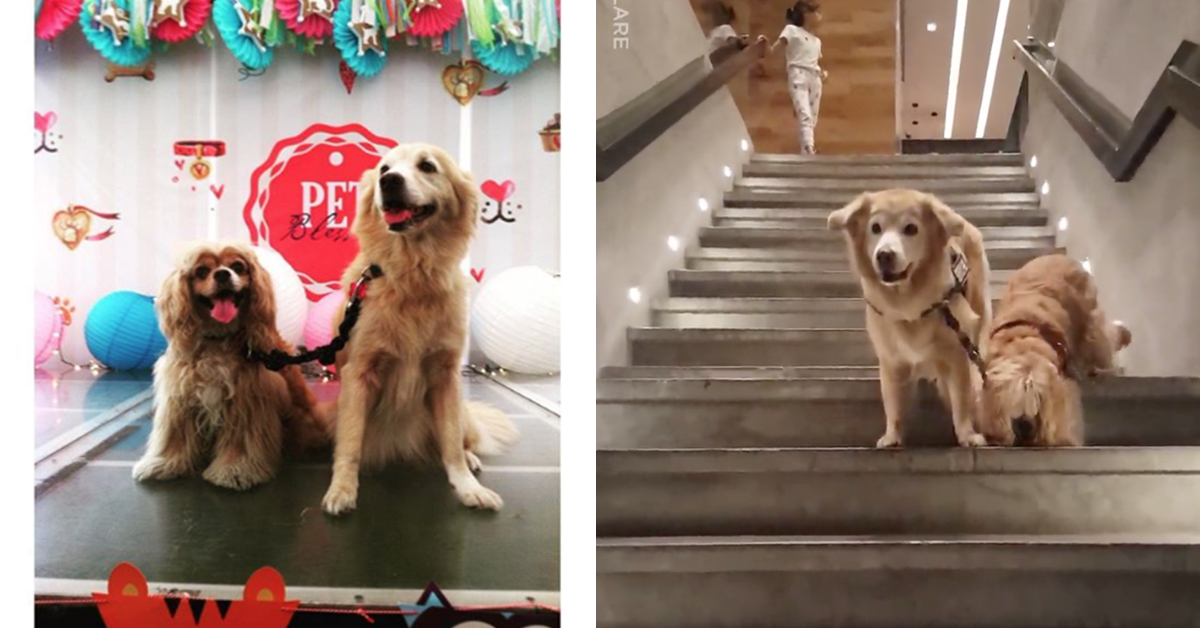 Are you all ready for another round of Aunty Acid’s Feel-Good Footage? Well if not get ready because this is my favourite one yet. We all know about the wonderful world of service dogs, the furry four-legged best friends who go the extra mile to help their human counter parts. Well… did you know that it’s not only humans who can benefit from service dogs? You do now.

This week, footage of a blind dog trying to make its way down the stairs with a helping paw from his very own service dog serviced online, after being filmed by their owner and thus waring the hearts of thousands across the globe.

The furry pals were filmed leaving a hotel together in Quezon City, in the Philippines as the Golden Retriever service dog, also known as Ginger, patiently leads his blind bestie, a Cavalier King Charles Spaniel named Kimichi slowly down the steep steps. As you can see, Ginger takes it one step at a time as Kimichi tentativley follows, showing the incredible bond and the pure trust the two Good Boys have built together.

See the adorable pair for yourself by watching the video below:

Being the inspirational pair that they are, Ginger and Kimichi are often invited to provide emotional support to people such as hospital patients, stressed-out students (we’ve all been there eh folks?) and company employees.

The person filming the dogs explained how Kimichi and Ginger first met:

He was later adopted by a family with a Golden Retriever mix called Ginger, who is now almost 13 years old. Since then, a very special bond has developed between the two.” And that wonderful family he mentioned was Eric and Thea, who also have a second Golden Retriever called T-Bone and they explained to the people at When In Manila how Ginger had immediately bonded with Kimchi when they first saw her at the animal rescue shelter.

Ginger rejected all the other dogs, until we came across Kimchi.

(No I’m not crying, YOU’RE CRYING!)
But despite this, the plan was never for Ginger to become Kimichi’s guide dog. This pretty much happened by accident at first. Eric and Thea initially started to leash Ginger and Kimichi together just so Kimichi wouldn’t keep wandering off and bumping inot things. However, Ginger naturally started leading the little Spaniel around and patiently walking next to her. And since then, the rest is history, and the two have literally been inseperable since! People talk alot about friendship goals… well, for me, these two are the ULTIMATE friendship goalos. and just look at their happy little faces!
I hope we’ll be seeing more of this inspirational duop in the future!