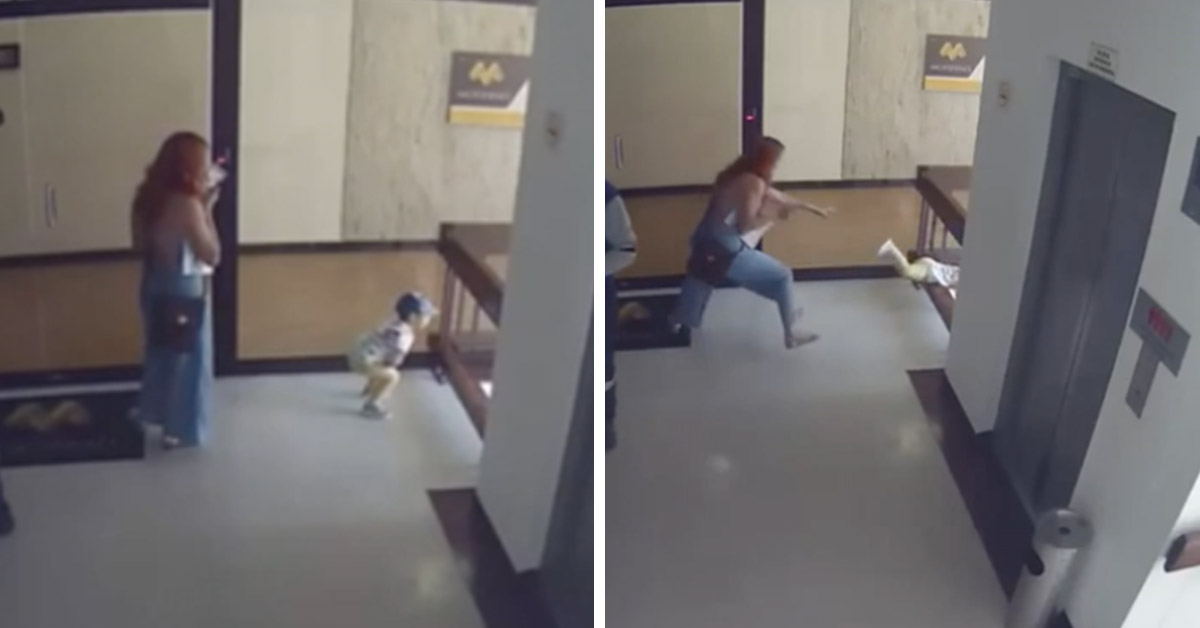 There’s something seriously spooky about near-misses, right? You know what could have happened and you just thank goodness it didn’t!

That’s certainly what was running through the minds of those who saw this shocking CCTV footage that shows a mother saving her son from a nail-bitingly narrow close-call. In the CCTV footage (which was later uploaded to Reddit) a Mother and child are waiting on the fourth-floor landing, whilst the mother briefly (a matter of seconds, even) looks away from her child he crouches down between the balcony railings.

This is where one would assume glass, or further railings would be in place! But not in this case.

The child, clearly expecting to a glass barrier, reaches in front of himself but, in a sweaty-palm moment of panic for watchers, is met with empty space. He proceeds to tumble straight through the gap.

You can watch the footage here. It is miraculous that the mother is able to grab the boy (by what appears to be his ankle) just before he topples completely over the edge. With super-woman strength the mother drags the boy back up onto the landing and to safety, holding him close to her and no doubt soothing a very scared child!

Others, clearly alerted by the commotion, join the mother and child on the landing and crowd around the boy, evidently trying to help. If you ask me, the kid would probably only want cuddles from his Mum until he felt better! Poor baby! The video has since gone viral, sweeping the internet and garnering reactions from panic to anger to confusion. Just how does that Mum catch him like that and with not a split-second to lose?!

The answer is simple, Mum’s are awesome and possess super-powers. So that’s that one sorted.

Commenters frequently raised their confusion with the balcony set-up, why had it been left unprotected when any one of a child’s height could easily (and very nearly did!) fall straight through it. Some termed the scene “a lawsuit waiting to happen”, I have to agree with them! Of course, the usual pessimistic brigade were quick to lay the blame squarely at the mother’s feet because (presumably) these people have no idea how difficult it is to keep an eye on a child at all times. Especially considering the talent everyone under the age of ten has for finding the most dangerous activity possible in two seconds flat and committing themselves to it with exceptional gusto.

Leave the Mum alone, she saved her child from what could have been a serious injury, she deserves praise and not criticism! Though it hasn’t been confirmed whether the child was uninjured from his near-fall it is enough to be comforted that things did not go as badly as they could have done. Whatever injuries may have sustained I would imagine them to be minor and nothing in comparison to what may have been.

Have you ever had a similarly close-call? Or did your Mum once save you from a seriously close-call? Let me know in the comments!