Nightmare Bridesmaid Takes Picture Of Bride In Her Dress Pre-Wedding, Posted It On Facebook & Tagged The Groom

Nightmare Bridesmaid Takes Picture Of Bride In Her Dress Pre-Wedding, Posted It On Facebook & Tagged The Groom 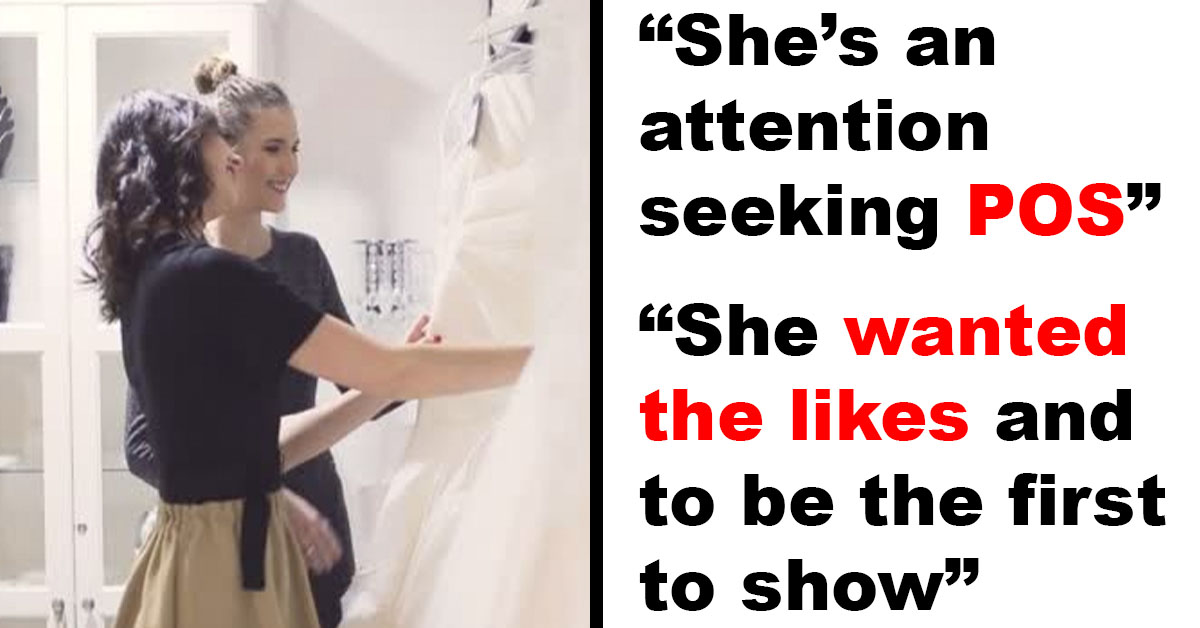 Women – we’re all different, right? We have different styles, different opinions, different interests, different ways of life… but if there’s one thing women can all universally unite in absolute OUTRAGE over… it’s without a doubt stories bridesmaids who turned into complete and utter nightmares… amiright? Of course I am.

So buckle the heck up ladies, because boy oh boy do I have a story and a half for you. This particular story was actually shared by a bride-to-be on the popular anonymous posting forum Mumsnet, and I think it’s safe to say that it had women pretty much EVERYWHERE shaking their fists angrily over what has to be one of the worst bridesmaid faux pas EVER… and no, for once I am not over-exaggerating.

During her post, the bride in question explains that after much back and forth, she’d finally “found the one,” and returned with her friend for one last fitting.

She describes herself as overly “body conscious,” (and in this day and age which freakin’ woman doesn’t!?) which meant the entire dress-shopping process was somewhat anxiety-inducing for her, as if it wasn’t already stressful enough! Eventually finding the perfect dress, though, was a major relief.

And so, on the day of the fitting, all was well, everything was going the way it should be, and her bridesmaid even excitedly snapped a photo of her in her gown in order to commemorate the special occasion! Which is a totally normal thing to do, right?

Alas, mere hours later, the bride herself was absolutely STUNNED to see that exact picture of her in her wedding dress being plastered all over Facebook for everybody and their aunty to see. EVERYBODY.

YEP, that’s right, that snake of a bridesmaid ACTUALLY DID THAT, PEOPLE. I mean can you believe it!? Has she never been to a freakin’ wedding before? does she not know how this is all supposed to go down!?

And what makes it even worse? (Yep, I know it seems unlikely but it actually does get worse) well, that wasn’t even the worst part of this whole ordeal…

The WORST part is that the so-called “friend” also tagged the bride’s freakin’ fiancé in the post…. her fiancé!!! Just to make extra-certain he saw. HER. FIANCE!

I know I know, what the actual F-

In her caption, the friend allegedly added that she bet he couldn’t wait to marry her and noted how lovely her dress was.

Obviously, the bride says that she immediately asked the friend remove the post — and was said to be completely floored by her bridesmaids’ response.

“It doesn’t matter if he’s seen it, he’s a man so he will have forgotten what it looks like in 5 minutes time,” the friend allegedly said back.
Wow. Just… wow.

The poster (aka, the bride) actually admitted she was “unsure” of how to feel or what else to do (I mean, I could totally give her a few ideas of what she should do), but she couldn’t pretend it didn’t bother her.

“I am so gutted that it now won’t be a surprise to my partner or my dad,” she wrote. “She knew how much that meant to me and the only thing I had asked for was that details of how I will look on the day were kept a surprise from my dad and partner.”

And it’s not like she could just switch the dress for another one. Aside from this one taking a whole LOT of time an effort to find, she’d also just finished paying for it in instalments and had gone to all the fittings and alterations too, so she couldn’t exactly let all that effort go to waste.

Of course, because the internet is a hotbed of people who love being infuriated on the behalf of others,  it wasn’t long before posters started chiming in and were equally as miffed by the whole thing… and rightly so!

Many said they’d be “furious” if this happened to them — and weren’t holding back with their commentary.

“She’s an attention seeking POS,“ wrote one woman.“She wanted the likes and to be the first to show. You have every right to feel disappointed and hurt. If I saw a photo like that I would think your bridesmaid was a sh*t friend and attention seeker!”

(Word to the wise: Don’t mess with that woman… I would like to be her very best friend though)

Another said there was only one of two options here:

“She [either] a massive b*tch or a complete idiot.”

“She definitely wouldn’t be my bridesmaid any more.”

And I agree, kick that crazy chick to the CURB!

Unfortunately, there is no word yet on whether or not the anonymous poster will actually be resorting to measures which are that extreme (however, absolutely nobody would blame her if she did!), but clearly if it had been up to the wonderful ladies of Mumsnet, she’d be finding herself out of the bridal party faster than you could upload a photograph to Facebook- oh, wait.