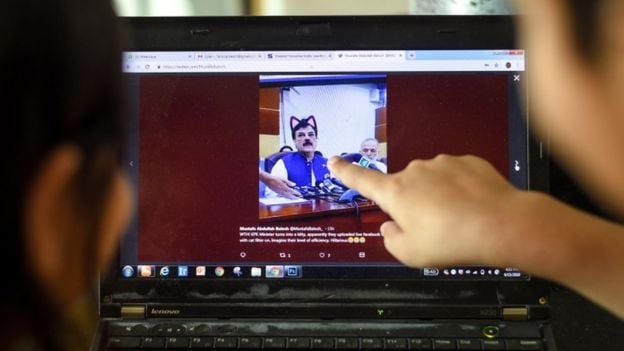 If there’s one way to boost press conference ratings and attendance, Snapchat filters on the Pakistani government is the gift that keeps on giving…

‘What are you talking about?’ I hear you ask. Well, it turns out that live streaming the government on Snapchat may not be the best idea – especially if you happen to forget to remove any comical filters beforehand…

During an important press briefing conducted by the provincial government of Pakistan’s Khyber Pakhtunkhwa, it was agreed that the event would be streamed in order to generate interest amongst the parties. This would have most definitely been a great idea if it weren’t for one teeny tiny error.

Unsuspecting viewers watched in shock as regional minister and advisor to the Prime Minister Shaukat Yousafzai magically grew whiskers and pink pointy ears during his interview with the press. Non-surprisingly, the professionalism of the event was slightly tainted.

Want to see these political leaders turn into kitty cats? You know you do! As you can imagine, the politicians were not taken quite as seriously as they might have hoped for. Almost immediately, viewers took to social media to poke fun at the silly stream. Pakistani journalist Mansoor Ali Khan also joined in:

Unaware of his feline features, the regional minister continued his speech. Guess we can’t all be purrfect, can we?

You’ve Cat To Be Kitten Me

Even though the filtered stream only lasted a few minutes, the cat was literally out of the bag! Screenshots had already circulated the internet and everyone was talking about it. Instead of discussing political agenda, the public were busy debating the ‘cuteness’ of the Minister and his two officials.

The occasion, of course, went viral and lead many to hope that future government meetings would be conducted in a similar manner. Will Cat Ministers become the latest trend?

Once the stream had ended, the video was deleted from the official Facebook page of the Pakistan Tehreek-e-Insaf (PTI) party.

Don’t Be A Sourpuss! ‘The cat filter was turned on by mistake, let’s not take everything so seriously. I wasn’t the only one – two officials sitting along me were also hit by the cat filter.’

The culprit turned out to be a ‘hard-working’ volunteer. We can’t imagine they’ll be doing a lot of volunteering for the officials in future!

The PTI’s social media team released a press statement shortly after the ‘incident’, stating that:

‘All necessary actions have been taken to avoid such incidents in future.’

They even went on to release a ‘clarification’ detailing the incident. Okay, it may have gone a bit too far now.

They Must Have Been Feline Guilty… The team put the humorous mistake down to simple ‘human error’.

In spite of the government’s futile attempts to make the situation less humiliating, people continued to react to the news.

They Had No Choice But To Keep Pawsitive If anything, the filter fiasco might have actually been a good thing for the government – we’re sure the public will be tuning into future streams from this day forward!

According the The Guardian, the party even admitted that they felt proud to have brought Pakistani politics to the internet. See? Silver linings! They also added that it had even boosted the country’s use of social media.

So it sounds like the government actually owe us a debt of catitude…eh? eh? Too far? Anyway, you heard the government, continue in your meme-making endeavours!

The Government Had Their Thinking Cats On At The Conference So this happened today when PTI’s SM team forgot to turn off the cat filter while live streaming a press conference on Facebook. @SAYousafzaiPTI looks kinda cute pic.twitter.com/IjjJrua7DL

‘I propose all parliamentary proceedings around the world to be recorded with Cat Filters. Please start with the British Parliament!’