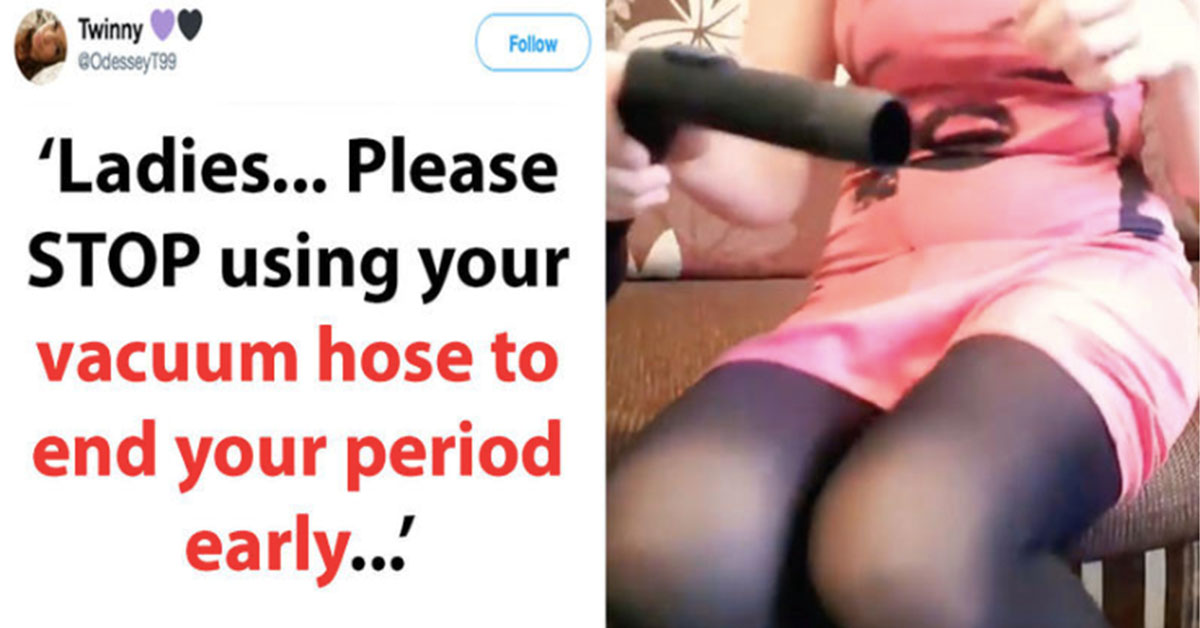 Ladies, we’re all too familiar with that ice-cream devouring, sweatpants wearing woman that turns up every month, feeling like she just wants to lie around watching reruns of Friends for 3-7 days. As our periods arrive, we’d do anything to get rid of those agonizing cramps. But two women in Seattle are taking things a bit too far when it comes to ending their period as quickly as possible!

A tweet by a nurse from Seattle recently went viral as she pleaded for young women to stop finding extreme ways of ending their period early. Her tweet followed the admittance of two women into hospital after they tried to use a domestic vacuum cleaner to suck out blood end their period quickly.

The nurse (@OdesseyT99) caused something of a reaction on Twitter gaining over 7,000 retweets and likes and 1,800 replies. Of course, much of the reaction is part of the epidemic of periods still being a taboo subject, only to be joked about if mentioned at all – come on, it’s 2019 people, women have been menstruating for literally hundreds of thousands of years!

But the healthcare professional who took to Twitter was keen to point out that such drastic and bizarre actions are a serious threat to women’s health. She reported that the two young women, aged 19 and 23, were lucky to be alive. The potential damage includes blood blisters and uterus perforation resulting in septic shock!

She also went on to clarify her Tweet given the amount of people understandably struggling to understand how and why someone would attempt to use a vacuum cleaner to suck out blood and tissue:

“I don’t know if it was Eureka, Dyson, Hoover or some Walmart brand, but yes… An actual vacuum cleaner.”

Various medical staff at the hospital involved in treating the patients have weighed in on the apparent need to educate people about the implications of using a domestic cleaning item to maintain good genital health. Consultant gynecologist Dr Alex Eskander outlined some of the dangers of putting a vacuum cleaner where it shouldn’t go:

“Vacuum cleaners are used for cleaning the floor and other dirty items, and so harbor bacteria. Vacuum cleaner hoses should not be inserted into the vagina. It’s very important to keep the vulva area clean as introducing external bacteria could lead to infections.” Strange that he failed to address the question on everyone’s lips: why would anyone think it was a good idea to try it?

I suppose the sensationalism surrounding this case of what can only be described as a bizarre and unhealthy act is further proof that, despite it now being the 21st century, we are still failing to prioritize women’s health. Previous reports of women behaving in irrational ways which put their gynecological health at risk have been linked to the menopause or to cases of poor mental health. It certainly isn’t a push to question whether the reported behavior of these two women wishing to end their periods early is because of the taboo nature of periods in society.

We may have come along way since the days when female hygiene products couldn’t legally be advertised on television – the word “period” was mentioned on TV for the first time in 1985 (yes, you read that right, 1985!) But there are  still many issues involved in shaming women about their natural bodily functions, whilst period poverty is an alarming reality in the UK and USA as well as in developing nations. From the way women are encouraged to hide sanitary pads and tampons, to the pervasiveness of beliefs that women who are menstruating are “unclean”, our society tells women that periods are shameful, dirty and disgusting. In fact, they are natural, healthy and so very very normal.

Now, we’re not saying that the women who resorted to using vacuum cleaners did so because they felt embarrassed or shamed about their periods. But it’s certainly an angle that might explain why young women all over the world often do resort to desperate and dangerous acts to end their periods.

So yes, vacuuming your vulva is an incredibly dangerous and rather stupid thing to do. But perhaps what needs to change is the way we talk about menstruation. Rather than shaming young women about their first period, let’s teach our daughters how to take care of their gynecological and sexual health and to look after their emotional well-being when their menstrual cycle takes control of their hormones. Let’s stop contributing to period shaming and start embracing the reproductive power of periods. Period!