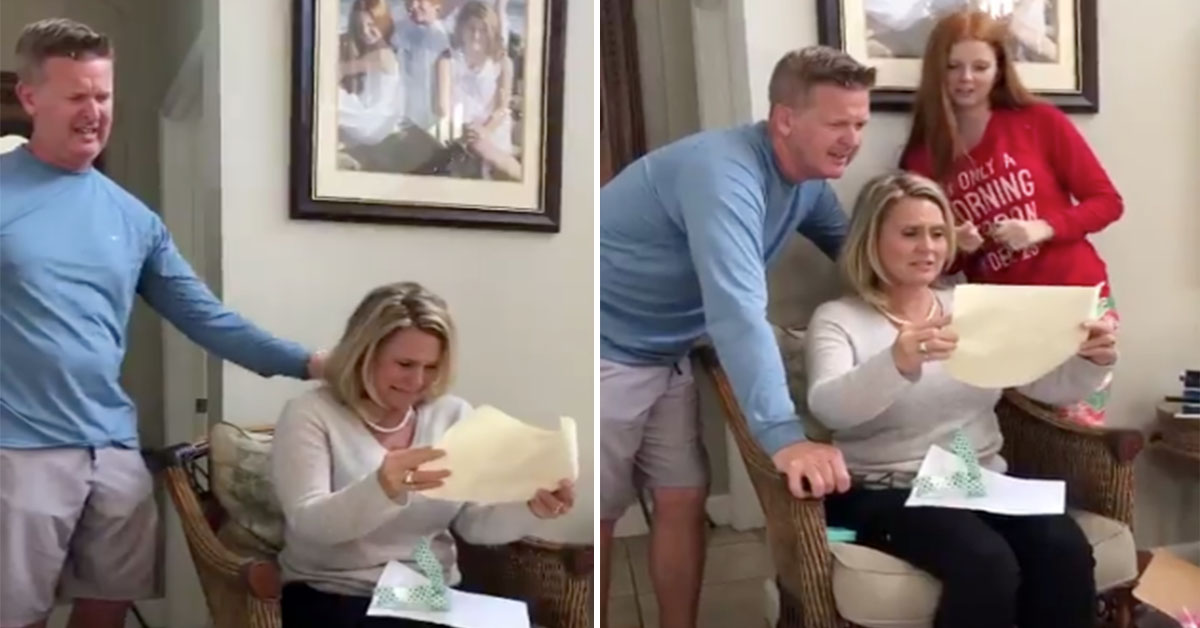 When professional baseball player Pavin Smith received his first paycheque, he didn’t blow it on a new car, or a nice house for himself, instead he decided to show his parents how much he appreciated them. When he was 21, Pavin Smith (pictured below) was the seventh overall draft pick in the baseball draft and was signed to the Arizona Diamondbacks.

As a part of the deal he was also given a $5 million bonus. However, whereas most people at that age would be eager to splash out on something for themselves, such as a new flash car, or a wonderful new house, Pavin acted completely selflessly and paid off his parent’s mortgage.

A video of his parents receiving the generous gift was posted to Twitter, and he captioned the moving footage:

‘Thank you for everything you have done for me! This doesn’t make up for any of it. Love you both so much. Our home is finally all YOURS. Merry Christmas!’ Pavin wrote his parents a heartfelt letter to accompany the gesture and presented it to them at Christmas.

The video shows them proudly and unexpectedly reading the letter, before breaking down into tears at their son’s wonderful generosity, with Pavin’s mother later describing it as, ‘just a huge gift that we never expected. It’s like a gift that keeps on giving.’ Even though the gift is profoundly generous, Pavin made sure to emphasise that this still doesn’t even begin to make up for all of the wonderful things that his parents have done for him over the course of his life!

Which only makes the mind boggle at the prospect of what he’s planning on getting them next year, probably something very special indeed!

The video rightfully received a tonne of praise for the overwhelming act of kindness from the young man and proved a fantastic start for his new career. What a wonderful thing, seeing a young man acting so selflessly at a time where most others would be thinking only of themselves! Pavin’s parents have done a fantastic job raising their son, and it shows in his actions.

In a similar act of kindness, ex-pitcher for the Philadelphia Philles and the Texas Rangers, Cole Hamels made headlines when he donated a property valued at around $9.4 million to charity. Hamels was praised for the profoundly philanthropic gesture, having chosen to donate the property to Camp Barnabas, which is ‘a nonprofit that facilitates summer camps and exciting experiences for special needs children and kids with chronic illnesses, as well as their siblings,’ according to reports.

The location that the charity now owns has around 100 acres of land accompanied by a 32, 000 square foot mansion located just off on the shoreline of Table Rock Lake, Missouri.

Now that is one heck of a donation! Hamels also made a touching statement regarding the charity:

‘Seeing the faces, hearing the laughter, reading the stories of the kids they serve; there is truly nothing like it. Barnabas makes dreams come true, and we felt called to help them in a big way.” It really helps to see stories of such kindness and love at a time where the news seems to be so full of hate and conflict. Hopefully, if we share these stories, and keep believing in the goodness of one another then we can encourage more acts of kindness like these in the future.

God bless these wonderful men! Let me know what you make of these wonderful acts of kindness in the comments below, and be sure to tag your friends and help share the uplifting message behind this story!