10 Quotes From 80s Movies That Remind You How Great These Films Are! How Many Can You Name?

10 Quotes From 80s Movies That Remind You How Great These Films Are! How Many Can You Name? 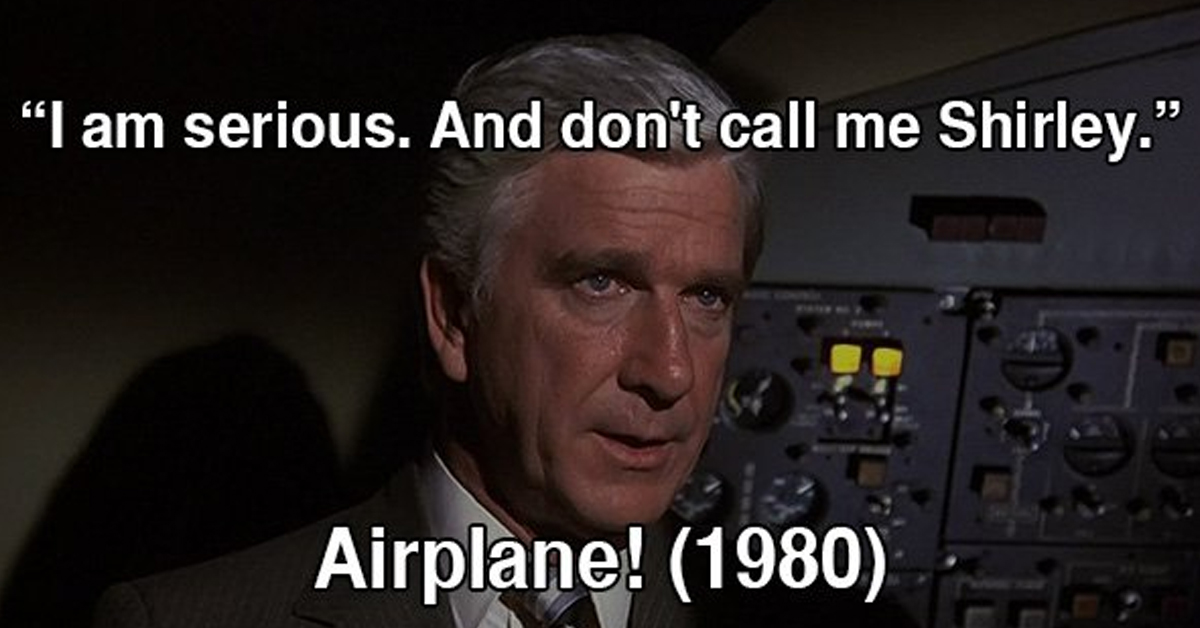 The 1980s were filled with some fantastic films, with colourful characters, fantastical plots, special effects starting to move forward in leaps and bounds, and plenty of quotable lines that you still hear spoofed and repeated to this day.

So here are some of the most memorable quotes. How many of these can you identify the films they are from, before looking through the rest of the post as we look at each film in turn?

“I am serious, and don’t call me Shirley!”

in the dark near the Tanhauser Gate. All those moments will be lost in time like tears in the rain. Time to die.”

So how many of those can you identify? Let’s have a look and comment with your score! A great comedy film, Airplane spoofed the story of an airplane in trouble when the pilots are incapacitated and they need to look to an old war veteran with PTSD for help. Full of memorable scenes and one-liners, and often imitated but rarely bettered, this was Leslie Nielsen in one of his greatest roles outside the Naked Gun films! The Blues Brothers. A film about two brothers, Jake and Elwood Blues, as they try to raise money to help the Orphanage where they grew up and believing they’re on a mission from God. Going to a country bar where they like both kinds of music – Country AND Western – and having to sing “Stand by your man” and the theme from Rawhide to calm the locals.

A cult classic and still popular today, The Princess Bride has it all, action, comedy, romance, giants, eels, Mel Smith as an Albino and a character who is simply inconceivable!

This is a classic film, that everyone needs to see, so if you haven’t then look it up, you wont be disappointed! Blade Runner – a film with so much detail in it, you have to watch it several times to get the full effect. The visuals in the film were so far ahead of their time, and there are outstanding performances by Harrison Ford, Rutger Hauer and Ridley Scott was on top form as director. A film you have to give your undivided attention to if you want to get the most out of it. Ghostbusters was one of those films that never gets old. No matter how many times you watch it you still laugh at Ray’s, “Listen. You smell something?”, stare in wonder at the Stay Puft Marshmallow Man and hold your breath as they cross the streams! A film that has really stood up to the test of time. Another of those films that can be re-watched over again and never fail to entertain. Michael J Fox was perfectly cast as Marty McFly and Christopher Lloyd as Doc Brown was simply a genius piece of casting. Inventive throughout and with a sense of humour running through it that makes you smile almost the entire way through the film. One of those movies to put on when you need instantly cheering up. Not many films have a more famous soundtrack and Dirty Dancing is one of the most recognisable and well-loved musicals from the 1980s. Patrick Swayze in his defining and most famous role, and with a lake scene that has been imitated and spoofed many, many times! Hellraiser introduced us to one of the most genuinely terrifying characters of any horror franchise with Doug Bradley’s perfect interpretation of the demonic Pinhead. Ultra gory for the time, and unsettling to watch even now, Clive Barker’s novel The Hellbound Heart was perfectly translated to the screen. Multiple sequels have failed to ever find that balance of unnerving tension and body horror. Don’t watch it with the lights off! The Fly is one of the few remakes that betters the original in every way. David Cronenberg’s take on the classic horror added some very uneasy moments that make you wince and try to look away, but you find yourself glued to the screen. Seeing Jeff Goldblum go through the transition from man to fly is genuinely terrifying, especially when he finds the only way he can now eat food…. A great work and a film that doesn’t fail to shock even when you’ve already seen it before.

So how many of the quotes did you identify? What other 80s films had classic lines that we’ve missed out? Comment with your favourites and let us know how you got on with our little quiz!