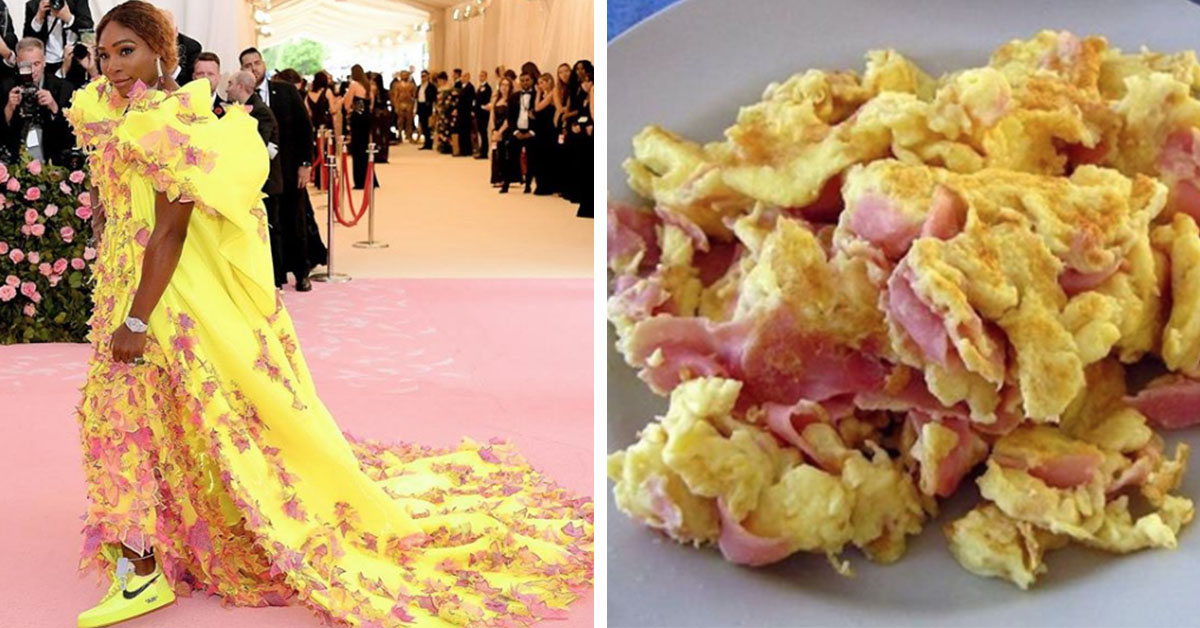 The Met Gala showcased some insane and completely over the top outfits as always; however, Serena Williams cut a truly fantastic figure in an extravagant yellow Versace dress, despite getting the meme treatment comparing her look to a plate of scrambled eggs and bacon… Ah, The Met Gala… that ‘wonderful’ time of year when I spend hours looking at ‘famous’ people thinking, ‘who the freakin’ hell are you, and why do I feel so old.’

However, when Instagram user @sennanone posted this I was relieved to recognize the tennis superstar, but couldn’t help finding the breakfast food comparison absolutely hilarious… as well as making me very hungry!

Now, I love Serena Williams so much, she’s a freakin’ hero; but I cannot stop laughing at this! And, I’m not sure whether it’s my my ingrained love for bacon and eggs (along with any other unhealthy breakfast foods), but I still think that she look amazing!

As it turns out, the little pink effects are actually beautifully styled leaves… I can’t say I’m a fan of the Nike trainers with such a stunning dress, but that sort of attitude may be why I don’t have people looking to me for fashion advice… which is a shame because I’ve got loads of trendy ideas.

Serena’s trainers did have the slightly negative effect of prompting the comment, ‘An omelette with runners ?’, which did have me chuckling away!

This sort of thing is far from new on the internet, in fact each year the internet takes it upon itself to mock the more outlandish celebrities at the Met Gala with unfortunate comparisons, and some received much harsher treatment than Serena…

Such as the comparison of Lady Gaga to Patrick Star from The Spongebob Squarepants Movie… tenuous enough? well here’s the side by side tweeted by @TheIgboWolf: