Skeleton Brunch: How a fake trend duped the internet 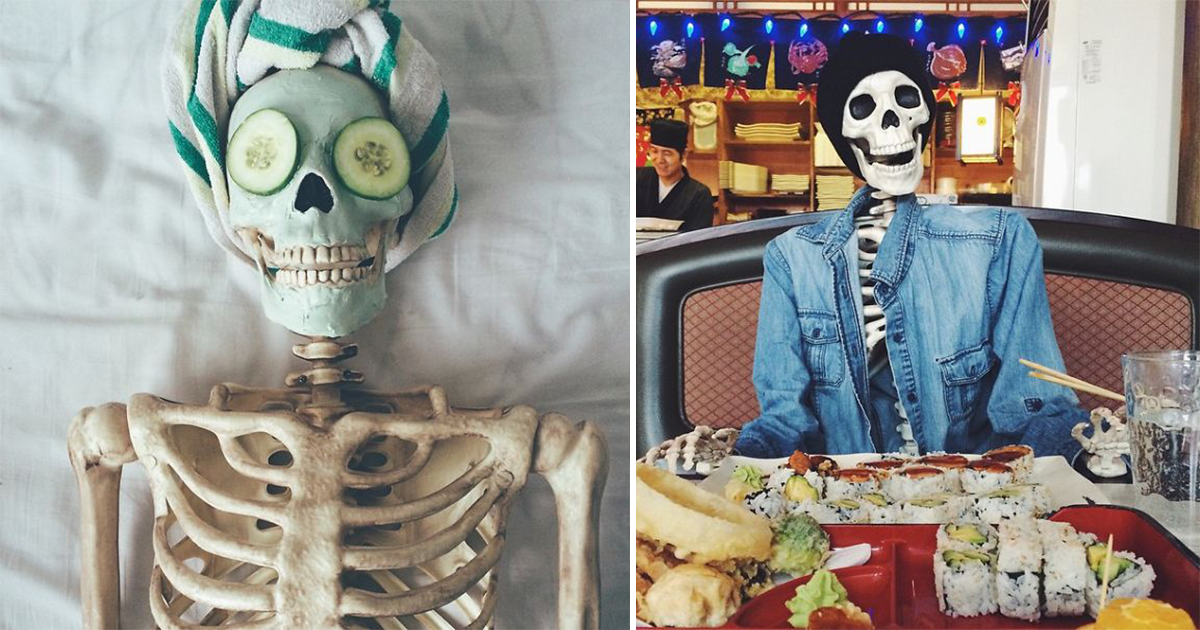 In many ways, TikTok is a whole other world when compared to the rest of the social internet. Not only is the user base significantly younger on average than that of Twitter or Facebook, but the algorithm operates in a completely different way, de-prioritising the importance of follows or the size of an account and instead pushing new content to people based on the highly specific information collected about their likes, dislikes and demographic.

In effect, this means that a person’s For You page (FYP) is far more meticulously tailored to them than their Facebook or Twitter feed, or even their Instagram Discover page. One person’s FYP can easily be totally unrecognisable to someone else, due to the incredible wealth, breadth and depth of content available on the platform. This allows microtrends to flourish, with specific dances, challenges or songs taking over whole swathes of TikTok, while people outside of the affected niches continue scrolling, completely unaware. 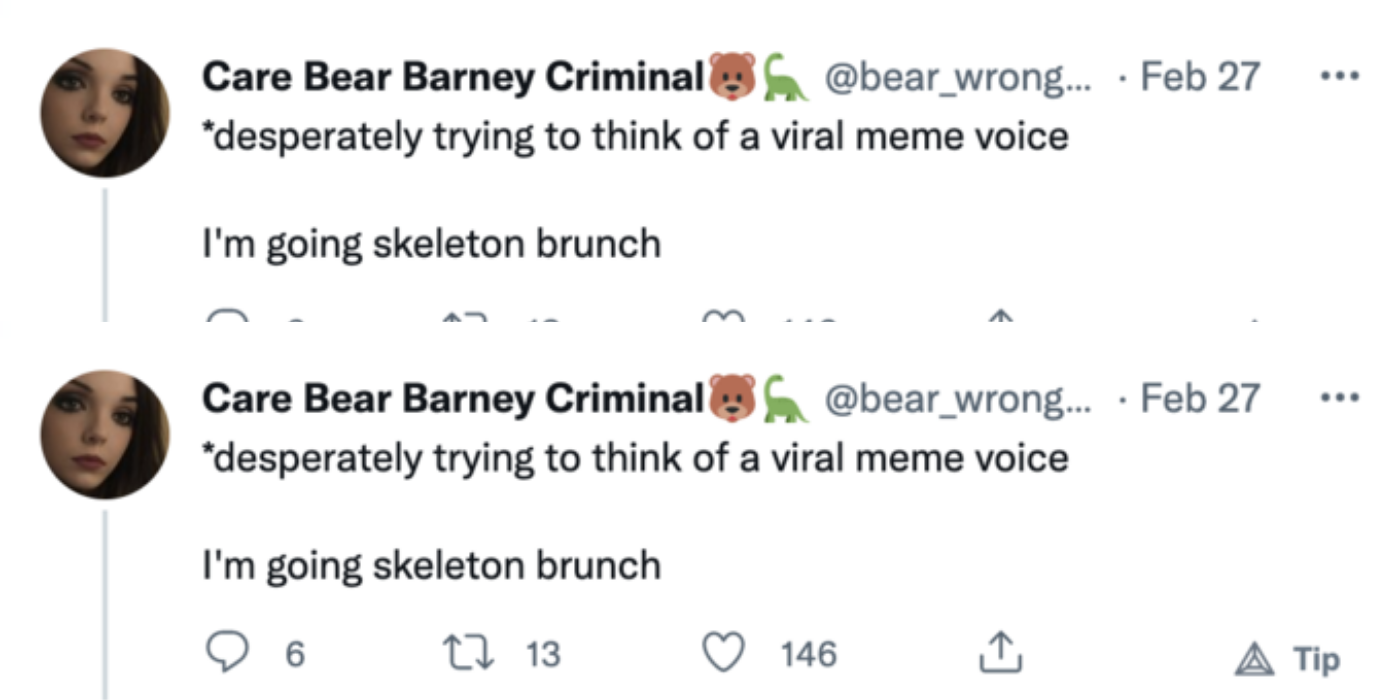 All of this, along with the mystery surrounding how the algorithm actually works and the extent of the information it collects, has given TikTok something of a mythic status on the rest of the internet. Some of the trends that do eventually emerge from the platform are so bizarre, from men dipping their private parts in soy sauce to women filing their teeth down with nail files, that it’s probably not surprising that fake TikTok trends with outlandish premises can be created out of whole cloth, without anybody looking twice.

That’s exactly what happened with the so-called skeleton brunch craze. By March of this year, multiple media outlets were reporting on the newest trend sweeping TikTok, which involved users dressing up model skeletons of either the science class or Halloween variety, and sitting down at a table with them to enjoy a delicious brunch. Oddly enough though, none of these articles could find a single TikTok to embed (and therefore cite as evidence of the challenge), despite its alleged popularity. 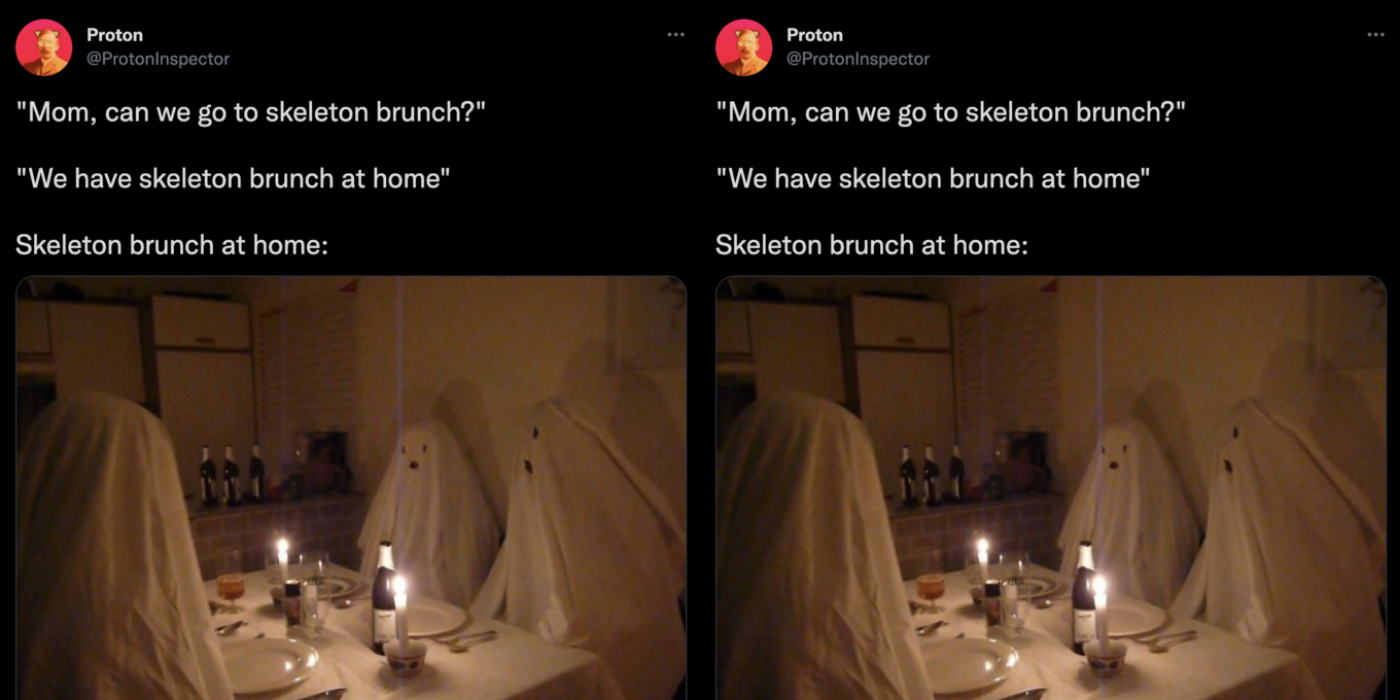 The reason for this is simple: the craze never existed at all. It was the fabrication of Twitter user @bear_wrongdoer, who made a joking tweet about desperately trying to go viral, using the kind of chaotic, meme-y language often associated with gen z and zilennial humour. The tweet read: “*desperately trying to think of a meme voice* I’m going skeleton brunch”.

The tweet didn’t attract much attention but was helped along when a mutual of @bear_wrongdoer, @meowmeowmeuw, made a reply playing along with the joke. She then made her own separate tweet on the skeleton brunch theme, combining it with a reference to another fictional internet craze that began on Twitter, called Goblin Mode. Her tweet read: “i went to skeleton brunch today and all the waiters were going goblin mode, i asked for cold water because it’s a tasty treat and all the waiters simultaneously ‘my peanus horts so bad'”. 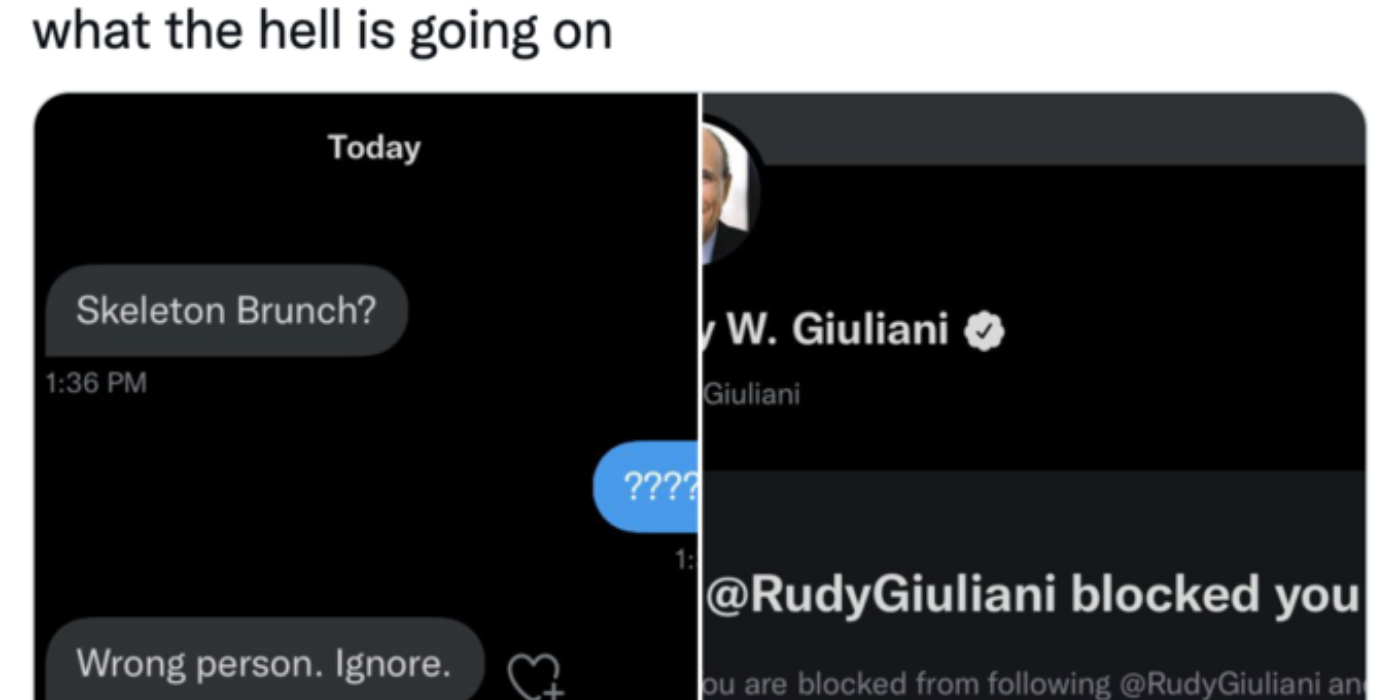 After that, things began to move a lot more quickly. Another Twitter user posted a collection of photoshopped headlines from a variety of publications, all of which referenced the skeleton brunch trend. This was the first instance of the imaginary craze being linked to TikTok, with several of the fake headlines implying that skeleton brunch was a trend primarily sweeping the platform, and mostly being participated in by teenagers.

Two of the headlines also emphasised the apparently ‘dangerous’ trend, using sensationalist language to imply that teenagers could be at risk of injury if they participated in it. This is likely a tongue-in-cheek reference to the overblown moral panic that has often accompanied media coverage of other dangerous TikTok trends like the Blue Whale Challenge, often accidentally making them seem more popular or widespread than they ever were. 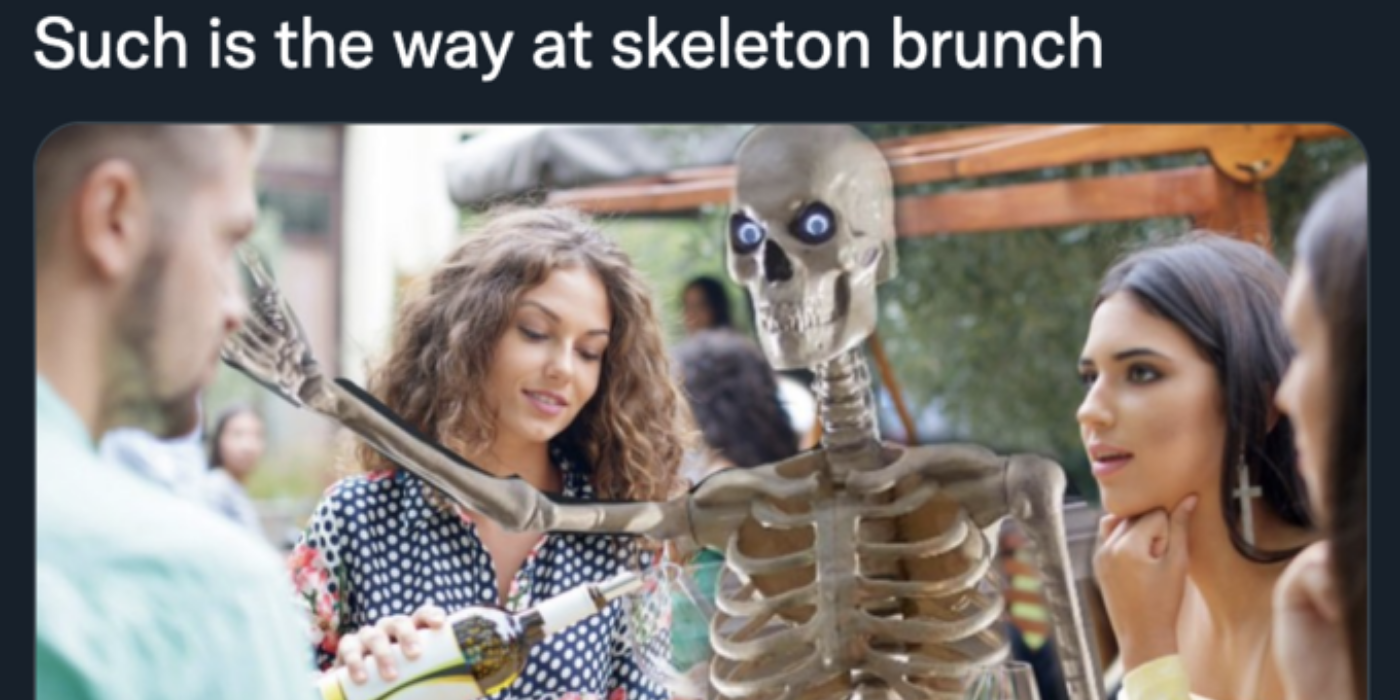 The fake media coverage led to an uptick in joking Twitter content about skeleton brunch, with general text-over-graphic memes being created alongside fake screenshots of celebrities and public figures Direct Messaging about attending. There were also plenty of earnest longing tweets wishing they could actually attend skeleton brunch, an event that did not exist at all and never had beyond the two word meme that had been created just a couple of days before.

Then came two important developments: firstly, a real media outlet named Show Biz Corner reported on the skeleton brunch craze as though it was entirely real, although it is still unclear whether they were deceived by all the memes or just themselves playing along with the joke. This then led to a similar explainer article by The Sun, apparently taking the trend seriously, just as the fake screenshots that had been circulating Twitter had predicted. Secondly, people began tweeting in confusion about why they had yet to see any skeleton brunch content on their FYPs, despite the trend being referenced all over Twitter. 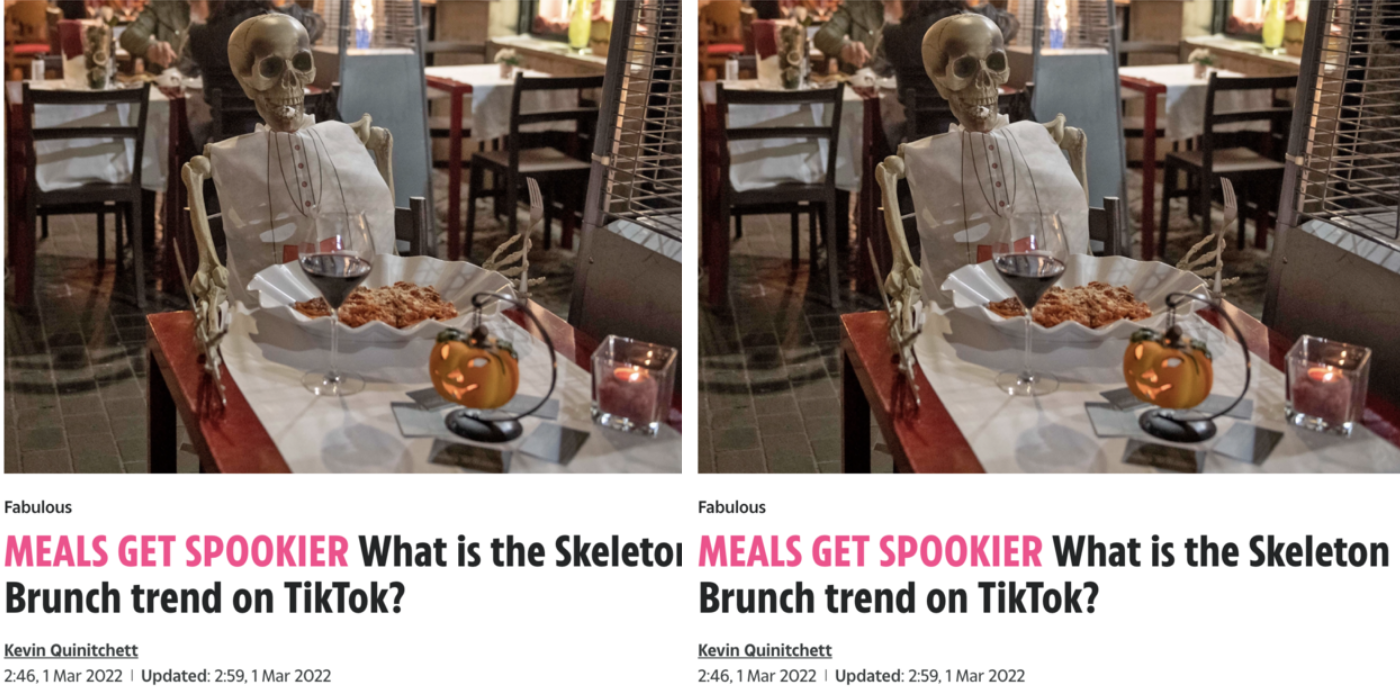 Skeleton brunch is not the first fake TikTok trend to be thought up and collectively brought into existence by Twitter, and it will likely not be the last either. As we’ve already mentioned, Goblin Mode is another two-word phrase rich with the kind of memey energy loved by TikTok teens and former Tumblr users alike, and it similarly began its life on Twitter before disseminating into the wider internet lexicon. As for why Skeleton Brunch caught fire the way it did, its believability lies in its similarity to previous internet crazes, both the TikTok kind and otherwise.

TikTok has always had a predilection for the supernatural, with an early lockdown trend featuring people donning white tablecloths with holes cut for the eyes and classic Chuck Taylor sneakers. They would then take Polaroid pictures or artsy videos of their ghost alter egos participating in aesthetic activities like skateboarding. Even before that, the Skeleton War became a mainstay of Tumblr culture from 2013 onwards, with people captioning images of skeletons doing hilariously mundane things like gardening or having tea parties, “footage from after the Skeleton War”. Like skeleton brunch, the idea of the Skeleton War was first referenced in a tweet, this time by legendary meme-creator @dril.