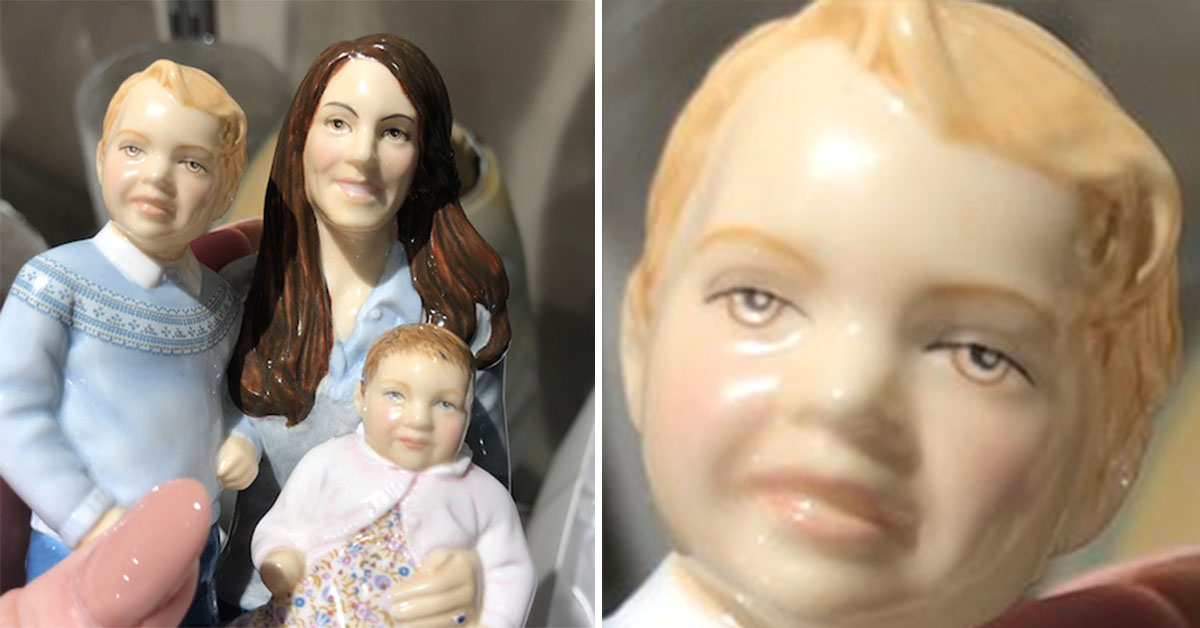 A statuette of Kate Middleton along with two of her children has gone viral online after one unsatisfied consumer tweeted a photo of the figure that not only looks nothing like any of the royals supposedly depicted… but is just downright creepy! Now artistic license is one thing, but this is something else! The statue was priced at a very unreasonable £60 from TK Maxx, and was shown to be made by prominent UK ceramics manufacturing company Royal Doulton.

I can only assume that they are now assembling crack teams of heavy handed individuals to track down and destroy all of these ‘Young Royals’ figures in existence. The British public love a good bit of royalty-themed crockery or ceramic ornaments! However, I imagine that even the most devoted royalist would have trouble placing this piece on their mantlepiece… well, not without experiencing severe nightmares!

And for those of you thinking that it’s not too dissimilar to the real people, then it might be wise to go and get an eye test.

Here is a side-by side comparison for your viewing ‘pleasure’ with the Cambridges’ 2015 family Christmas card that the model is (presumably) based off. Twitter user Cardi BTEC found the item and took to twitter to share the hideous find with the internet, and the internet was both grateful and repulsed!

The caption that accompanied the images simply read, ‘sometimes TK Maxx out-TK Maxxes itself. £60. arguably the worst thing i’ve ever laid eyes upon’. I can’t tell whether it’s little George’s dead psychopathic eyes, Kate’s disarmingly vacant expression, or the fact that baby Charlotte’s face resembles a generic grandmother’s face which has been stretched over a misshapen balloon that I find most creepy about the figure.

It does make you wonder if the person who made this sculpture even looked at the photo that it’s meant to be based on. I’m imagining that the ‘artist’ upon being asked if he wanted a copy of the christmas card to work off, simply replied, ‘I’ve seen it once I think, they’re wearing blue-ish stuff aren’t they? Aye I’ll nail it don’t worry!’ I mean come on, the lizard-eque hungry eyes on this child aren’t even straight!

As you can probably imagine, the internet had quite a few of its own qualms with the figurines, with responses including the following:

‘Why does Charlotte look like a 70 year old complete with make up??’

‘There are definitely souls trapped in those figurines.’

And quite simply, ‘I’m upset.’

Not everyone, however, is as disturbed by the sweaty looking ceramic human people. In fact, there are even people who love the ‘Young Royals’ figurine as the customer reviews on Amazon attest to!

The product somehow has a 5 star rating! Also, it has such lovely feedback as, ‘Figurine was just as I expected, beautiful’ from Deborah Brown.

One person even praised the faces on the statue for being excellent:

‘Wonderful figurine! Great colors, firing was good. Doulton doesn’t always have the best faces, but these are very very good.’ Another reviewer, simply going by the name ‘Barb’ recounted how she overcame her initial trepidation regarding the product, and now loves it!

Barb… you’re telling me, in all seriousness, that the only thing wrong with this is George’s hair?! Also, it’s not parted on the wrong side? You’ve somehow isolated potentially the only thing that this ceramic headache gets right! The fact that anyone would pay good money to have this on display in their home is baffling to me. I think I’d rather stare at the sun itself over the cold unfeeling murderous eyes of these figures!

Will you be popping one of these figures in your Amazon order? Let me know what you make of these creepy statues in the comments below, and be sure to tag any royal fans who you think would really appreciate this gift!