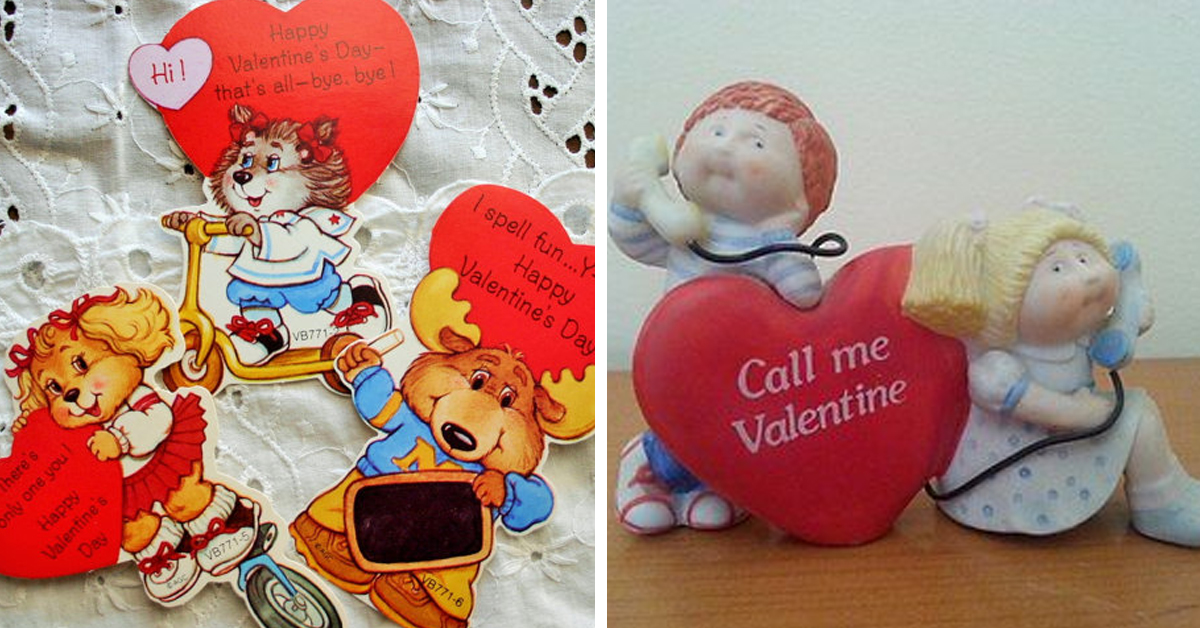 Before you get started, we recently launched a Facebook Group for our hardcore 80s fans. Join it here

So it’s just turned February, which means that most people have already given up on their New Year’s Resolutions, the pressure is off slightly as people breathe a sigh of relief as they’ve just had their first paypacket since Christmas, and then the fear sets in again as you realise that means it’s now less than a fortnight before the next expense….

So it’s time to get thinking about a gift, and more importantly picking the right card for your loved one! But which to choose? We were faced with the same crisis when we were at school and wanted to send a valentine’s card to the girl or boy we had a secret crush on, but back then the choices available were very different! Did you go for something a bit generic and sickly sweet? Not everything was branded and there’s nothing like pushing the boat out by spending 49p on a budget Valentine’s card for your first crush – how to make a proper impression! Or one that looked like a proper branded card but was a budget model from what is probably a program no-one recognises or doesn’t even exist! Looks like He-Man and She-ra after a budget clothes shop! Aww – I spell fun Y-O-U! Did you get or give one of these sickly sweet animal character Valentine’s cards? Now you’re talking – everyone loved the Jetsons and at least this series had a good choice to pick from so you could get your Valentine a card with their favourite character from the show! There was a range of DC character Valentine’s cards released. Did you go for a nice Batgirl character card? Or full-on creepy with the Joker threatening with a bomb, nothing odd about that, right? Just a nice, loving Valentine’s card, surely? I’m guessing this one was for if the first card didn’t work and they rejected your advances or were simply too creeped out by the Joker card you sent! Maybe next year indeed… Now this is proper 80s Valentine’s – Teenage Mutant Hero Turtles were everywhere! You couldn’t put the TV on without seeing an advert for them or their merchandise at one point so it’s no surprise they had a range of Valentine’s cards, I’m just surprised it’s not asking if they want to join you for a pizza! Another firm favourite of the time, Garfield was the lovable cat with the gloomy outlook on life that couldn’t stop you from loving him! Or maybe you were a Roger Rabbit fan, so nothing more normal than sending your Valentine’s a card with a picture of a baby on it!

It wasn’t all about cards though, maybe you bought your Valentine’s a little gift to go with their card? Did you give or receive any of these? Garfield Soft toys – there were so many of these to choose from, they were the Me To You Bears of their day! Or a Garfield figure, again there were a wide range to choose from! I’m not sure giving this would have the right effect but some people loved the Cabbage Patch Kids! Or a California Raisin maybe? How else can you say Happy Valentine’s you Old Prune and get away with it?

So what memories do you have from Valentine’s in your formative years? Who was the first person you ever gave a Valentine’s card to? What cards and gifts do you remember from the time? Let us know in the comments!