The 10 best TikTok communities you never even knew existed 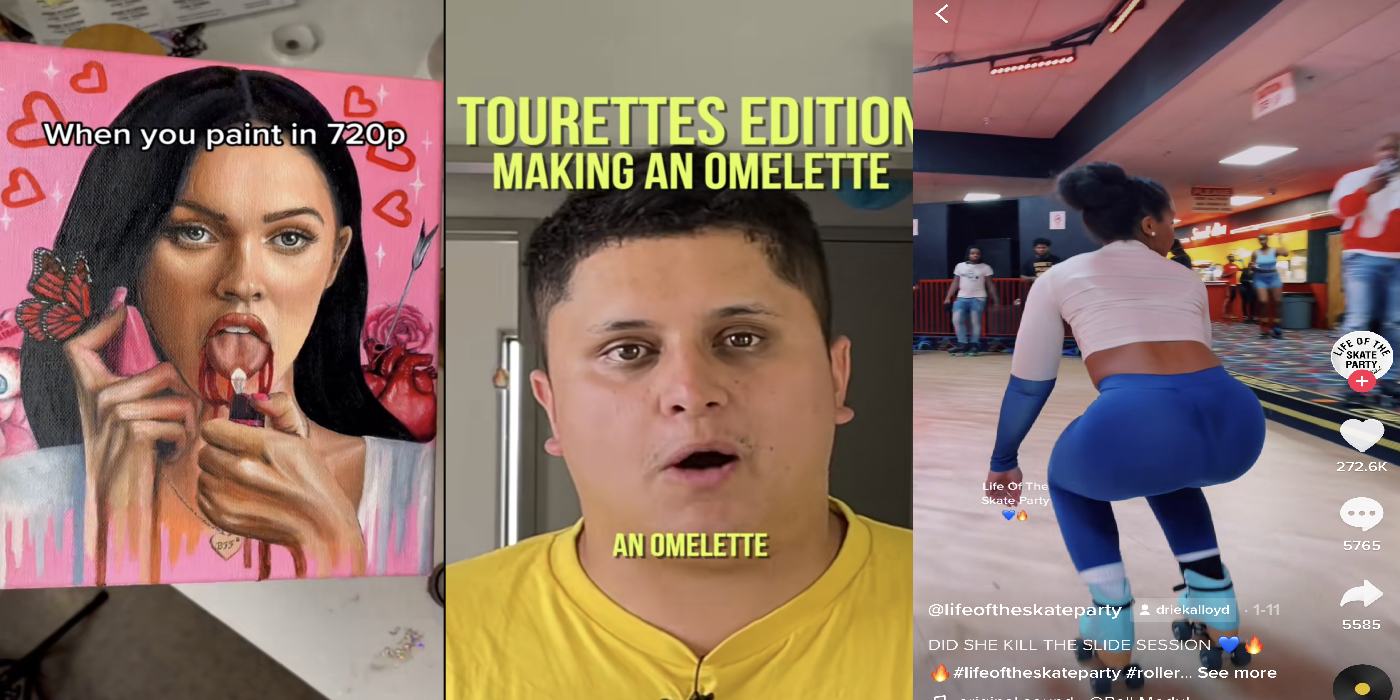 Outsiders to the app may find the idea of a ‘TikTok community’ bizarre. Isn’t it just a bunch of 14-year-olds dancing? People who don’t know what POV means? How low is the bar for the term ‘community’ if this can stand for one?

In reality, TikTok plays host to burgeoning communities you might not even have known exist, with everything from the wiccan to the wacky being delivered in short-video format.

TikTok has thousands of legitimate, multi-layered and extremely popular communities and sub-cultures. These include BookTok, MoneyTok, WitchTok and CottageCore.

Given how tightly-targeted the average TikTok session can be, with users only seeing what the app thinks they want to see, many of these communities have only been experienced by the people in them. Want to learn more about these particular corners of the digital age? Here’s the scoop on ten in more detail. 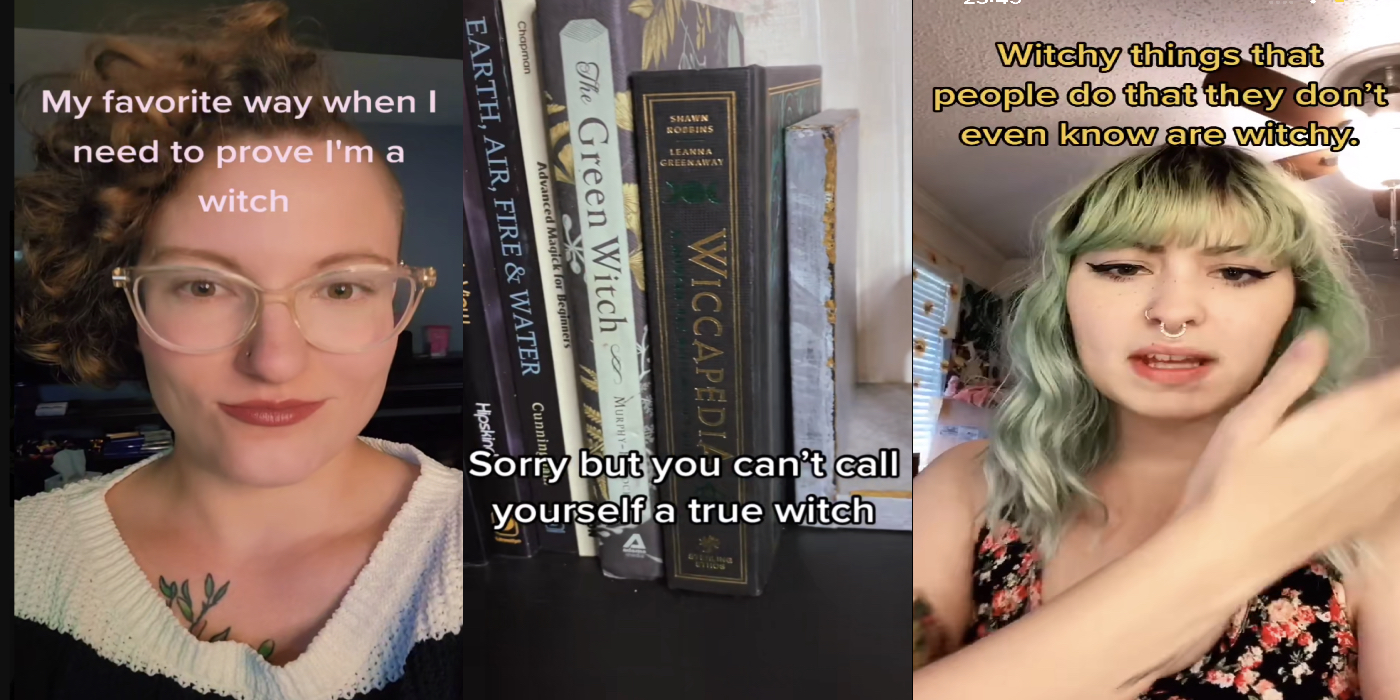 Okay, you might have heard about WitchTok. When the videos on the hashtag have a combined 24.7 billion views, it’s hard to call this niche. But just because you’ve heard about doesn’t mean you may necessarily understand it. Across these videos, you’re likely to see tarot card readings, crystal reviews and spell chants – although, alongside all the pageantry we’ve come to know and love about witchcraft, it’s not all potions and broomsticks. The community also embraces those inclined to wellness and spirituality. Those who are just trying to better themselves by certain ritualistic means.

Historically, witchcraft has been an unpopular and secret practice, so to see it thrive as much as it has, connecting millions of like-minded people the world over who would never come across each other were it not for TikTok (if not social media at large) is a special thing. 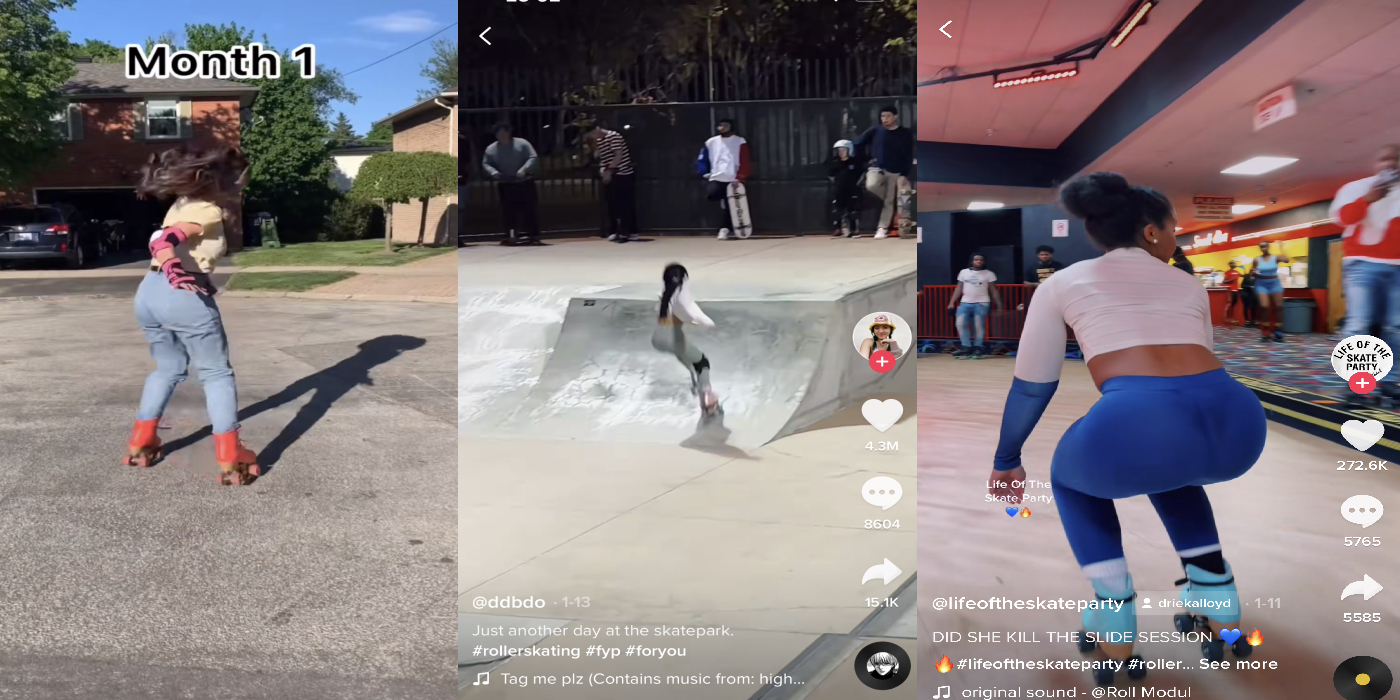 2020’s lockdown saw the rise of many things: sourdough, the digitised pub quiz, clapping. Over on TikTok, however, there was something else tweaking the interests of the general public – roller skating. 7 billion views have been notched up on #Rollerskating and understandably so. To browse this hashtag is to vibe to an endless feed of aesthetic glory, whether it be the fashion, the music or humans doing backflips on wheels.

But why? Escapism, nostalgia, whatever you want to call it, has a huge grasp on Gen Z. Yes, watching footage from the 1970s can look great, but it also serves as the ultimate distraction from current dread and uncertainty. And if that doesn’t make you wanna get your skates on, what could? This is one to get involved with if you already haven’t. 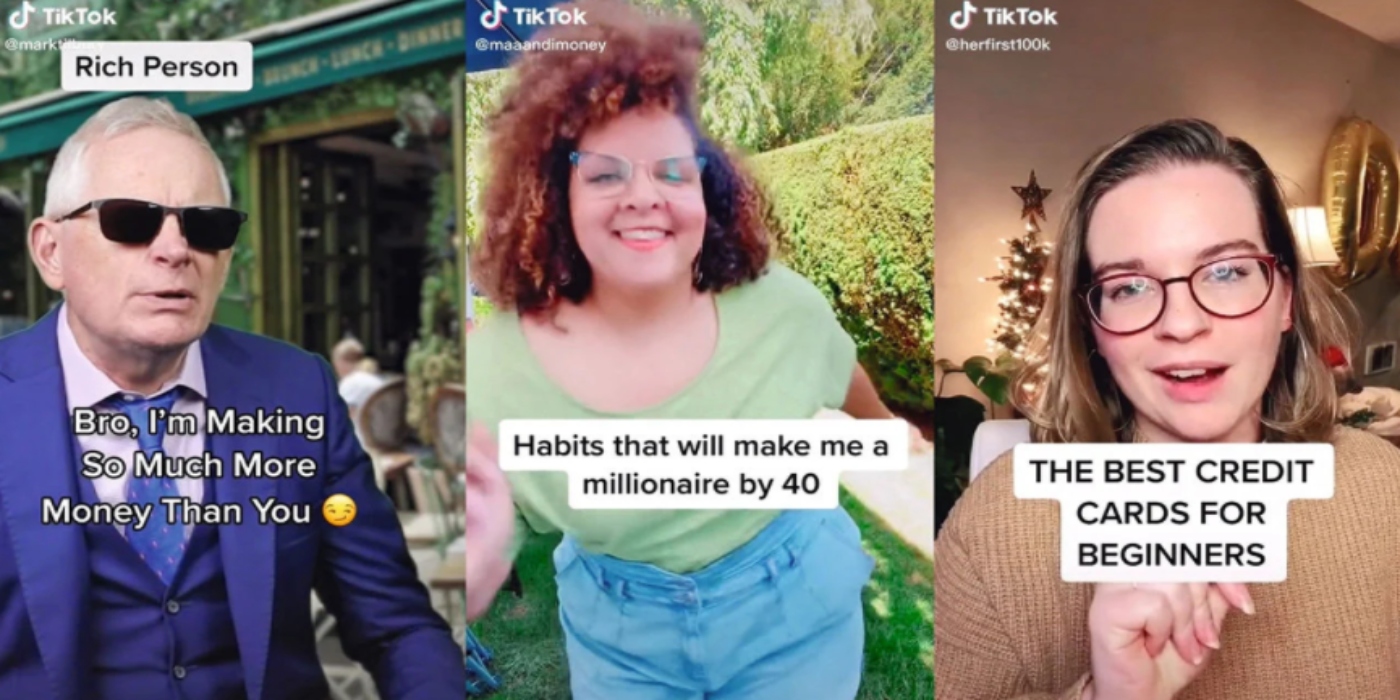 This one’s a little less fun and more pragmatic. The stark truth of it is that Gen Z – who are set make up 30% of the workforce by 2030 – have come of age during several financial crashes and a pandemic. The fabled “best years of their lives” have been marred by arguably a lot more bad luck than previous generations. As a result, there’s a growing community around personal finance.

#MoneyTok boasts 11.5 billion views. Captions on these videos will be along the lines of ‘The best credit cards for beginners’, ‘Habits that will make me a millionaire by 40’, and ‘Which tax software to use this year.’ Now, don’t turn your nose up – TikTok traders doubled meme cryptocurrency Dogecoin’s value in 2020. According to a recent Nielsen study, around 54% of Gen Z indicated they wanted to start their own company. They said having control, being debt-free, and living a purposeful life were amongst the driving forces for this ambition. 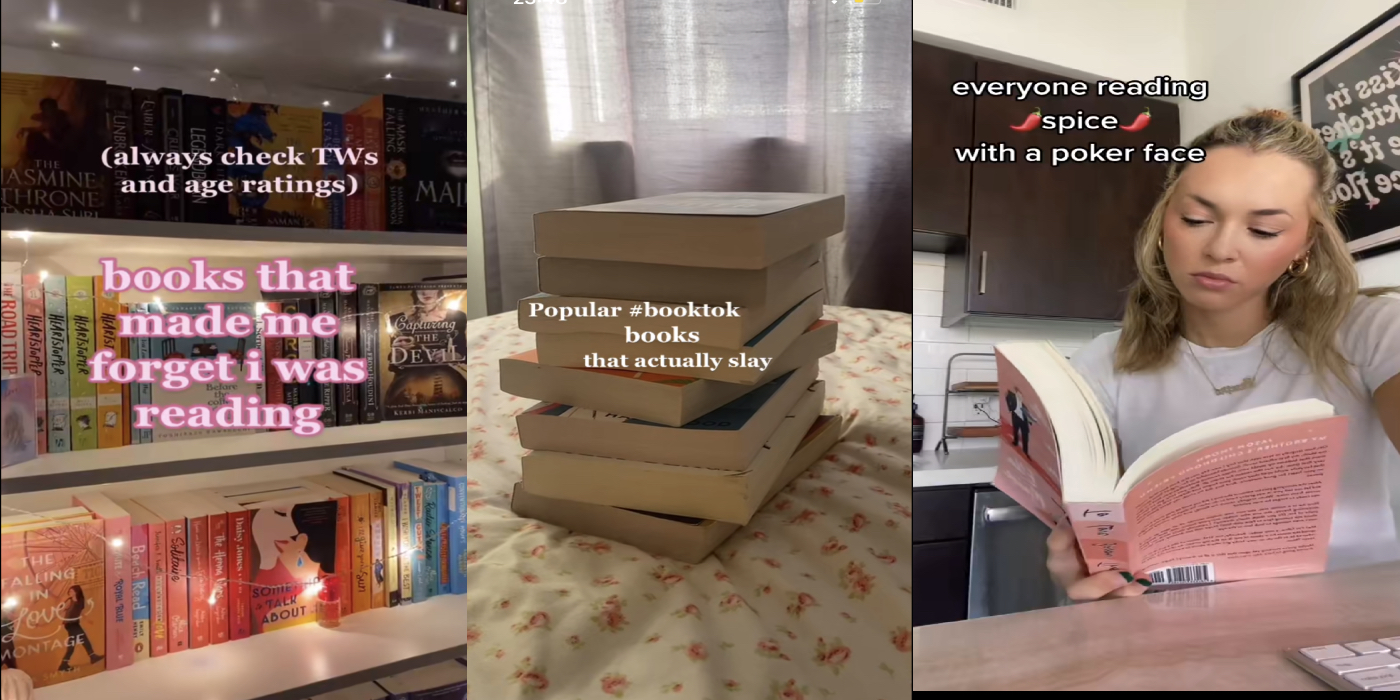 It’s a common criticism of young people, that with all their quick-fix technology, they no longer care for the humble old paperback. Those assumptions, you’ll be pleased to hear, are evidently untrue. TikTok’s #BookTok at the time of writing has a whopping 43.8 billion views. 43.8 billion! The population of earth is 7.7 billion.

Yep, Gen Z has sparked a revolution across the app with book recommendations, dramatic readings and general lobbying for literature. Such is the power of #BookTok, that previously published novels are becoming bestsellers, like Adam Silvera’s They Both Die At The End. From the beginning of 2021, the hashtag has seen a 39.4% increase in engagement and a 4568% increase in the number of videos created since July 2020. Publishers are now considering TikTok a serious platform to market future titles on. If you’re looking for a community to join, you’re not likely to find a more welcoming one.

6. #CottageCore and the sustainability community 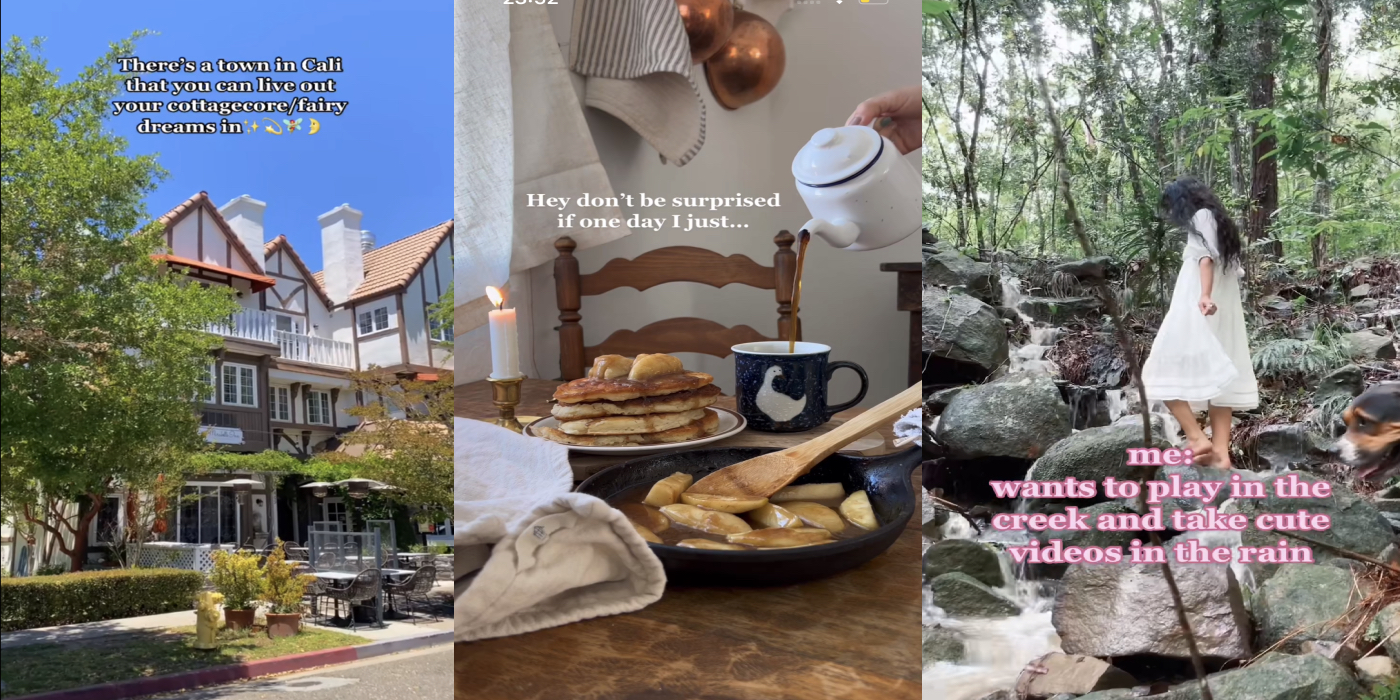 The sustainable living lifestyle is rapidly becoming less of a fringe movement and more mainstream. Nowhere is that more evident than on TikTok. The #CottageCore hashtag alone has 9.2 billion views, and to create content around environmental issues is to engage with giant numbers of users and communities.

With TikTok lauding itself as a platform where users can find more information than they would on traditional media outlets, it has been at the forefront of Gen Z’s conversation around the climate crisis, a phenomenon they’ve been born into. #CottageCore taps into this desire to leave behind the congested, expensive and often damaging city life and lap up the fruits of the wholesome, naturally-occurring countryside. Paramount to this community is DIY, upcycling and sustainability, which has led to a 900% increase in searches for the term on Depop. On top of that, we’re also seen an astounding 22.71% engagement rate on cottagecore-related content – 58.7% higher than the 14.3% average engagement rate on TikTok. 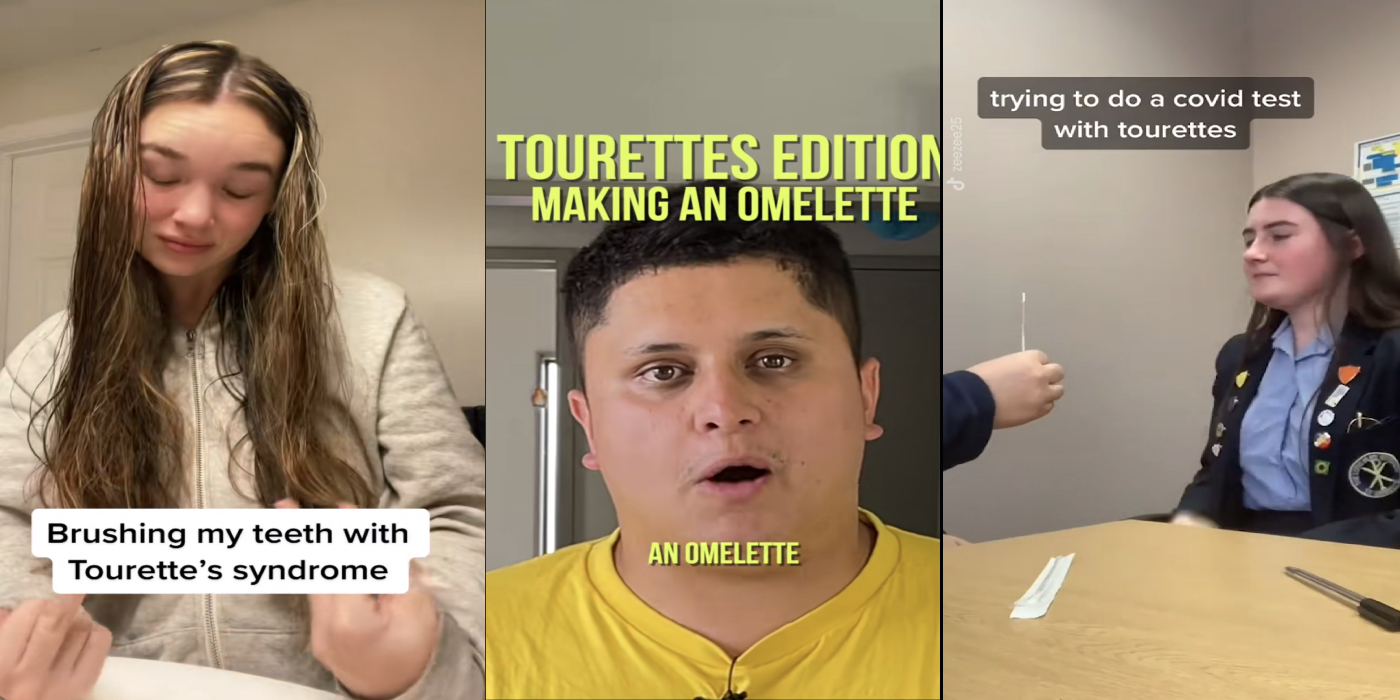 Zara Beth, or @zeezee25, is a 16-year-old Tourette syndrome advocate with 1.8 million fans who went viral after a video of her attempting to take a COVID-19 test generated 83.4 million views, 14.5 million likes, 127,000 comments and about 708,000 shares. Since then, Zara has uploaded many videos detailing what it’s like to deal with Tourette’s in normal, everyday scenarios. 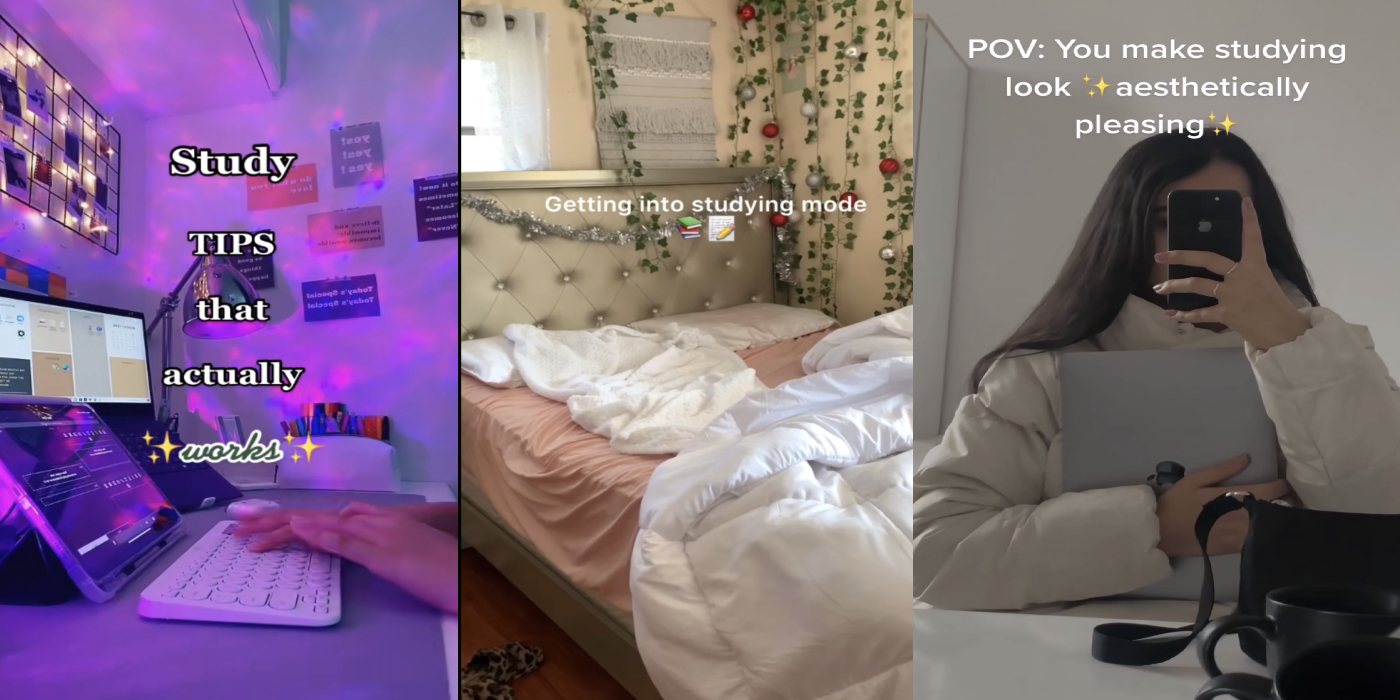 Another community hit is the #Studywithme hashtag which is fast approaching 3 billion views. Study With Me capitalises on another common malaise among Gen Z: loneliness. Users are encouraged to watch others - or film themselves - studying, whether that be at home or in the library. The background music can be lo-fi or classical. There might not be any music at all, opting instead for the ASMR triggers of pages being turned or pens scraping across paper.

At a time of sensory overload and isolation, #studywithme functions as a kind of free therapy. Not only does it encourage users to stop scrolling for a few minutes (if not hours) but it provides them with a source of companionship. Recent Harvard research found that 61% of people aged 18 to 25 reported high levels of feeling lonely “frequently” or “almost all the time or all the time.” One creator to follow from this community is @medical_kat, a Dublin-based medical student with a Discord, TikTok, Instagram and YouTube channel. In this content, she shares tips and resources for students, motivating followers week-in week-out. With almost 430,000 fans and 6.7 million likes, her influence has spread far and wide. 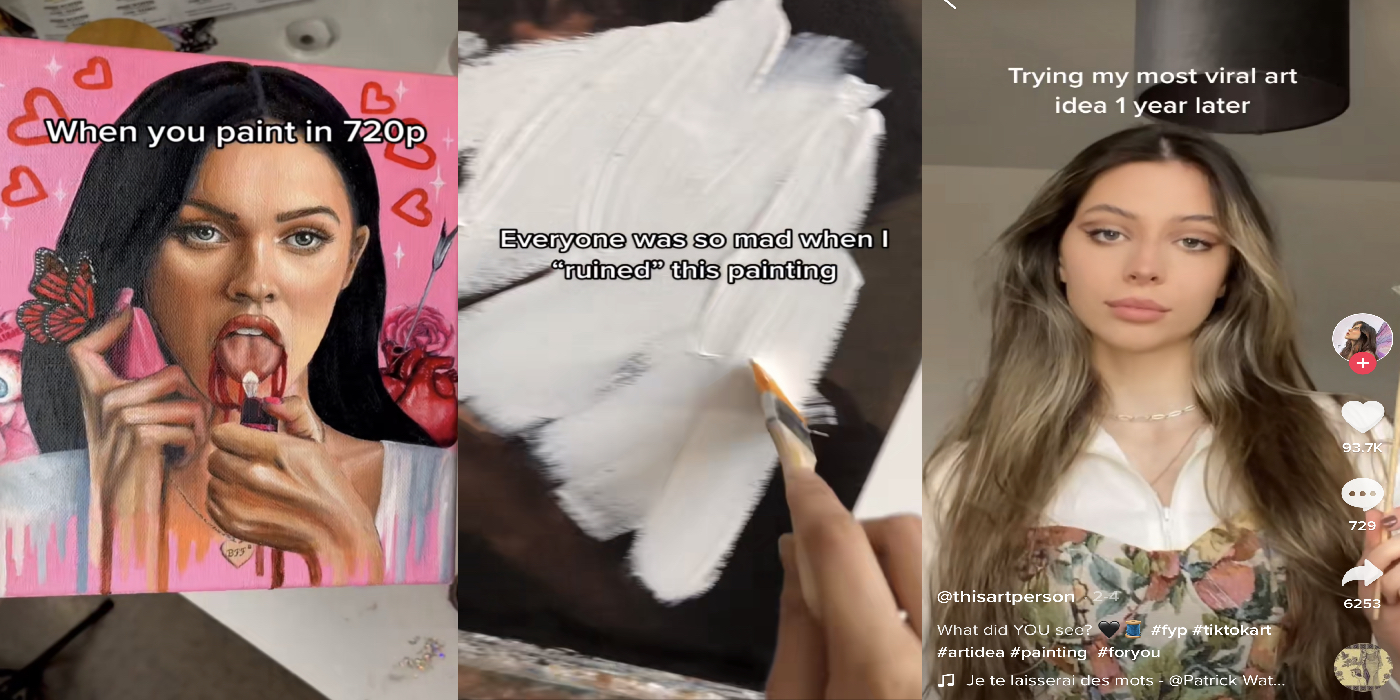 Much like #BookTok, it makes sense that art also commands a sprawling audience on TikTok. The benefits of showcasing new art to an unlimited number of people in 60-second snippets or longer, has proved popular with artists and art collectors alike. Some artists have even made TikTok their main source of income and exposure.

Matt Chessco has created a new way of unveiling art by means of music. In one video, Chessco mime-taps his paintbrushes on a canvas to a cover of Crazy Train, with each section of an Elon Musk portrait revealing itself on every beat. Off the back of this success, he began selling paintings for $2,000 a pop. Fellow artists eventually copied his performances, painting style and even music choices. Another visual artist, Ben Labuzzetta, or @artboy200, received 29 million views of his videos memorialising Kobe and Gianna Bryant after their fatal crash. Around 10,000 people flooded his inbox in one day and ultimately, he chose to stick with TikTok at the expense of admission to the University of Wisconsin, Madison. Ben has since earned a steady income and several collaboration opportunities in the last year. 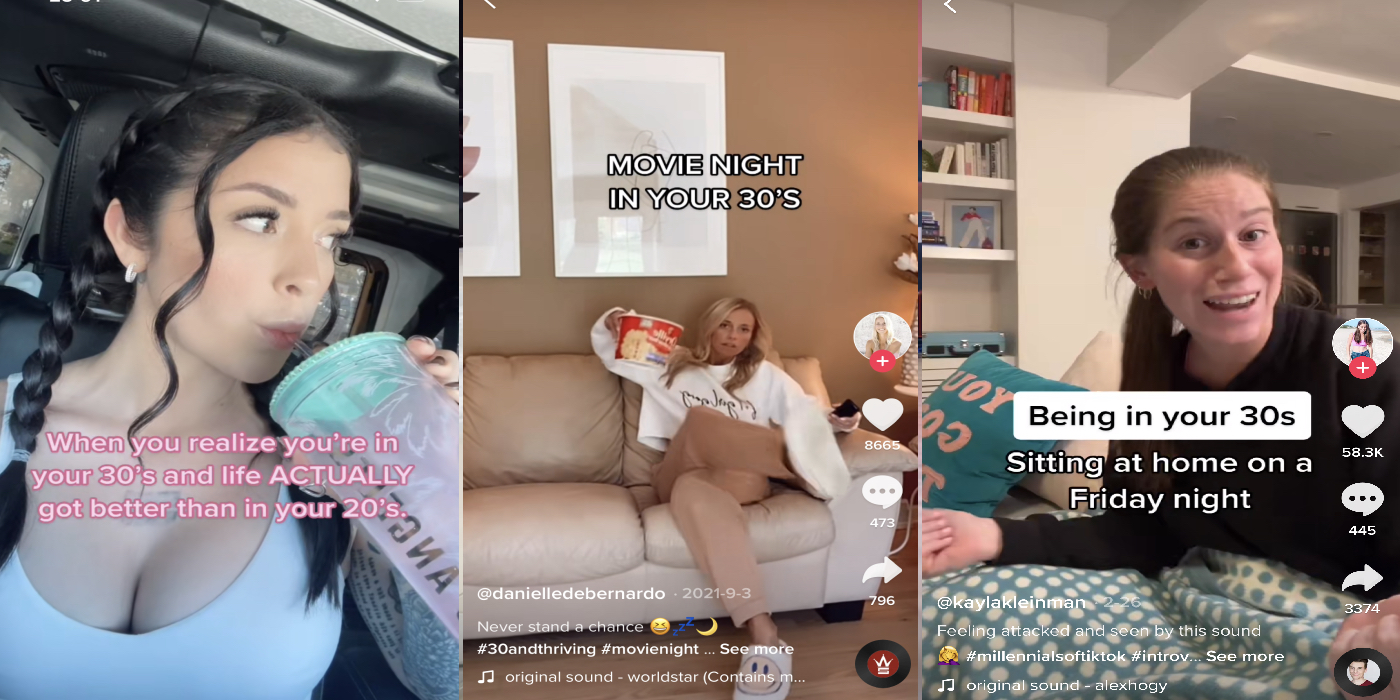 Being a TikTok user in your 30s can be a strange feeling. You’re not officially old but seeing actual children creating content can leave you feeling out of the loop. Like you’re not wanted. Enter #30somethingoftiktok. 60 percent of TikTok users are Gen Zers, but that’s not to discount those in their thirties who are enamoured with the app. According to App Ape data via Statista, women in the US aged 30 to 39 are the second largest group of monthly active TikTok users and represent about 14% of the app’s user base on Android devices. They also happen to be the highest spending generation, with $1.4 trillion in disposable income in 2020.

#30somethingoftiktok hashtag boasts 13.8 million views while #30stiktok has 7.1 million. The hashtags #tiktokinyour30s and #over30stiktok are up there too. Chelsea Aberkane, AKA @borealis_beauty, has earned over 15,000 followers and more than 50,000 likes through mainly beauty-focused content, but is partial to the odd inspirational video. Yoko Okumura, is a thirty-something director, writer, performer, and the face behind @directoryoko. She creates videos for over 17,000 followers and has earned almost 290,000 likes. Yoko discusses her job, new hobbies, film and how to be comfortable with age, inspiring millions like her on the app. 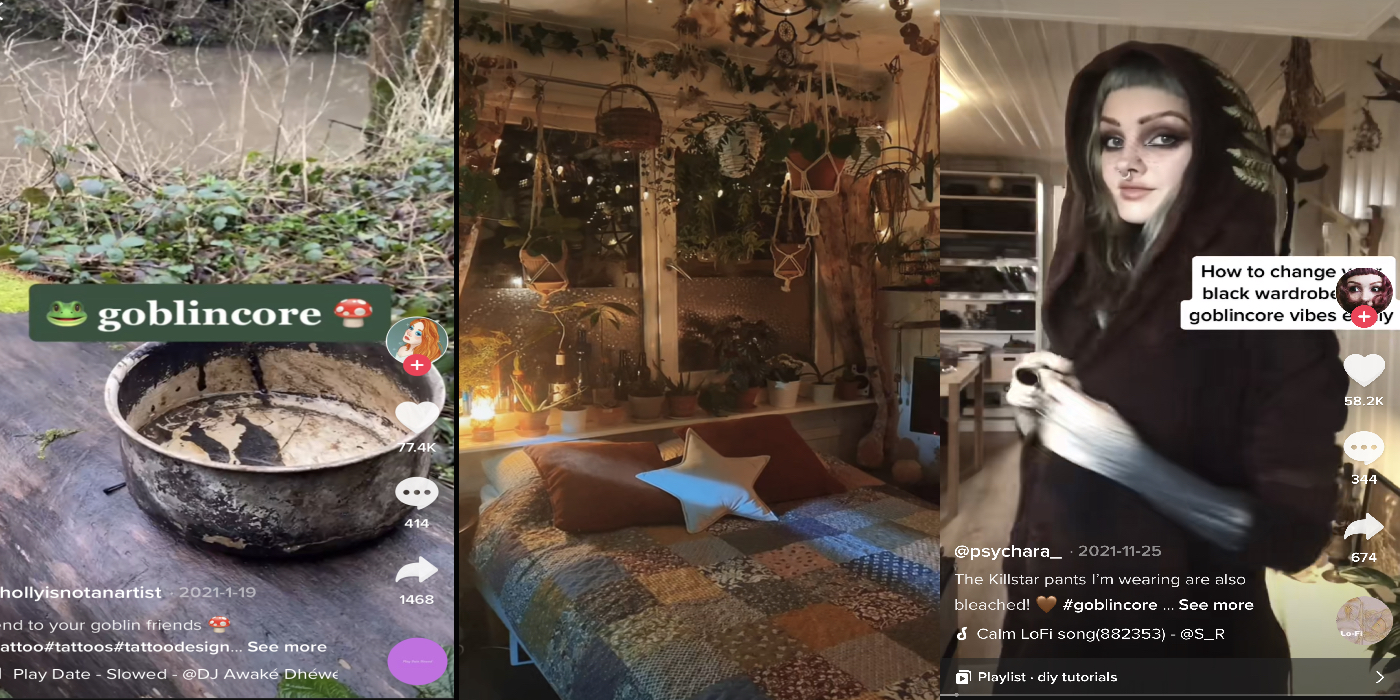 Goblincore, AKA Goth’s answer to CottageCore. On this hashtag, you’re likely to see the slimer, squidgier side of the countryside celebrated. Snails, moss, spiders, mushrooms. In an age of keeping up perfect, unattainable appearances, #Goblincore embraces reality and all its sweaty and messy imperfection.

Trends expert Sabrina Faramarzi claims, “Goblincore is cottagecore for those that actually spend time in nature [who] know that nature is not sunlit wheat fields but gnarly forests and chaotic animals. Often referred to as dark cottagecore, the aesthetic also picks up some of the occult. After long lockdowns, perhaps spending lots of money collecting and surrounding ourselves with a bunch of things we don’t need, wearing loose, neutral clothing and taking lots of walks, I think we all feel a little bit like goblins right now.”