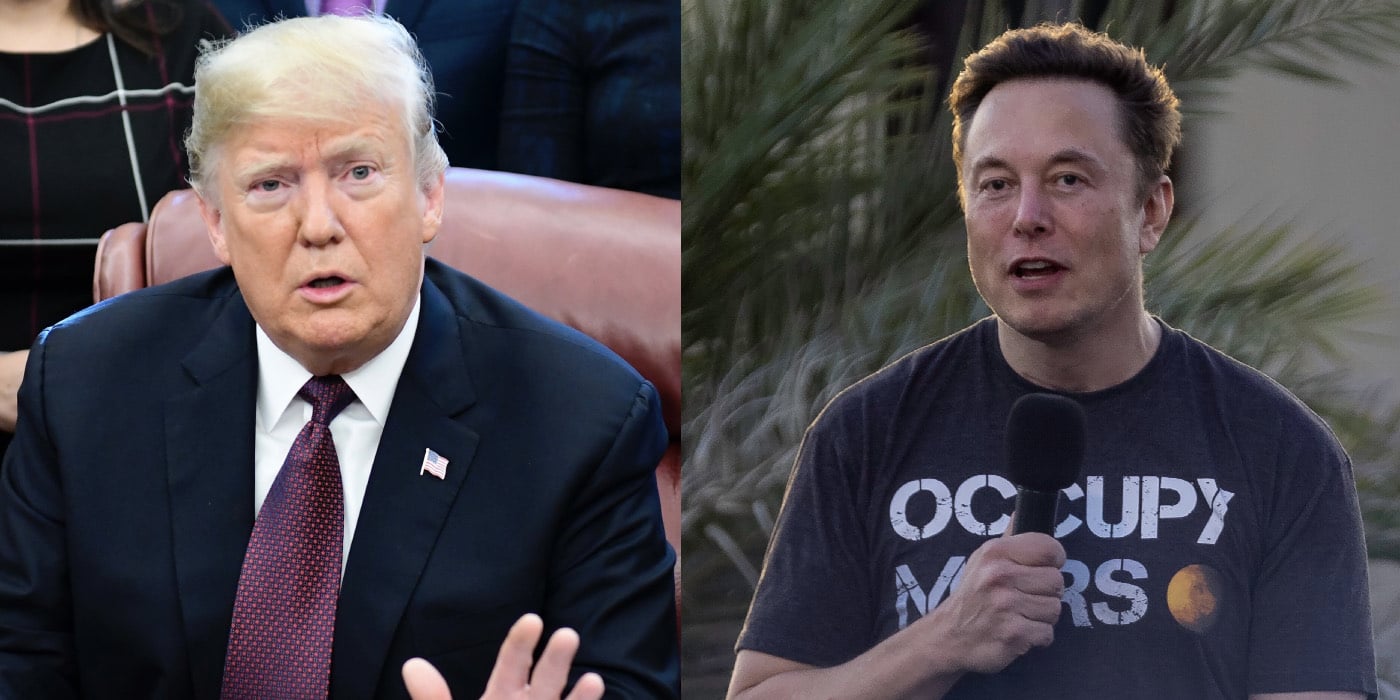 Twitter and controversy go hand in hand. With the exception of Facebook, there is no other platform that comes under so much scrutiny when it comes to free speech, how far it can go, and who is allowed to say what.

In the past decade, Twitter has made several headlines thanks to its controversial content. Some of these include Weinergate and the cancellation of Roseanne Barr’s show following allegedly racist tweets. Most famous of all, was the permanent ban of Donald Trump while he was still president. Here are a few other controversies you may have forgotten about. 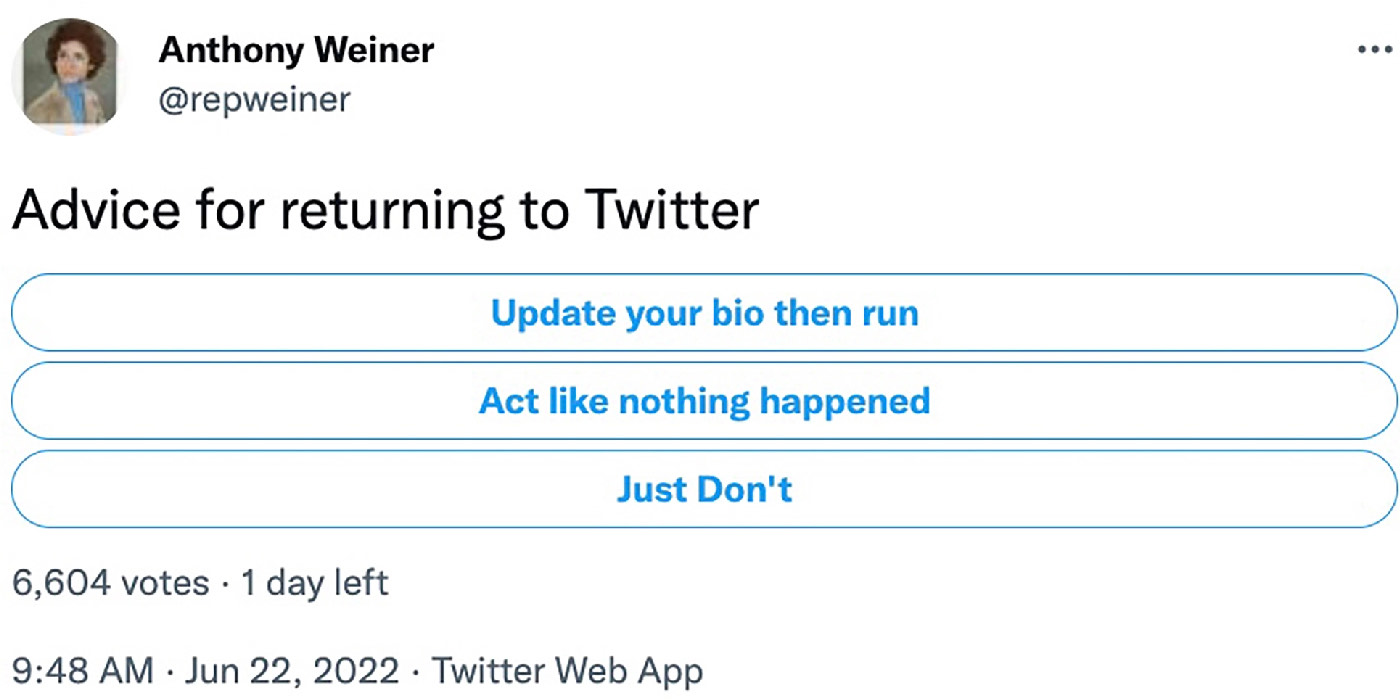 “Weinergate” came at a time when Twitter was fairly green and not frequented by that many legitimate types such as politicians and figureheads. It was back in May 2011 that Anthony Weiner, the former New York Democratic Representative, tweeted a picture of a erection concealed by a pair of grey boxer briefs.

The tweet was meant for the eyes of a journalism student at a Washington State community college, who in the wake of Weinergate, deleted all of her social media accounts.

That same June, Weiner publicly admitted to tweeting the photo at a Manhattan press conference, claiming to have sent the photo via direct message “as a joke”. On top of this scandal, he also admitted to engaging in lewd conversations with other women he’d met over social media and that this suggestive photo wasn’t the only one he’d sent.

Then on June 16, 2011, Weiner formally announced he would be resigning from Congress, before stepping down from the office. Saying off Twitter forever proved too hard to Weiner, who made a surprise return to the platform in 2022 to promote his radio show. In a self-effacing poll, he asked his followers whether he should, “Update your bio then run”, “Act like nothing happened” or “Just don’t”. 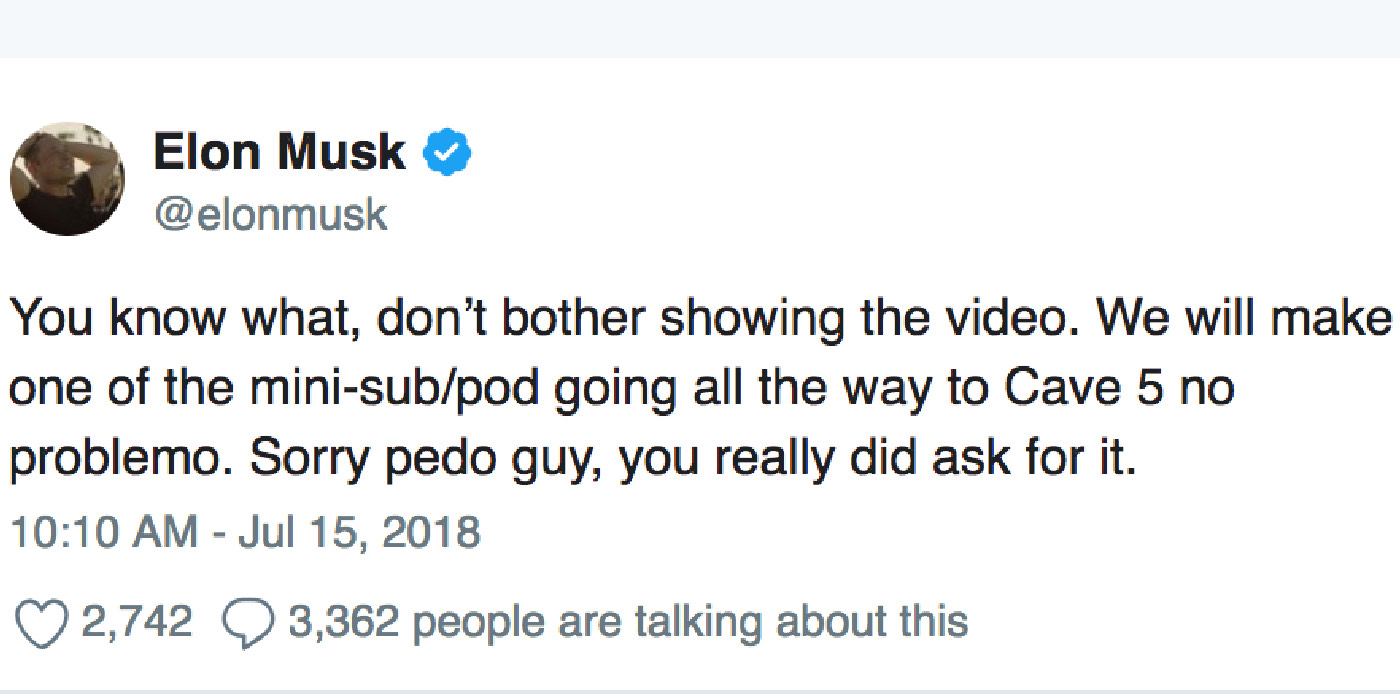 The world was on tenterhooks in June 2018 after a devastating flood left a young football team of 12 and their coach trapped in a Thailand cave. Along the way, the rescue mission was struck by further tragedy, with one Thai Navy Seal dying during attempts to save the children. There were even reports that monsoon rains could come along and worsen the flooding.

Then, just as everyone was hoping, Elon Musk announced on Twitter that he would intervene to get the job done. Musk, unprompted we should add, ordered his engineers to design a submarine the size of a child, only to miss out on the crucial moment. Over by the actual cave, a team of rescue divers were in the process of saving the entrapped team.

One of the divers, Vernon Unsworth, was interviewed by CNN in which he called Musk’s efforts to build a child-size submarine a “PR stunt” and that he “could stick his submarine where it hurts.” Musk replied, saying: “Sorry pedo guy, you really did ask for it.” The Tesla giant has since dismissed the tweet as a heat of the moment rant.

At the time, and in the deposition, Musk claimed “pedo guy” was a common insult in his native South Africa. That it means creepy not only in South Africa but across the world. “This is quite common on the internet,” Musk said. “If you Googled it now, that’s what it would show.” Rest assured, Musk abandoned any notions of miniature submarines and focused on very large rockets designed to travel space. Pray that no child gets trapped in the moon.

Roseanne Barr and The Planet of the Apes 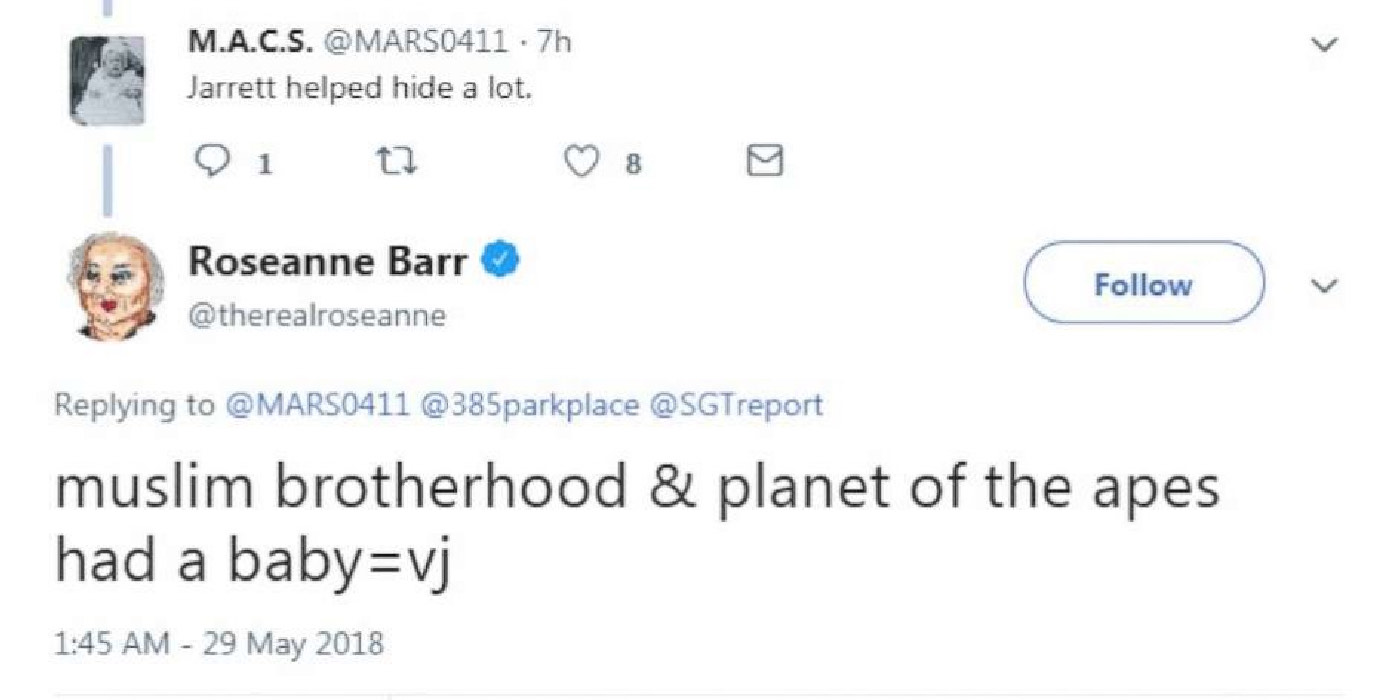 Roseanne Barr, the American comedian and actress who shot to fame with her eponymous sitocom Roseanne in the 1990s, was known to be a Twitter troublemaker. But it was when she tweeted about former advisor to Barack Obama, Valrie Jarrett, when it really hit the fan.

“Muslim brotherhood & planet of the apes had a baby=vj,” Barr wrote, replying to a tweet which accused Jarrett of helping to cover up alleged wrongdoings of the Obama administration. In response to the backlash claiming the post was racist, Barr then said: “Muslims r NOT a race.” She stated that her tweet was “a joke” before issuing a longer apology post saying. “I apologize to Valerie Jarrett and to all Americans. I am truly sorry for making a bad joke about her politics and her looks. I should have known better. Forgive me-my joke was in bad taste.”

Barr stated she watched documentaries such as Malcolm X: An Overwhelming Influence on the Black Power Movement. She also wrote of the physical toll the row that taken on her.

“I have developed a bit of palsy in my head and hands due to the stress I have lived thru,” she said. “I sleep a lot now-without ambien too, thank G0D!! goodnight-we are winning! don’t give up! PEACE is coming!” 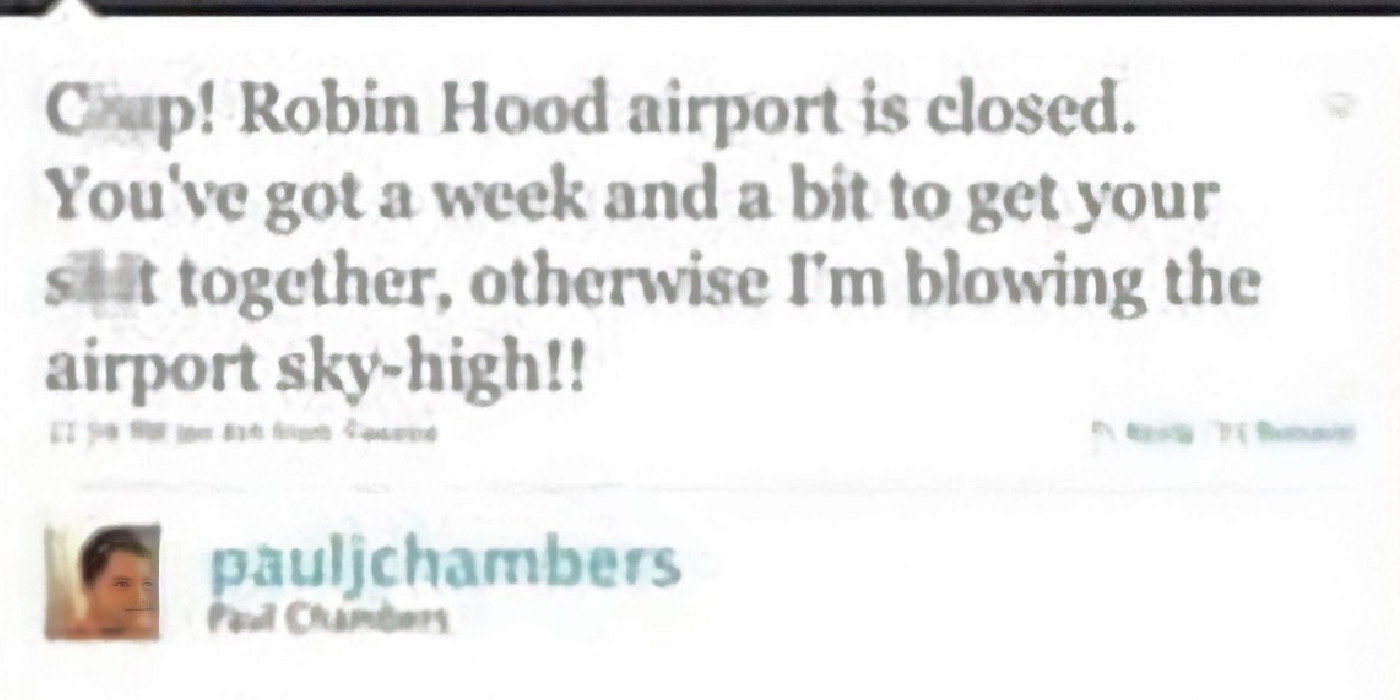 When Paul Chambers arrived at Robin Hood airport in South Yorkshire in January 2010 to find it was closed due to heavy snowfall, he was fuming. Hoping to fly to Belfast meet a girl he had met on Twitter, he wrote: “Crap! Robin Hood airport is closed. You’ve got a week and a bit to get your shit together otherwise I’m blowing the airport sky high!!”

A week later, four officers from South Yorkshire police arrested Chambers at his office at a car distribution firm. He subsequently lost his job and prosecuted under section 127(1) of the Communications Act 2003, which prohibits sending “by means of a public electronic communications network a message or other matter that is grossly offensive or of an indecent, obscene or menacing character”. In May 2010, Chambers was convicted at Doncaster magistrates court and fined £1,000, though he later won a high court challenge against the conviction. 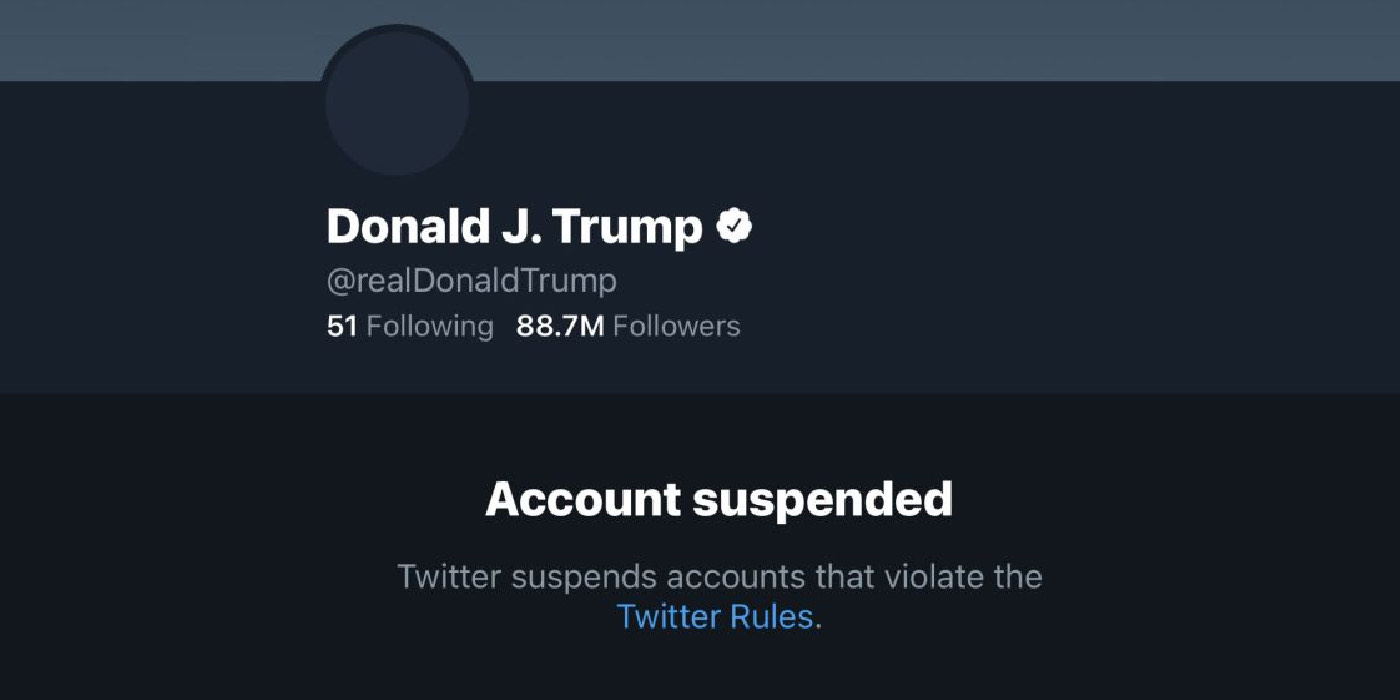 Perhaps the most controversial thing to happen on Twitter in the past decade, was the decision to permanently suspend the then-president of the United States, Donald Trump. The Donald, who had been tweeting a tirade of misinformation regarding what he believed to be election fraud following his defeat to Joe Biden, was originally locked out of his account for 12 hours after calling the rioters who stormed the Us Capitol in January 2021 “patriots.”

Twitter warned Trump about a permanent ban if he were to breach the platform’s rules again, which he did of course. In one of two final straw tweets, he wrote: “The 75,000,000 great American Patriots who voted for me, AMERICA FIRST, and MAKE AMERICA GREAT AGAIN, will have a GIANT VOICE long into the future. They will not be disrespected or treated unfairly in any way, shape or form!!!” Twitter described it as “further indication that President Trump does not plan to facilitate an ‘orderly transition'”. In the second tweet, Trump said: “To all of those who have asked, I will not be going to the Inauguration on January 20th.”

Twitter stated both of these tweets were “in violation of the Glorification of Violence Policy” and permanently banned the president on January 9, 2021, eleven days before he’d be replaced by president-elect Joe Biden. The reaction was understandable on both sides of the political spectrum. Left-leaning liberal types were overjoyed. Conservatives were less happy, viewing it as clamping down on free speech.

Donald Trump, a keen social media user, subsequently launched his own app called Truth Social that would hope to become a right wing rival to the apparently liberal likes of Twitter and Facebook. It marked the beginnings of his potential 2024 campaign to return to the White House. Although Truth Social topped the mobile downloads ranking for Apple’s App Store in the US, the app would later face ridicule for its technical problems. 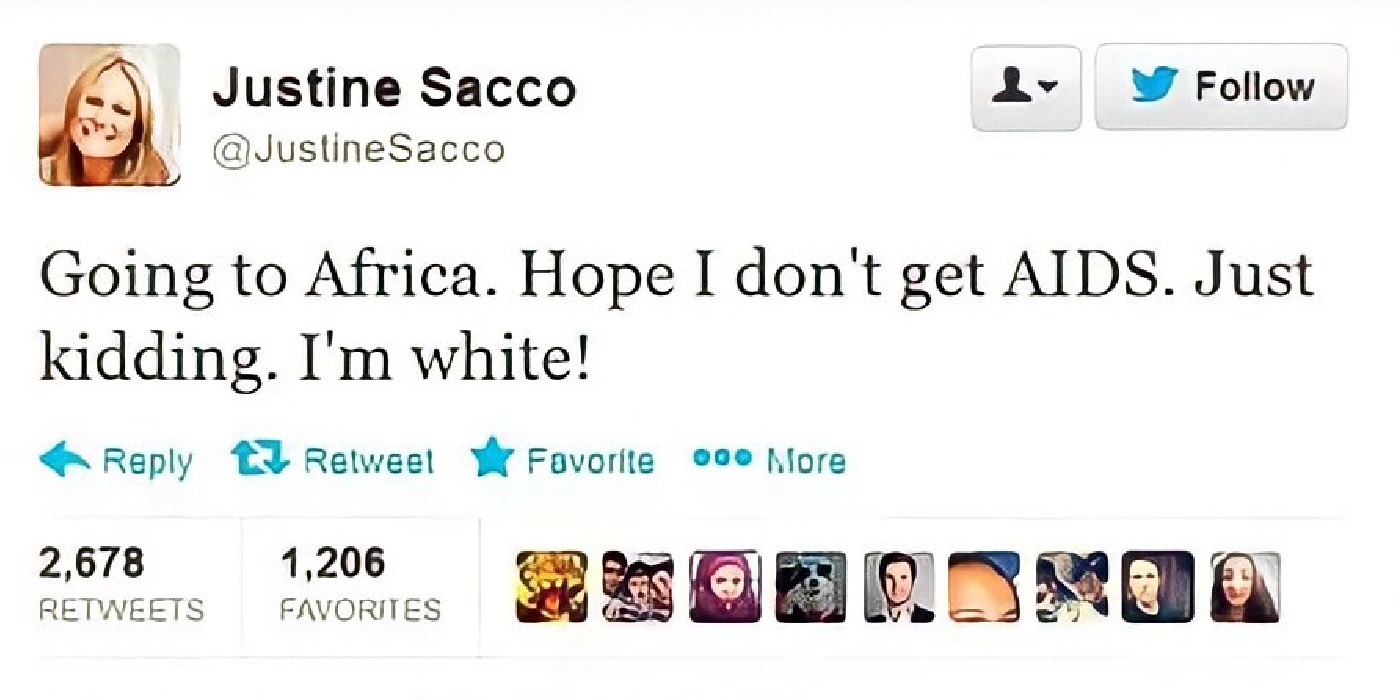 Prior to boarding a flight to South Africa in 2015, Justin Sacco posted a throwaway tweet that would change the course of her life: “Going to Africa. Hope I don’t get AIDS. Just kidding. I’m white!” Sacco, clueless in the clouds, was subject to huge controversy and backlash for her post, with thousands of users tracking her movement, eventually leading to the #HasJustineLandedYet hashtag.

Sacco, got off the plane a figure of hate, her reputation and career simultaneously ruined. In the aftermath of her online shaming, she became a reference point for numerous long-reads and documentaries focused on the rise of what would become known as “cancel culture”. Sacco, though not the first person to ever write a bad tweet, would go down as a ground zero for the phenomenon. She later told her her story in Jon Ronson’s So You’ve Been Publicly Shamed.

“To me it was so insane of a comment for anyone to make,” she told him. “I thought there was no way that anyone could possibly think it was literal.

“Unfortunately, I am not a character on ‘South Park’ or a comedian, so I had no business commenting on the epidemic in such a politically incorrect manner on a public platform … To put it simply, I wasn’t trying to raise awareness of AIDS or piss off the world or ruin my life. Living in America puts us in a bit of a bubble when it comes to what is going on in the third world. I was making fun of that bubble.”