The most famous pets on TikTok, ranked by cuteness 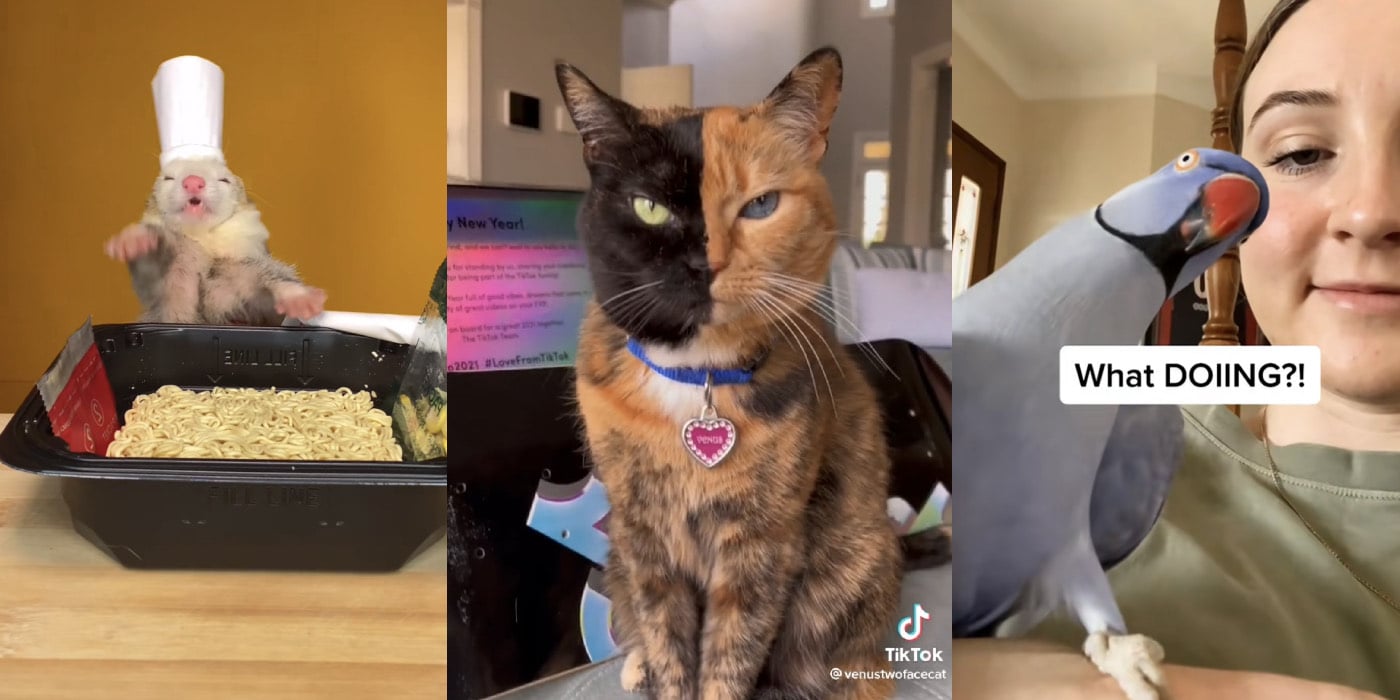 As humans, we’re out here busting our chops, getting our hair done, getting our lips done, our teeth, our complexion, in order to play the role of a successful influencer. We presume it’s all down to us and OUR image. That that is what the people of, say, TikTok, want to see. Then you go on there on there’s an account for a mouse raking in million more likes than you could ever dream of by just spinning in a wheel, doing mouse stuff.

The business of pet influencers has been booming since the arrival of TikTok, spawning animal-specific influencer agencies, big brand campaigns and partnerships, as well as on-screen appearances.

Here are ten of them, ranked by their cuteness. 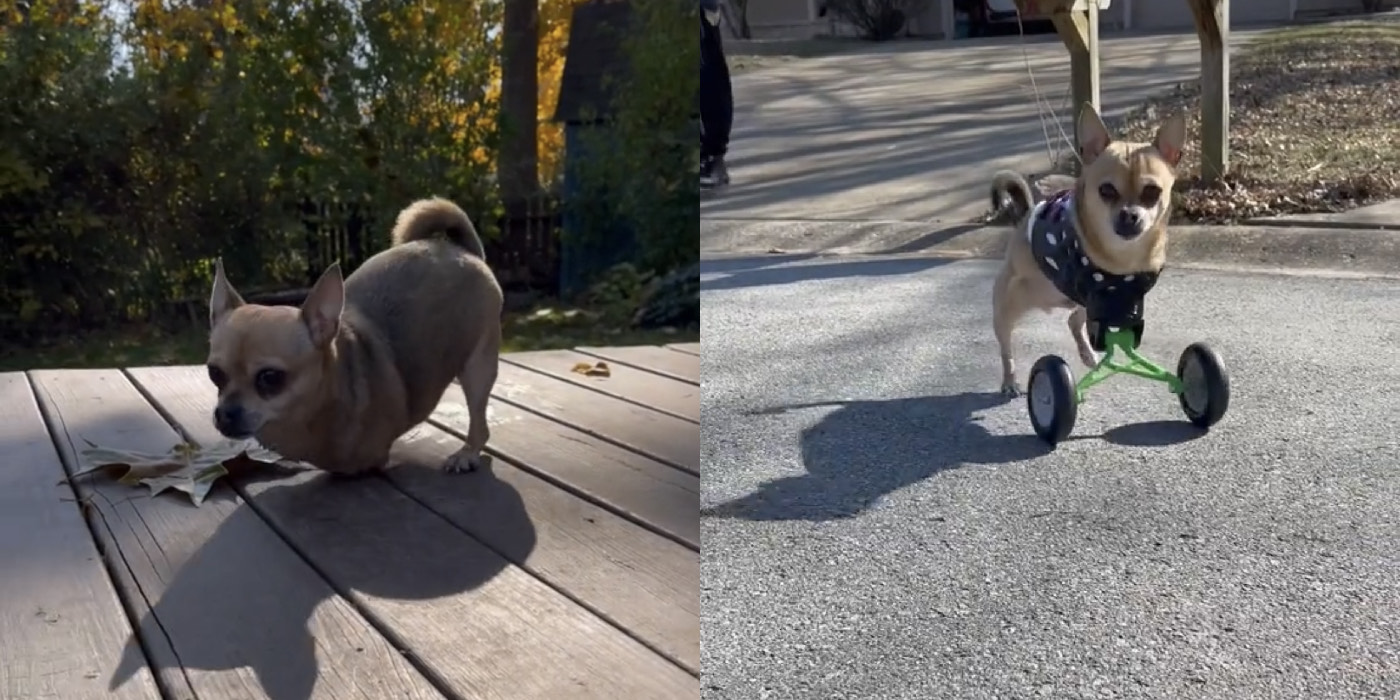 TurboRoo - named after the animated racing snail from a 2013 movie - was born without his two front legs. For an adventurous Chihuahua, that posed a problem. But when he became the first puppy to ever receive 3D-printed wheels to help him run around, TurboRoo went mainstream, both entertaining the masses and fundraising for other handicapped pets in need of prosthetics.

“I have always had a soft spot for animals who need a little extra attention,” Turbo’s mum said. “Turbo was set to be euthanized. No one wanted to take him in, let alone give him the chance to be the amazing dog that he is today! He is one of the strongest dogs I have ever seen in my 6 years of technical work. A little love and devotion and he has been given a better life than most people. Turbo has been flown to NYC, L.A, Colorado, etc. He has given new life to many dogs who would have been euthanized.” 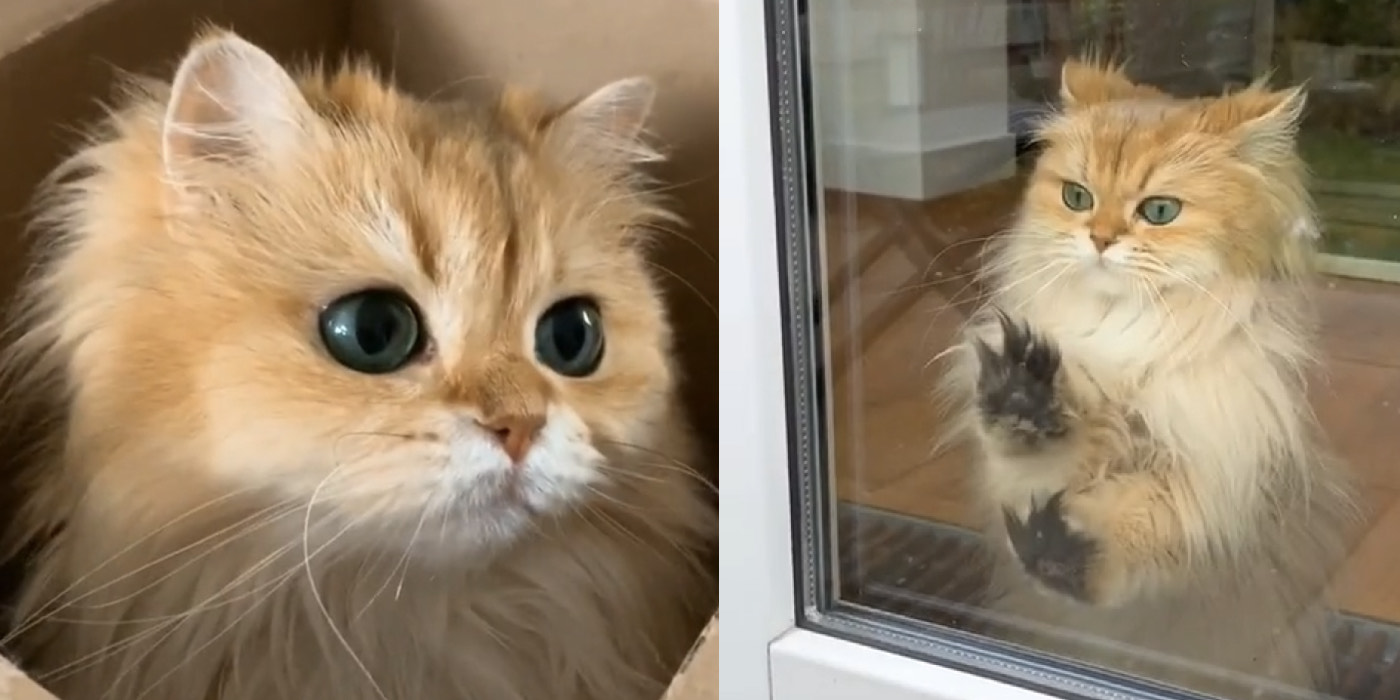 Smoothie isn’t just any cat. She’s the “world’s most photogenic cat”. News which, you can imagine, would mean nothing to her if she understood what that meant. Smoothie’s emerald eyes and golden fur have even inspired a mural in New Zealand. She has a brother named Milkshake who often features on her videos.

Owner Arvid Van Boekel said of reaching social media fame: “It takes a lot of time - at least a couple of hours every day, seven days in the week. It’s so much more than just posting pictures. It’s about creating the perfect shots, coming up with clever captions, responding to messages and emails, doing interviews and collaborations with brands and charities… And that’s next to playing with the cats, giving them all the love they deserve, grooming them every other day, and having a full-time job. It started as something really easy, but grew into something much bigger.” 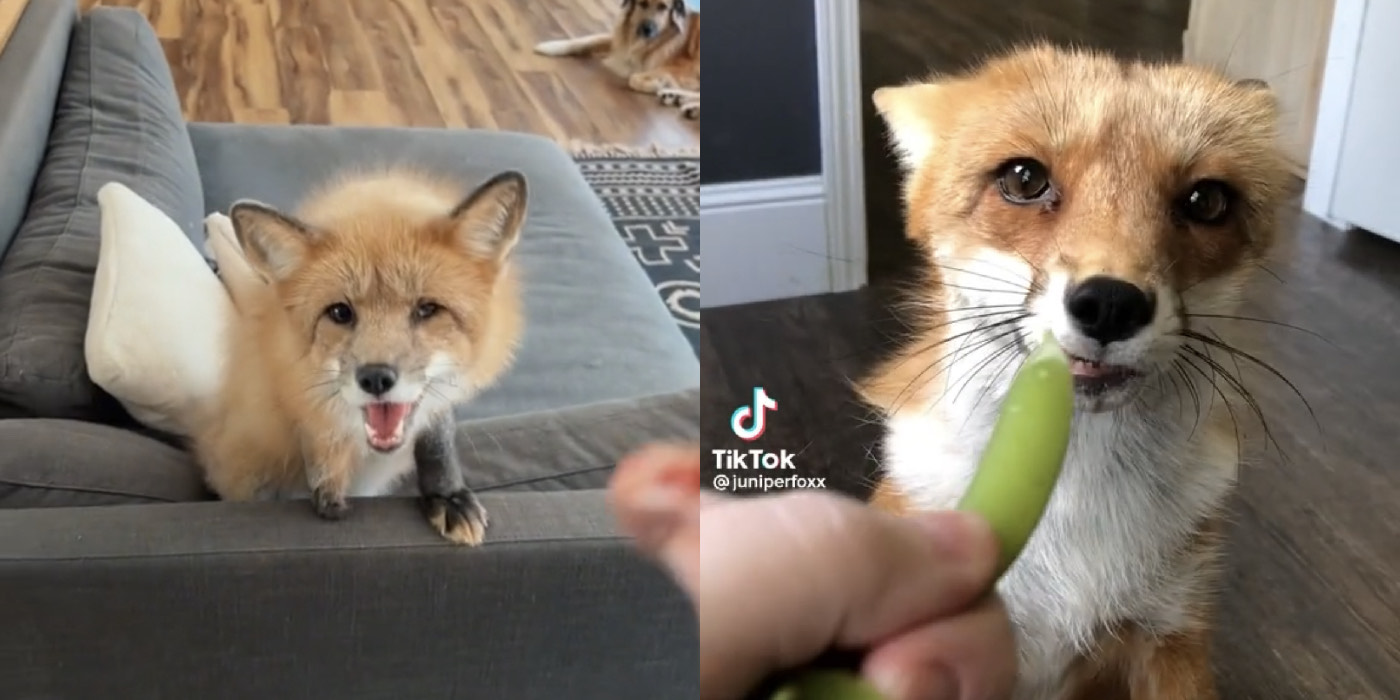 While a lot of “cute pets” tend to be cats and dogs, we’re mixing it up on this list, bringing a rogue fox into the equation. Well, Juniper isn’t literally rogue. She’s domesticated. Instead of traipsing the streets and wilderness making terrifying human-sounding mating calls, she’s at home with fellow fox Fig and dog Moose, fighting over who gets to eat what. All playfully. If you’re into unorthodox pets and orange things, Juniper Foxx is an account you should definitely be following.

“In every interview, in so many comments, I get asked “how do you deal with all the chaos?” “Why do you put up with it?””, her owner said in an Instagram post. “As if I’m somehow burdened. In truth, these animals are the best thing that has ever happened to me. A gift I wake up to over and over, every morning. I would never ask for a different life. This is all I ever wanted and I didn’t even know it.” 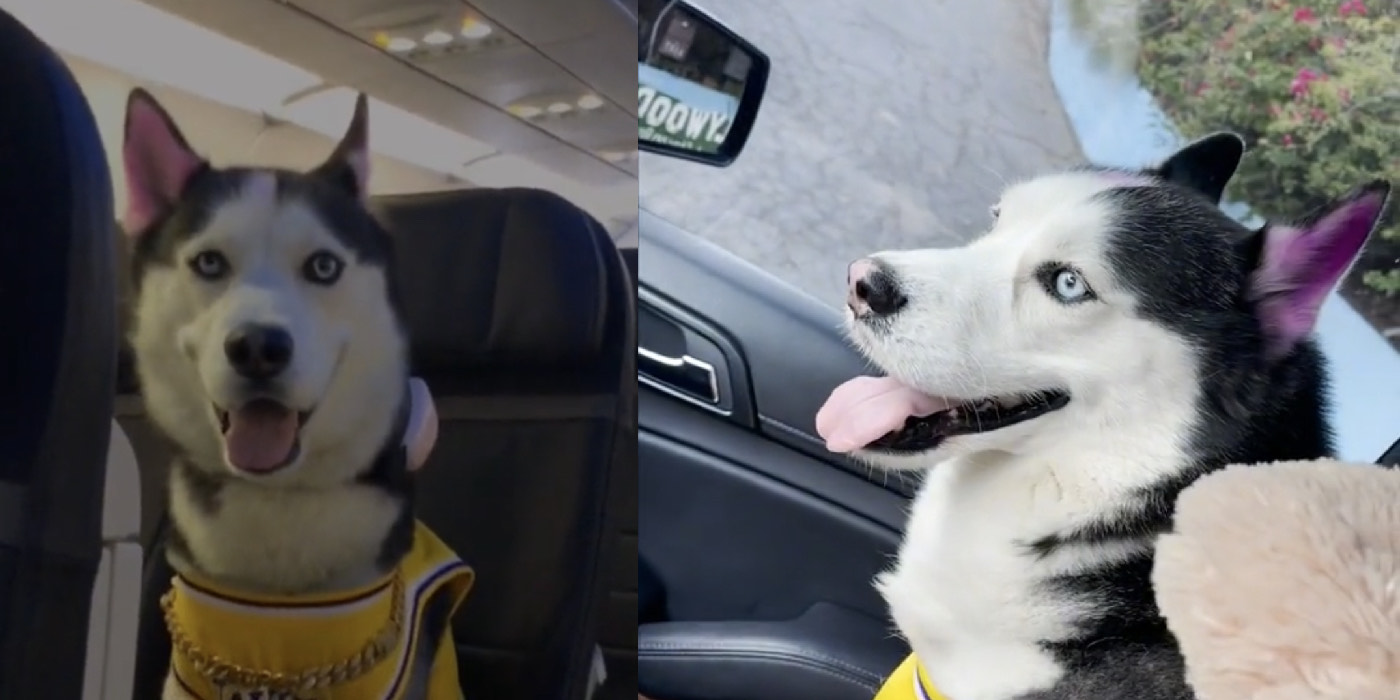 Swaggy may well be the first famous dog to find success on TikTok rather than drag over established fame on Instagram or YouTube or some such. His pink-dyed ears made him an instantly recognisable celebrity on TikTok. He has since collaborated with other influencers, often spotted on the streets of Los Angeles.

He was even interviewed backstage at the KSI vs Logan Paul fight. True story. Not saying it was a great exchange but it happened all the same. 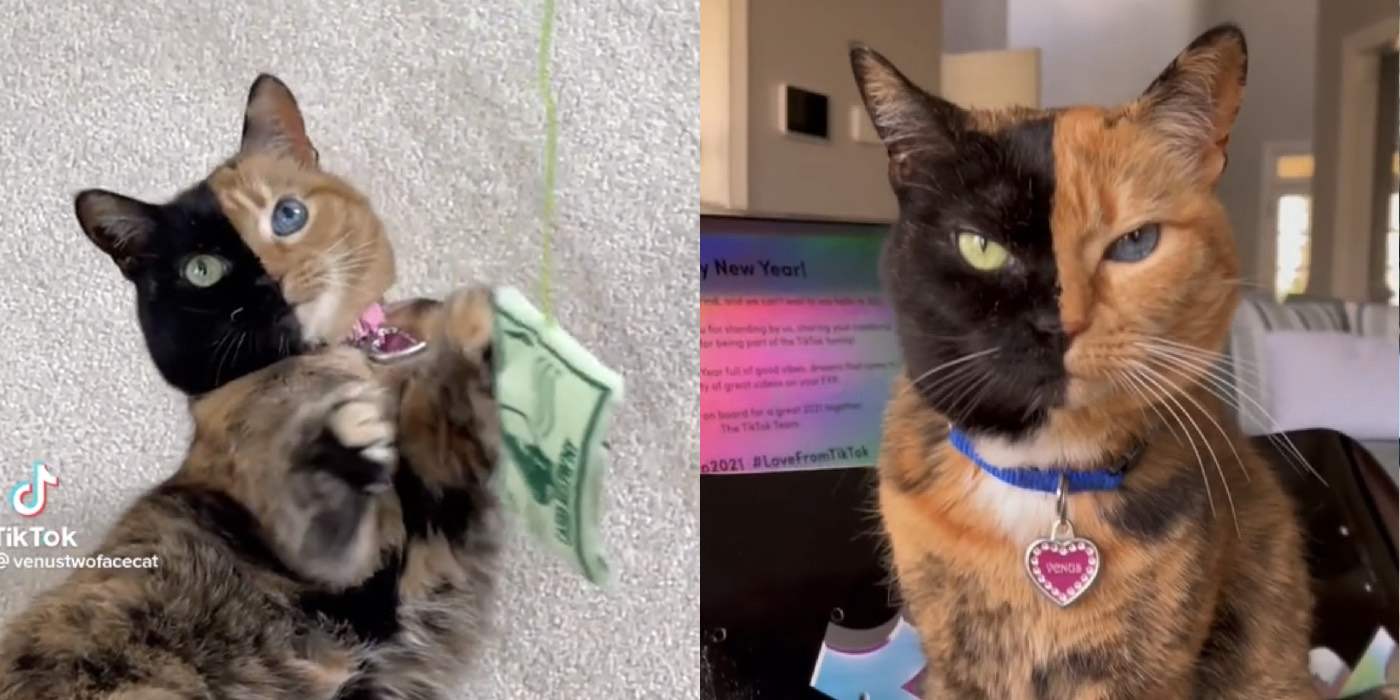 Don’t panic, Venus doesn’t actually two faces on the one head. It appears that way because one half is a different colour to the other. She first came to attention in 2012 through a Reddit post and is now enjoying her time on TikTok. She owes her look to being a “chimera” cat whose cells contain two types of DNA.

“As long as I am in a quiet area, I am comfurtable,” Venus revealed in an interview. “I don’t mind travelling and meeting fans, but Meowmy limits my travel because she’s always got my best interests in mind. Even if there’s purrtential big money, if she thinks I won’t be at ease, she’ll turn it down. She understands that like most cats, I prefur to be curled up at home on a soft bed… or lap. 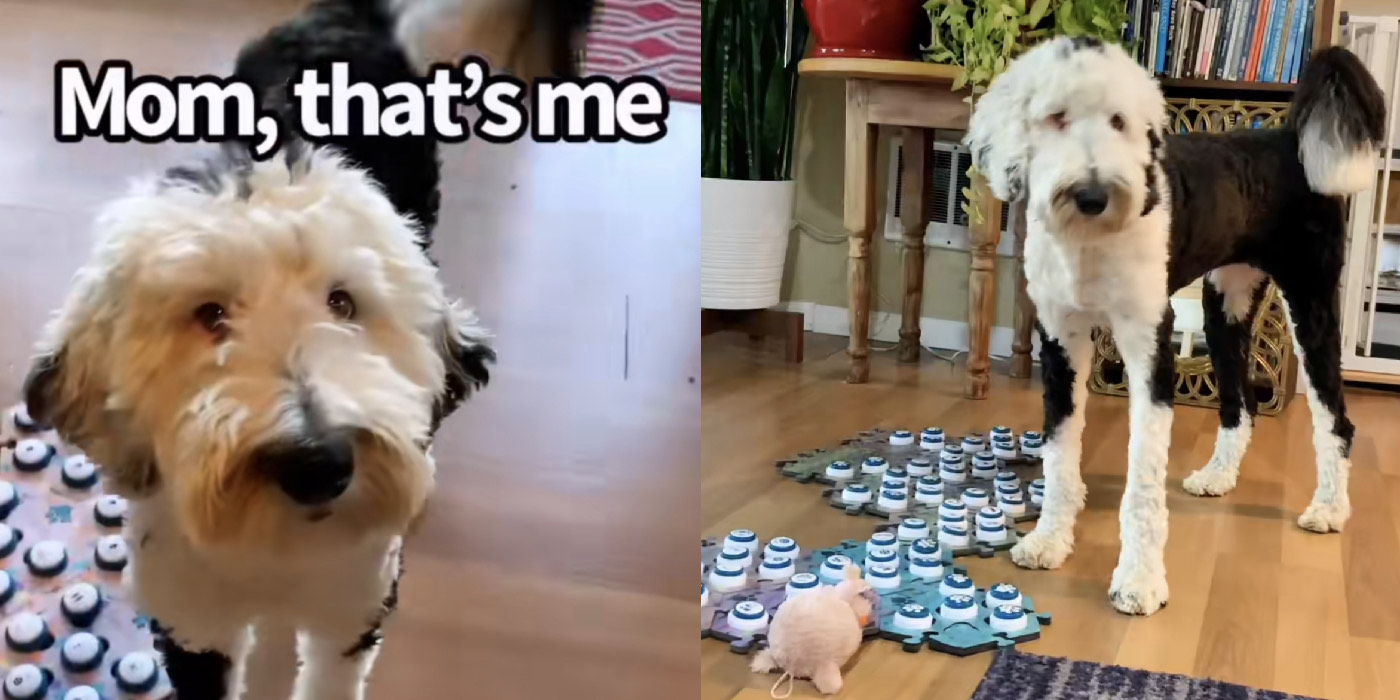 In May 2020, Bunny of @whataboutbunny fame, went viral on TikTok from a video where she was apparently communicating with her owner. The video scored views in the millions. Viewers were dumbfounded. The duo went on to pair up with a scientist and an engineer to beta test a new device based on cognitive science.

Bunny is a sheepadoodle mix. Her owner, Alexis Devine, always planned for Bunny to learn how to talk. She researched communication and cognition in canines, as well as dog training. The work of Christina Hunger, a speech pathologist, who had been teaching her dog to speak using augmentative and alternative communication, was also a big catalyst. Hunger used programmable buttons that her dog, Stella, could then press to press in succession together to form “sentences”, and used words like “outside”, “Stella”, and “good”. This inspired Devine to have her own button when she received Bunny in October 2019 for the word “outside”, which Bunny mastered. 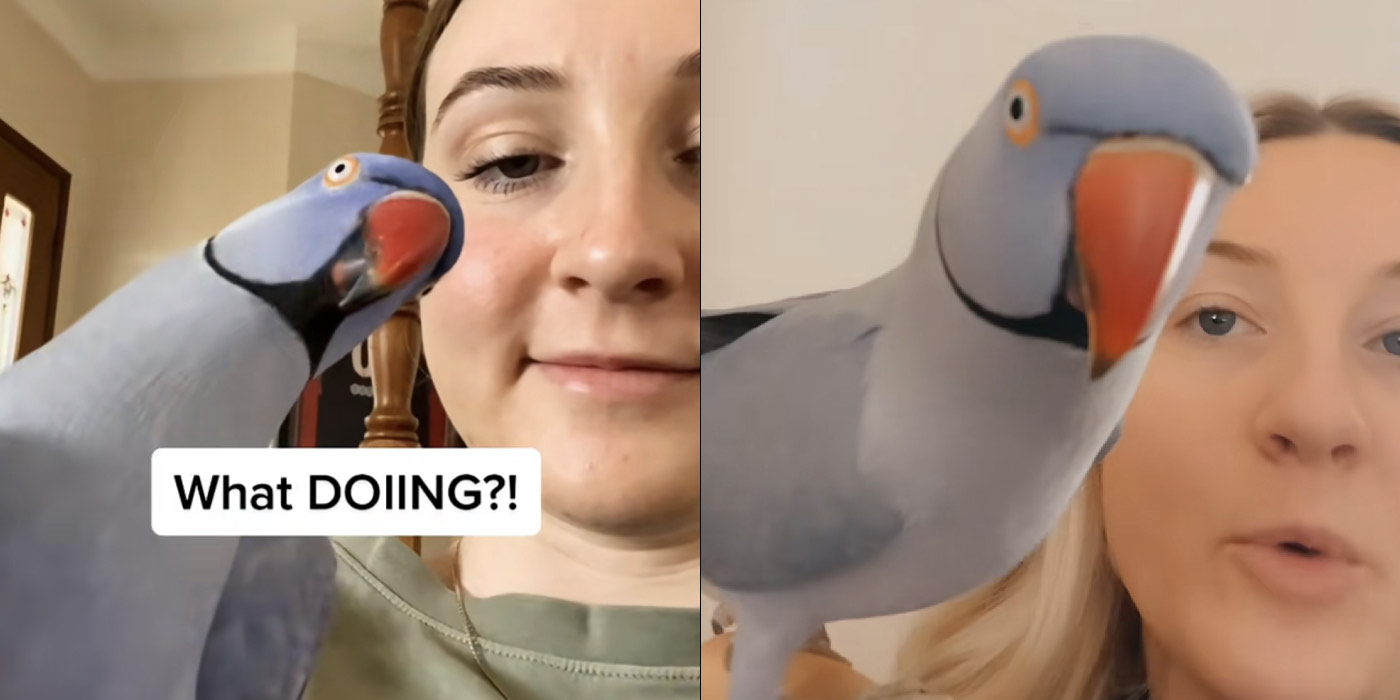 For some, mention the name Hamlet and they’ll think of Shakespeare. Mention it to others and they’ll think of the cheeky Aussie Parakeet. Owner Bridget had lived with Hamlet for four years before deciding to share him with the world upon the arrival of the pandemic. Viewers were delighted to see the Ringneck bird reel off his favourite phrases, of which “What doing?” became the most famous.

After posting a couple of videos to TikTok, Bridget realised that not only was Hamlet helping her, but he was helping thousands more online. Before long, her TikTok account was ballooning in size. Today, she and Hamlet have a whopping 4.1 million engaged followers. They watch every video posted with Hamlet involved. A born entertainer, Hamlet doesn’t shy away from the camera and is happy to bring that dough in for Bridget. 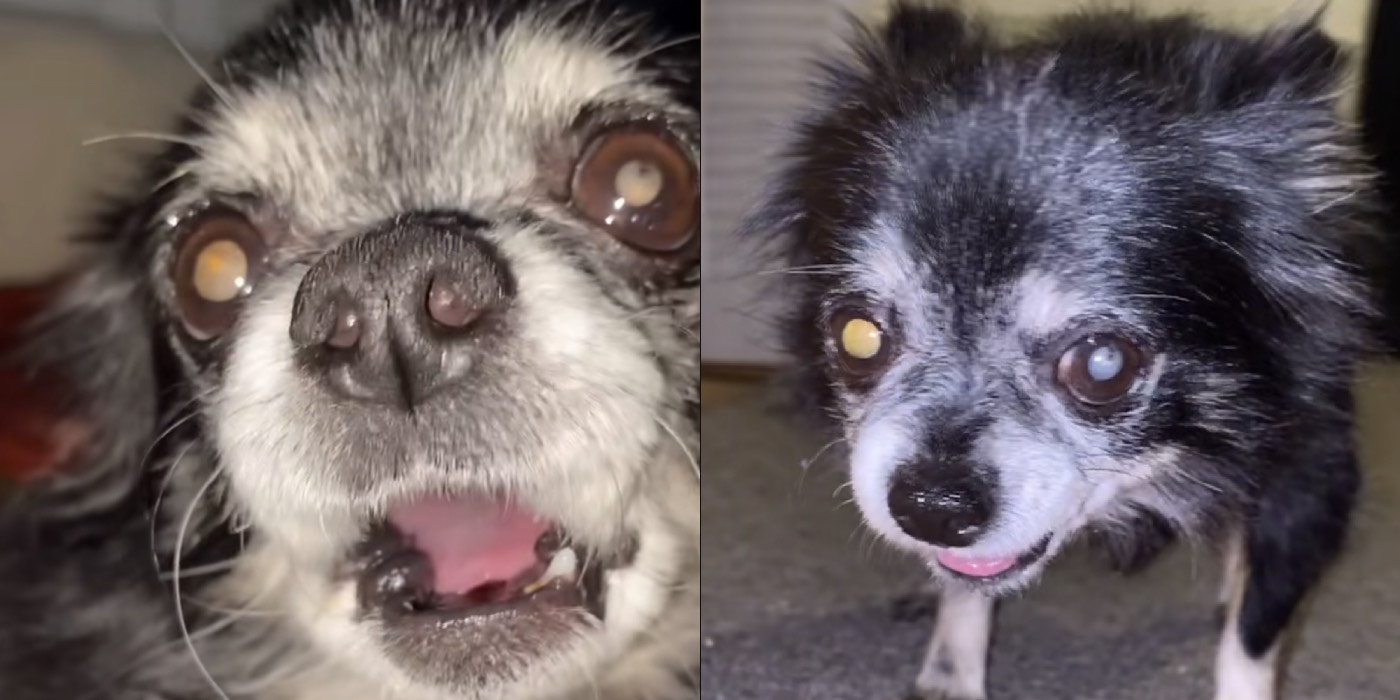 The internet went bananas for this small and chippy Chihuahua after going viral on TikTok when its owner, Malachy James, asked, “Can I get an Owa Owa?” for Pudgy to respond by biting his headphone mic and replying “Owa Owa!”. The clip amassed over 50 million views gained the pair 12 million followers on the platform.

Sadly, Pudgwoke is no longer with us. James announced last July that he and Pudgy had been on a walk when he was stopped by a guy wanted Pudgy to meet his dog. I put Pudgy down and I assumed they are about to just sniff each other. That’s what dogs usually do when they meet each other,” he said. The other dog then “instantly attacked Pudgy.” They rushed him to a hospital where the injuries proved too brutal and costly to remedy. 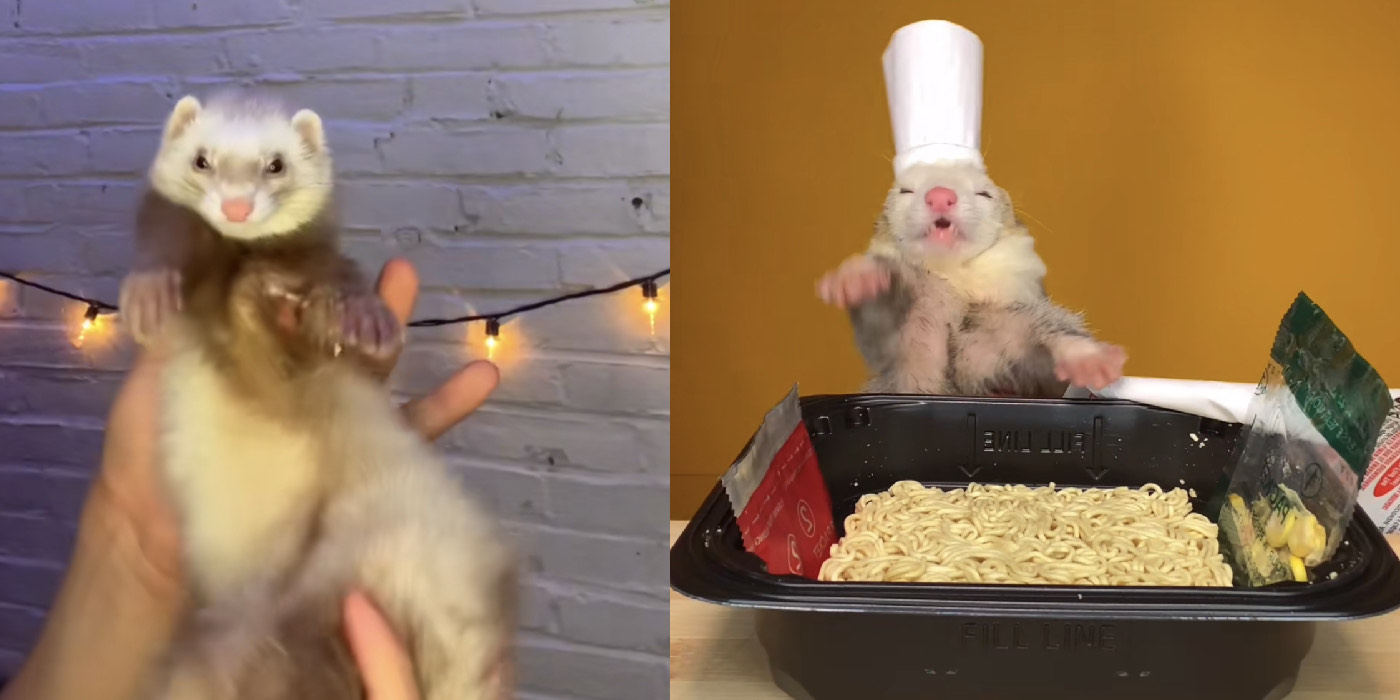 Matilda the Ferret is the subject of TikTok account Floofnoodles, and first found TikTok fame for going viral dancing alongside a little Pikachu toy in 2019. Matilda experienced a few health complications but came back stronger, dancing more than ever to TikTok’s most viral songs.

Matilda’s owner, however, was subject to a petition calling for him to be deplatformed. “He continuously shares dangerous misinformation about the care of animals and uses them to accrue money through donations from the community and TikTok and Instagram’s Creator Fund/Reels Program, ” the petition said. “He needs to be deplatformed to stop his exploitation.” 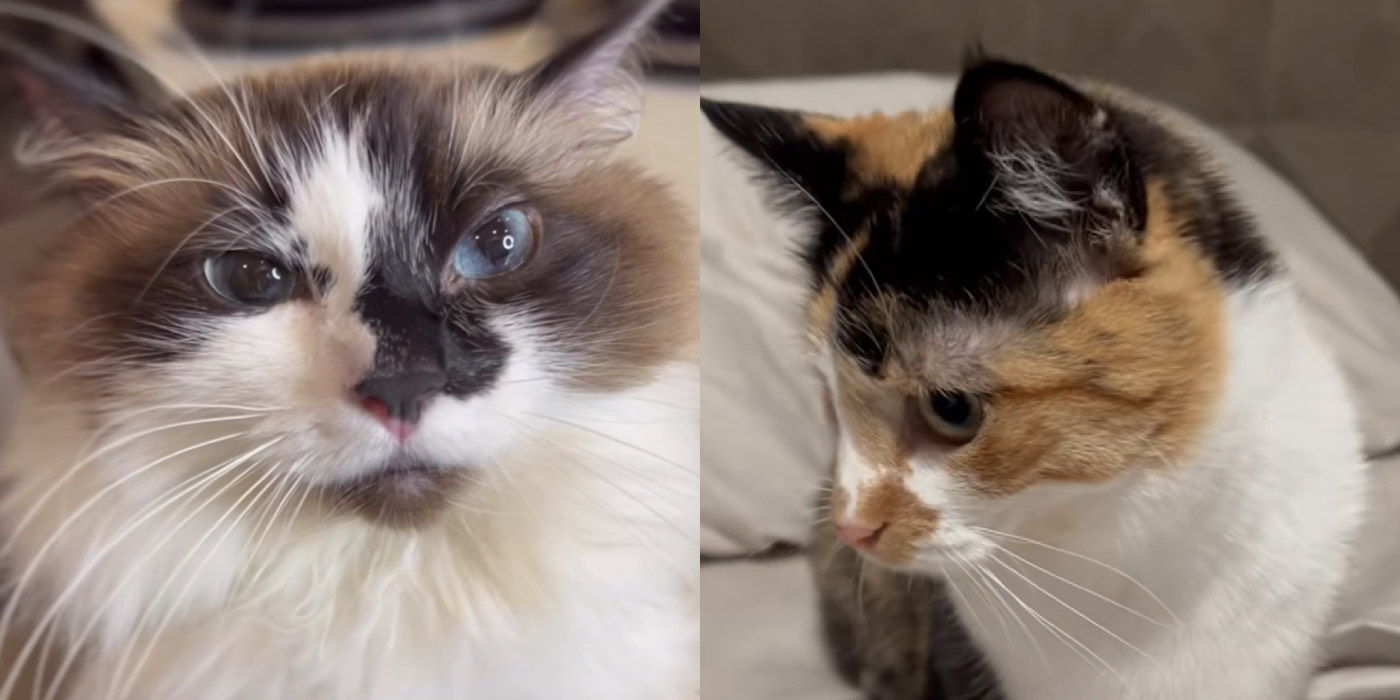 Kareem and Fifi’s feline trio consists of a brown tabby named Chase, a tortoiseshell named Millie and a Himalayan named Skye. Together, they make up Chase, Millie and Skye! This pesky lot get into all kinds of trouble on their TikTok account, where videos show them being strapped in car seats for short rides to pet stores. Their spa day videos are by the most popular, though.

In these clips, Kareem and Fifi relax alongside their furry friends, comfortably snuggled up underneath towels. Fifi is less taken with the situation and tries to remove the cats from the situation so she can enjoy it all to herself. But wouldn’t you have it! Chase refuses her attempts to get him out of bed. There’s no point trying to pull a fast one on these cats. They’ll always win.