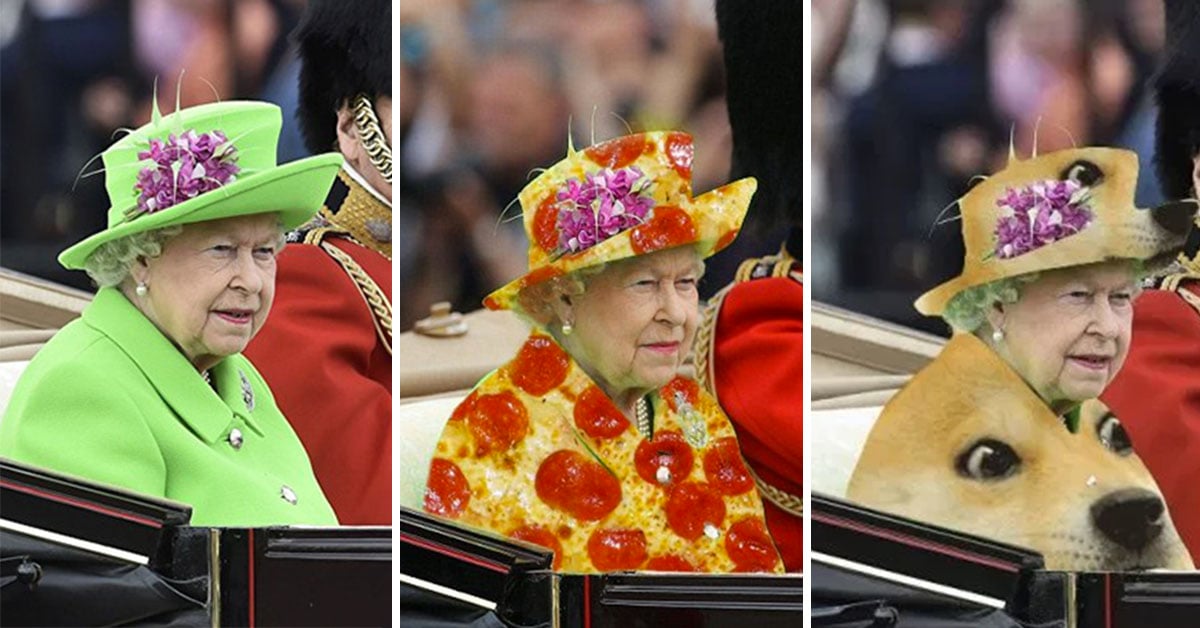 Choosing what to wear for your birthday can be a very stressful affair; this is especially true for the Queen of England, whose birthday celebrations are televised for the world to see! And, unlike myself, the Queen doesn’t have the option of simply staying in, wearing the same jumper everyday, and telling everyone else to sod off while watching TV in peace and quiet! 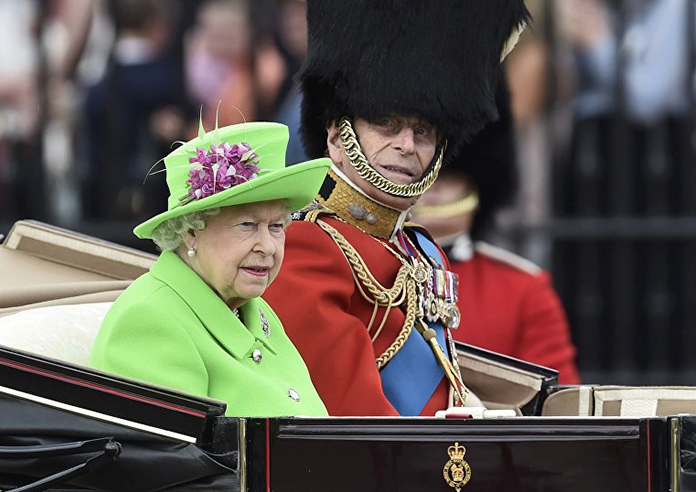 The Queen, also being of a similar vintage to yours truly, probably didn’t consider the possibility that the most important element to her outfit choice would be the colour. Queen Elizabeth ultimately went for a weirdly green number (pictured above), which allowed the hordes of tech-savvy internet users to use some kind of computer trickery to alter the appearance of her outfit into whatever took their fancy… modern technology eh, will the marvels never end?

The result was a plethora of hilariously altered images of the Queen’s outfit from her birthday celebrations, the best 20 of which I have gathered here for your viewing pleasure!

1.) One Queen With Extra Pepperoni 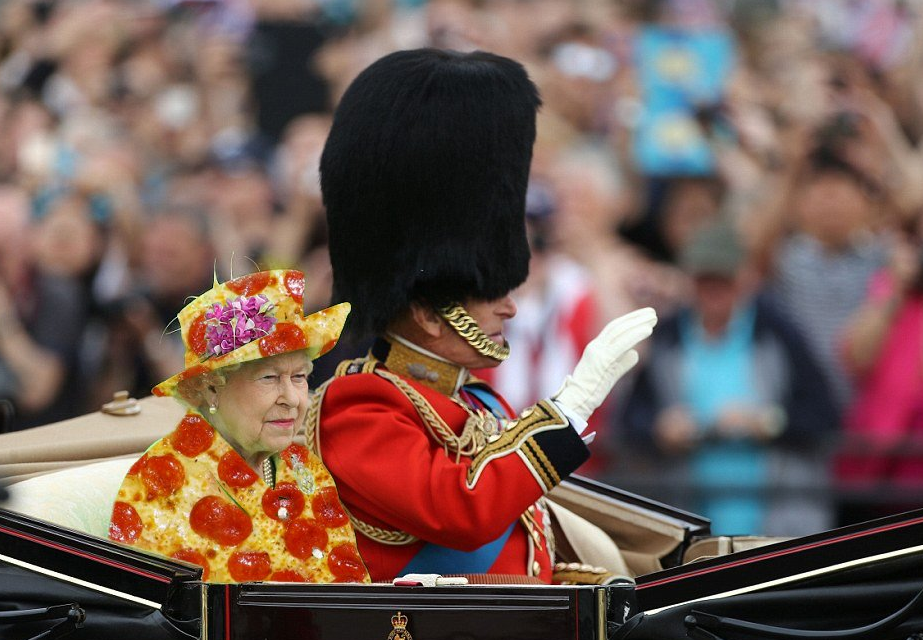 I think this one’s a little cheesy even for me if I’m honest! I can’t help but imagine how greasy it would be too actually wear an outfit made out of a pizza. I’ll just have to ask Lady Gaga, it sounds like the sort of daft thing that she’d do! 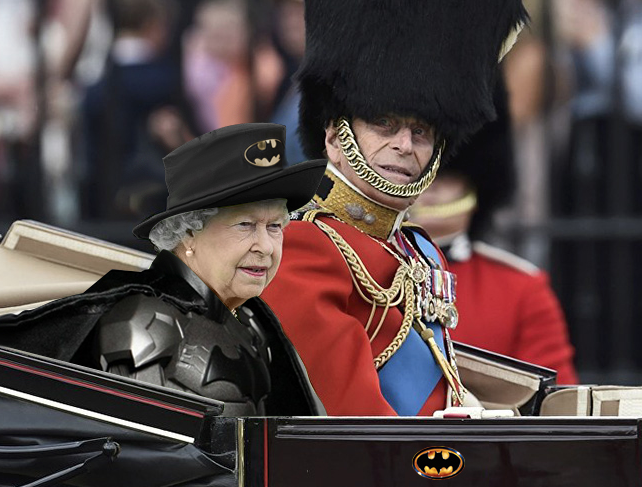 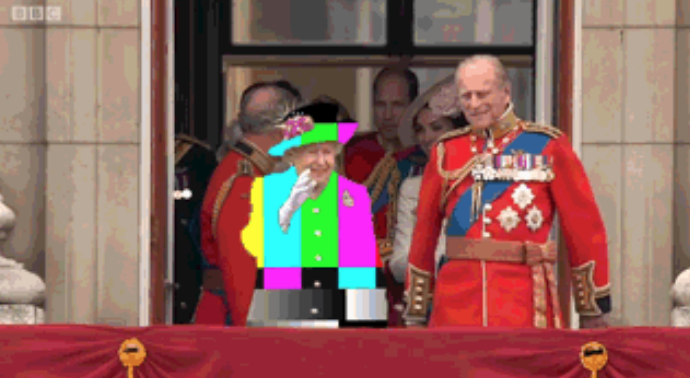 Get it? It’s like ‘screen test’, but I put Queen in there cause it sounds sort of the same. 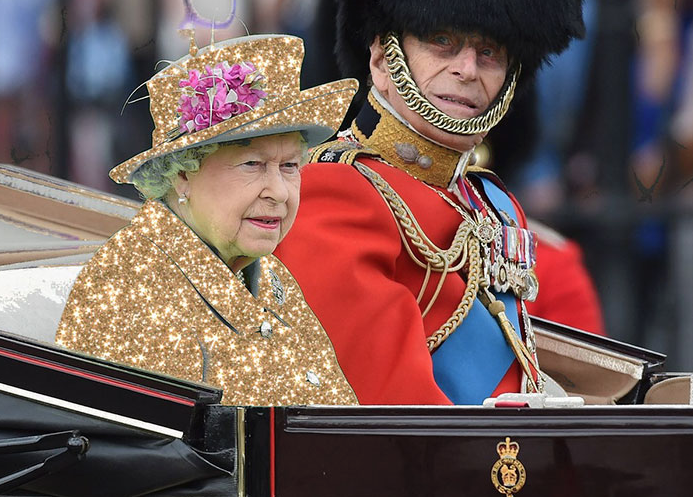 Nothing says royalty like a solid gold, glittering outfit! Who says you can’t get more bling as you get older?!

This is one of the downright weirder ones! I may be old, but I know that the eggplant has some filthy connotations as well in this day and age, so God knows what they meant by this one! 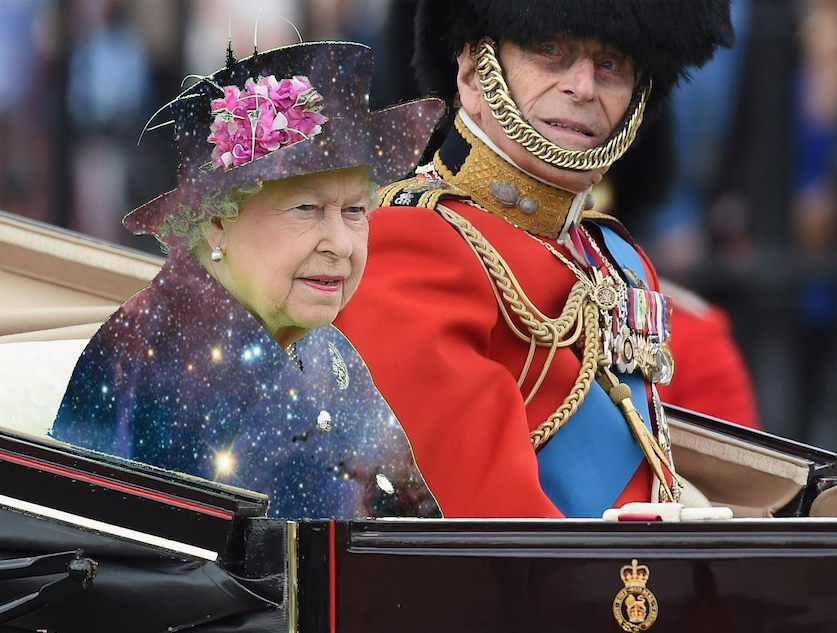 Kneel before her, the Galaxy Queen. She gazes out across the universe, purveying her intergalactic empire with a look of victory… either that or she’s taken something she probably shouldn’t have!

I’ve never actually seen Game Of Thrones but thought putting this one in would make me look more ‘with it’! 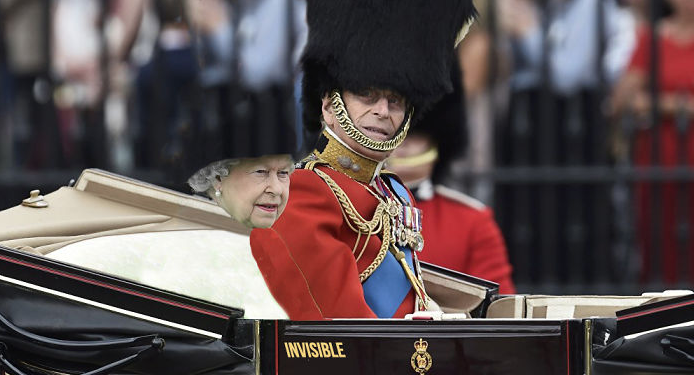 I like how this person put the word ‘invisible’ on the carriage, just in case people were wondering what they’d done with the picture. We can bleedin’ see what you’ve done… or, actually, we can’t? 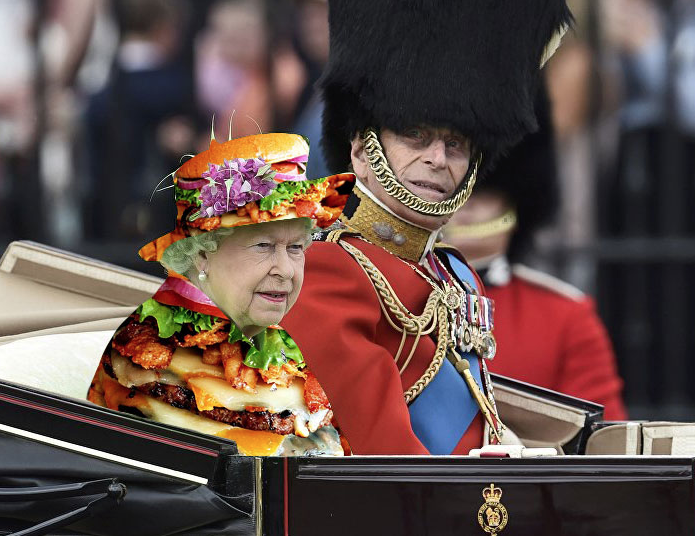 Can I get that outfit with a side of fries and a large soda to-go, please? Oh, and hold the pickles! 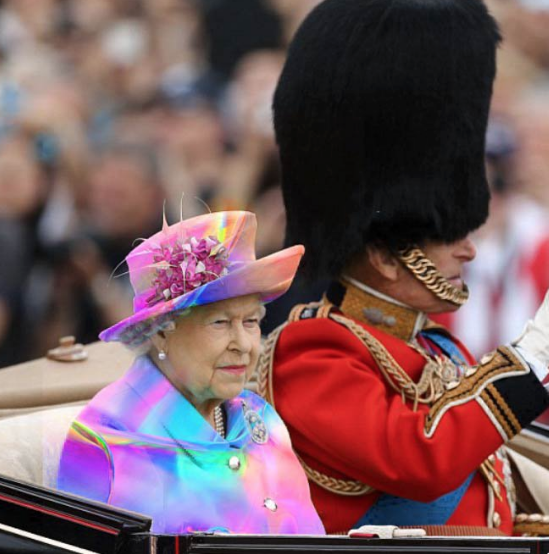 This was clearly taken during her Majesty’s soul-searching phase. Rumour has it she spent six months in Australia learning to surf and building home-made dream catchers to sell on the sidewalk to fund her hacky sack career. 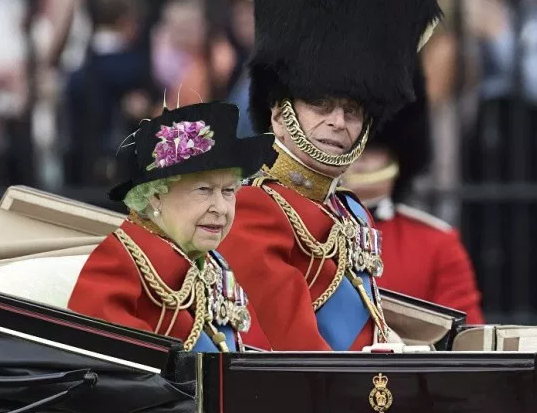 Nothing says ‘we’re in a strong relationship’ like going to a party in a couples costume. Either that or Queen Elizabeth is just mighty annoyed that Philip stole her outfit idea! 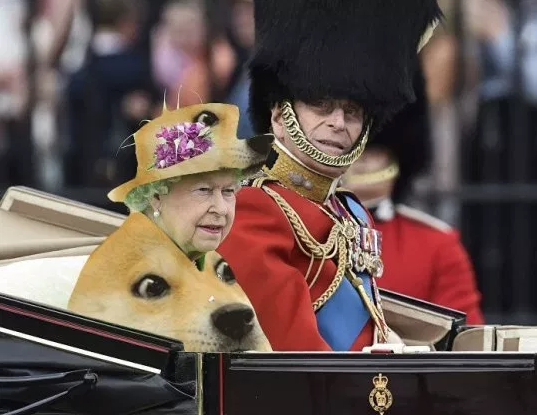 I know that the Queen loves dogs, but this might be a little too far! The expression on the dog’s face also makes it look like the carriage is heading over a cliff!

13.) Cloudy With A Slight Chance Of Reign! 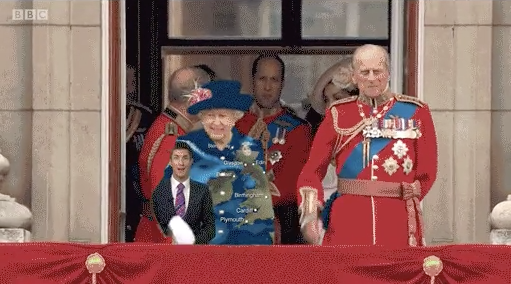 The Queen has many duties to fulfil in her position as head of the British Monarchy, one of the most important being keeping the British public informed of any sudden weather changes via her outfits. 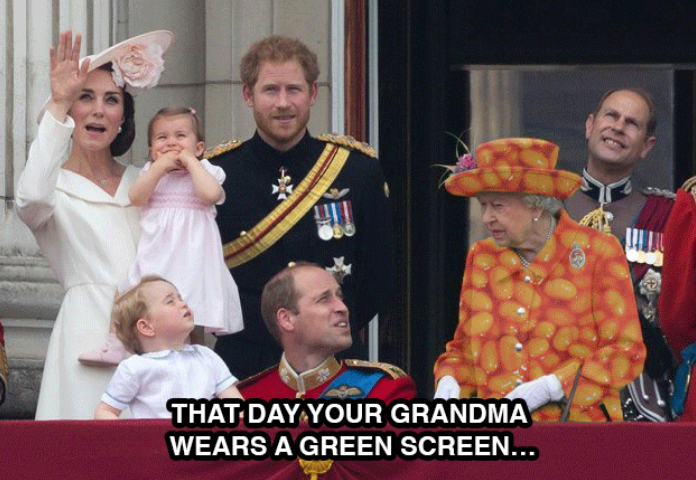 We’ve all bean there (you’re welcome), you’re all ready to go out and you spill some beans on your outfit, so you just have to crack open another tin and pour them all over yourself to make it seem like an intentional decision. 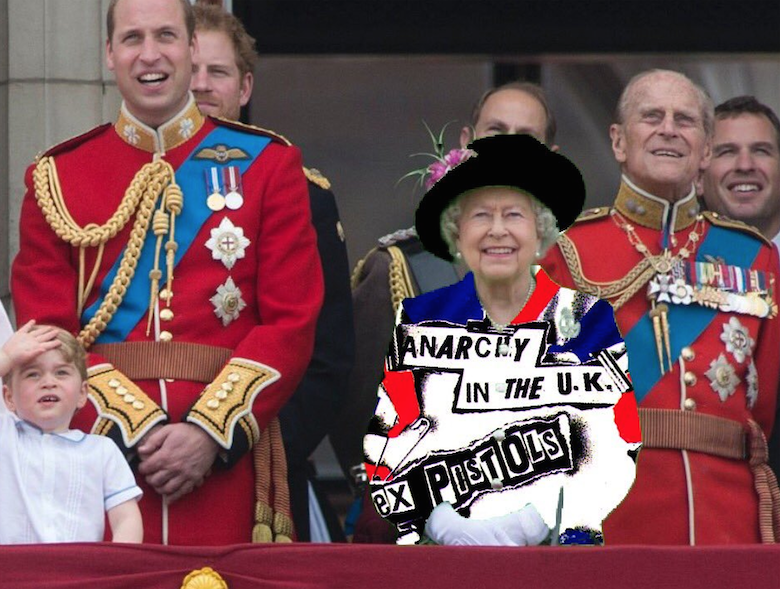 I always knew that deep down the Queen must have been a big Sex Pistols fan! 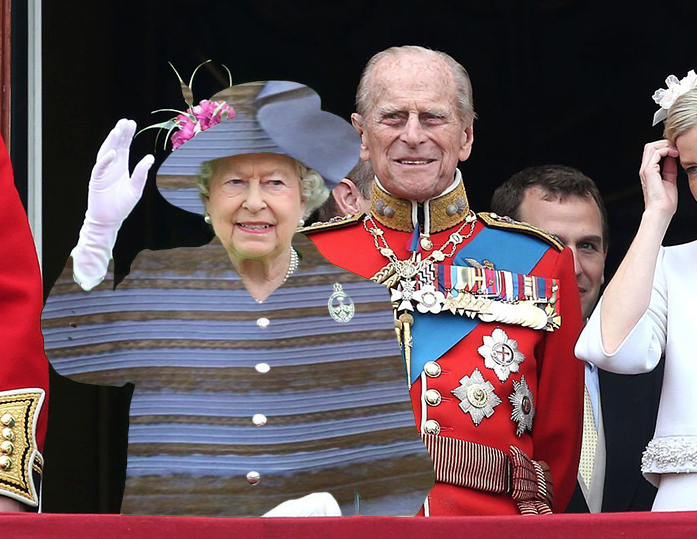 This dress effect exploded across the internet back in 2015 when people across the globe disagreed over whether the dress was blue and black or white and gold. It is a phenomenon of human perception, but which one do you see? 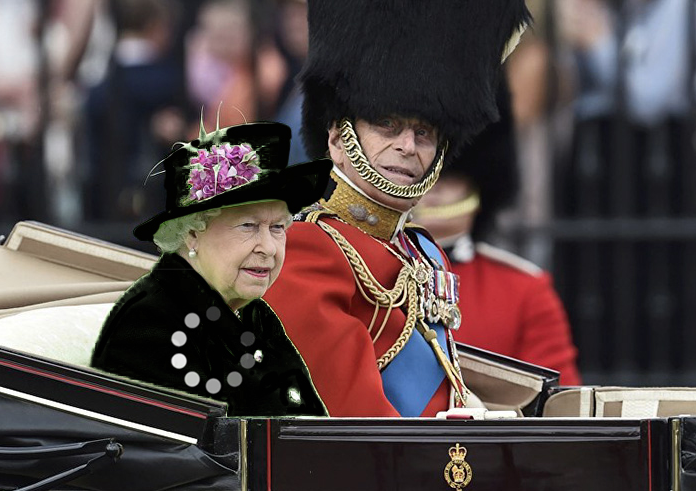 Don’t you hate it when you’re ready to head out but your outfit is still buffering? It’s just the worst! 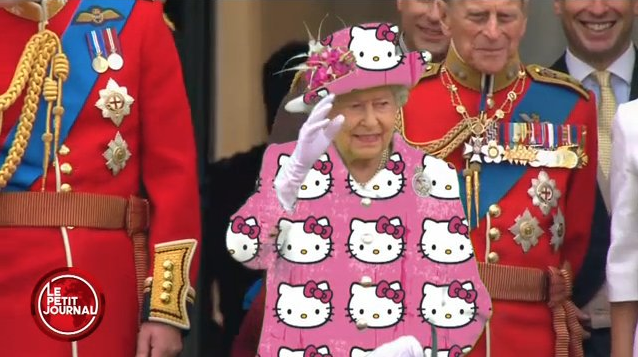 It’s important to remember to embrace your inner child as you get older, it helps keep you grounded! My little niece had wallpaper just like that when she was growing up. 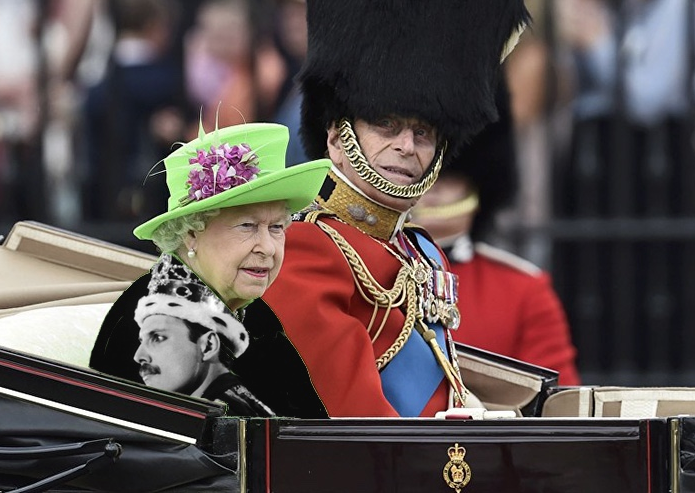 Who wore it better? The outfit that Philip is wearing looks much more like something that Freddie Mercury would wear if I’m honest though!

20.) Server Could Not Find Requested Outfit 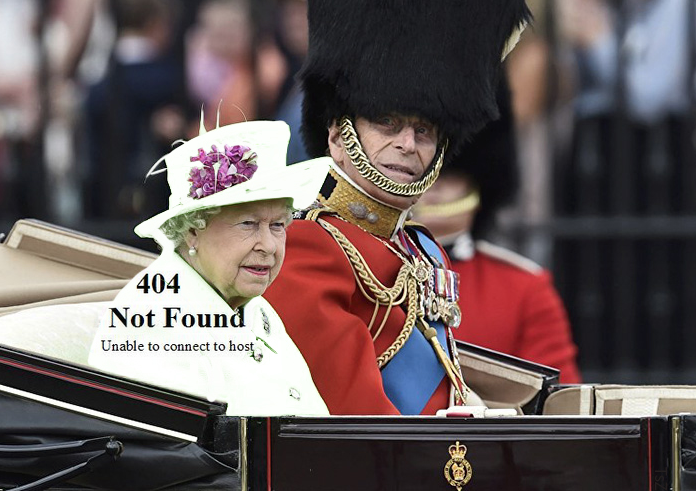 The Queen’s outfit clearly encountered an error. I think the main error was no one in her immense ranks of staff thinking to warn her that wearing green may have been a bad idea! I guess she is the Queen though, she can wear whatever she wants!

So those were 20 of the daftest and strangest outfit alterations that the internet made to Queen Elizabeth’s outfit on her 90th birthday! Let me know which one was your favourite in the comments below!