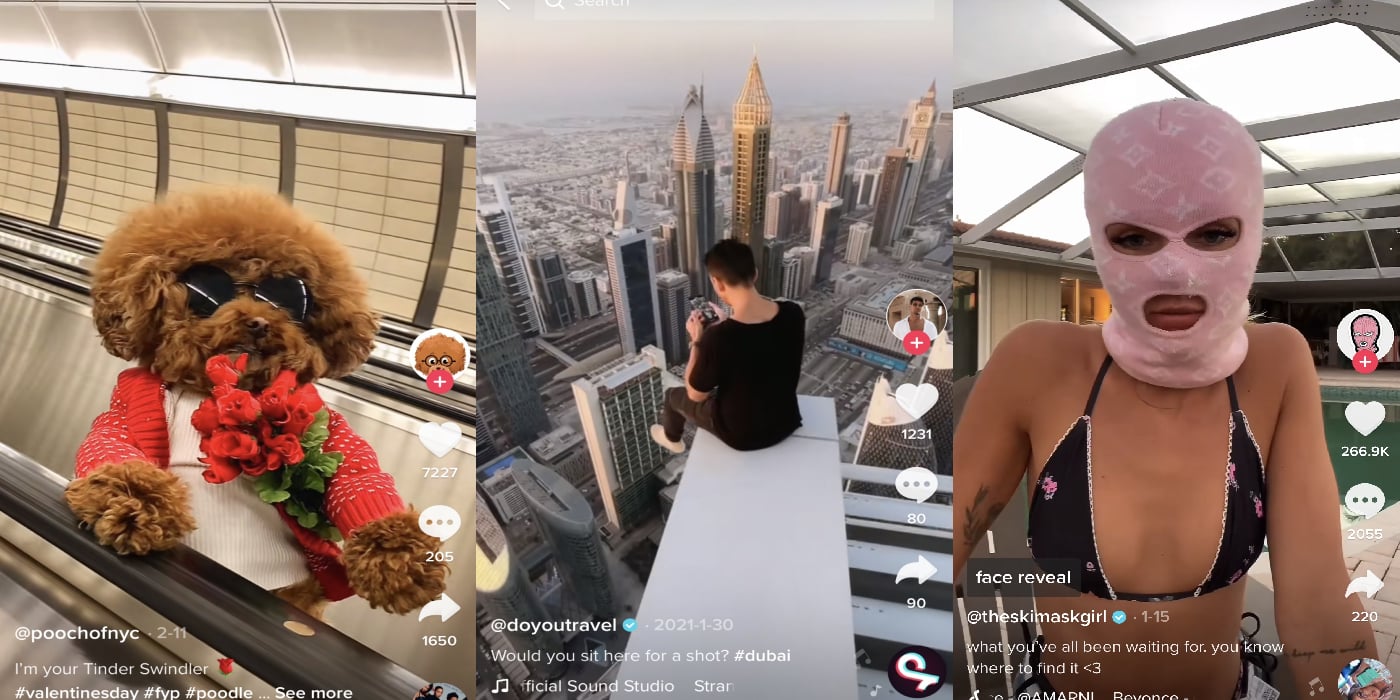 Internet anonymity has always been a two-sided coin. On the one hand, it protects law-abiding individuals from shady types and stalkers, and keeps you and your friends from having your photos saved and shared in circles you wouldn’t want them shared in. On the other hand, it allows trolls and creeps to prosper and for hate speech to go unpunished.

In 2019, smartphone users were encouraged to think twice about downloading apps that may breach and abuse their privacy. Russian-owned FaceApp came under fire after it was suggested by the FBI that it posed a great security threat given its ability to obtain selfies and so-called biometric ID of millions across the world.

Is there ever a way of making a name and career for yourself on, say, TikTok, while not showing your face? Surprisingly yes. There are a number of examples of how certain types of content can thrive on anonymity, namely life hacks, unboxing videos and gameplay.

Here’s the rundown on making it as a faceless TikToker.

Do I have to show my face on TikTok? 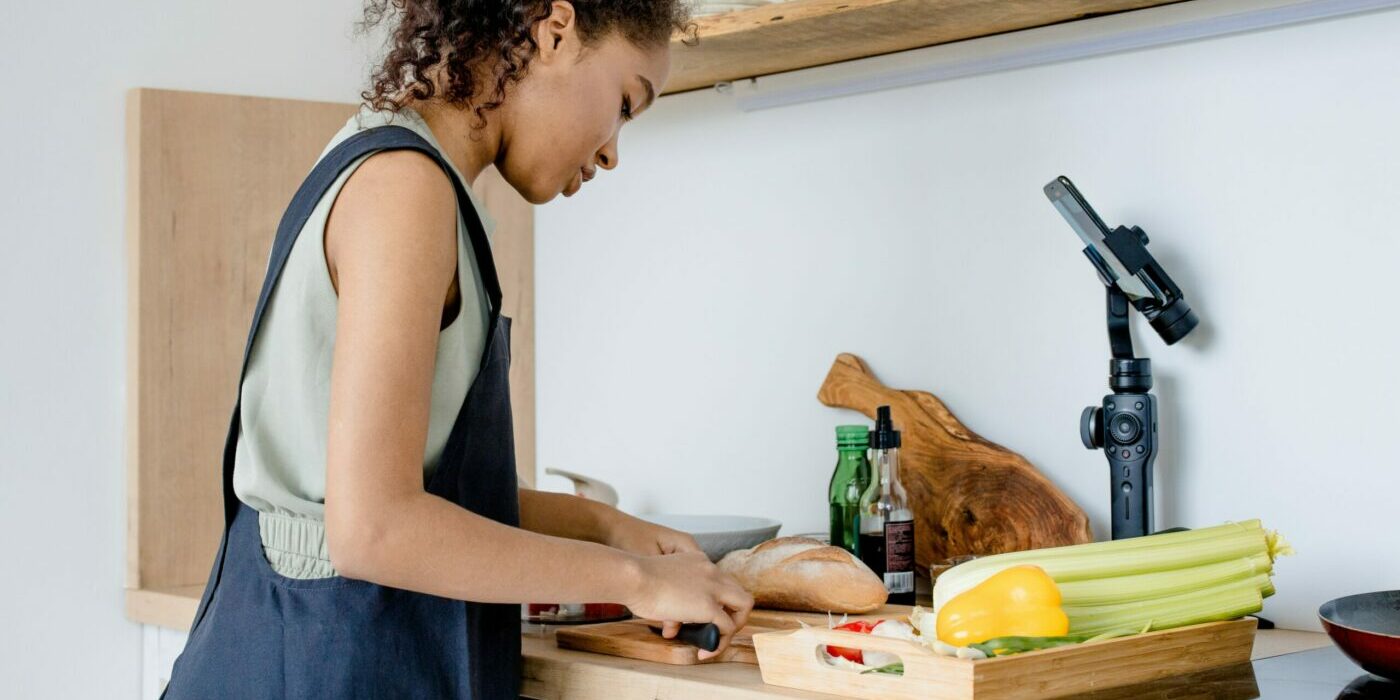 Wanting to board the TikTok train without showing your face? As a consumer, it’s fairly easy. But how about all those young guns out there hungry to create content. Don’t I have to be an attractive twentysomething making dance routines videos to have any degree of impact? Not necessarily.

There are not any stipulations that require a user or creator to show their face, although it does help with TikTokers gaining a following. There are many avenues “faceless” users can go down such as life hacks, gameplay, ASMR and unboxing videos which can often be anonymously made and successfully so.

Why would someone hide their face on TikTok? 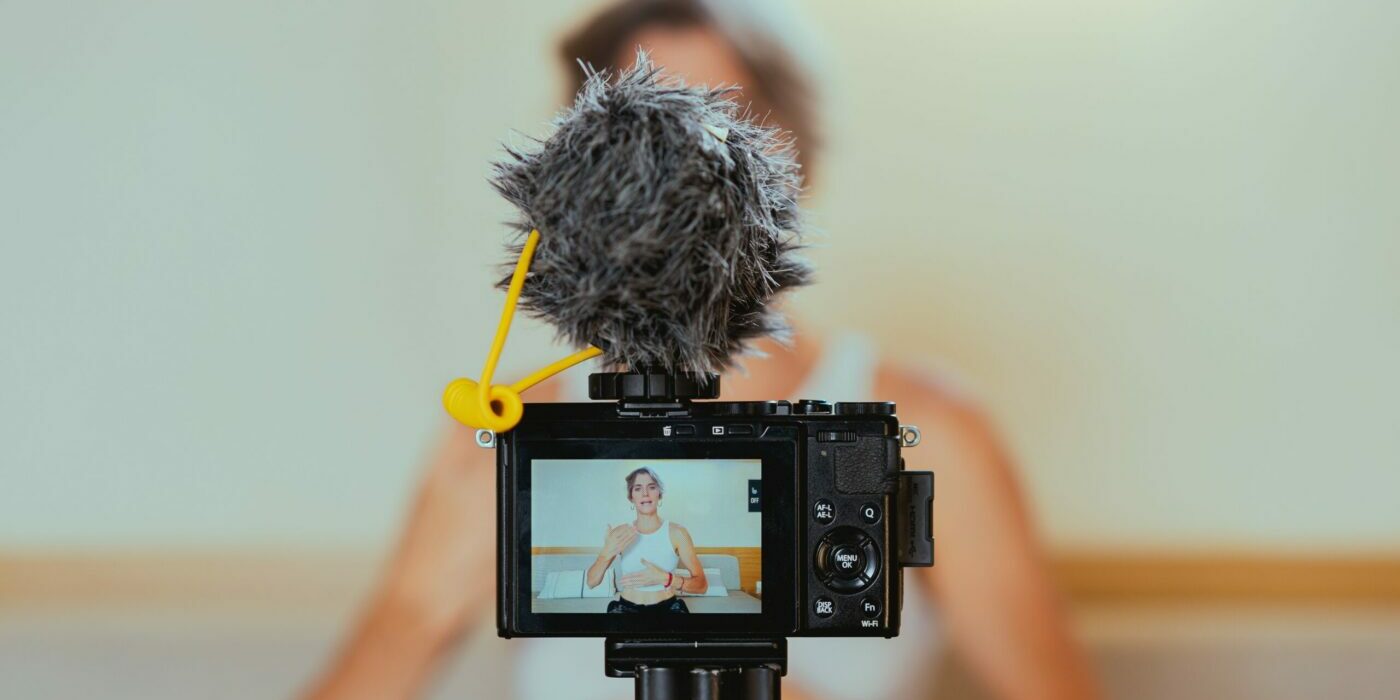 It’s not unusual to see the girlfriend/boyfriend of a social media blurred out or protected. They might not want a part of their special someone’s account knowing how it could make them a target for abuse or harassment. But what if there isn’t a partner in the picture? What if it’s just you? Why would you hide your face?

There are many reasons why someone would hide their face on TikTok. For example, some creators may view their account as a side hustle and not want their employers to find out. Some may be insecure about the way they look or the content they create and not want to open themselves up to personal attacks. For others, it may be a religious or cultural choice.

Does TikTok spy on you? 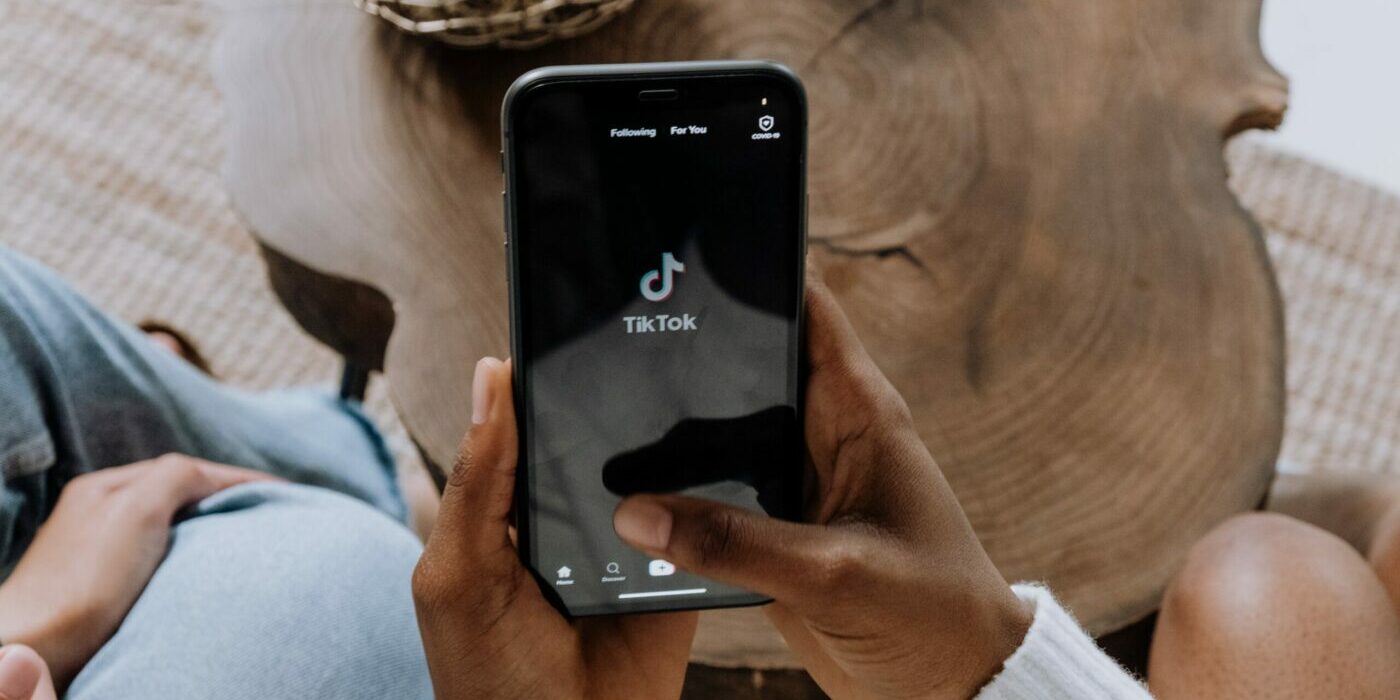 With TikTok being the first major social media player to not sprout up in California, there is scepticism among some, suspecting the app is a government tool to spy on foreign citizens. These fears were likely exacerbated by then-president Donald Trump moving to have TikTok banned in the United States. A move that was later reversed by President Joe Biden.

Here are the facts. TikTok can gather information when you load the app, regardless of whether you’re signed up or not, via cookies. Once you do create an account, it collects data about your activities and preferences based on the videos you binge. Nothing particular new here, right?

TikTok knows what device you’re using, your IP address, your location, your search history, what you’re watching and for how long, as well as the content of your messages. It also collects device identifiers to track your interactions with advertisers. In the United States, TikTok is capable of collecting biometric information including face and voiceprints.

This data is “extremely valuable” for TikTok and its advertisers, says Morgan Wright, chief security advisor at security company SentinelOne. “If someone watches a video until the end and gives it a like, TikTok can serve up tailored ads based on that. Capturing sentiment with this level of accuracy is harder on other platforms.” 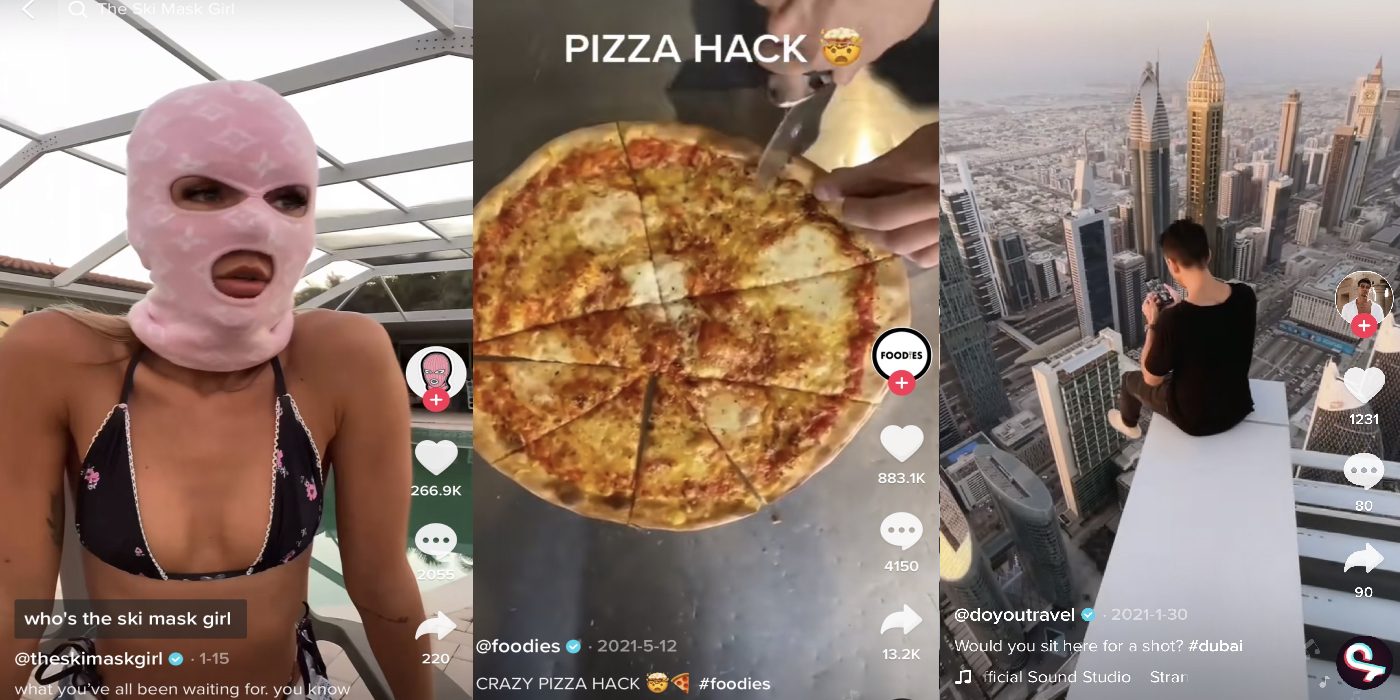 TikTok’s older sibling Instagram has proven in the past that garnering a large social media following without showing your face is possible. In fact, some of the most successful pages out there have been the travelling, Wanderlust types, where the influencer takes a back seat to the spectacle they’re sharing with the world.

Lifestyle, travel and fashion influencers alike tend to protect their faces. @doyoutravel sometimes includes his face in his content but he’s always pretty far away, or with his back to the camera. His stuff has 4.6 million likes.

@Poochofnyc, which originally found fame on Instagram, makes a dog the centre of attention while still racking up engagement and likes. The so-called “Bob Ross of Dogs” has 213k followers and 3.8 million thumbs-ups across its videos.

Another sneaky way around anonymous influencing is to wear a mask. That way you’re not confined in what you can make and people will go, “Hey why is this person wearing a mask? What’s their story? Who are they? Should I buy a mask?” It’s a win-win. For reference, check out @theskimaskgirl who has a whopping 2.9 million followers on TikTok by donning a mixture of balaclavas and bandanas.

So while it might be naïve to assume hiding your face from your TikTok grid is enough to shelter you from the ills of social media cookies, some of you may still want to do it if anything just for peace of mind.

Perhaps you’re fine with TikTok possessing your data and all you want is for people to not judge you by your physical appearance. That’s cool. There are plenty of genres of content out there whereby not showing your face is the norm. Here are a few… 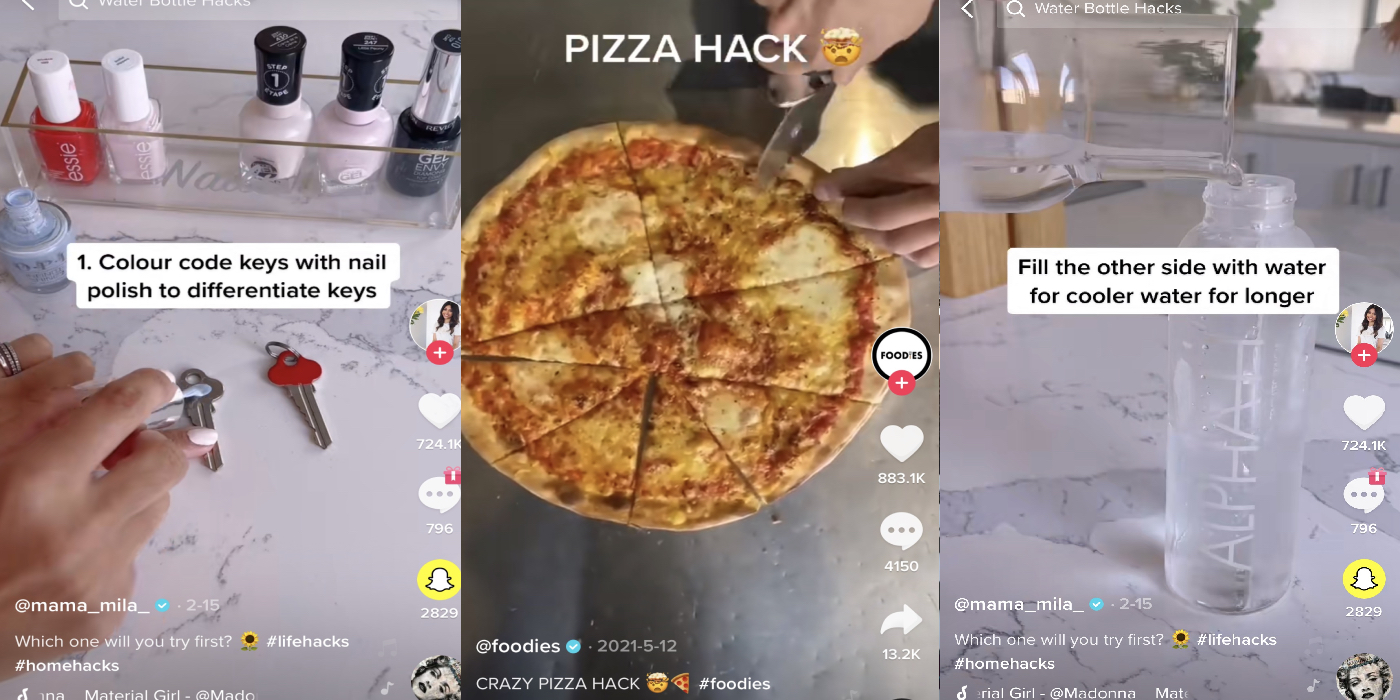 Life hacks are God tier faceless content. If you’re wanting to find out cheap and easy ways to speed up the daily activities of life, you don’t want to see someone talking to camera for ages. You want to see the hack.

The big hitters on #lifehack TikTok cover a range of interests, from colour coding keys with nail polish to differentiate them, or freezing a half-full bottle of water on its side only to add water later for an extra cool drink. There’s even showcasing how to cut a giant slice of pizza for yourself while maintaining its circular shape.

It’s this kind of stuff that separates us from the animal kingdom. If you’re looking to get into the life hacks game but need a bit of inspiration, go have a look at @mama_mila_ on TikTok who offers home tips like none other. With a following of 830k and video likes amounting to 10.4 million, Mila is living proof how obsessed we are with life hack content. 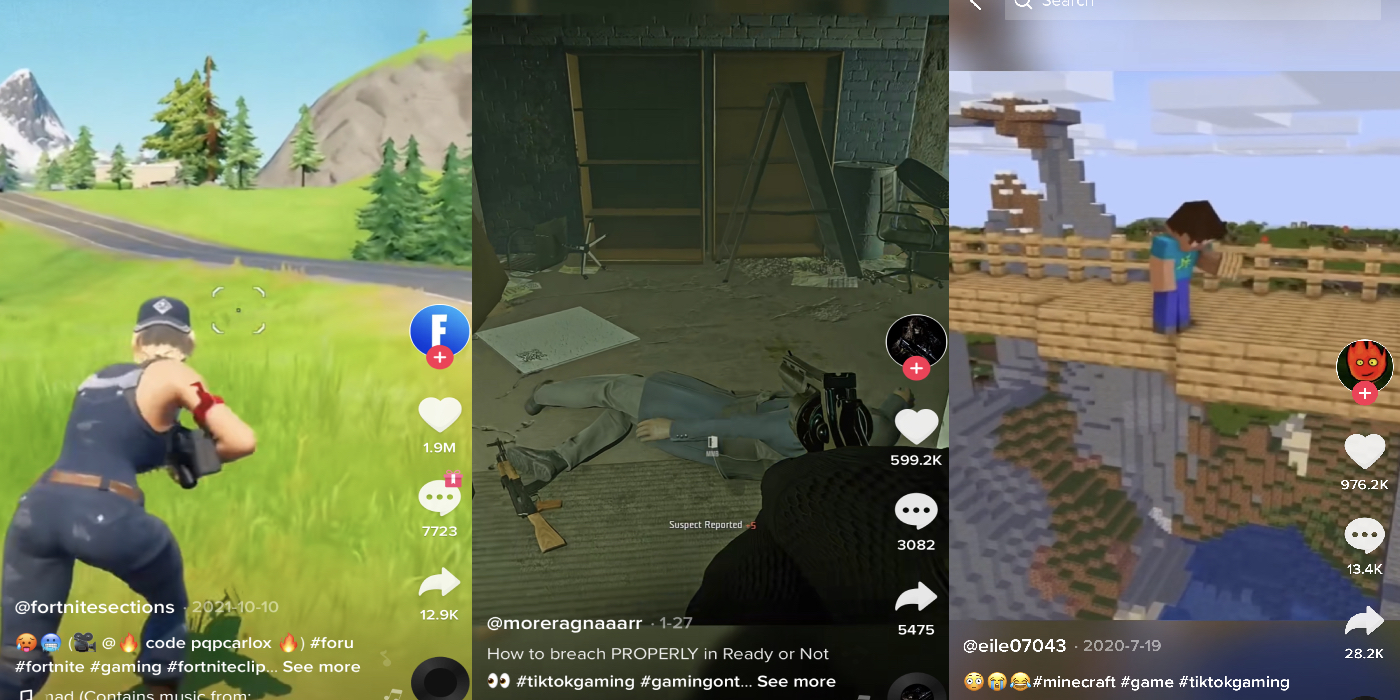 Although the star-studded likes of Pewdiepie and MrBeast have their roots in gameplay videos, it’s not uncommon to see gaming streamers embrace anonymity in today’s climate.

The gaming community, it’s pretty clear, can be very hostile. It’s a world in which people wear their hearts on their sleeves and talk out of their arses. This has made for some dicey interactions and beef. While often silly and short-lived, gamer frustration can lead to serious outcomes.

In August 2018 at a Florida gaming tournament, a participant named David Katz lost a game of Madden NFL 19, refused to shake the hand of his opponent and stormed off, only to return with two handguns, killing two and wounding ten others. You can see why budding gamers might shy away from revealing their identity to potentially dangerous strangers.

If you’re wanting to just screen record your gameplay and vibe, you do that. It works for many people. Hell, there’s a faceless gamer called Corpse Husband who is legendary among the community. Mostly for his deep, guttural voice. At the time of writing, he has 7.61 million subscribers. 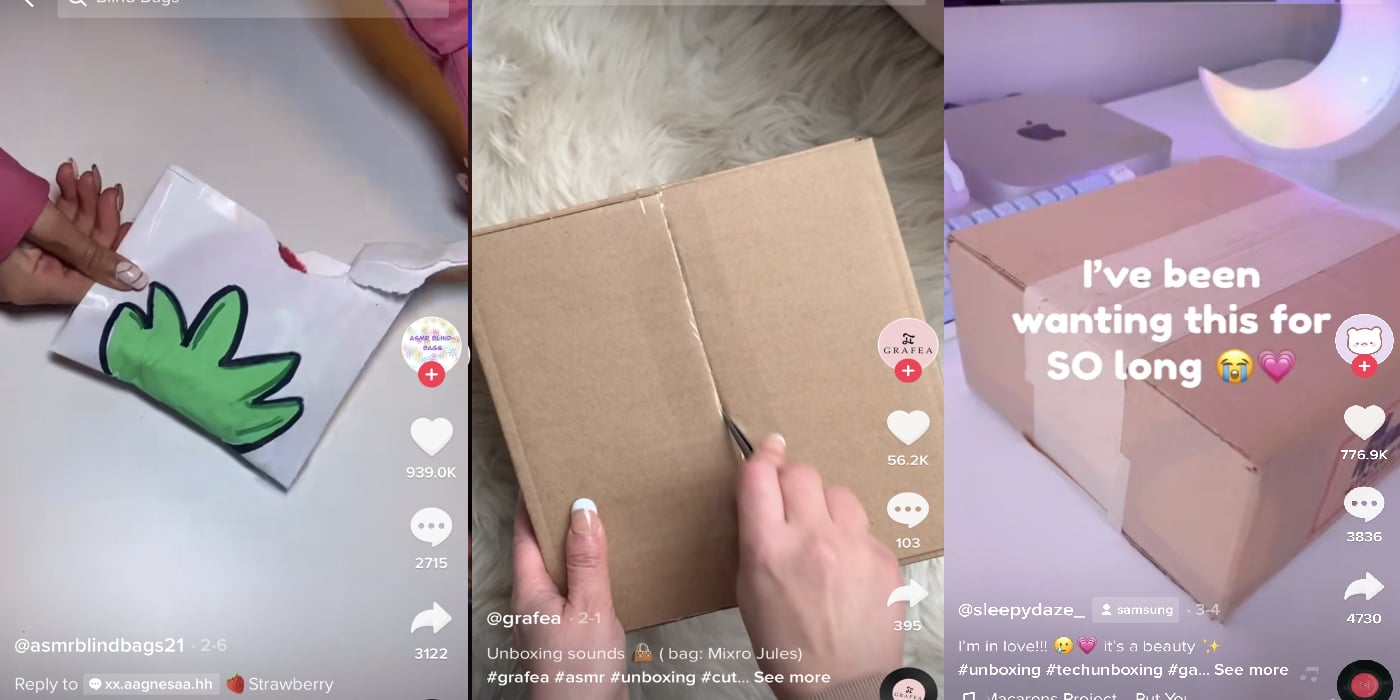 Unboxing is evergreen content. Simple to execute and people absolutely eat it up. All you’ll need to do is point the camera at your hands (not your face, remember), or shoot the action from a birds eye angle.

It doesn’t matter what you’re unboxing, we’re hard wired from childhood to enjoy the sight and sound of products being opened. So unbox a smartphone if you want. Unbox a fine china set. Unbox a robot sex doll. The public at large will thank you. And all that’ll be required of you is your voice.

The great thing about anonymous unboxing, too, is that you can be honest with your review. This isn’t to suggest that companies put out hits on unboxing creators that show their faces, but you’ll no doubt feel more comfortable slating an item when it’s just your hands and fingers (and out-of-shot voice) doing the talking.

One legend of this game is FunToys Collector Disney Toys Review, who do toy reviews funnily enough without showing their face. They have over 11 million subscribers! 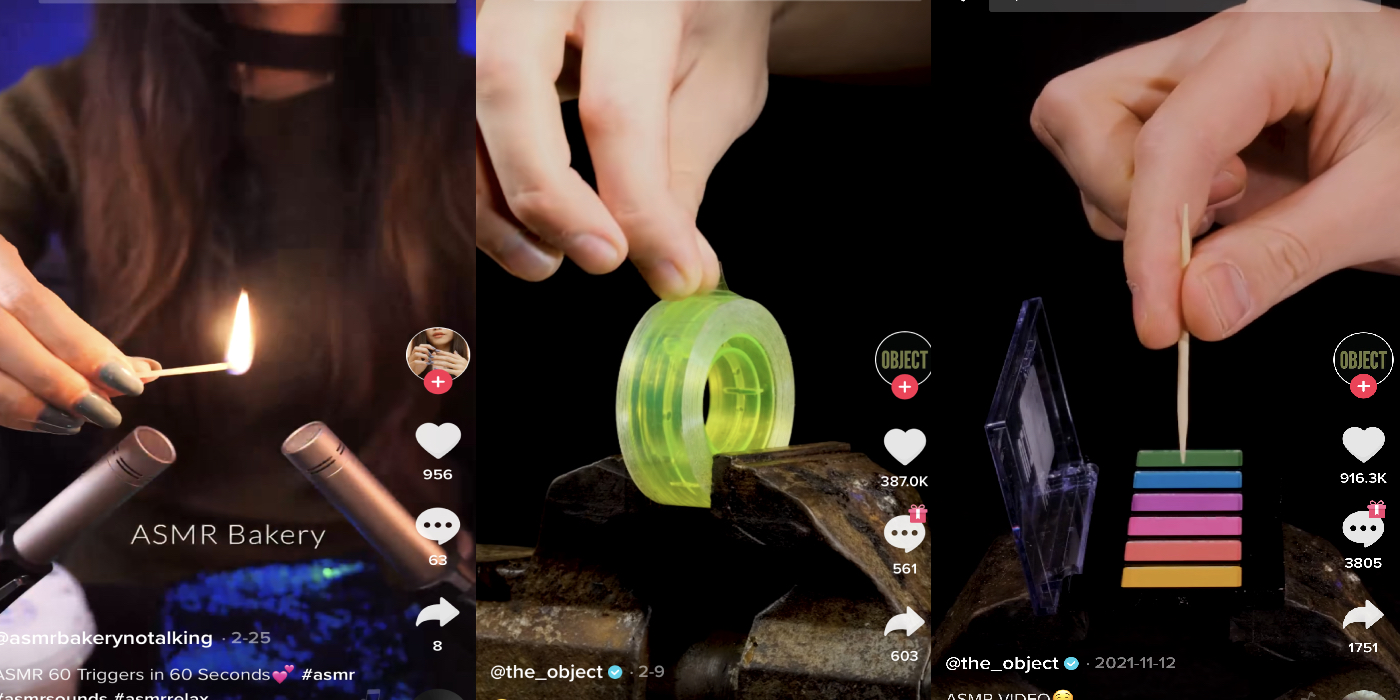 The unique thing about ASMR videos is that people don’t really watch them. Unless it’s a specific visual stimuli, things being sliced, washed, etc, it’s standard to fall asleep to ASMR. And to fall asleep to something, you have to have your eyes closed. If people’s eyes are closed consuming your content, your face isn’t necessary. Hooray!

You do get ASMR personalities whose image is the USP, a familiar face for users to return to. ASMRtists like Gibi ASMR, Gentle Whispers, ASMR Darling, ASMR Glow. These are the types of accounts that delve deep into roleplay videos. Cranial nerve exam, suit fittings, personal attention, that sort of thing. It’s not so much their triggers that consumers want to see as it is their faces.

Then there are the likes of ASMR Bakery, a behemoth of the community with 1.28 million subscribers who has never shown her full face. She doesn’t even talk, opting instead to rely on the use of her hands and other paraphernalia on for her triggers.

So all you need to become a hotshot TikTok ASMR creator is a good quality mic and some stuff to tap, scratch or caress. It helps that this is a very wholesome and welcoming online community by online community standards. 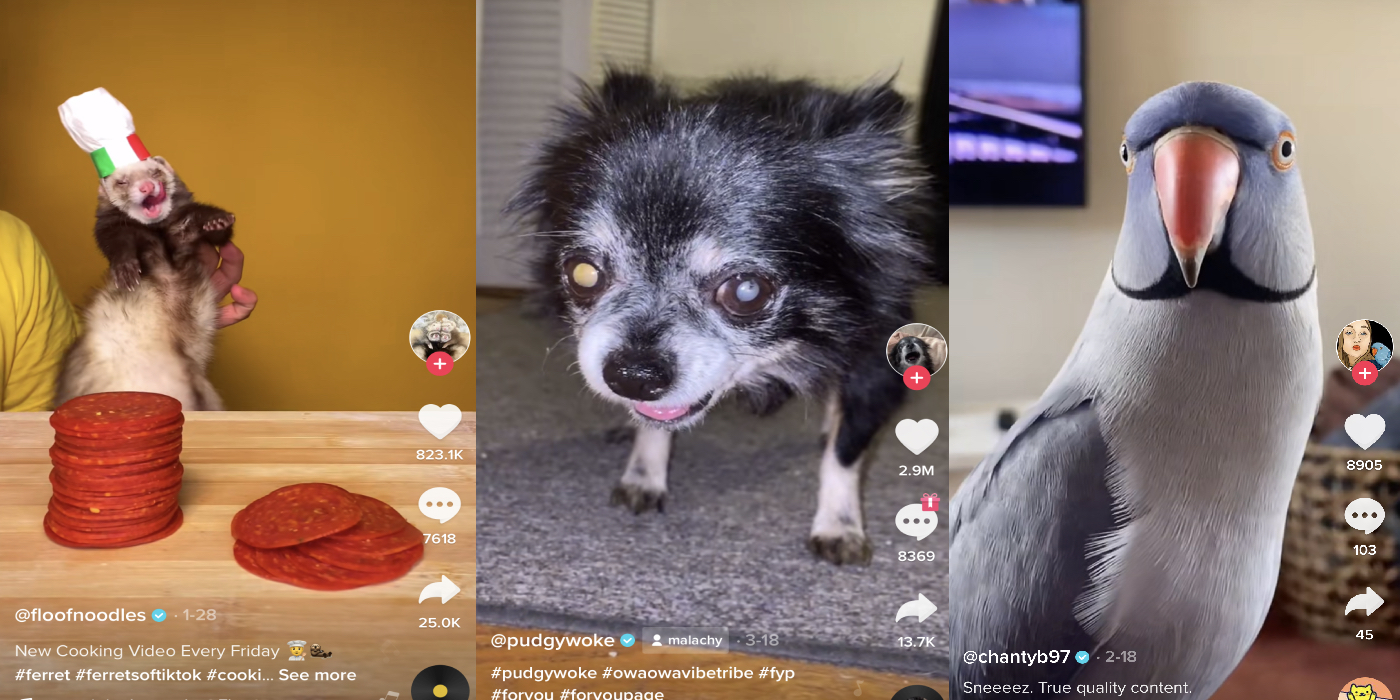 As we touched on with @Poochofnyc, an animal is a great way to propel you to online stardom while protecting your anonymity. Better yet, they do all the work. So you can just piece together their eccentric behaviour into little edits, whack them on TikTok and boom: fame.

There’s Matilda the Ferret for example, on @Floofnoodles who found TikTok glory after dancing next to a Pikachu toy in 2019. Since then, Matilda has danced to just about every charting pop song. Her owner is also known for dressing her in a little chef’s hat in cooking videos. She was 17 million fans on TikTok and 93.1 million likes.

Australian TikTok user @Chantyb97 can be thanked for introducing the world to Hamlet an Indian Ringneck bird who has entertained millions with their unique relationship, mostly driven by Hamlet’s usage of the phrase “What doing?” On the odd occasion, he will ask for a cheeky kiss.

It’s not all cutesy content. There were some animals, like Pudgywoke, a fearsome little Chihuahua, who got famous by being a bit temperamental. Pudgywoke went viral after owner Malachy James asked, “Can I get an Owa Owa?” and Pudgy responded by biting his headphone mic and saying, “Owa owa.” Pudgywoke sadly left us in 2021 but his memory lives on.