The top 10 cults on TikTok, ranked by craziness 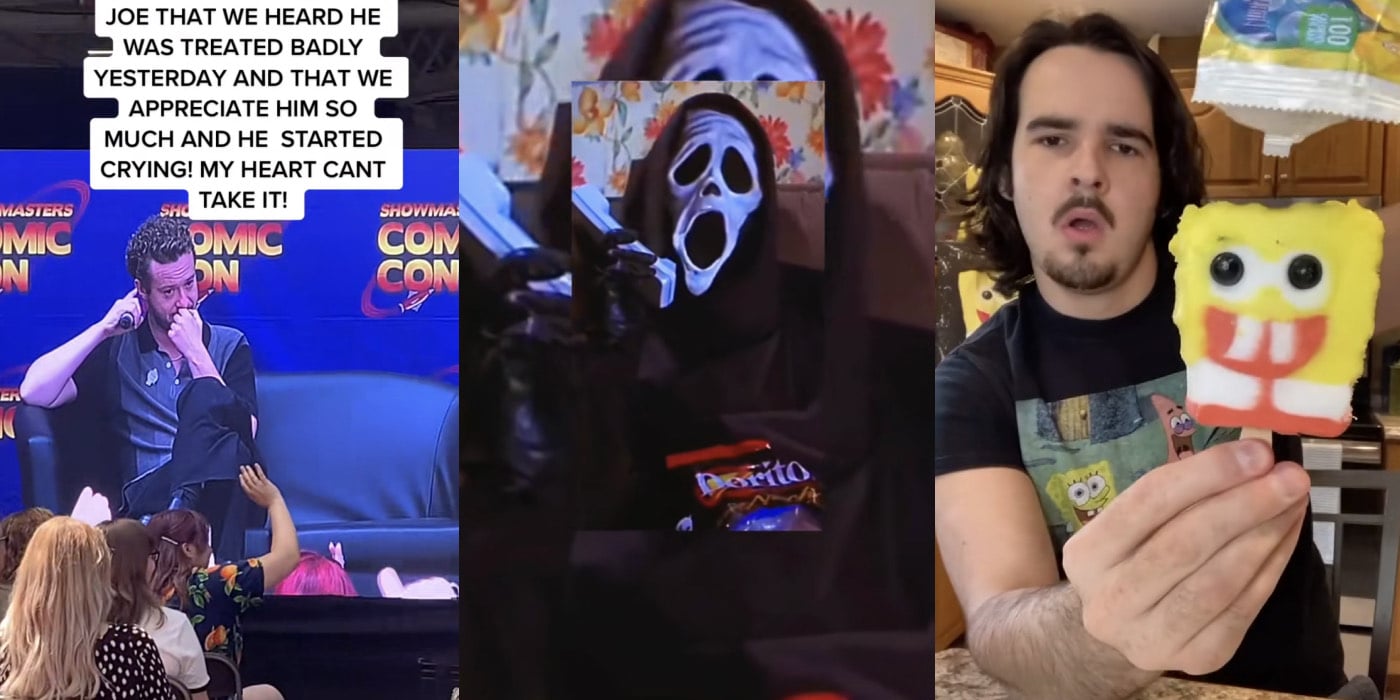 The longer a social platform lasts, the weirder it gets. Usually this takes a few years. With TikTok, it took months.

Since 2020, the TikTok cult has spawned some strange and brilliant communities. Some of these include the Santa Cult, the Lana Cult and the Spongebob Popsicle Cult. They have been brought back to the public’s attention recently thanks to a prevalent cult based on Stranger Things character Eddie Munson.

More often than not, these communities tend to stay self-contained, as TikTok’s algorithm generally does a confusingly good job of suggesting the most relevant content for each individual user. This means two people can use the same app but have totally different experiences in terms of the content they see.

Though a new trend sees some groups of people banding together to make their community stronger, spreading the message by copy and pasting messages in comment sections of unrelated viral TikToks.

How do you join a TikTok cult? 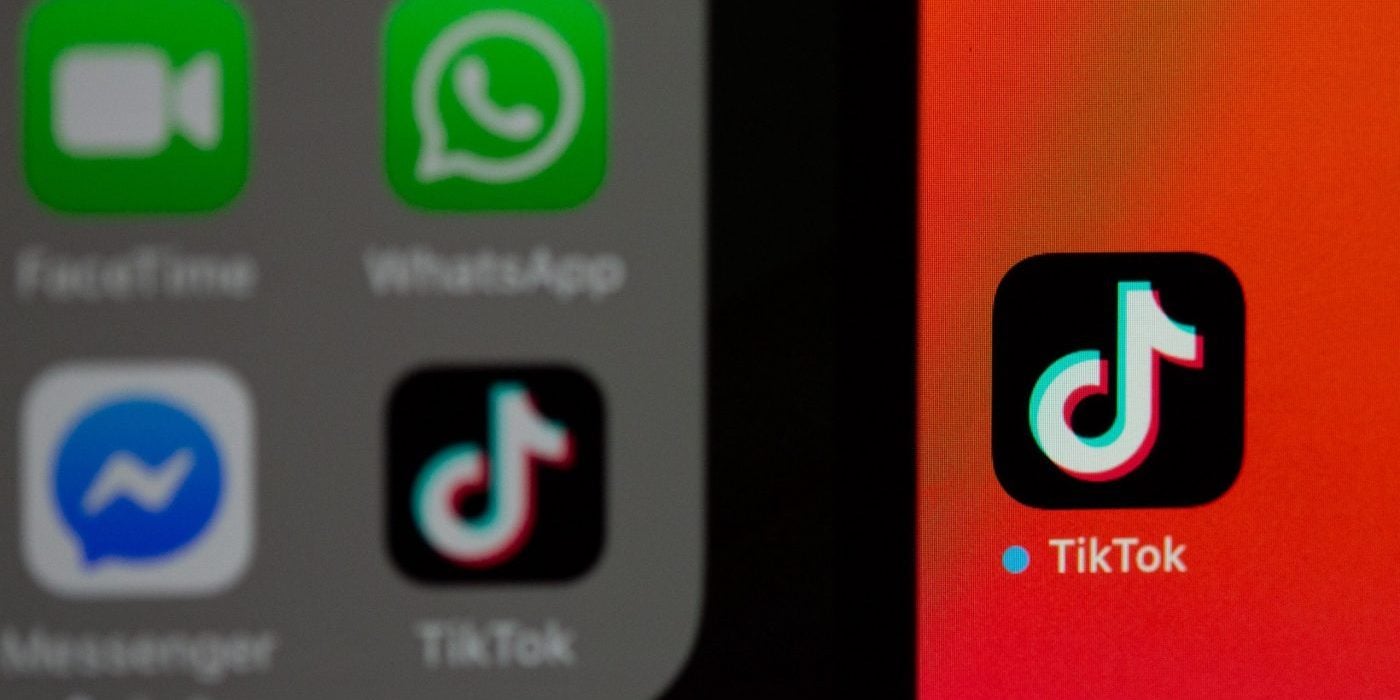 After identifying which community you want to be a part of, you’ll need to locate the picture that everyone is using as their profile picture. The images that are used are pre-existing memes, and shouldn’t be too hard to find on Google Images.

Once you’ve changed your profile picture, keep an eye out in comment sections of popular TikToks for other participants, and make sure to follow these accounts. As you begin to follow people you should have others follow you back. You can speed things up by posting comments yourself.

Why do people join TikTok cults? 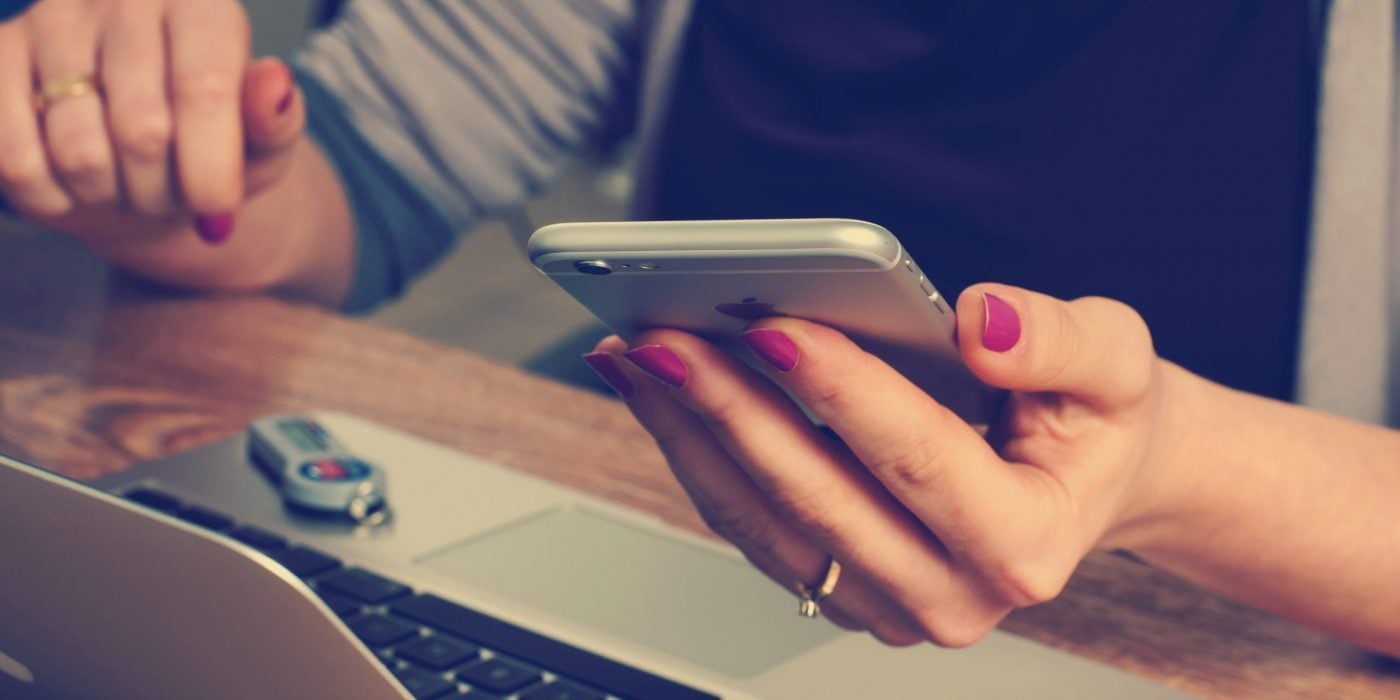 The purpose behind TikTok cults is innocent compared to cults we’ve over the course of history, with most users wanting to make friends with whom they have similar interests. Thanks to most members of a TikTok cult sharing the same profile picture, participating in the trend, and making connections with like-minded individuals, becomes much easier.

Posting comments promoting a certain cult under popular videos can be a great way of “recruiting” people or just shedding light. TikTok cults have proved a huge success for TikTokers looking to not only find solace in a throwaway community but boosts their own online presence and influence. 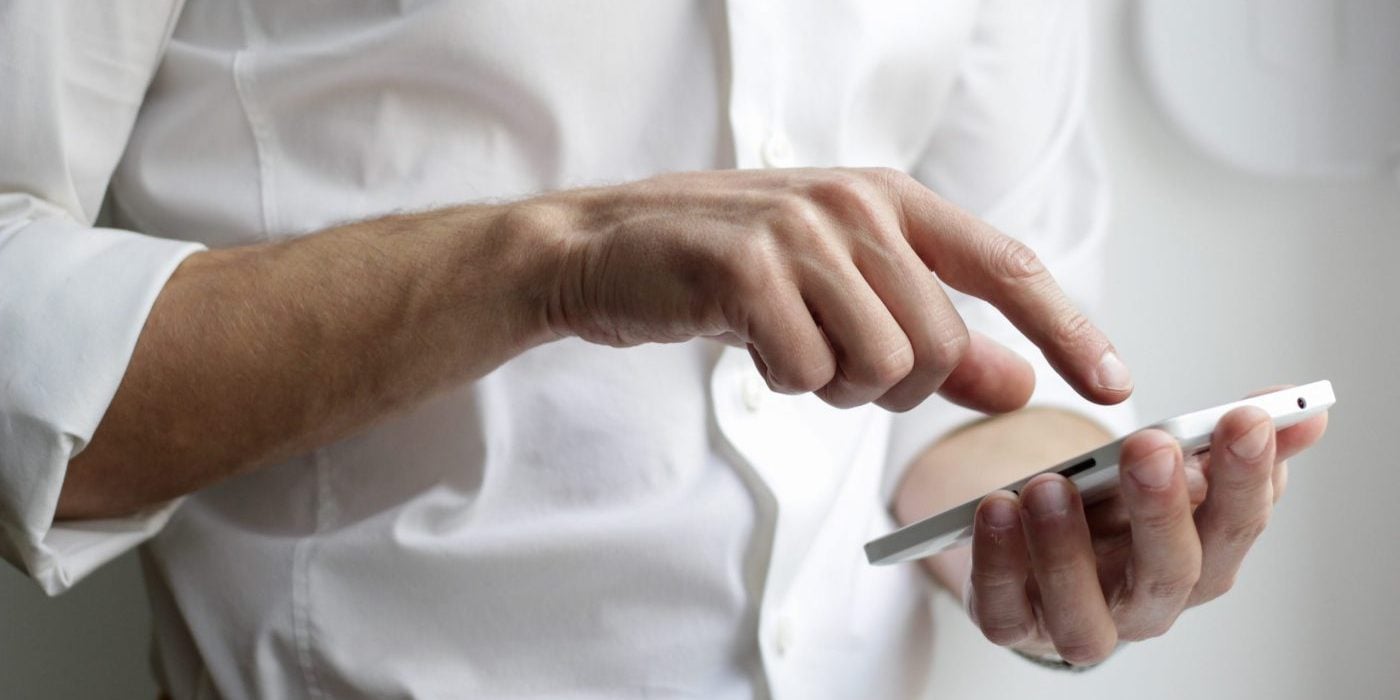 Author of Raising Humans in a Digital World and Cyberwise co-founder, Diana Graber told Parentology that younger users should understand that openly identifying within these cults might tie their digital identity to the groups, meaning they can then be associated with  any collective action or ideas expressed by the group to the individual user.

“I think all teens/young people should think about who they follow,” she said. “They should use digital tools to research the person behind the messages they see and then ask themselves if associating with this person online brings value to their digital reputation, or not.”

While TikTok cults have yet to prove themselves to be anything but mildly problematic, it doesn’t mean they couldn’t devolve into something dangerous one day. As with any online trend, be sure to communicate with kids about the content they’re immersed in on a daily basis.

“Check in to see if any of these so-called ‘cults’ your kids might be following are asking them to do something harmful or foolish,” Graber said. “Talk to your kids about the wisdom (or lack thereof) of blindly following strangers online, or doing something because ‘everyone’ is doing it and the impact upon their digital reputations.” 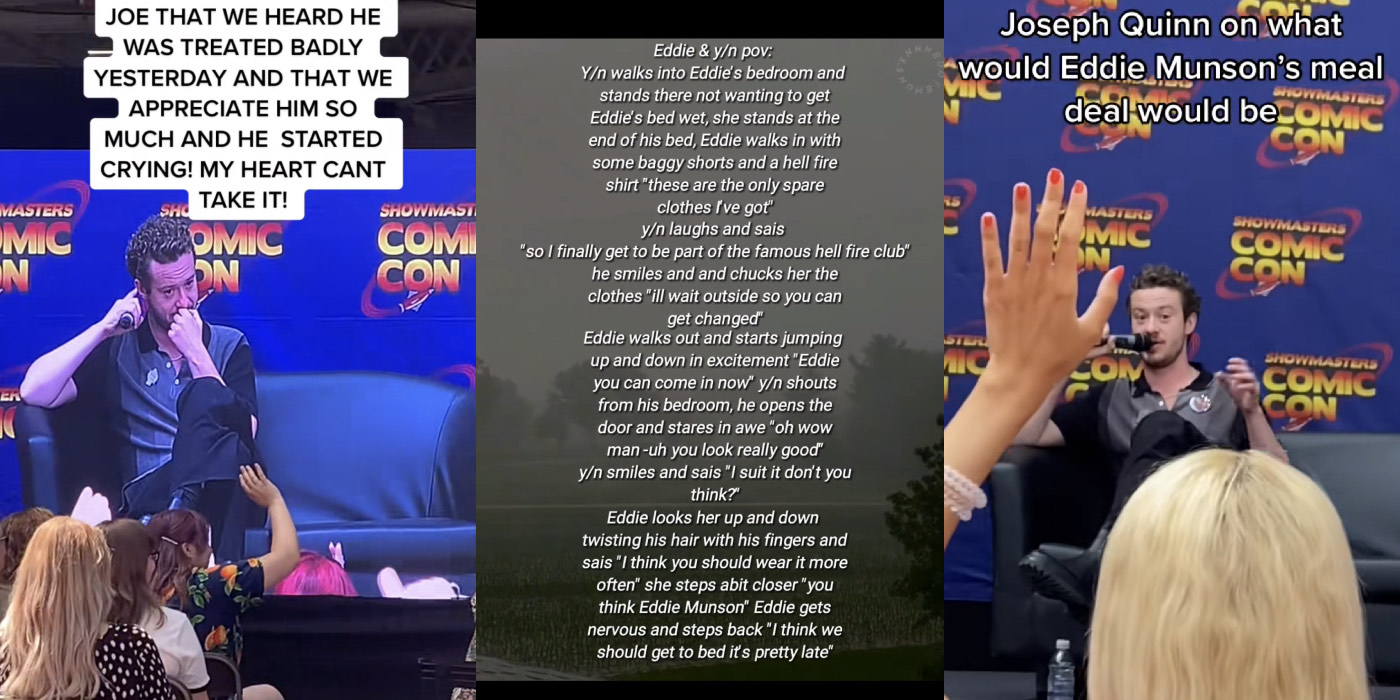 This isn’t the cult Eddie Munson tries starting on Stranger Things. This cult’s for Stans of Eddie himself. The D&D maestro was introduced to fans in episode one of season 4 of the Netflix show, becoming an instant hit with die-hard viewers.

In the show, Eddie is accused of murdering cheerleader Chrissie before helping the gang defeat Vecna. Members of the booming Eddie Cult have since rearranged their entire online presence to meet the demands of their obsession, even making songs from his dialogue, with mixed results.

Speaking about his character’s impact, Joseph Quinn (who plays Eddie) said: “I had no expectations. There’s a lot of emotions in the show. People really care about the characters, and the fact that they’ve found space in their hearts for a new character, and also the character that I play, feels kind of surreal. It feels very gratifying – but I think there’s a great beginning, there’s a great middle and a great end for the character. And as an actor you want characters with that kind of arc.

“So whilst it would have been great to come back for another season and get together with all those lovely people again, I think it was a brilliantly realised ending for a brilliantly written character.” 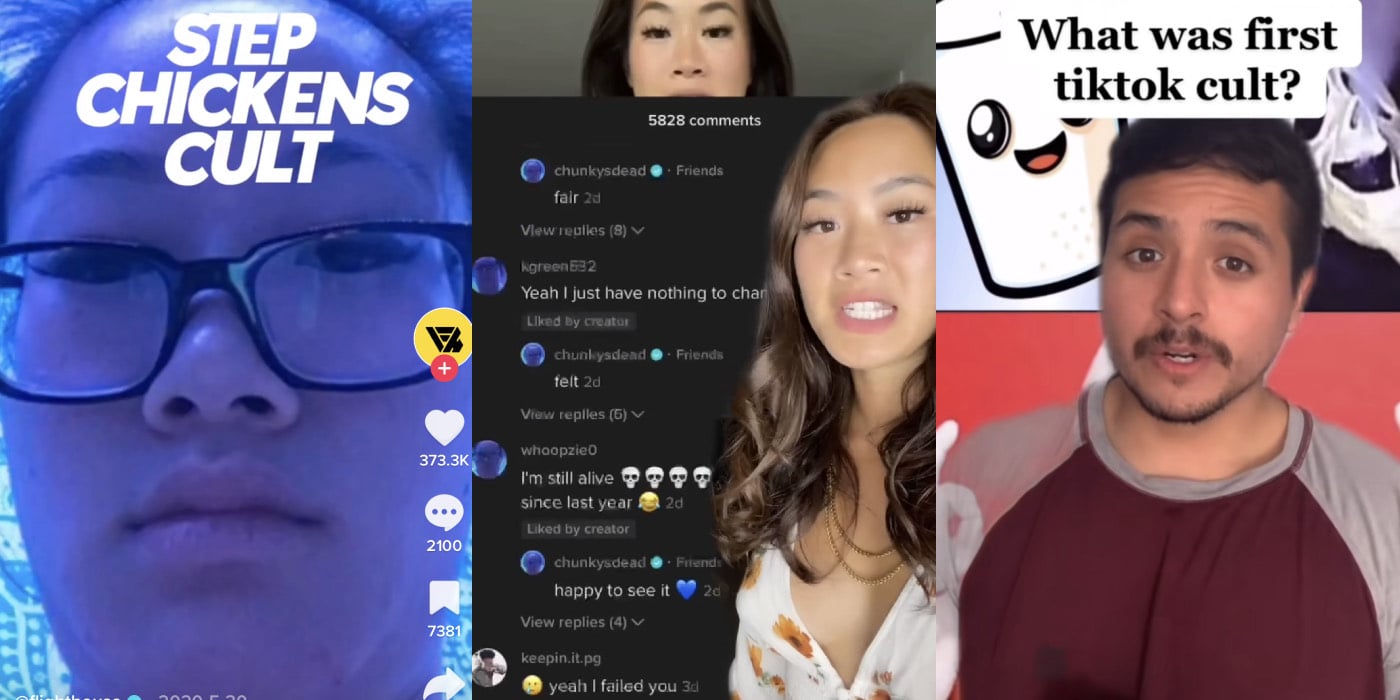 One of the most popular TikTok cults is the Step Chickens cult, led by TikToker @chunkysdead, AKA a 26-year-old named Melissa who posts dark and irreverent - not to mention highly inappropriate - content.

Step Chicken members have blue profile photos of a zoomed-in Melissa face to prove their devotion to the Step Chickens cult. It all started in early May, when @chunkysdead asked her fans to come up with a catchy name for her cult, with “Step Chicken” being the best apparently. Who cares? Look who’s laughing now! 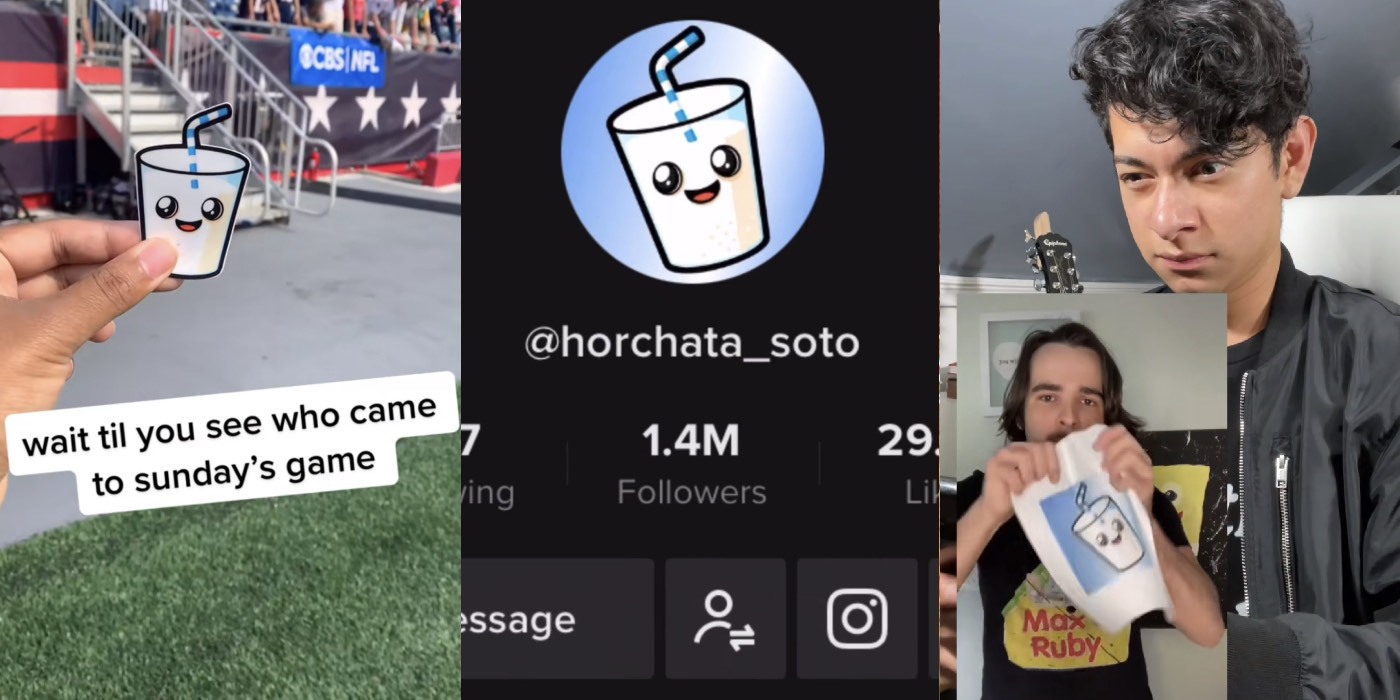 The Horchata Cult was created on April 25th by TikToker Horchata Soto. It’s focus was as simple as all the other cults out there, but less celebrity related. Horchata Cult celebrates a love of tacos and Hispanic food.

Jorge Soto, AKA Horchata, is a 19-year-old content creator from Rhode Island, USA who has 2.7 million followers on his profile. Since creating his own cult, the hashtag #horchatacult have had over 18 million views. Followers change their profile picture to a picture of a cup of milk with eyes as part of their initiation. 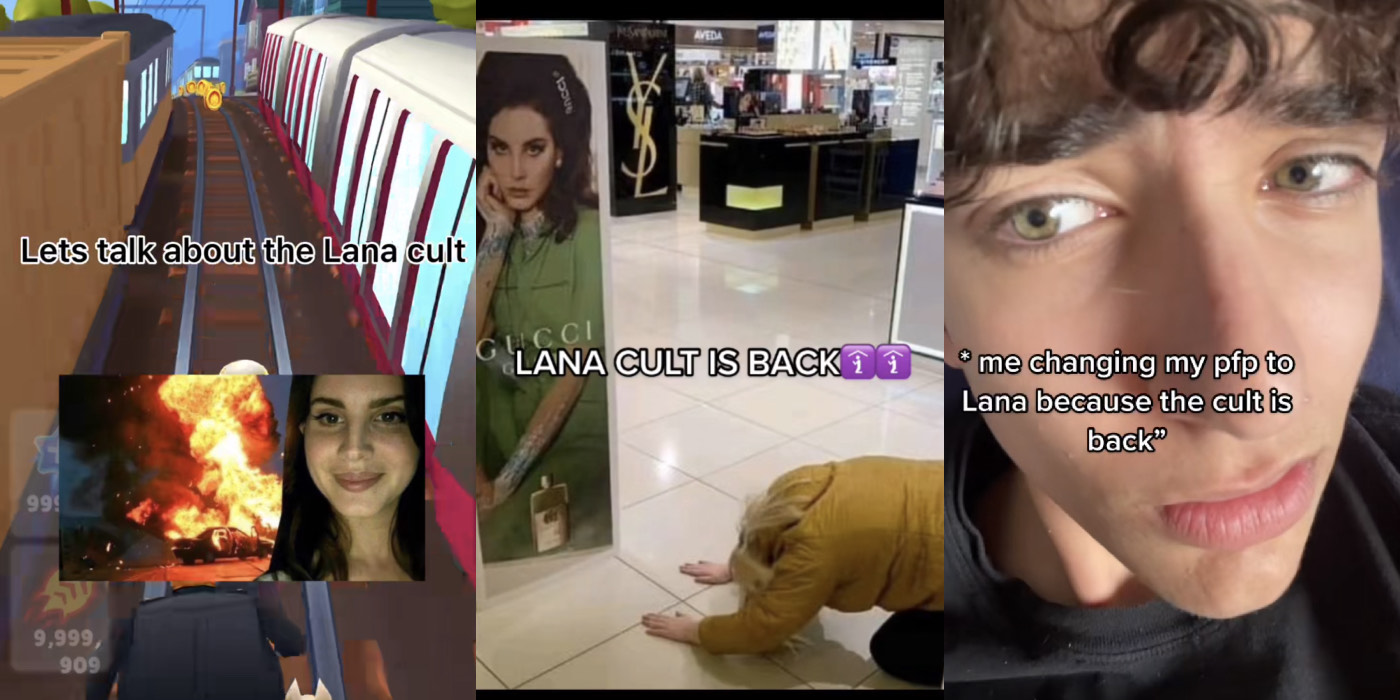 Fans of the 37-year-old singer-songwriter, who has released eight studio albums, change their profile picture to a photo of Lana’s face in front of a huge car explosion. Neat! Videos with the hashtag #LanaCult have had over 367 million views. 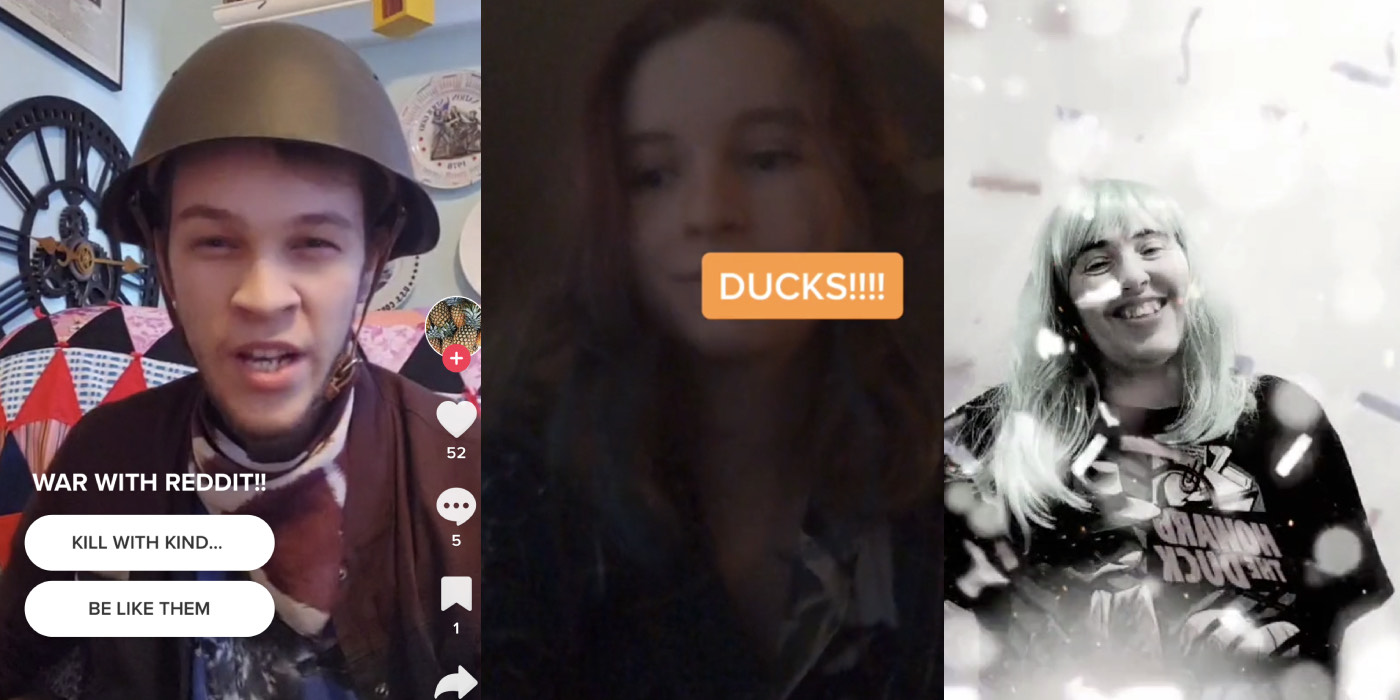 Some cults actively engage each other in regular spats over TikTok, where they fight to get the most visibility on a chosen video. While leaders discourage cyberbullying between members of rival cults, comments dragging members of other cults is seen as good old fashioned fun.

Enter: Duck Sanctuary, one of Step Chicken’s fiercest rivals. And by all accounts, devotees of ducks. Don’t ask me to elaborate. 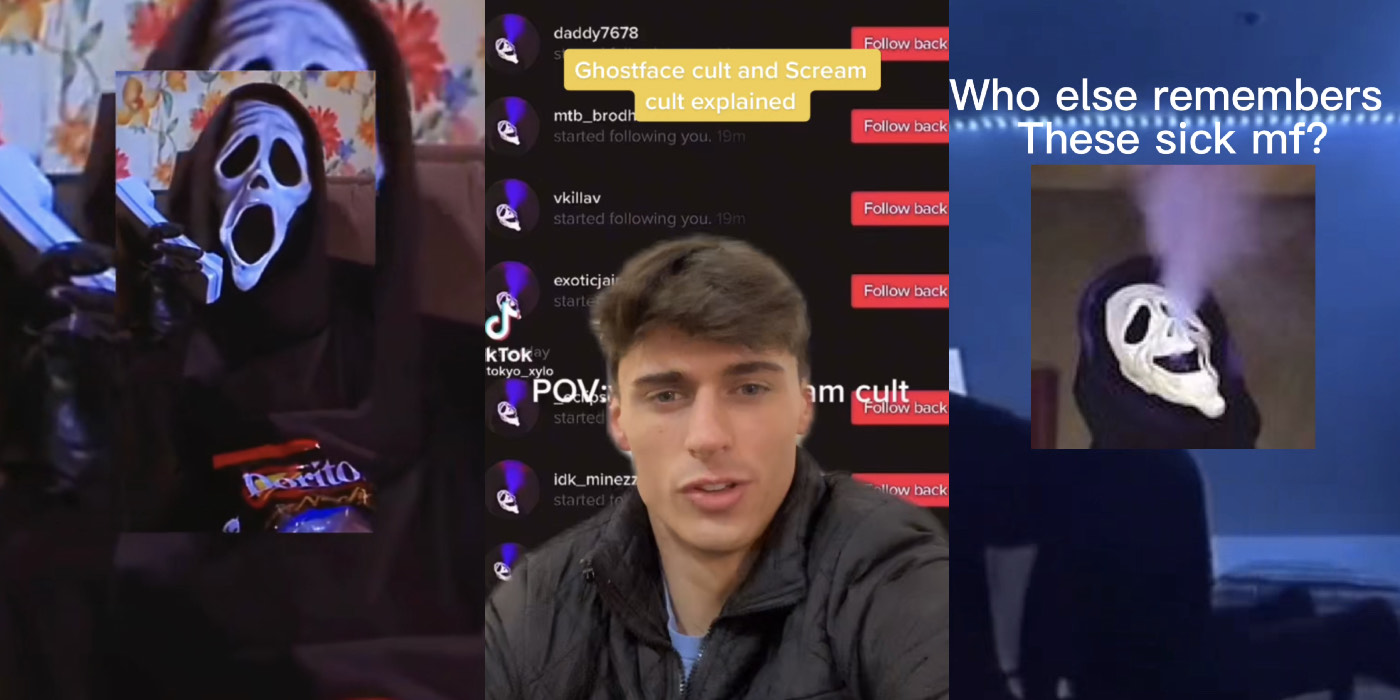 In 1996, horror fans were introduced to Ghostface, the killer/killer’s of the Scream franchise. Four years later, the film sending up slasher films was sent up by the Wayan brothers in Scary Movie. Their Ghostface parody was physically useless, distracted by frat bro culture and prone to smiling. In 2022, that parody is now the subject of a TikTok cult.

Followers of the Ghostface Cult use a Scary Movie screengrab of Ghostface smoking weed to prove their membership. 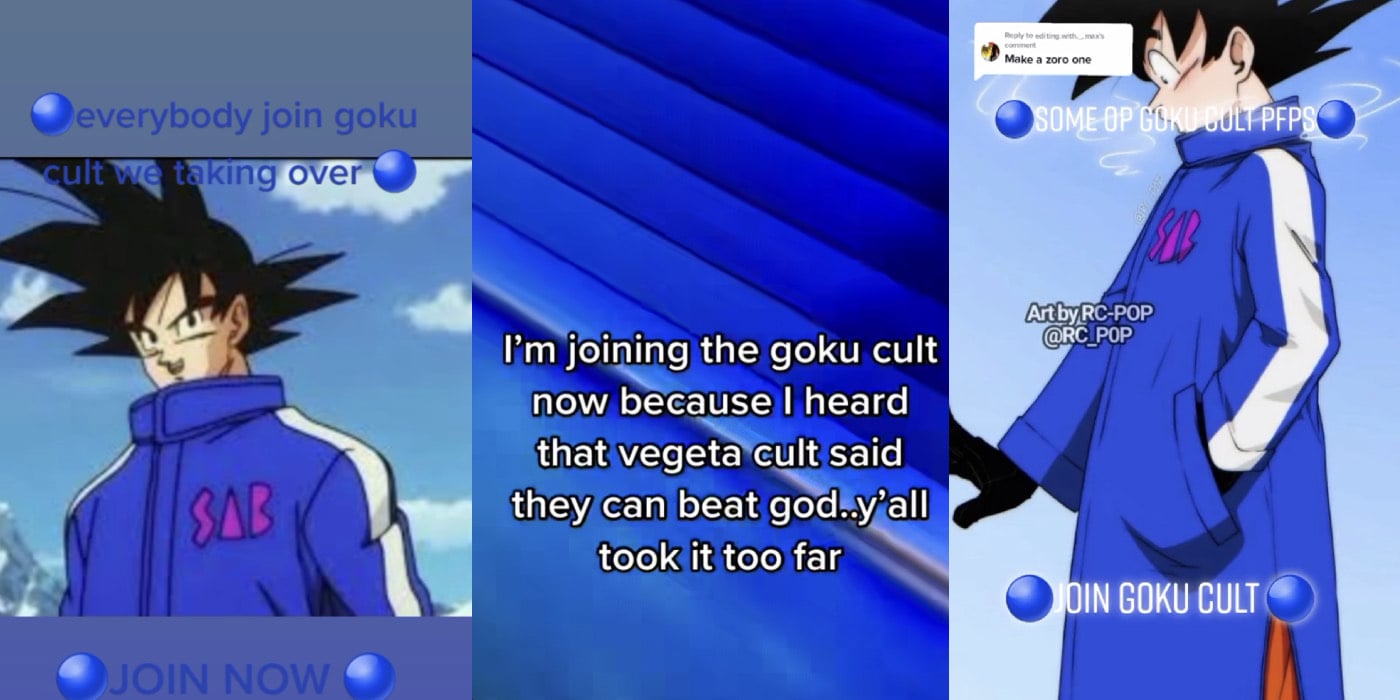 Goku is the main protagonist of the Dragon Ball manga franchise. A powerful warrior, who constantly strives to protect his friends and loved ones, Goku’s story is one of determination, courage, and overcoming stacked odds. He’s also just highly popular among young children and adolescents for beating up bad guys and being ripped.

His followers on TikTok are powerful, but more for their social influence than any actual strength. Still, this one’s a goodie. 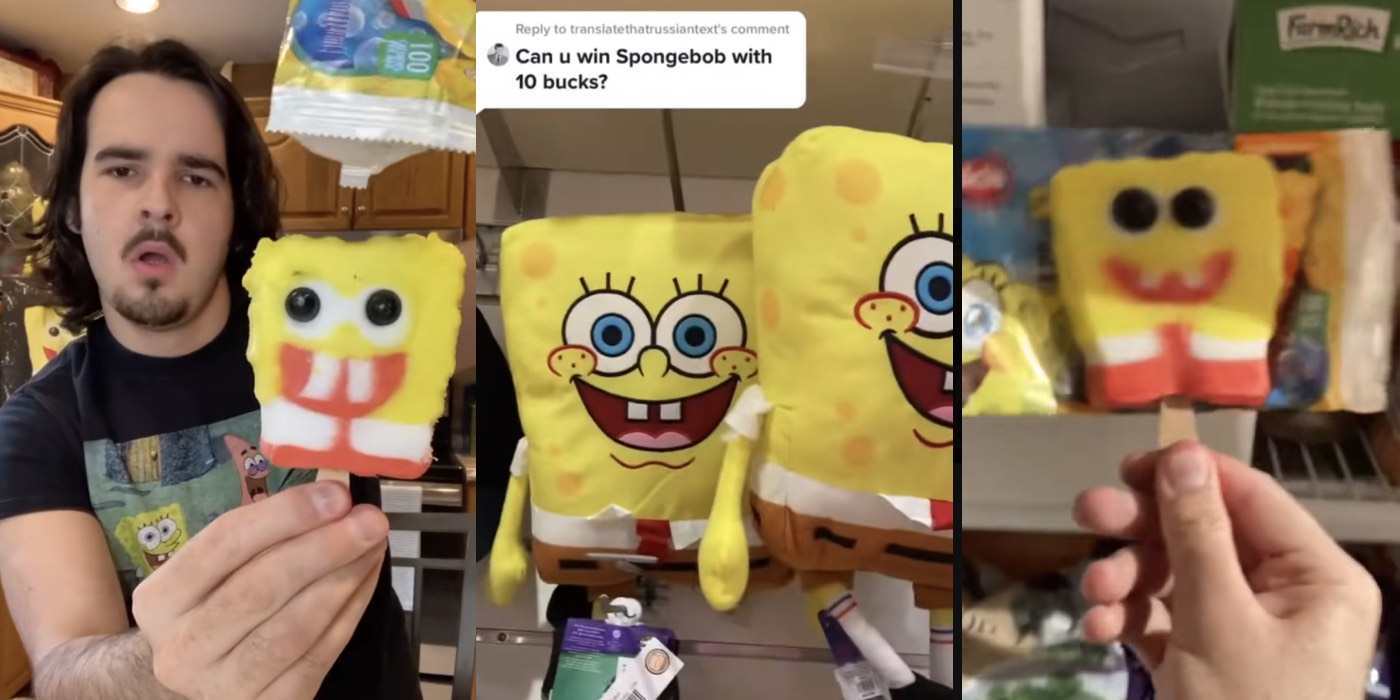 That’s right. you read that right. And those pictures above, you’re seeing them right too. All of it’s right, despite being wrong. The Spongebob Popsicle Cult is a cult devoted to a popsicle of Spongebob Squarepants, a pop culture phenomenon and evergreen meme.

Most of the content revolves around followers buying the popsicles in the hopes of finding ones that don’t look horribly deformed and hilarious. 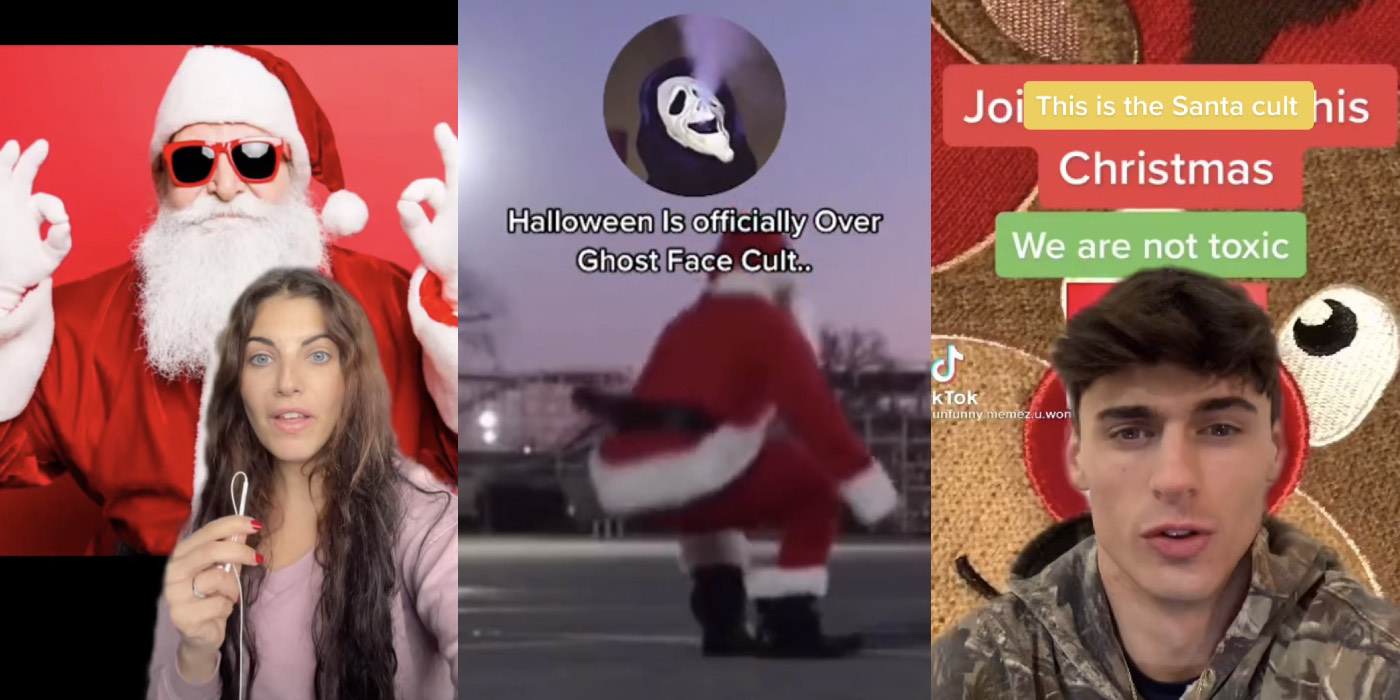 The Santa Cult was allegedly founded after the Ghostface Cult became “a little toxic” according to TikToker Noah Glenn Carter.

The rules of the cult are simple. Change your picture to a stock image of Santa Claus wearing sunglasses making an OK sign. Follow anyone else with the same picture, then keep it until Christmas Day. For some reason, the cult ceases to function on what you imagine would be its most famous day. 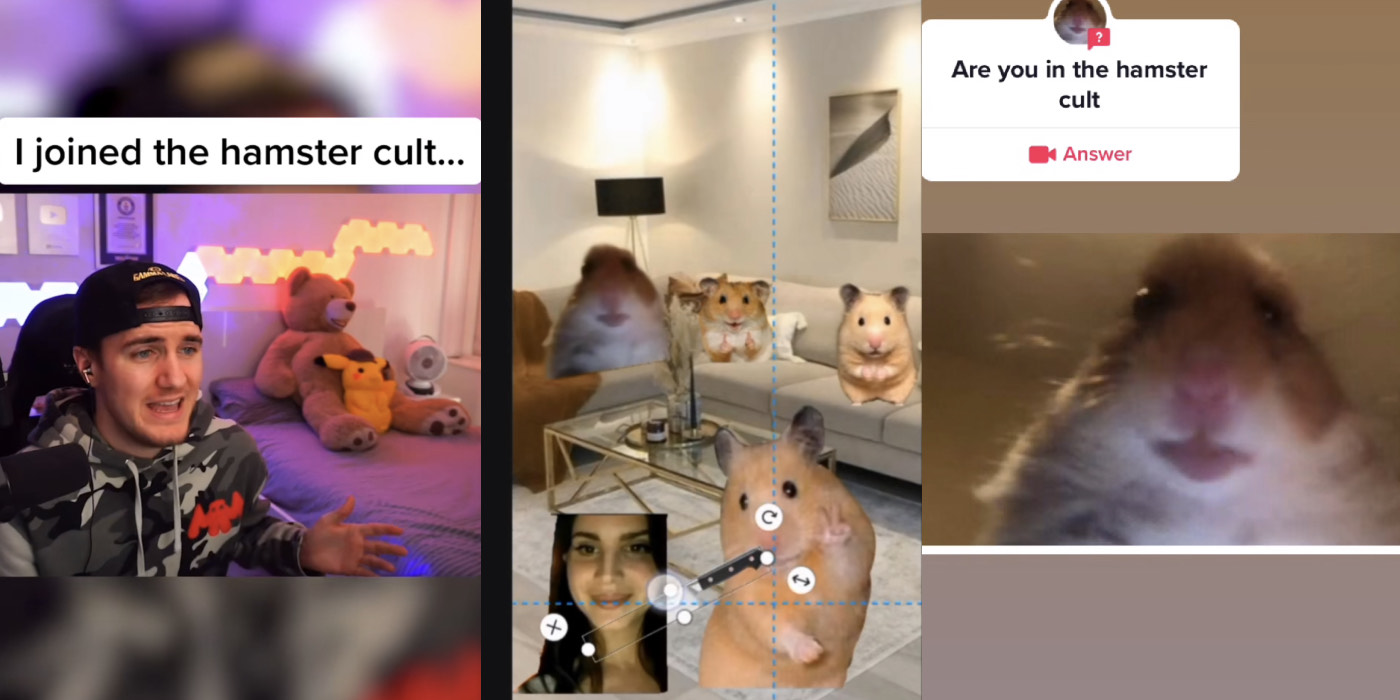 At this point, if you don’t get the drill then what are you still doing here?

The Hamster Cult got its following through spamming Lana Del Rey videos, discouraging TikTok users from stanning Lana Cult instead of the new, wholesome Hamster Cult. “JOIN THE HAMSTER CULT,” they wrote. “WE DON’T MOCK GOD OR BURN BIBLES.” Apparently Lana Del Rey was known for mocking God and burning bibles. We don’t know who to believe. Personally, I’m into the Santa Cult.