The worst examples of TikTok cringe, ranked by awkwardness 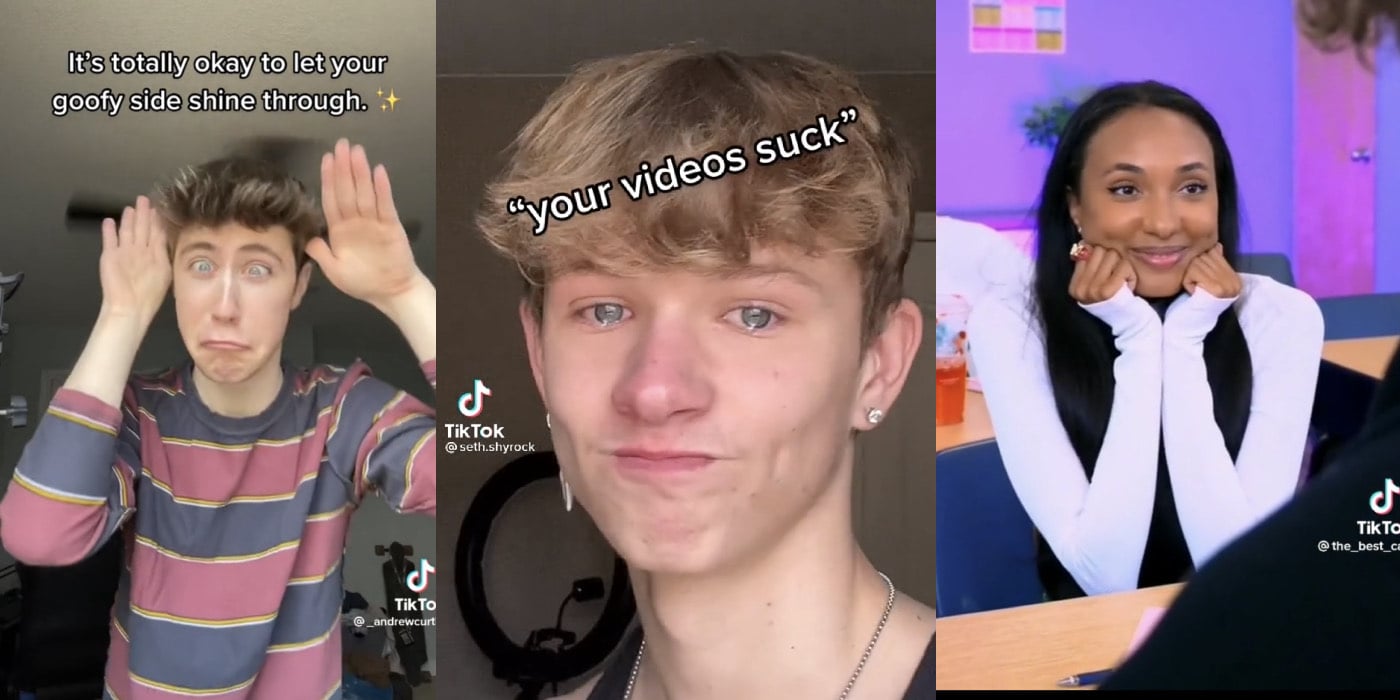 Although there wasn’t always a name for it, people have been cringing since the dawn of man. It doesn’t matter what or who you are, it’s near impossible to control the involuntary bodily flinches and bends that are triggered by seeing or remembering something embarrassing. The word can be traced back to the Old English word cringan, meaning “give way, fall (in battle), become bent.”

Today, cringe is an everyday part of life, a meme. Used as both adjective and noun, content deemed humiliating on account of someone’s looks, behaviour, or talent, is chalked down as cringe. The most popular type of cringe content is made by people who are truly lacking in self-awareness and surprised by an audience’s hysterical reaction to their video.

There are two outcomes to posting cringe content. Either they get mocked into anonymity, remembered only for the one piece of cringe they thrust onto the world’s stage. Or they embrace their viral fame and build huge fanbases of support which can eventually translate into a successful career. A shining example of this is Rebecca Black, who gained a throng of stans after being lampooned for her cringe pop hit “Friday”.

Cringe is vital to social media. As Taylor Lorenz explained at the Atlantic in 2018, “For a social platform to successfully grow, it must reach the confused parents, the people who don’t quite know when the camera is recording, the ones who get a little too personal, or who aren’t Instagram-influencer attractive but have the gall to put themselves out there anyway.” The TikTok algorithm is at its greatest when regular people’s content is broadcasts to millions of people. Regular people never predict going viral and are therefore more willing to put their reputation and dignity on the line, much to our amusement. Below are ten examples of CringeTok that will either have you questioning or justifying your membership of the app. 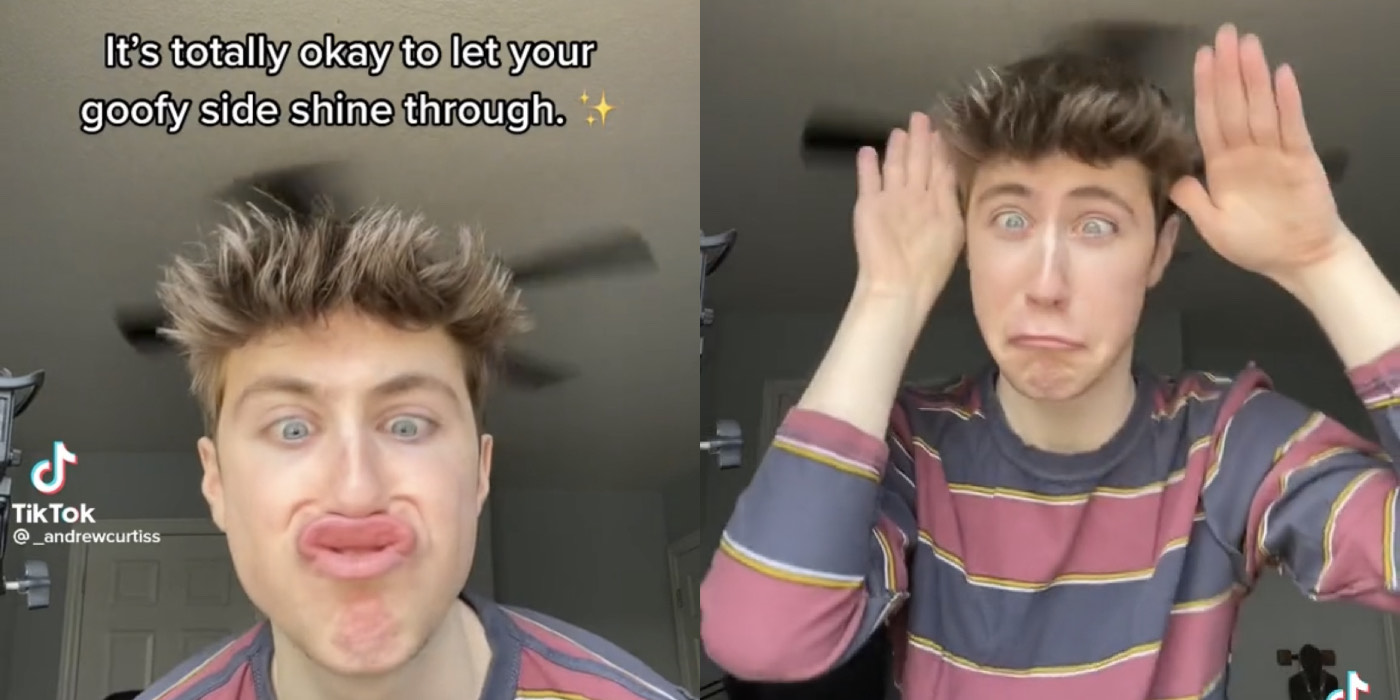 Peak millennial humour, here. Silly, quirky faces, to those of us born in the 80s and early 90s, qualified as comedy. Something deserving of praise and hysterical laughter. By deliberately going cross-eyed or sticking your front teeth over your bottom lip, you were saying to your followers: “Think you know me? Think again. I’m kinda weird :P”.

Today, that humour is usually only referenced by Zoomers making fun of it, which they have every right to do. This is a stain on our legacy, our contributions to meme culture. This brand of humour, along with obsessions over which Hogwarts house suits your personality, can get in the sea and stay there.

You Meet the Car Mechanic 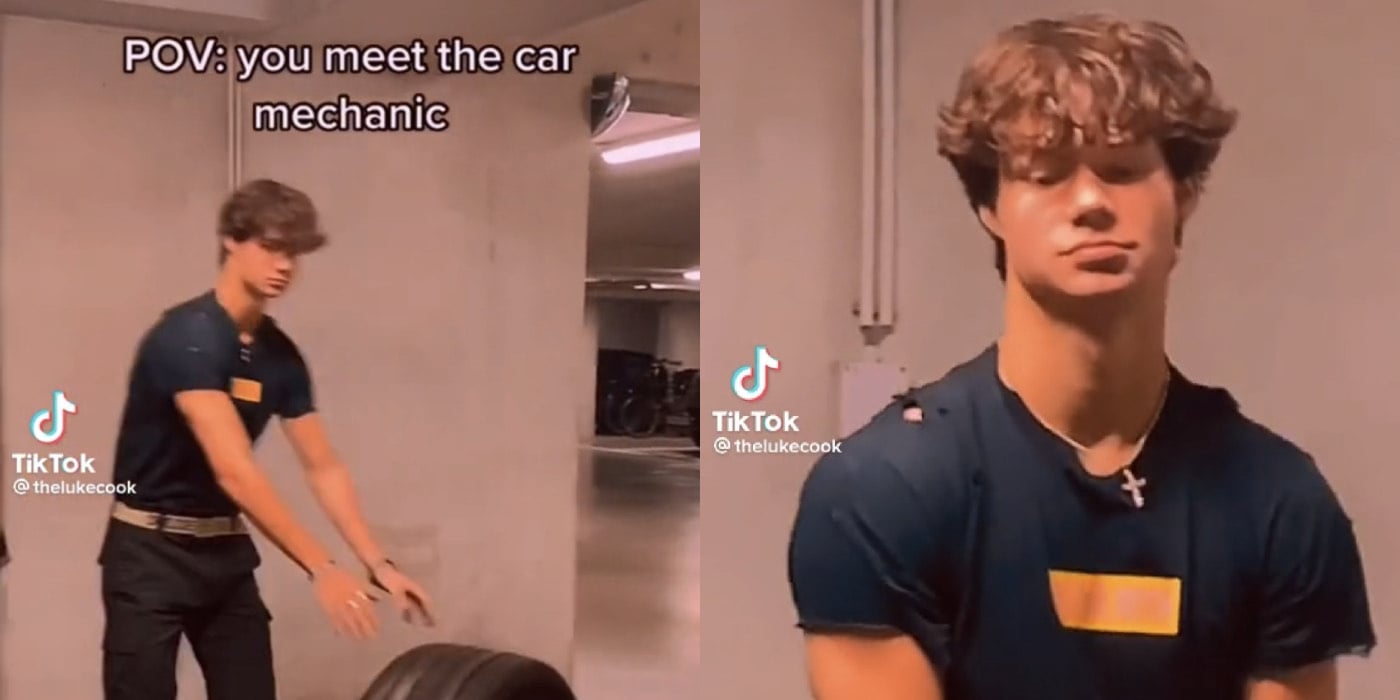 POV videos on TikTok reign supreme. The possibilities are endless, especially when you consider that most users riffing on the trend have no concept of what POV actually means. Endless fun!

Here we have one of the proper ones, where the POV tag actually works. Unfortunately, the result is still terrible. The viewer, you, walks up to a car - fresh from repair - in an indoor car park (where all mechanics ply their trade) only to run into the mechanic himself who just so happens to be a teenage fuckboi. 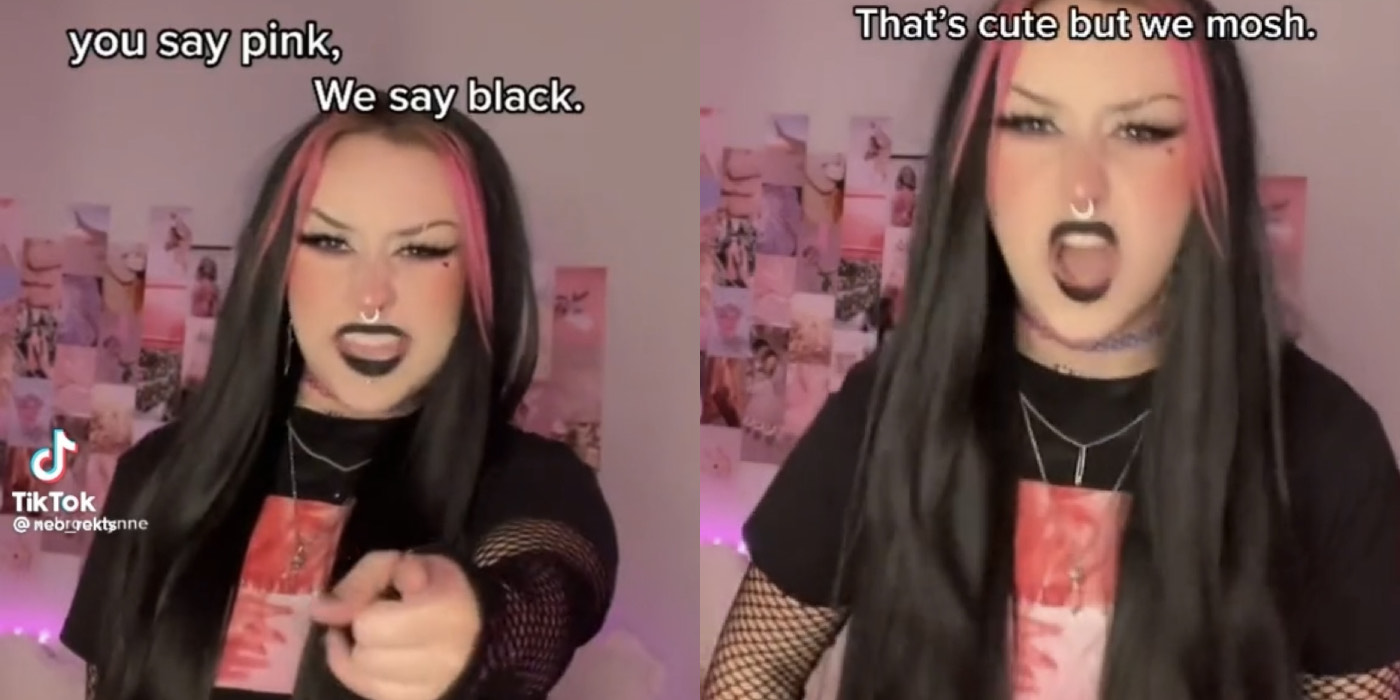 Cliques are popular when you’re younger. Choosing a subgenre of style and aesthetic is a way of standing out and being recognised. Haters say such sparse communities don’t exist in a largely homogenised society but over on TikTok, they’re thriving.

In this video, we see a girl bemoaning the interests of the normies around, miming to the audio: “You say pink, we say black. You say Bieber, we say beersack. You say emo, we say fallen angel. You say pop, we say rock. You twerk? That’s cute but we mosh.”

I Hate Your Friends and They Hate Me Too 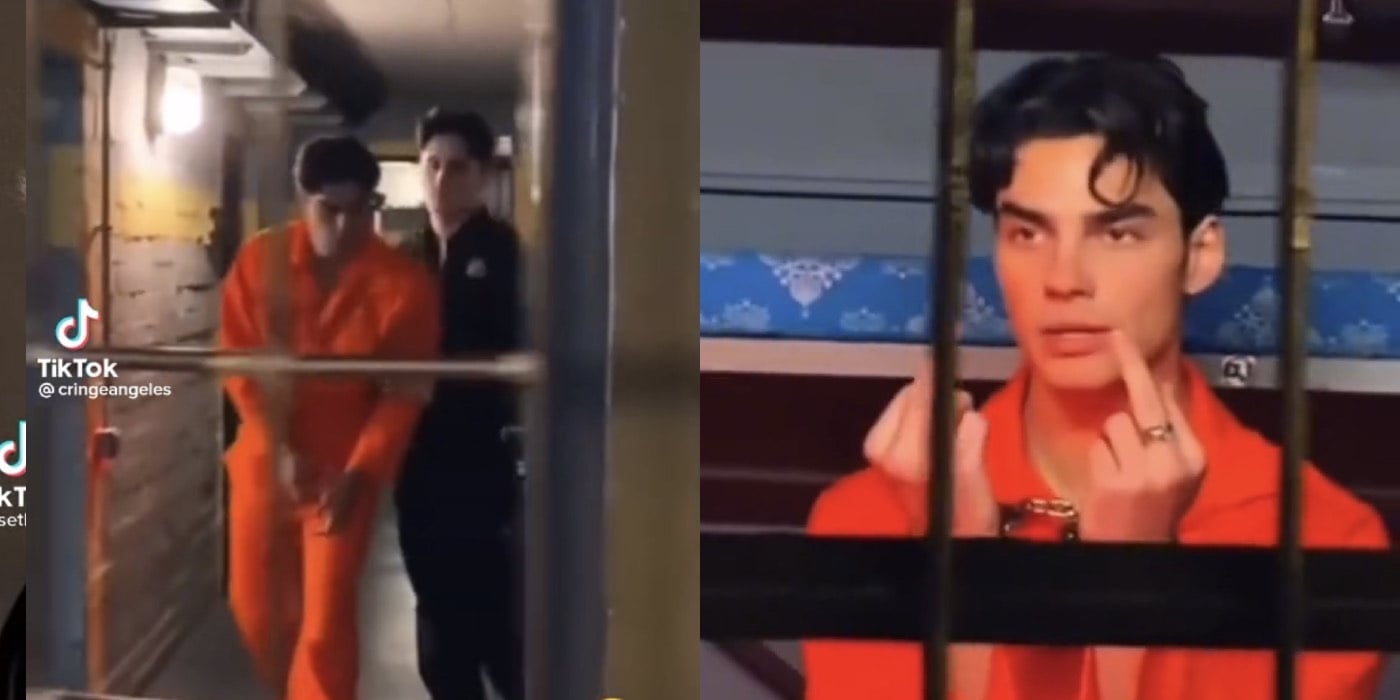 If there’s anything that strikes the fear into the heart of a prisoner it’s the arrival of a floppy haired e-boy willing to raise two middle fingers to the man, the system, and life.

In this TikTok we see an reconstruction of such a terrifying arrival. If your toes don’t curl at the sight of this, you’re the floppy haired e-boy that made this awful video. 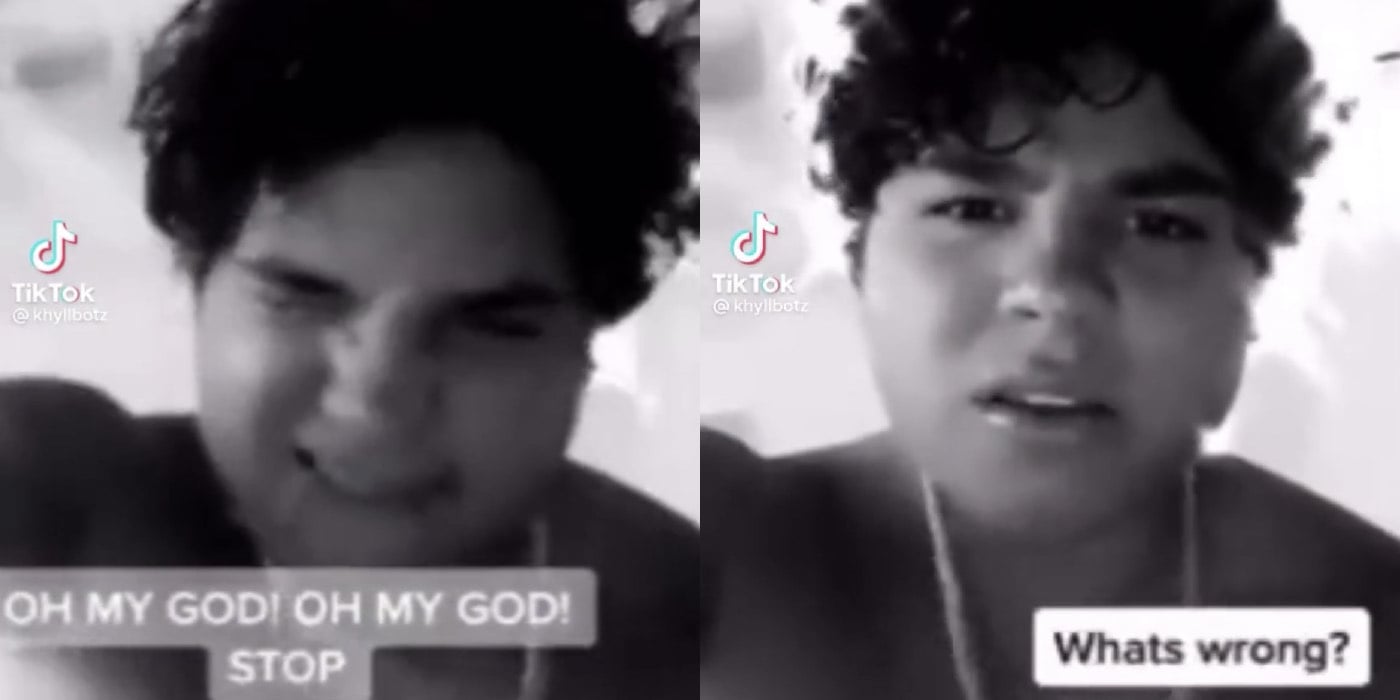 Ever wondered what it’d be like to get pounded by a random TikToker? Me neither.

Do not watch this video. Don’t feel tempted. You haven’t wondered so why wold you click? What would possess you to click if you haven’t wondered what it’d be like? Morbid curiosity? Try again. Not a good enough reason. I’m being serious, don’t expose your wholesome eyes to this TikTok, potentially the worst ever made, and there’s some bad TikToks. Scroll down to the next one. It involves DJ Khaled. It’s cringe but watchable. Whereas this one is cringe and unwatchable. A lethal combination. Save yourselves while you still can. Deliver yourself from evil. Please.

DJ Khaled forgets who Diplo is 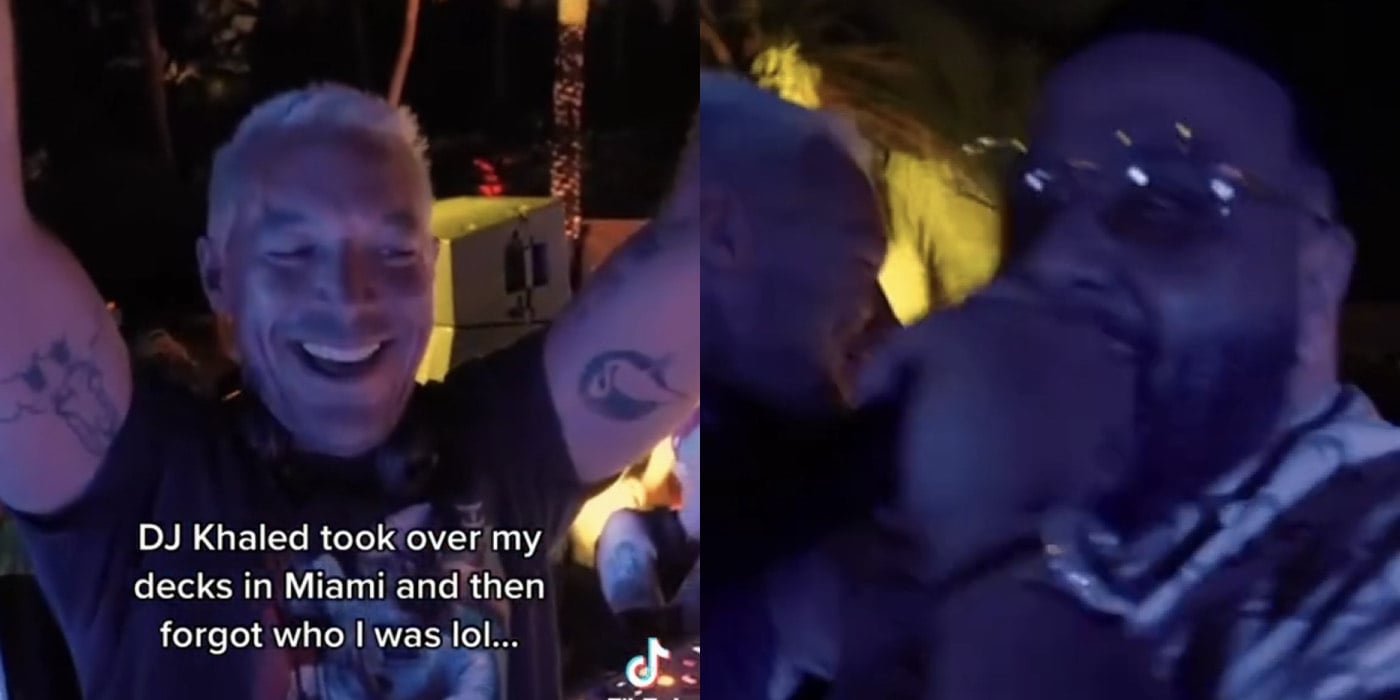 “Everybody who puts out great work loves greatness to come back. Now, am I driven by awards or other accolades? No. That I came from nothing, that I made it this far, and that I keep going and I keep growing - that’s what drives me. Being a father of two children drives me. Being a good man drives me - being there for my family and my children. I’m grateful for blessings that God gave me. Getting this star, that acknowledgment, is a blessing. Getting the call where you got a Walk of Fame star, a Grammy or a №1 album - I wake up every day saying that ‘We’re №1!’ So I am very grateful for the Hollywood Walk of Fame star, that sign of what I have accomplished.” Those are the words of DJ Khaled, impeccable man of many words, except when it comes to his closest collaborators.

Look, we all have our moments, but a line must be drawn here. How do you forget a name like Diplo? 7 billion people on the planet and only one of them is called Diplo. Not only that, but he’s your friend. The one Diplo is your friend. You’re on stage with him. He’s to your left. Maybe three feet away? And you draw a blank. Cringe for everyone involved. For Khaled, for us, and most importantly, Diplo. 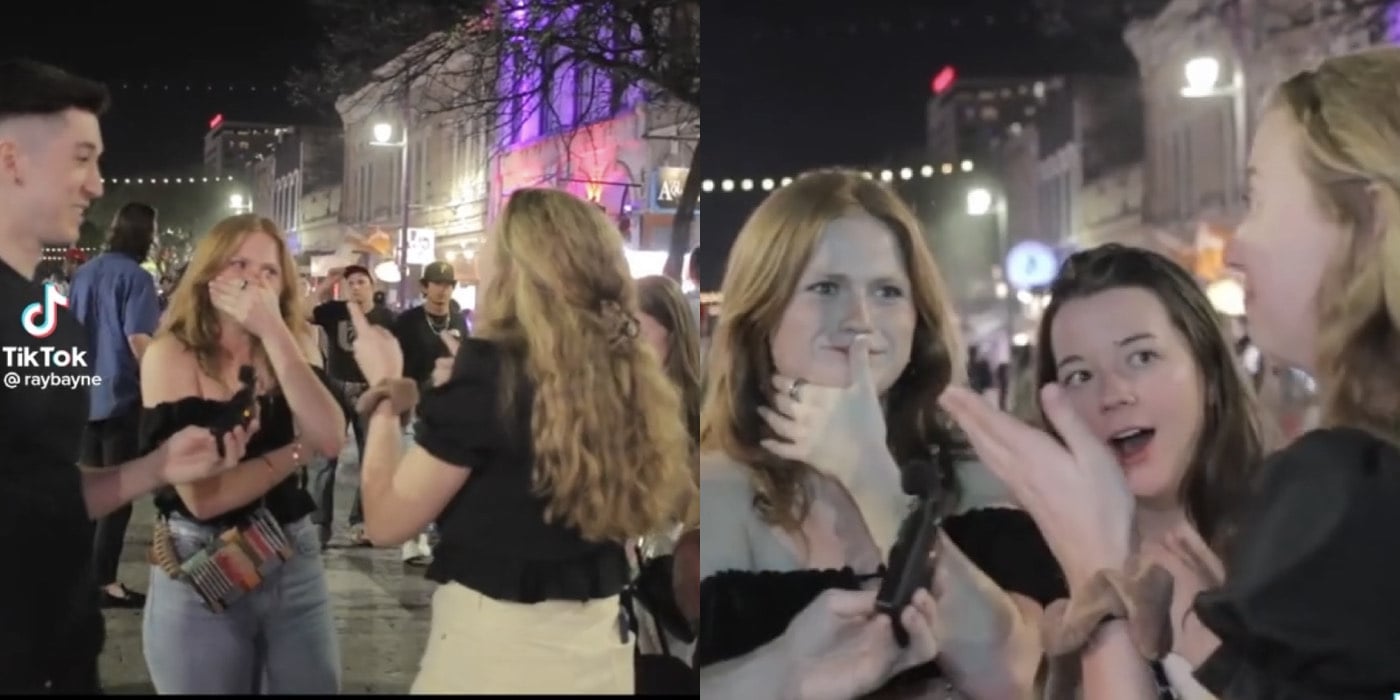 Nightlife vox pops make for great content. Catching people at their drunkest is to catch them at their most honest. These people were always out there, stumbling, cackling, ready to spitball about any topic thrown their way. They just didn’t have a platform until a bunch of content creator guys went out there with a camera, microphone and series of hot questions.

That’s what makes this particular snippet so shocking. The three girls involved seem normal. Encouraged to share secrets they’ve kept from each other, one girl says to the other that when they were kids, she stole her earrings. The other girl can’t believe it! You did WHAT! But it’s still fluffy. It’s faux outrage if anything. Then when it’s her turn to spill the beans, she reveals in no uncertain terms that she had sex with her friend’s boyfriend two years ago. What?

That One Really Hurt 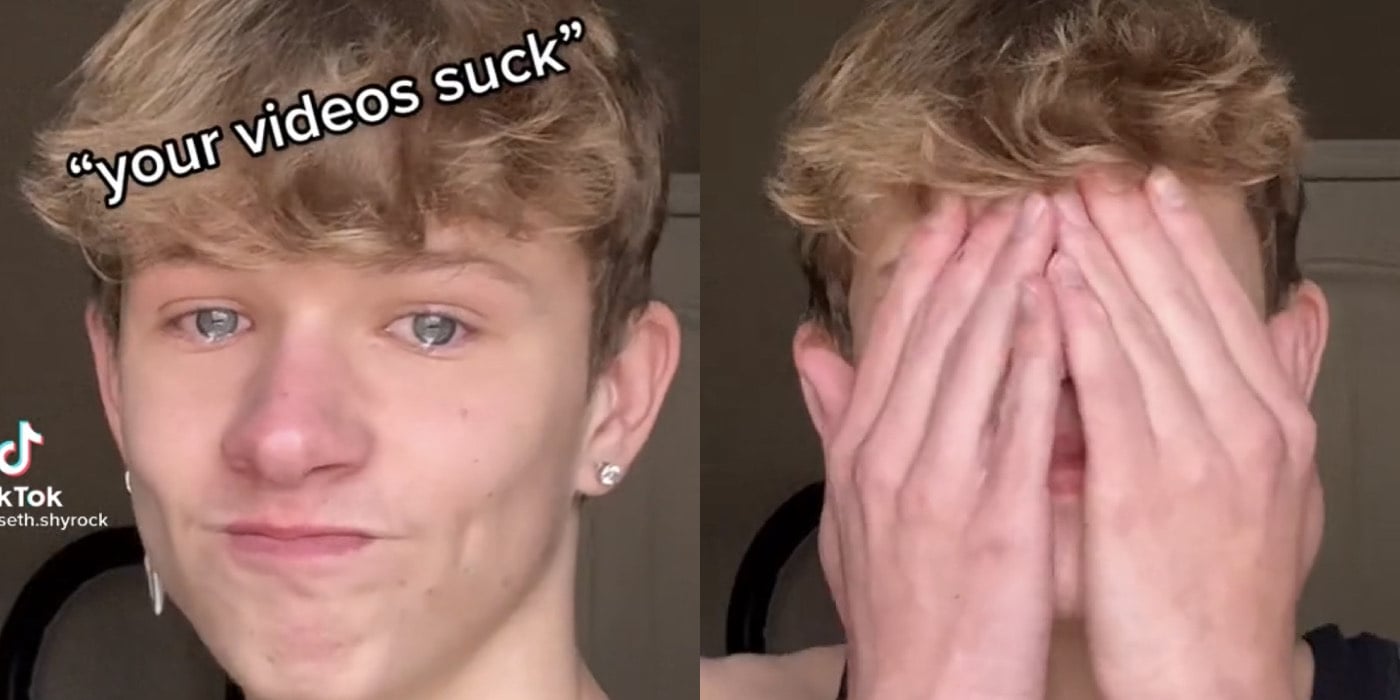 This one really hurts. Look, nobody’s condoning or downplaying the impact of online hate but you have to question how serious and deep a person pretending to cry and miming Bart Simpson dialogue can take their own mental health.

Here, the TikToker fends off and even agrees with several examples of troll comments only to be undone by a violent threat. Heavy themes, ludicrous execution. 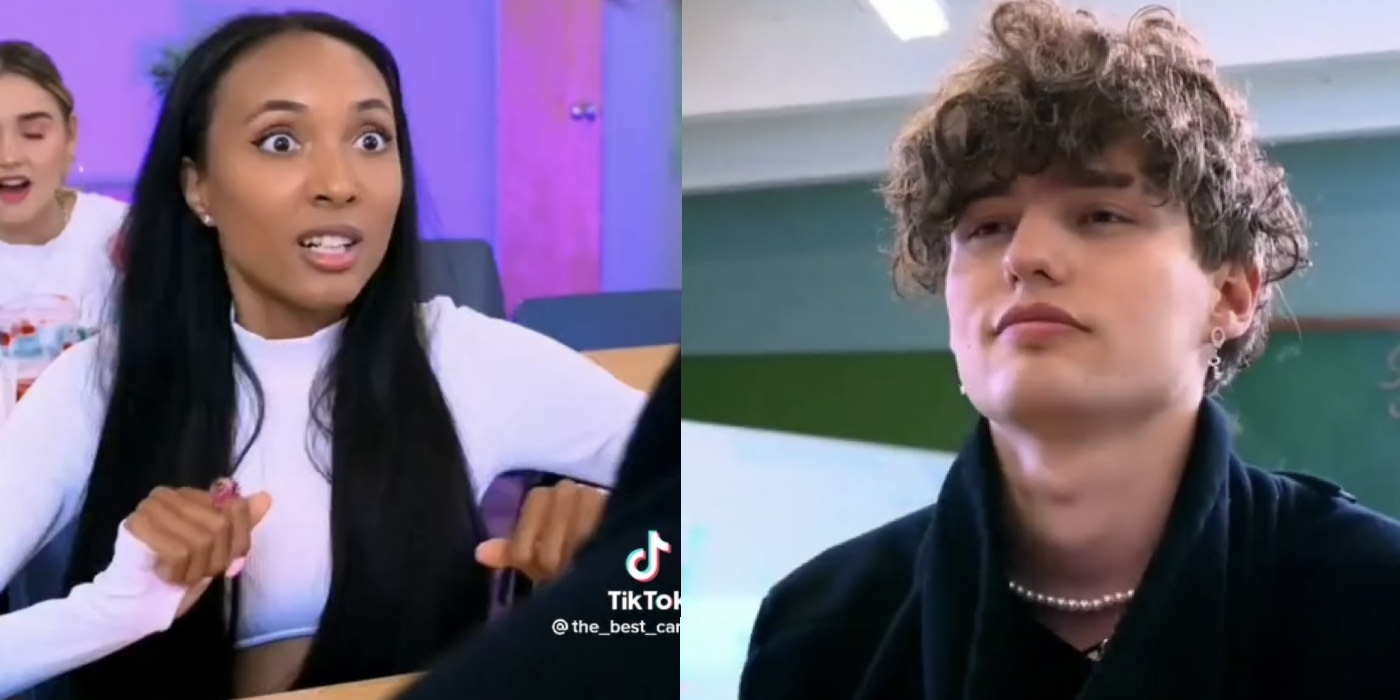 This video, like the e-boy being walked into a prison cell, has production value. This cringe has gone to some lengths to disturb you.

Simple school throwback premise. A girl teases a boy on the desk in front of her by pulling down his hood. When the girl turns way to talk to her friend, the boy turns around and reverses his hoodie so that when the girl goes to pull it down again, he’s staring right at her. The girl, who has in theory seen this boys face before without giving it a second thought, is now overwhelmed with butterflies when confronted in such a surprising way.

“What if we met at the red light?” 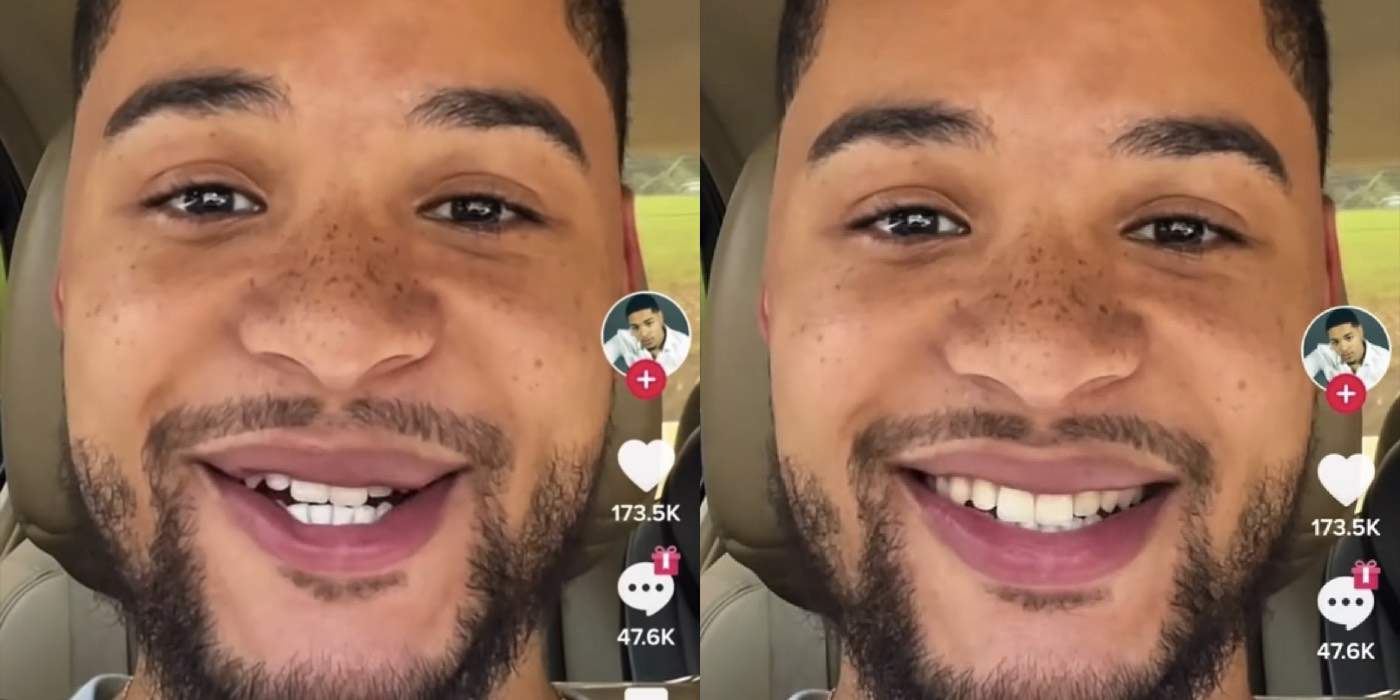 Common theme here. We’ve all exchanged glances with other drivers/passengers while waiting at a red light. 99.9% it’s brief and embarrassing. With this guy? A ripe opportunity to communicate the fact you are clinically insane to strange women.

“What would you do if you saw me at the red light,” the man says, positioned way too close to the camera, “and we made eye contact and I said to you…” What follows is a suggestive and deeply horrifying moistening of the lips. And then, the clincher: “What’s up baby girl?” Women of the world, listen to me. Do not be fooled by this behaviour. Drive. Drive as fast as you can away from this man. Run a red light if you have to. The penalty will be worth the long-term safety.