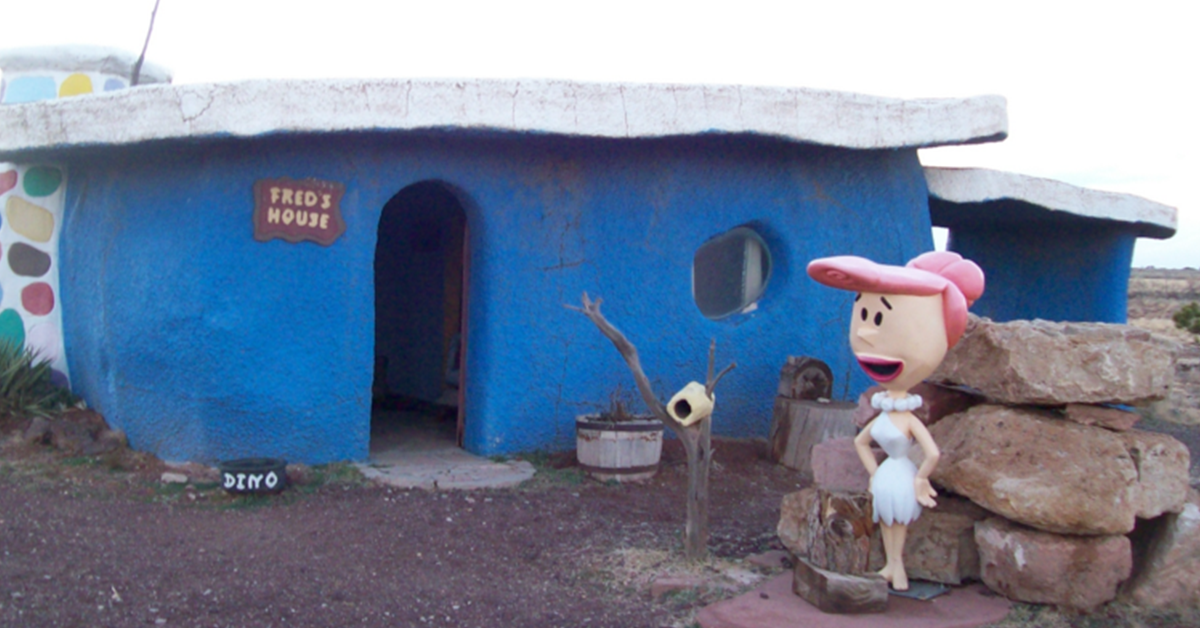 This is a highway 66 roadside attraction like no other – this town in Arizona has been modelled after Bedrock from The Flinstones. If you remember that classic cartoon about the stone age family, you’ll either love this or find it weirdly eerie now that this 40 year old amusement park is almost empty.

There’s still some staff hanging around, but it really does look like a ghost town before time. Visitors may not have long left to see Bedrock City, as it only attracts a handful of people now, and the park may have to close for good. Until then, though, the park is open all year round. You too can slide down a massive dinosaur, just like Fred did. Visitors can enjoy the multi-coloured city and even take selfies with their favourites from the show. Here’s Barney and Betty Rubble’s house, for instance: The interior is exactly the same as on the show: A train was offered to visitors to explore the park in – instead of foot pedalling. That’s far less effort! Even the record player is in there! Continued on the next page

This is the Bedrocy grocery store, where you can take a stroll through and pretend you’re scouring the aisles for some prehistoric snacks. The shelves are indeed stocked up with foods that are apparently from ancient times… Gotta have some cactus juice in the morning! There’s even a barber shop – it’s not actually used for anything, but you can still pretend you’re getting a haircut in the stone age. The Bedrock Theatre shows The Flinstones, and has been showing it on repeat for more than 40 years! Continued on the next page

You can learn all you need to know about prehistoric beasts in the classroom at Bedrock school! There’s also a yellow school bus outside the school building: With so many houses to explore, this park is the size of a small town! Visitors can even park their RV’s if they wanted to do some prehistoric camping. And last but not least: the Post Office! They just don’t deliver parcels by pterodactyl anymore… What a strange and interesting place! If you plan to visit while it’s still there, there’s even a gift shop, which is everyone’s favourite part of exploring places. All images from Wimp.