These 27 Russian Wedding Photos Will blow your mind

These 27 Russian Wedding Photos Will blow your mind 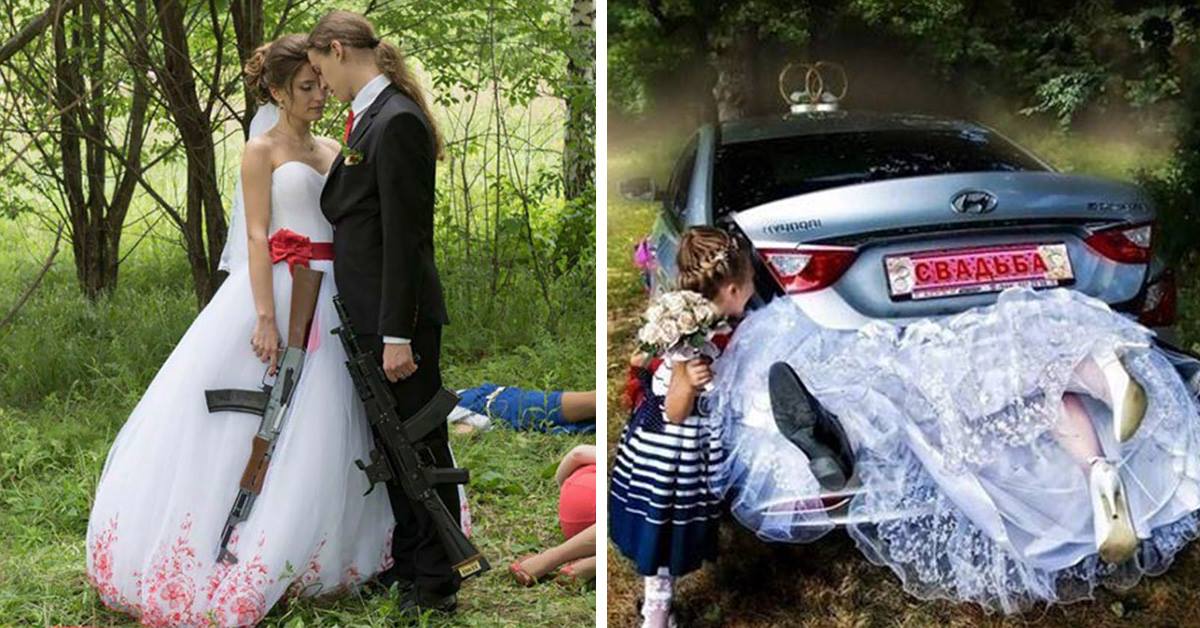 “There is no more lovely, friendly and charming relationship, communion or company than a good marriage”

… They should try being with my husband for years and see if he still thinks the same!

Good news, it’s that time of year again. Of course, you already know what i’m talking about right?

Yes it’s officially Spring and with that comes the chance for many couples to make their relationships official in the eyes of the law. It’s an opportunity for people to celebrate their love for one another in any way they see fit.

Some choose to a have a quiet ceremony on a picturesque tropical beach, others go for grand occasions with hundreds of people in a fancy setting. At the end of the day, it doesn’t matter on the location as long as it’s a happy, fun-filled day.

Then of course, there’s the pictures. Those precious moments between the bride and groom captured and placed on the mantle for all eternity to remind you of the special occasion.

Well, in Russia these couples have made sure to make their wedding photos especially memorable. It’s fair to say they take a slightly different approach to much of the western world when it comes to their romantic day. Whilst we look for the whole romance thing to shine through in each cherished memory, they seem to prefer individuality and a bit of tacky fun… in whatever form they can think of.

Take a look at these ‘different’ wedding photos and let me know what you think!

1. Releasing  raw chickens into the air

No idea. Absolutely no idea what the point of this is. But, how many people have you ever seen throw uncooked chickens in the air at a wedding? 10/10 for originality. I just hope they didn’t eat them later.

Can we also just take note of what she’s wearing… again, no freakin’ idea.

Someone’s had a few lessons in photoshop. She doesn’t look too thrilled to see him coming out the end of that bottle to be honest. Maybe she was hoping for some actual champagne.

I’m already seeing a pattern starting to emerge here. That pattern is me reacting to each photo by thinking “EH?!”. I hope she never actually took this shot, for his sake.

4. When you morph into one

I can’t tell if she’s laughing with joy or screaming in terror here. I’d hate think what’s going on under that dress, must be… sweaty.

5. When you just want some alone time

Maybe they were just desperate to escape the two families clashing on their big day. This is like an image from the end of an action thriller film.

This is one to show the grandkids. “What was your wedding day like nanna?”, “It was great, I kicked your grandfather halfway across a field because he was already starting to p*ss me off”.

7. Inappropriate isn’t a word in Russia

I don’t know where to look with this one. Maybe they were just so excited to be together that they couldn’t wait for their freakin’ honeymoon suite.

8. Love is in the air… literally

At least this happy couple has kept things romantic, rather than being odd or downright gross. So hats off to you guys for keeping it simple and just being straight up cringe instead!

9. Floating away to happy ever after

If only swans were this docile in reality eh? Anytime I’ve approached one, I’ve quickly had to sprint in the opposite direction as it chases me down the riverbed.

10. When you marry the Hulk

I like how they haven’t realised when photoshopping this that the driver kind of gives away that this isn’t real. He looks completely unfazed in the front. That’s the only thing that gives it away though obviously..

A photo capturing the pair lost in a beautiful moment. Unfortunately I think only they’ll know why they decided to depict that moment in this way.

13. When it’s too difficult to pick just one favourite photo

I just have absolutely no idea what’s meant to be going on here.

14. You can marry me, just rescue me first

I thought that dragon was real for a second there. A testament to the absolutely phenomenal special effects on show here…

15. When you want to give your daughter away… but you’re a borrower

This seems perfectly acceptable. If I had one piece of constructive criticism it would be the flames… they’re just not err, good?

Having your wedding photos taken next to what looks like a homeless person seems like an odd idea. Perhaps he’s actually part of the wedding party and he just doesn’t own a suit.

Not the most picturesque background to shoot this in front of, excuse the pun. It’s looks like they’re having fun which is all that matters I suppose.

18. I wish you’d told me you were pregnant before we got married!

They must have only just heard of Cabbage Patch Kids over in Russia.

This might have been more dramatic if they were actually in the sea. Because, as far as i’m aware, sharks haven’t grown legs and thus the ability to walk on land yet.  At least he’s in causal jeans to make running away that bit easier.

When you agree on no sex before marriage but you get desperate to see what he’s packing.

I just want to be a fly on the wall when these people are thinking up these ideas.

22. Riding the waves of love

This is some pretty out there stuff, even for Russian wedding photographers. But, I suppose these are the lengths you’ve got to go to, to stand out these days.

This couple clearly wanted it to seem like all of their dreams had come true. I mean, who am I to say that the car in the photo isn’t real. You could easily fit it through those doors…

A cross-breed of a llama and a cow. There’s a bucket on its back. I’m struggling to find the right words here…

“Here’s my mini-me so that wherever you go, I can be right there with you”, “er thanks”

It’s like the photographer for all these wedding pictures is the same person who has just discovered photoshop. And boy is he having a field day!

Ok, this is just straight-up ridiculous. Someone explain this to me, please?

Russians certainly know how to come up with original wedding photo ideas, even if the authenticity of their photoshop skills leaves a lot to be desired. Thinking about it, there not photos anyone’s going to forget in a while so there may be method to their madness. I think the rest of the world might just stick to the old-fashioned approach though. You know what they say: if it ain’t broke…

Let me know what you think in the comments!